Links to this page can be found in Book 1.

At the end of his book of etchings which showed the gates of Rome, Giuseppe Vasi added a sketch of the walls of Rome and of some other landmarks of the city. 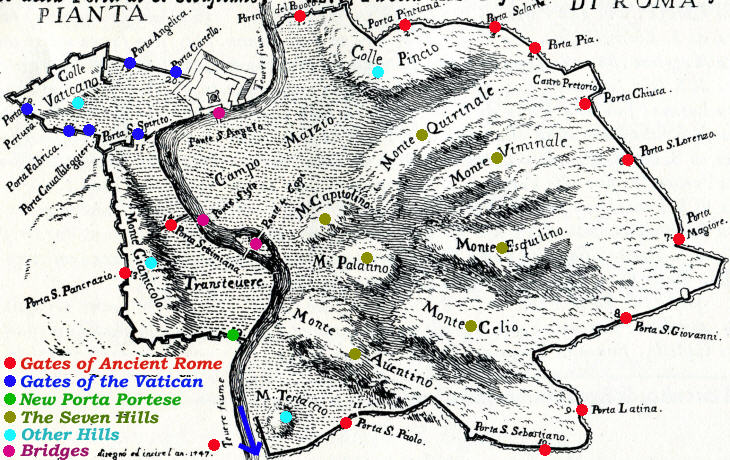 This circuit will bring into view specimens of every construction from the days of Servius Tullius down to the present; for, to save expense, Aurelian took into his walls whatever he found standing in their line; and they now include some remains of the Tullian wall, the wall of the Praetorian barracks, the facing of a bank, aqueducts, sepulchral monuments, a menagery, an amphitheatre, a pyramid. Thus do they exhibit the uncemented blocks of the Etruscan style, the reticular work of the republic, the travertine preferred by the first emperors, the alternate tufo and brick employed by their successors, and that poverty of materials which marks the declining empire. (..) Since the first dreadful breach made by Totila, the walls have been often and variously repaired; sometimes by a case of brick-work filled up with shattered marbles, rubble, shard, and mortar; in some parts the cementitious work is unfaced: here you find stone and tufo mixt in the "opus incertum" there, tufo alone laid in the Saracenic manner: the latter repairs bear the brick refinement of modern fortification.
Joseph Forsyth - Remarks on Antiquities, Arts, and Letters in Italy in 1802-1803
Rome was founded on April 21, 753 BC by Romulus on the Palatine Hill. The initial settlement over time expanded on the other six hills near the Palatine. Rome had walls surrounding the seven hills (called Servian Walls), but with the expansion of the Roman Empire they were not maintained. In 275 AD Emperor Aurelian built new walls which included also a section of the city on the right bank of the river (Trastevere).
The walls around the Vatican were initially built in the IXth century and they were almost entirely rebuilt in the second half of the XVIth century by Pope Paul III and by Pope Pius IV; they included Castel Sant'Angelo. In the first half of the XVIIth century Pope Urban VIII built walls on Monte Gianicolo and redesigned the walls of Aurelian in Trastevere.
The image shown in the background of this page is based on a photo of the walls between Porta S. Sebastiano and Porta S. Paolo.

You have completed Book 1! Move to Book 2: Piazza del Popolo.