Trastevere is a corruption of trans Tiberim (beyond the Tiber). Ancient Rome was founded on seven hills located on the left bank of the Tiber. The right bank (trans Tiberim) belonged to the Etruscans and most likely to the town of Veius (today Isola Farnese). A famous episode of early Roman history makes reference to the defence of Rome which took place on the timber bridge which crossed the river (Ponte Sublicio). Only after the defeat of Veius and the expansion of the Roman rule to most of Central Italy did the right bank of the river become an area of stable Roman settlements. However only in 275 AD Trastevere was included by the emperor Aureliamus in the pomerium (the city border) of Rome and it was protected by walls. In the XVIIth century Pope Urban VIII redesigned the borders of Trastevere by building new walls which included in the rione most of the Janiculum hill.
Trastevere borders to the north on Rione Borgo, to the east on the Tiber, to the south and the west on the walls of Rome. In the XVIIIth century the area near the river was highly populated while the Janiculum was split into several villas.
For a map of the Roman quarters (Rioni) click here - it opens in another window. Coat of arms of Rione Trastevere

The symbol of Rione Regola is a rampant golden hind. According to a legend, after a flood, a golden head of a hind was found on the beach of Regola.
The symbol of Rione Trastevere is a lion's head.
Trastevere does not have imposing ruins of ancient Rome: at that time its inhabitants were mainly foreigners: ruins of a Syrian temple have been found in Villa Sciarra; traces of a sanctuary dedicated to the mysterious cult of Bona Dea have been found near S. Giovanni Battista dei Genovesi. The Roman walls are almost completely lost. In the XIXth century the excavation of Roman barracks near S. Grisogono showed that in the past the level of the ground near the river was some 20 ft lower than it is today.
Medieval Trastevere can still be found in the streets near S. Benedetto in Piscinula. The main church of Trastevere, S. Maria in Trastevere has fine medieval mosaics. One of the jewels of the Renaissance can be found in Tempietto del Bramante in S. Pietro in Montorio. In the early XVIIth century Trastevere got once again an ample supply of water. Pope Paul V reactivated an ancient Roman aqueduct. The fountain built to celebrate this achievement (Mostra dell'Acqua Paola) is the most imposing monument of Trastevere. Palazzo Corsini and its gardens are the most interesting XVIIIth century addition to the rione.

In today's Rome the sense of belonging to a certain rione has since long disappeared: less than 5% of today's inhabitants of Rome live in the 14 historical rioni, but Trastevere is no doubt an exception. Its inhabitants believe to be "Romani de' Roma", true Romans and many associations try to keep alive old traditions including a yearly fair (La Festa de' Noantri). That's why many shops show the symbol of the rione. 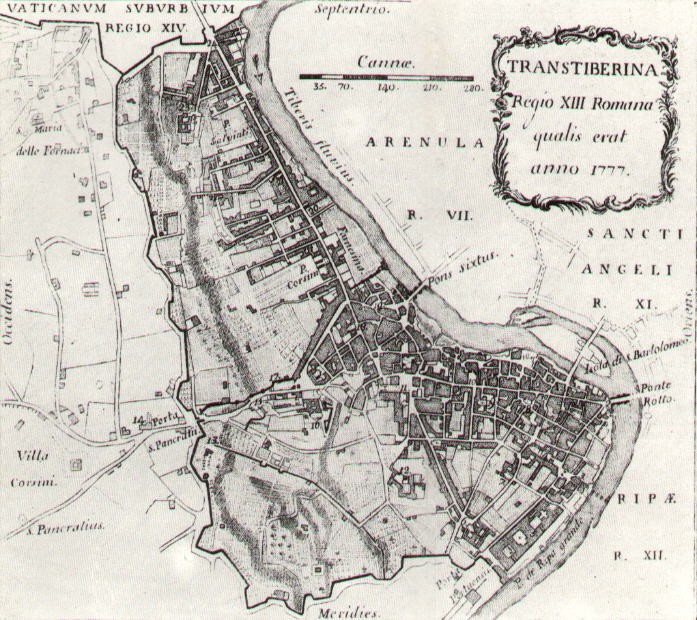 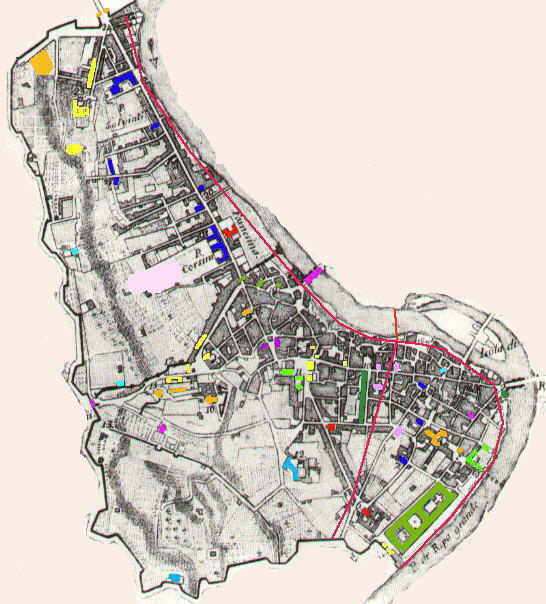 The red lines in the map show the major changes which occurred after 1777:
a) the long line along the river shows the redesign of the bank in the 1880s: this led to the loss of some churches in Via della Lungara, of most of Giardino Farnese and of S. Salvatore a Ponte Rotto;
b) line across the river and into Trastevere: in 1887 a new bridge (Ponte Garibaldi) and a large avenue (today Viale Trastevere) created a new traffic axis which cut the rione into two parts.
The different colours group the monuments which are shown in the same page.