Borgo is a corruption of the German word burg (E. borough) which was used to identify the Saxon burg a complex of buildings (church, hospice, hospital) in the area now occupied by S. Spirito in Sassia: also the streets of this district were called borgo. The borders of Borgo were first established by Pope Leo IV who in 848-852 built walls around the Vatican hill and from there towards the river and Castel Sant'Angelo. Borgo was then called Città Leonina in honour of the pope.
In 1527 Borgo was sacked by the troops of Emperor Charles V. This event led the popes to the decision of building new walls able to resist artillery: the new walls were almost completed by Pope Pius IV in 1563 and they included an additional area (Borgo Pio) to the north of the old walls.
Borgo was then regarded as a separate city with its governor, police and tribunal although for other aspects it was just an extension of Ponte. In 1586 Pope Sixtus V "promoted" Borgo which became the fourteenth rione of Rome and he also gave to the new rione a coat of arms to a great extent similar to his own coat of arms. 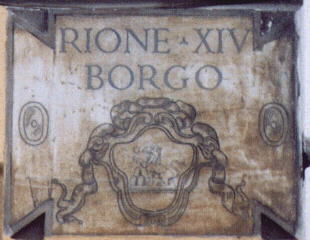 Coat of arms of Rione Borgo

The symbol of Rione Borgo shows a lion, three mountains and a star, all elements of the coat of arms of Sixtus V.
Borgo was outside the city of Rome and therefore Emperor Hadrian could build there his Mausoleum (now Castel Sant'Angelo), the most imposing ancient monument of the Rione with the bridge built by the same Emperor. The obelisk now in Piazza S. Pietro was located at the centre of a nearby circus initiated by Emperor Caligula and completed by Emperor Nero; another Roman monument (lost) was a tomb similar to Piramide di Caio Cestio and called in the Middle Ages Meta Romuli, as it was thought to be the tomb of the first Roman king.
The history of Borgo is to a great extent the history of Basilica di S. Pietro, founded in the IVth century and which soon attracted pilgrims from all over Europe. But of its medieval past Borgo retains very little because in the early XVIth century the popes decided to build a new basilica and in a process which lasted some 150 years they gave to the Rione a Renaissance/Baroque appearance. In addition to the new basilica, the walls, the churches of S. Maria in Transpontina and S. Spirito in Sassia, the papal residences of Palazzo del Belvedere and Casino Pontificio and finally Palazzo Giraud all belong to this period.

Palazzo del Belvedere and the corridors which link it with Palazzo Apostolico, the current residence of the pope, house Musei Vaticani, a museum where the building itself with all its frescoes and decorations is an extraordinary work of art. The ecstatic angels of Ponte S. Angelo were meant as a spiritual introduction to S. Pietro. A modern fountain near Porta Castello is a reminder of the military role of Castel Sant'Angelo. 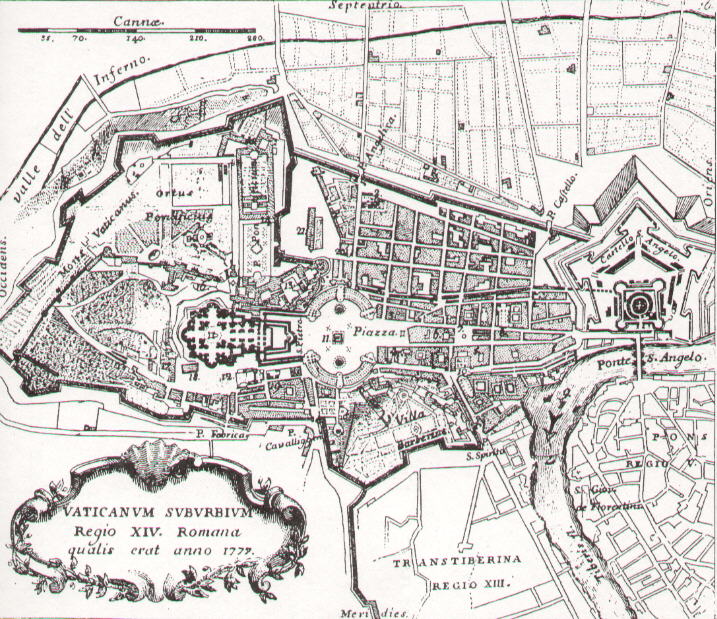 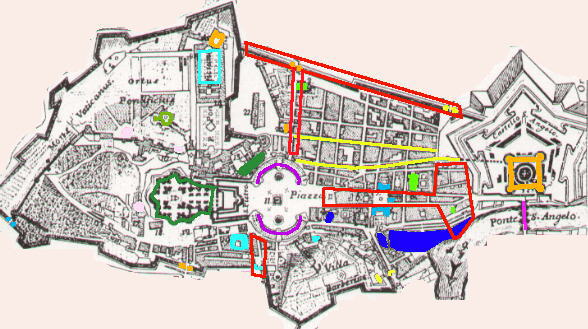 The areas within the red lines in the map show the major changes which occurred after 1777:
a) upper part of the map: the walls from Porta Angelica to Castel Sant'Angelo were pulled down at various moments together with several buildings from Porta Angelica to the walls of Passetto;
b) central part of the map: in a process started in the 1930s and completed in 1950 a new large avenue replaced Spina di Borgo, a string of buildings in the heart of the rione with the loss of S. Giacomo a Scossacavalli;
c) lower part of the map: in 1904 the buildings between Colonnato di S. Pietro and Porta Cavalleggeri (included) were pulled down to allow direct access to Borgo from the new quarters of Rome behind the Vatican hill.
The different colours group the monuments which are shown in the same page.

The image used as background for the table shows a heraldic symbol of Pope Sixtus V in Piazza S. Pietro.
You can have a tour of Rione Borgo by following the itinerary (Day 8) suggested by Giuseppe Vasi: first step Ponte Sant'Angelo.