- I - Rione Monti
(coat of arms of Rione Sant'Eustachio)

Rione Monti is named after the three hills (in today's Italian colle, collina, but in the past they were referred to as monte) it includes: Quirinale (eastern side), Viminale and Esquilino. It borders to the west on Trevi and to the south on Campitelli: to the north and the east it is closed by the walls of Rome. It is the largest rione in size, but in the XVIIIth century it was scarcely populated. 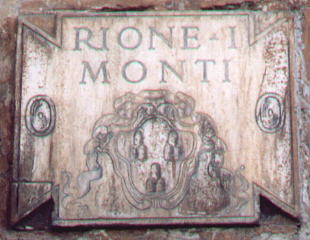 Coat of arms of Rione Monti

The symbol of Rione Monti reminds us of its three hills.
The southern part of Rione Monti near the border with Campitelli was chosen by the emperors to expand the Roman Forum. Augustus and after him Nerva and Trajan built at this location basilicas and temples: the most significant monument of this period is no doubt Colonna Traiana. The rest of the rione was mainly occupied by villas such as Nero's Domus Aurea. The proximity with Colosseo (in Rione Campitelli) led to building imposing baths on the nearby slope of the Esquilino hill (Terme di Traiano). Only in the late IIIrd century Rome expanded on the northern part of Monti: Diocleziano built very large baths on a flat area at the top of Quirinale and Viminale, while a few years later Constantine built other baths in what today is Palazzo Rospigliosi.
With the loss of a stable water supply caused by the destruction of large sections of the aqueducts during the war between the Byzantines and the Goths in the VIth century, most of Rione Monti was abandoned.
Maybe because of their remoteness from the centre of ancient Rome where too many temples still celebrated the pagan gods, two peripheral locations were chosen to build great Christian basilicas: S. Giovanni in Laterano, near Porta Asinaria, and S. Maria Maggiore on one of the three peaks of Esquilino.
Conditions in Rione Monti improved with Pope Pius IV (1559-1565) who opened Strada Pia leading to Porta Pia and to a greater extent with Pope Sixtus V (1585-1590) who brought again water to this part of Rome (Acqua Felice) and opened long streets which facilitated the access to the basilicas. Several monasteries and churches were built along these streets, the best known being S. Carlo alle Quattro Fontane by Francesco Borromini and S. Andrea al Quirinale by Gian Lorenzo Bernini.

With the radical changes brought about in the last 150 years Rione Monti offers today a mixture of monuments and styles which range from the imposing aqueducts of Porta Maggiore, to very old churches such as S. Clemente and SS. Quattro Coronati, to the XVIIIth century restyling of S. Croce in Gerusalemme, to some of the most interesting monuments of Roma Capitale, as the period between 1870 and 1914 is called, of which Fontana delle Naiadi is an example. 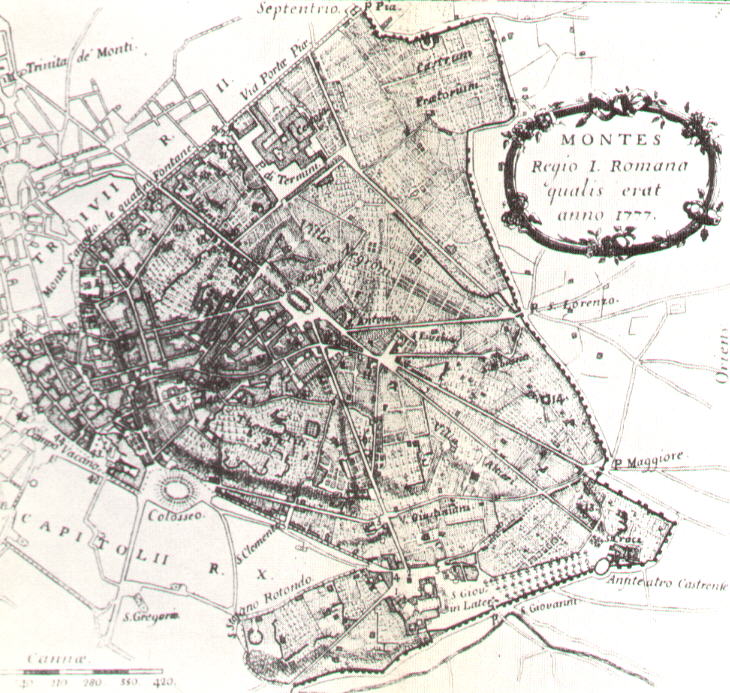 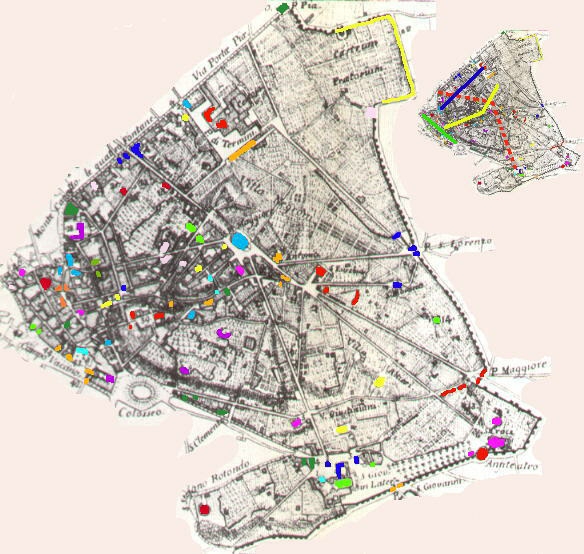 The small map shows the major changes which occurred after 1777:
a) dotted red line: all the area to the right of this line was occupied by villas and farms: after 1870 it became the preferred location for the expansion of Rome required by its new role as capital of the Italian Kingdom: only a few casinos of the former villas were spared;
b) blue line: it marks Via Nazionale a new street opened after 1870 to link Stazione Termini with Piazza Venezia;
c) yellow line: it marks Via Cavour a new street opened between 1880 and 1890 with the objective to provide an alternative access to the railway station;
d) green line: it marks Via dei Fori Imperiali a large avenue opened between 1924-1932 to provide a grand view of Colosseo from Piazza Venezia.
The different colours group the monuments which are shown in the same page (because of the scale of the map a few minor monuments were omitted).

The image used as background for the table shows a mosaic in S. Maria Maggiore.
You can start your tour of Rione Monti from Colonna Traiana.