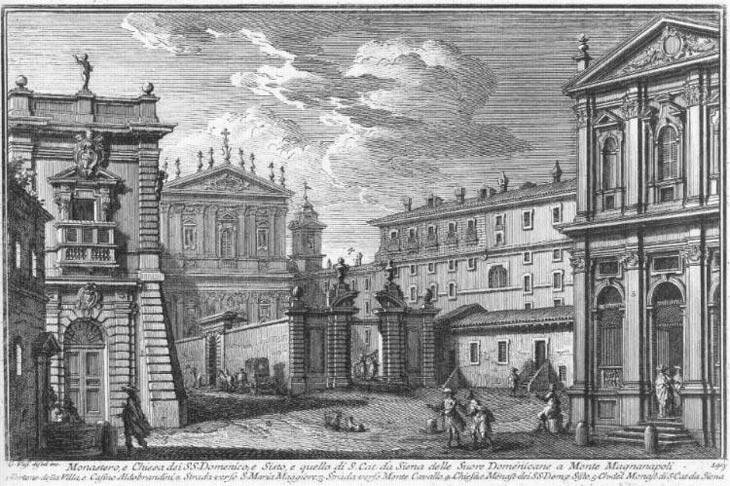 The full heading of this 1758 etching by Giuseppe Vasi makes reference also to the nunnery of S. Caterina; so the plate covers two nunneries, both belonging to the Dominican order. They were located in Monte Magnanapoli, the southern part of the Quirinal Hill which overlooked the former Forum of Trajan; the origin of Magnanapoli which literally means GreatNaples is uncertain: there are three different explanations for it:
a) the Trajan's markets at the foot of the hill were thought to have housed baths built by Pope Paul I in the VIIIth century hence balnea Pauli (Paul's baths), later on corrupted in Magnanapoli;
b) the construction of a Byzantine fortified citadel in the VIth century; this was called bannum nea polis (new military town) in a mixture of German and Latin words which eventually led to Magnanapoli;
c) the existence in the area of towers and other buildings belonging to the Colonna family; they had inscriptions with the words "Mag(nus) Neapol(itani) Regni Connestabilis" because the Colonna were Chief Constables of the Kingdom of Naples (a Spanish possession in 1503-1707) where they had many fiefdoms. The text of the inscription can be seen in Palazzina di Papa Pio IV.
The view is taken from the green dot in the 1748 map below. In the description below the plate Vasi made reference to: 1) Entrance to Villa Aldobrandini; 2) Street leading to S. Maria Maggiore (via S. Lorenzo in Panisperna); 3) Street leading to Monte Cavallo (Quirinal); 4) SS. Domenico e Sisto; 5) S. Caterina da Siena. The map shows also 6) Casino Aldobrandini Pamphilj. 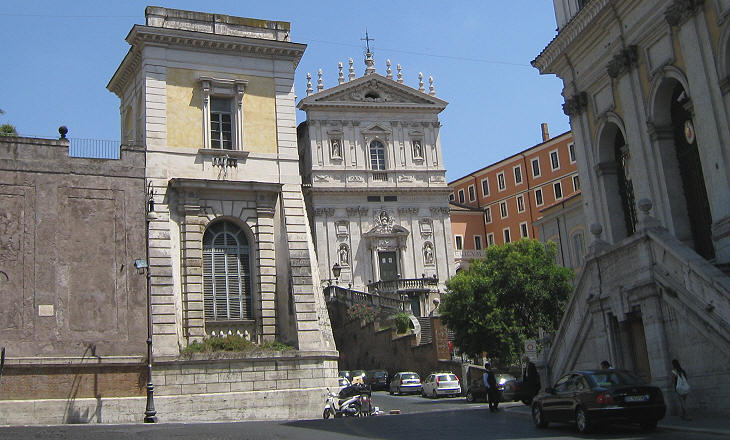 In 1876 the level of the ground in this part of Monte Magnanapoli was lowered so the former entrance to Villa Aldobrandini is today a window and a flight of steps is needed to enter S. Caterina da Siena. 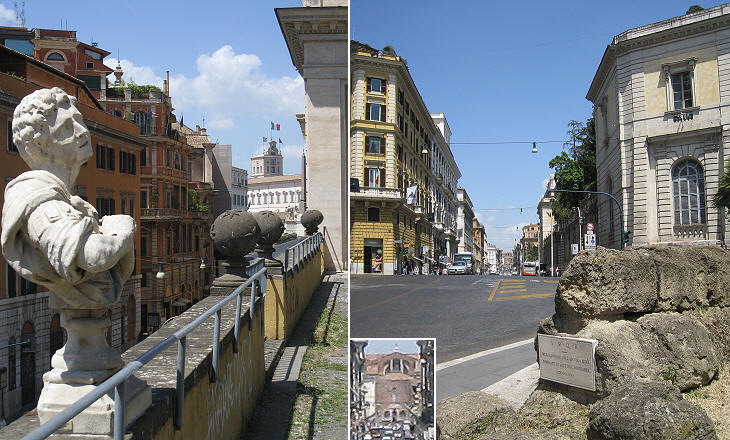 (left) Via XXIV Maggio leading to S. Silvestro and to Piazza del Quirinale (seen from Villa Aldobrandini); (right) Via Nazionale leading to Piazza di Termini (in the inset); in the foreground a section of the Servian Walls of Rome which was unearthed in 1875

The lowering of the ground was required by the opening of Via Nazionale, a new street linking Stazione Termini, the central railway station with Piazza di Venezia. "Omnibus" (for all) a horse-drawn vehicle which was the first public transportation system introduced in Rome required a limited inclination of the street and for this reason the ground was raised or lowered at several points along Via Nazionale (see S. Vitale for an example of raised ground). The street leading to Piazza del Quirinale which already existed at the time of Vasi was lowered and enlarged (now Via XXIV Maggio).

The construction of the church spanned almost a century from 1569 when Pope Pius V, a Dominican himself, funded the purchase of the land, to 1664, when the elegant staircase was completed. The church and the adjoining nunnery were meant to be a new residence for the nuns of S. Sisto Vecchio which was situated in an unhealthy location. Pope Gregory XIII promoted the restoration of the old nunnery, thus slowing the construction of the new one. Work resumed in 1609 and the building was completed by Vincenzo Della Greca and his son Felice. 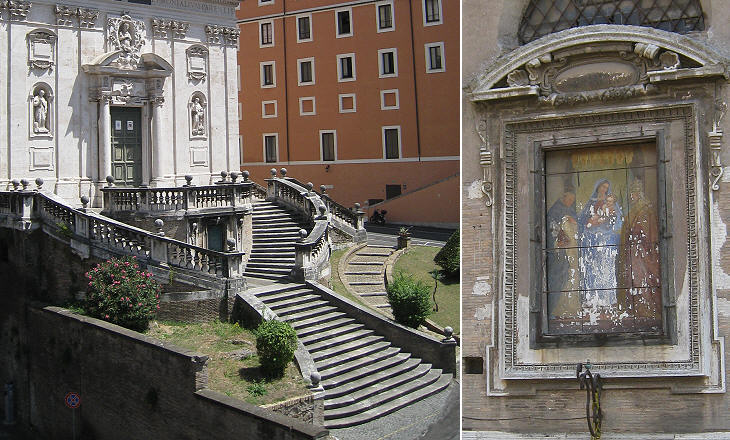 (left) The staircase leading to the church seen from Villa Aldobrandini; (right) sacred image on the left wall of the church showing the Virgin Mary between St. Dominic and Pope St. Sixtus II (see a page on the sacred images in the streets of Rome)

The curved design of the flights of steps leading to the church is due to Felice della Greca. It was unusual for a church, but it had already been adopted for suburban villas and in particular at Villa Sacchetti. It eventually characterized Porto di Ripetta and Scalinata di Trinità dei Monti. (left) Statue of St. Sixtus II who was Pope between 115-125, but was portrayed by Marco Antonio Canini in XVIIth century attire; (centre) detail of the tympanum designed by Vincenzo Della Greca and showing the influence of Francesco Borromini in the use of angels as architectonic elements; (right) bell tower (late XVIth century, perhaps designed by Giacomo della Porta)

The Dominicans or Black Friars have a dog with a torch as a symbol of their order, with reference to Dominicanus = Dominus Canis (Dog of the Lord); the image used as background for this page is based on a relief in the portal of the church. 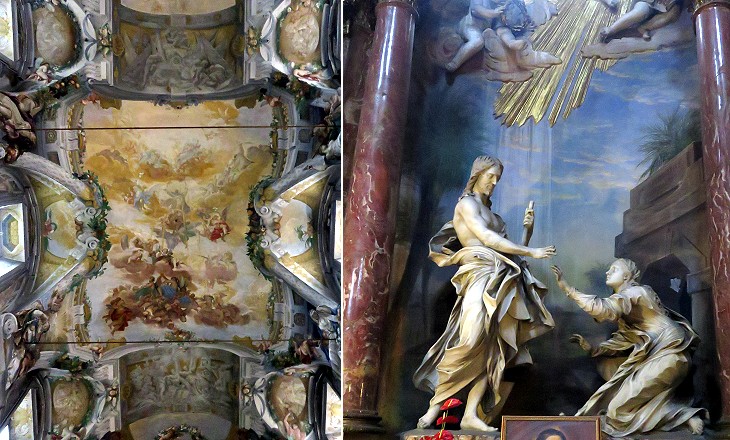 When Domenico Maria Canuti, a painter from Bologna, began working at the ceiling of the church, Baciccio was already working at that of il Gesù. Their frescoes show similarities as they both have a light and a dark section. Canuti with the help of the Haffner brothers framed the central scene inside a quadratura, an illusionistic architecture. This type of ceilings will reach perfection in 1691-1694 with The Glory of St. Ignace at S. Ignazio by Andrea Pozzo.
Gian Lorenzo Bernini often masterminded the decoration of chapels, although he was not directly involved in executing them. Antonio Raggi belonged to his inner circle. The statues show Mary Magdalene recognizing Jesus Christ after his Resurrection and being told not to tread on him. The painted background depicting a sepulchre was not in the original design of the altar, which, similar to what can be seen in another altar by Raggi at S. Giovanni dei Fiorentini, should have been decorated with marbles and reliefs. 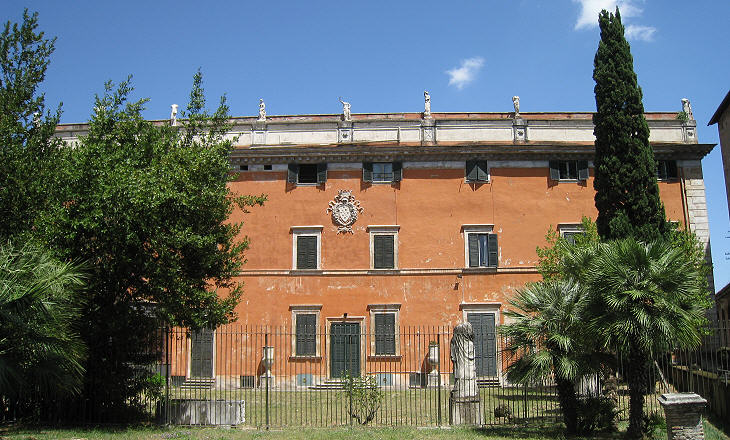 In 1587 the completion of Acqua Felice, a new aqueduct, with a monumental fountain on the Quirinal, greatly increased the interest for this hill which was close to Papal Rome. In 1600 Pope Clement VIII bought a small casino surrounded by a large piece of land in Magnanapoli, which he passed on to his nephew Cardinal Pietro Aldobrandini. The main building was redesigned by Carlo Lambardi. 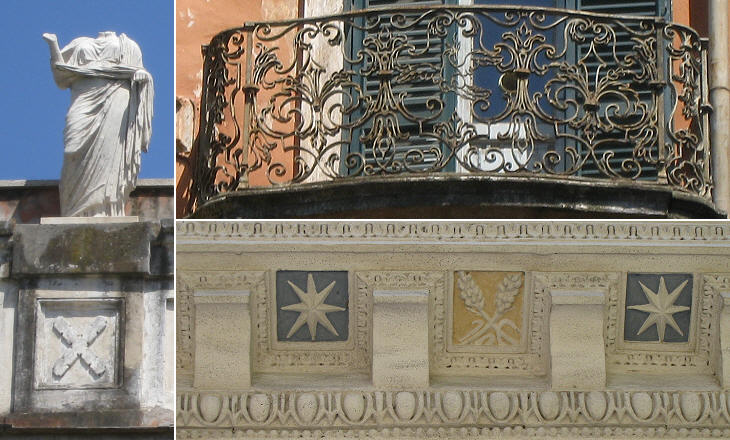 The coat of arms of Pope Clement VIII shown in the plate is lost, but the heraldic symbols (stars and stripes) of the Aldobrandini are still noticeable in many parts of the gardens and on the many globes of their balustrades. However the balconies of the main building show the dove of the Pamphilj: Donna Olimpia, the last of the Aldobrandini, married first Paolo Borghese and then Camillo Pamphilj. 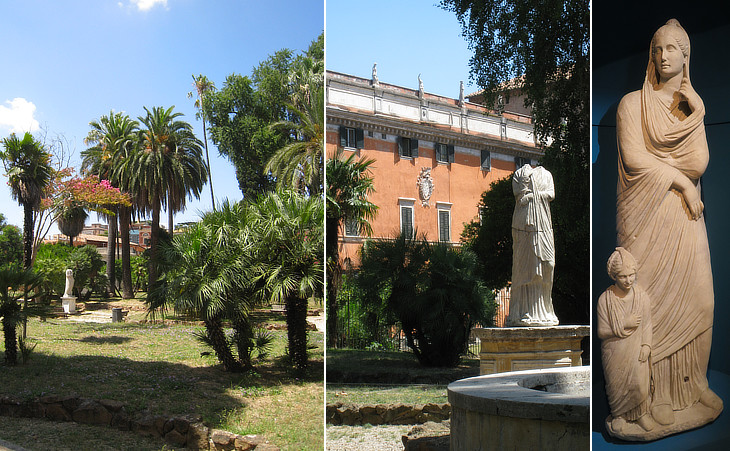 Views of the gardens

Because of the opening of Via Nazionale and in general of the development of the area after 1870, the gardens of Villa Aldobrandini were reduced to a fraction of their original size. They are now open to the public, but they no longer retain most of the statues and the many fountains which decorated them. 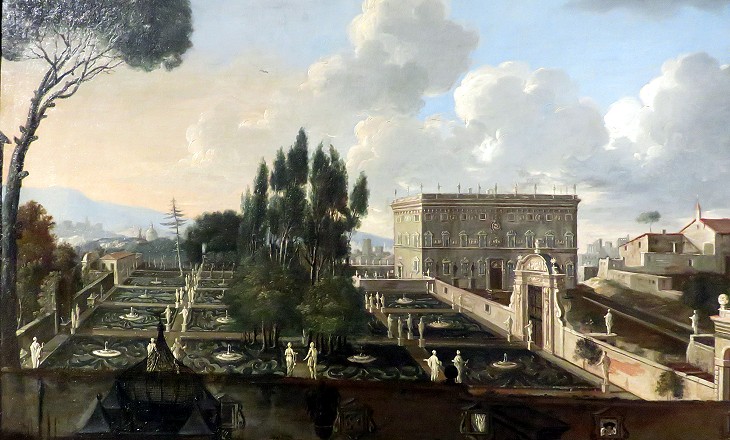 Going up the hill I came to the Pallace and Garden of Aldobrandini. The house is but little, yet neatly furnished with Statues and Pictures. (..) An old Picture made in the time of the Pagans, representing a Marriage after the old Roman fashion. I take this to be the ancientest Picture in Rome.
Richard Lassels' The Voyage of Italy, or a Compleat Journey through Italy in ca 1668
You may wish to see the Aldobrandini Marriage, an ancient Roman fresco which was at Villa Aldobrandini. 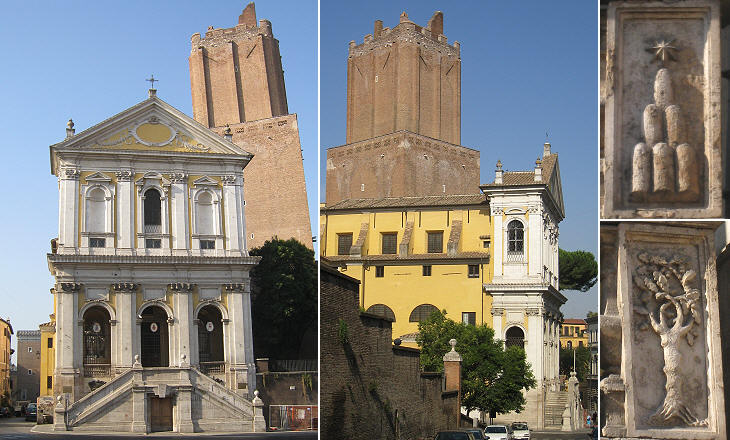 (left) Façade; at the end of the street to the left of the church Palazzo del Marchese del Grillo and, behind the church, Torre delle Milizie (its leaning was caused by the lowering of the ground for the opening of Via Nazionale); (centre) lateral view of the church; (right) heraldic symbols of Pope Alexander VII

Pope Gregory XIII promoted the construction of this Dominican nunnery by making a donation but it was not until 1608 that the actual construction started under the patronage of Cardinal Scipione Borghese; Giovanni Battista Soria, an architect who worked for the cardinal at S. Grisogono, S. Gregorio al Celio and at S. Maria della Vittoria designed the façade. Because the Borghese heraldic symbols (eagles and dragons) do not appear on it, most likely the façade was slightly modified during the pontificate of Pope Alexander VII whose heraldic symbols were placed on the balustrades of the portico. 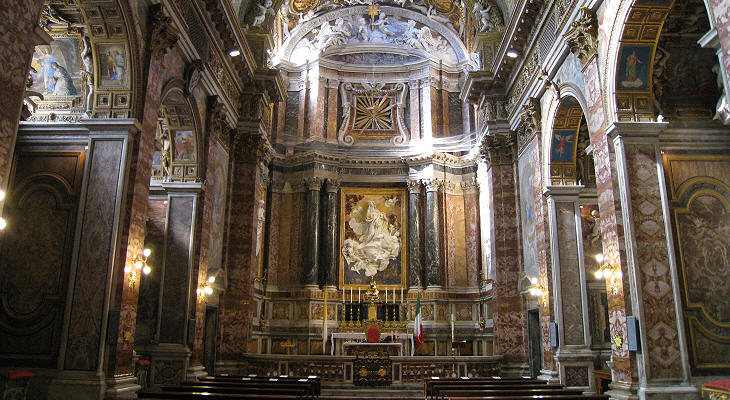 Interior of the church with St. Catherine in Ecstasy by Melchiorre Caffà

St. Catherine, in mistic exaltation, is carried heavenwards on clouds supported by angels. (..) The thaumaturgic character of the mystery has been emphasized by contrasting the white marble of the saint and her angelic companions with the multicoloured marble background.
Rudolf Wittkower - Art and Architecture in Italy 1600-1750 Penguin Books 1958
The church has a very richly decorated interior: in other pages of this web site you can see its apse, its cantoria and the monuments to Giuseppe Bonanni and his wife by Giuliano Finelli. 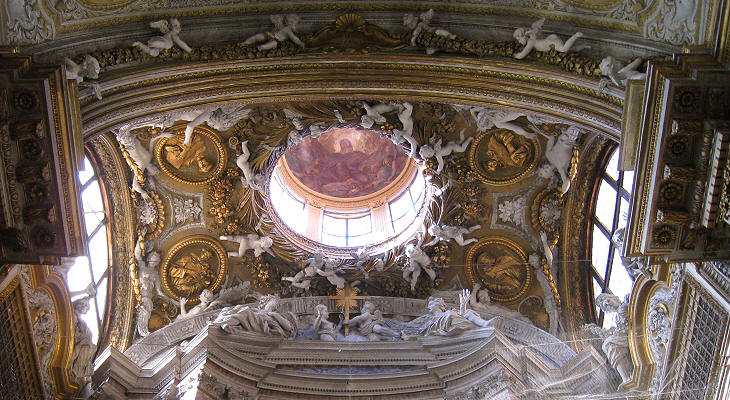 Higher up the sky opens (i.e. in the lantern), and a crowd of angels and putti play in the heavenly light, out of which the Trinity floats down in a radiant glory to receive the same. (..) No other work is so close in spirit to Bernini's St. Teresa. Wittkower Ceiling of the nave: Glory of St. Catherine by Luigi Garzi (1700-1712) (see other paintings by Garzi at S. Paolo alla Regola)

In the early XVIIIth century artists moved away from what was regarded as being excessively theatrical in the works of Bernini and Baciccio. Luigi Garzi painted an illusionistic ceiling without an actual illusionistic effect because the gilded frame around the main fresco separates it from the fake architectures linking the ceiling to the nave walls. 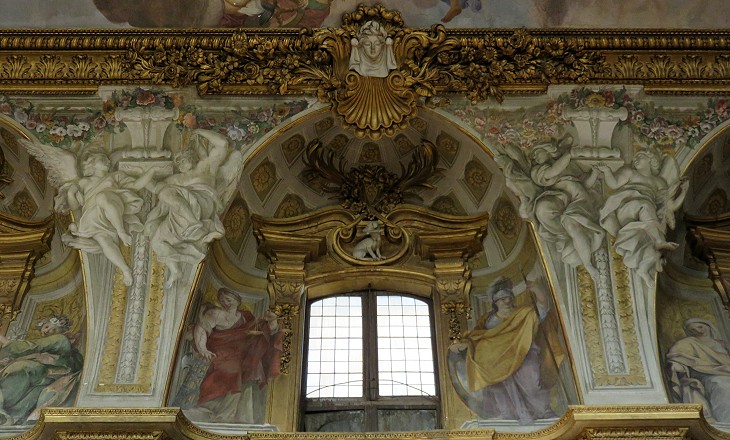 Detail of the ceiling lower part

The decoration of the church took more than a century, but overall it is consistent in its richness. Not all the details can be attributed with certainty to a specific architect or painter.