The use of marble or bronze reliefs in the decoration of doors, monuments, fountains, façades of palaces and churches was widespread in XVIIth century Rome and it was based on both Classic (Colonna Traiana and many sarcophagi) and Renaissance (Ghirlandaio, Donatello) models. The fact however that Michelangelo, who was regarded as the supreme sculptor, had used reliefs only in some early works, relegated this kind of sculpture to the level of a minor art. Gian Lorenzo Bernini shared this view and his reliefs or reliefs designed by him and executed by others had an ancillary role in a more complex work of art (e.g. in Cappella Raimondi). 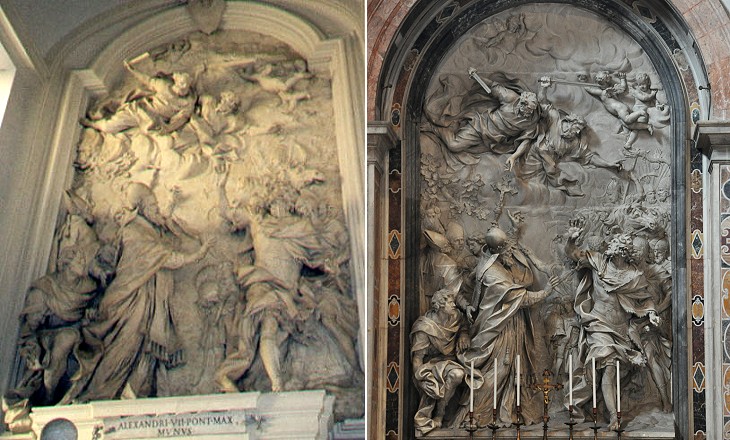 During the last fifteen years of his life Algardi had to cope with numerous and extensive commissions; and, after Bernini's, his reputation as a sculptor had no equal between about 1635 and his death in 1654. At the beginning of Innocent X's reign, at a time when the greater man was temporarily out of favour, he even stepped into Bernini's place.
Rudolf Wittkower - Art and Architecture in Italy 1600-1750 Penguin Books 1958
This general view was shaken by Alessandro Algardi in 1646 when he prepared a stucco model for a relief to be placed on an altar in S. Pietro. For that altar Guido Reni had been commissioned a painting showing Pope Leo I repulsing Attila, King of the Huns. Guido Reni was commissioned other paintings and did not go ahead with this commission. Cavalier d'Arpino, who got the commission after Guido Reni, died having only designed some initial sketches. In 1646 Pope Innocent X assigned the commission to Algardi whose work was immediately highly praised and considered a new kind of work of art: the "marble painting".
Algardi split the scene into three parts: the Pope and his cortege, Attila and the Huns and above them St. Peter and St. Paul descending with their swords from heaven. The Pope and Attila are fully three-dimensional statues, while the other characters have more or less relief to give a sense of depth. 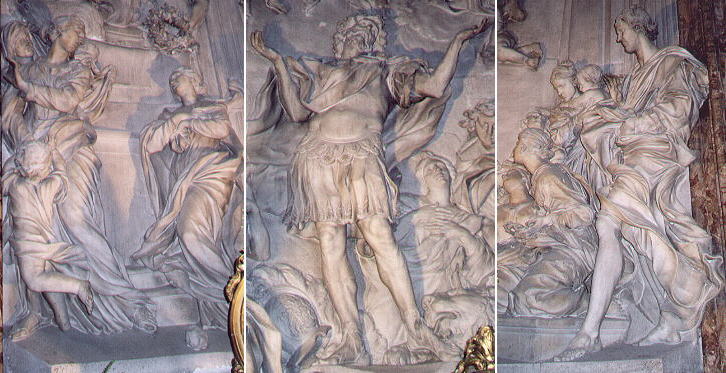 Algardi and Borromini were highly praised by Pope Innocent X and they both were involved in the design of S. Agnese in Agone. Borromini asked Algardi to take care of the marble altarpieces of five chapels (including the main one). Algardi died in 1654 and the altarpieces were designed and executed by Domenico Guidi, a scholar of Algardi, and by other sculptors who often worked also with Bernini (Ferrata, Caffà, Raggi). The scenes of these reliefs have architectonical elements (steps, columns) which help in indicating the different scale of the figures. Bernini's influence is particularly visible in the slender bodies and in the animated drapery of Raggi's relief. 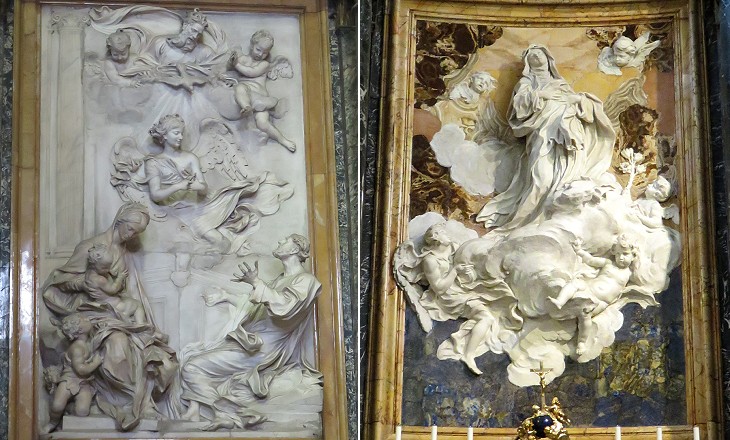 Algardi created a new Baroque species in his largest work, the relief representing the Meeting of Leo and Attila. (..) After Algardi had created this prototype, such reliefs were preferred to paintings whenever circumstances permitted it. This was probably due to the fact that a relief is a species half-way, as it were, between pictorial illusion and reality, for the bodies have real volume, there is real depth, and there is a gradual transition between the beholder's space and that of the relief. Wittkower
For nearly a hundred years the richest chapels had marble altarpieces. Antonio Raggi maintained Algardi's tripartition of the scene in his altarpiece in S. Andrea della Valle. Melchiorre Caffà made an attempt to combine Algardi with Bernini in designing an altarpiece in S. Caterina a Magnanapoli. The use of different marbles (see a page on this topic), the heads of cherubins, the clouds are all references to works by Bernini. 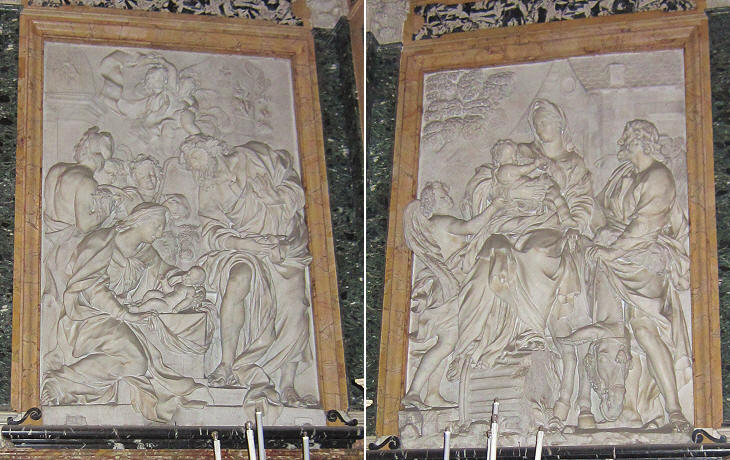 S. Maria della Vittoria - The Shepherds (left) and the Flight to Egypt (right) by Pierre Monnot (1696)

In the works of a Monnot, a Théodon, a Legros, or later of a Michelangelo Slodtz, we sense something of the typically French bienséance and linear grace. In spite of these un-Roman qualities, however, the artists just mentioned absorbed so much of the Roman Baroque spirit that one feels inclined to talk of them as semi-Romans. Wittkower
Towards the end of the XVIIth century a more sober design began to prevail. This was in part due to the influence of French sculptors who after having studied at Accademia di Francia elected to live and work in Rome. They can be considered Roman Baroque sculptors with a leaning towards the style of Algardi, rather than that of Bernini. The reliefs by Pierre Monnot in Cappella di S. Giuseppe (a chapel opposite Bernini's Cappella Cornaro) in S. Maria della Vittoria are a homage to Algardi. 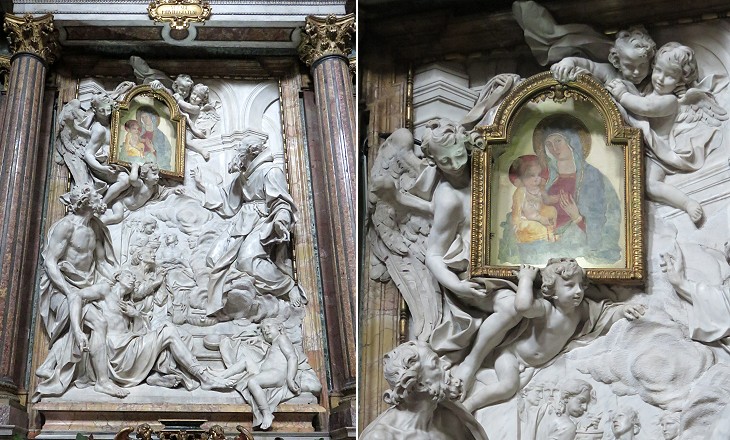 Pierre Legros was the designer of a very creative altarpiece where a painting was inserted into a high relief. It shows that the interest in experimenting new ways of combining architecture, painting and sculpture was alive in the first part of the XVIIIth century.
Marble altarpieces continued to be fashionable until the end of the first half of the XVIIIth century.
Other marble altarpieces in this web site:
Lorenzo Ottoni - Vision of the Holy Family in S. Maria in Campitelli
Filippo della Valle - Annunciation in S. Ignazio
Domenico Guidi - Pietà in Monte di Pietà
Carlo Monaldi - St. James the Greater baptizing Hermogenes in Basilica di S. Marco
School of Alessandro Algardi - Death of St. Thomas Aquinas at Fossanova.


Other pages dealing with Baroque sculpture:
Statues in the act of praying
Representation of Death in Baroque sculptures
Monuments showing the dead in a medallion
Three chapels by Gian Lorenzo Bernini
Bernini's Exiled Statue
Baroque Angels
Baroque Monuments to the Popes
Three busts by Alessandro Algardi
Statues Close to Heaven
Embittered Andrew (the statues in the Octagon of S. Pietro)
Laughing Masks
The Last Baroque Tomb
Playing with Colours
A Directory of Baroque Sculpture