You may wish to read a short introduction to this topic.
Cardinal Federico Cornaro, belonged to one of the richest families of Venice. With him, Gian Lorenzo Bernini did not have budget limitations and he and his team worked for years (1647-1651) on a chapel in honour of St. Teresa of Avila in the church of S. Maria della Vittoria. Cardinal Cornaro required Bernini to execute personally the sculptures and the outcome is one of his masterpieces. 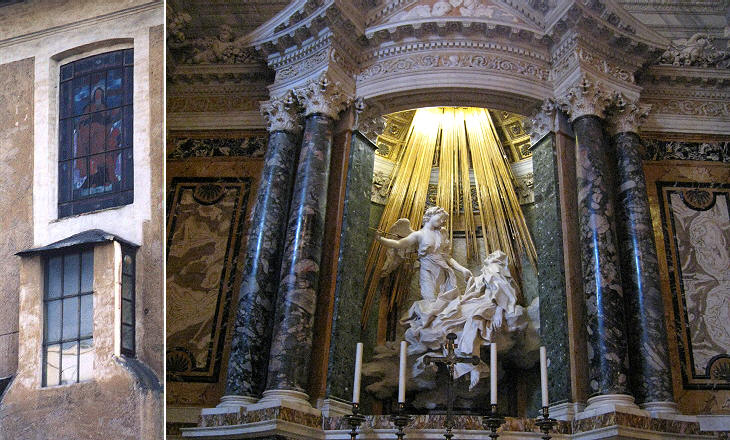 It is virtually impossible to see the work unless the beholder stands in the nave of the church exactly on the central axis of the Cornaro Chapel (..) St Teresa's vision, the focal point of the whole composition, is dramatically accentuated by the contrast between the dark framing colunms and the highly polished whiteness of the group.
Rudolf Wittkower - Art and Architecture in Italy 1600-1750 Penguin Books 1958
The light falls from hidden windows in the top of the altar on the statues of the saint and of the angel. The use of golden rays will again be considered by Bernini in the Chair of St. Peter. The curved shape of the altar brings to mind the niches designed by Francesco Borromini in the same period at S. Giovanni in Laterano. 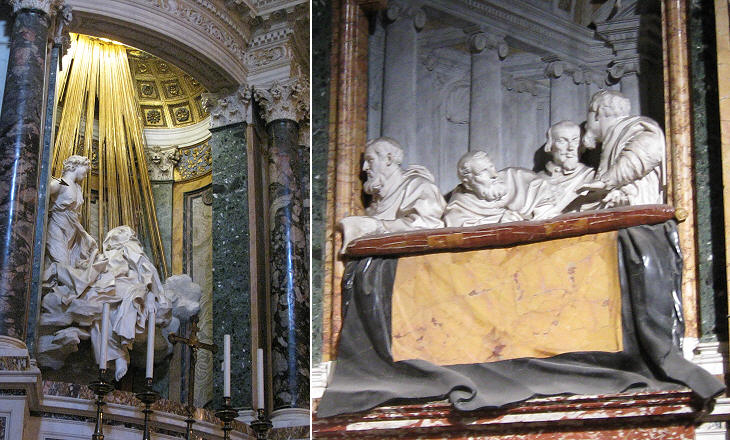 Along the side walls of the chapel, above the door, appear the members of the Cornaro family kneeling behind prie-dieus and discussing the miracle that takes place on the altar. They live in an illusionist architecture which looks like an extension of the space in which the beholder moves. (..) The members of the Cornaro family seem to be alive like ourselves. They belong to our space and our world. Wittkower
Cardinal Cornaro wanted many members (including ancestors) of his family to be commemorated so Bernini devised two reliefs showing them in the background of the nave of a church. The first impression is to see them in a theatre box (Bernini was also a stage designer). 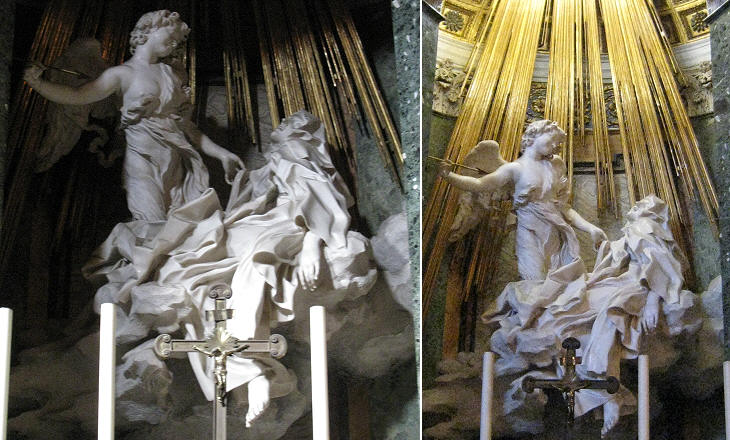 The Ecstasy of St. Teresa

The Statue of the Saint dying away, and the Angel comforting her, in white Marble, is esteem'd one of the principal Works of Bernini: There is a wonderful Expression in the Countenance of the Saint; the Angel I did not so much admire.
Edward Wright - Some Observations made in France, Italy etc. in the years 1720, 1721 and 1722, [1730].
Let not those too susceptible souls, who dread every thing that may recall the ideas of love, ever enter the church di Vittoria at Rome; they would there see the statue of St . Theresa by Bernini. Theresa is seen lying half inclined, exposing her whole body ... her hair, her features, her hands and feet especially are languishing. I feel within myself, if I may so say, a kind of mental blush; let us quit the subject.
Charles Dupaty - Travels through Italy in a series of letters written in the Year 1785
Bernini's approach to the problem of light is in a clearly defined pictorial tradition. (..) The directed heavenly light, as used by Bernini, sanctifies the objects and persons struck by it and singles them out as recipients of divine Grace. The golden rays along which the light seems to travel have yet another meaning. By contrast to the calm, diffused light of the Renaissance, this directed light seems fleeting, transient, impermanent. Impermanence is its very essence. Directed light, therefore, supports the beholder's sensation of the transience of the scene represented: we realize that the moment of divine 'illumination' passes as it comes. Wittkower 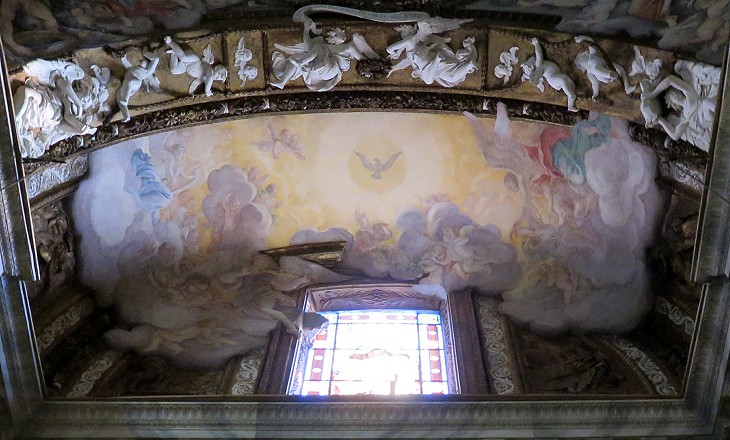 Ceiling of the chapel

The Vault of this Chapel is finely painted by Baciccio, the Subject is a Glory, with Angels. Wright
A work like the Cornaro Chapel was conceived in terms of an enormous picture. This is true of the chapel as a whole. Higher up the colour scheme lightens and on the vaulting the painted sky opens. Angels have pushed aside the clouds so that the heavenly light issuing from the Holy Dove can reach the zone in which the mortals live. Wittkower 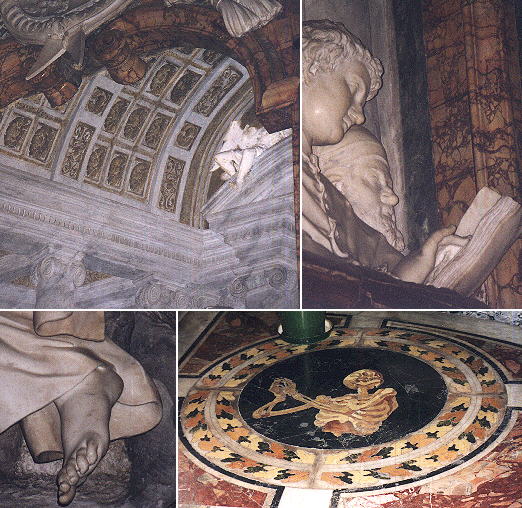 Details of the chapel: architecture of the church behind the Cornaro family; self-portrait of Gian Lorenzo Bernini; St. Teresa's foot; a skeleton watching from the floor of the chapel, similar to that at Cappella Chigi also by Bernini

The genius of Bernini and the professionalism of his team are revealed by the attention to the details in all the elements of the chapel. Dan Brown set here an episode of his novel Angels and Demons; read some remarks on it.

Other chapels by Gian Lorenzo Bernini:
Cappella Raimondi in S. Pietro in Montorio
Cappella Paluzzi Albertoni in S. Francesco a Ripa (the image used as background for this page shows a detail of this chapel)