(statues on the Colonnade of S. Pietro)

Many statues in Rome are positioned at the top of churches and can only be seen at a great distance. The sculptors who were commissioned them were in general minor artists who accepted spending their time on a work which required a limited use of their skills. The statues were very often of a gigantic size (up to 20ft/6m) and in some cases their hidden side was left unfinished. The statues usually portrayed saints standing on their feet, but not in a rigid posture. Some details, e.g. dress embroideries, were sculpted at a larger scale to make them more visible. According to President Charles de Brosses, a French traveller who visited Rome in 1739, statues amounted to a quarter of the population of the City.

Carlo Maderno designed a façade for S. Pietro which was very similar to a palace, because it lacked the central higher section, which usually characterizes the façade of churches. This decision was due to the need of not hiding the view of the dome, a view which had already been impaired by the prolongation of the eastern arm of the church originally designed by Michelangelo. 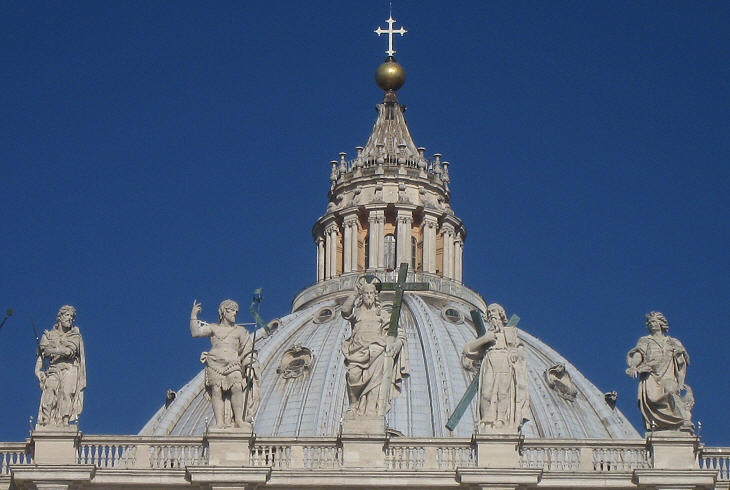 The need to emphasize the religious nature of the façade and to increase its verticality led to the decision of positioning 13 large statues on its top. The statues show Jesus with the Twelve Apostles, or to be precise eleven apostles and St. John the Baptist. The missing apostle is St. Peter, because he was portrayed (with St. Paul) in a statue in the square very near the façade.
Pope Paul V (1605-21) charged Ambrogio Buonvicino from Milan with designing the statues, which were actually executed by other sculptors who were paid the same amount for each statue. In line with the traditional iconography the saints hold a reference to the way they were put to death: this helped their identification. The symbols of the martyrdom were cast in bronze to improve their visibility and for practical reasons: a device used in the past by Greeks and Romans and which was still evident in the reliefs of Colonna Traiana. 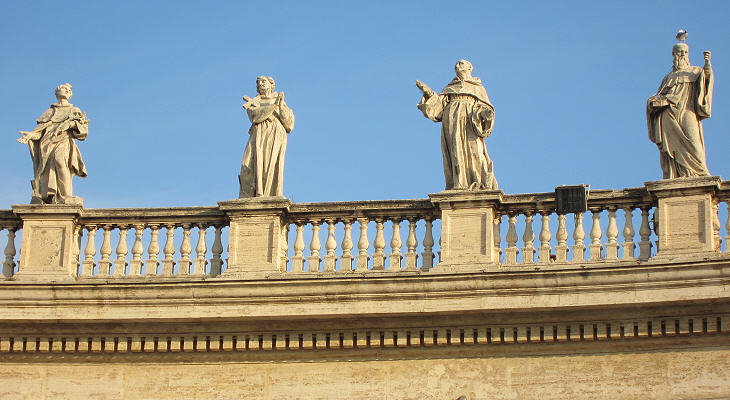 A group of statues of the Colonnade (left to right): St. Dominic, St. Francis of Assisi, St. Bernard of Clairvaux and St. Benedict; other statues are shown in the image used as background for this page

In 1657 Gian Lorenzo Bernini completed the design of Piazza S. Pietro and he echoed the statues of the façade by positioning 90 statues of saints at the top of the elliptical colonnades encircling the square. The statues of the saints had the function of a choir and thus Bernini requested his assistants (Lazzaro Morelli, Giovanni Maria de' Rossi and a few others) who executed them to strictly conform to the same standard. The statues were smaller in size than the coats of arms of Pope Alexander VII (1655-1667) which marked the centre and the ends of the colonnades: so the statues seem to celebrate the glory of the Pope. They were however intended to create the proper setting for the ceremonies of canonization by which new saints were created. In the late XVIth century formal processes for the canonization of new saints were established. On March 12, 1622 Pope Gregory XV, in the course of a series of very spectacular ceremonies, created five new saints: the ceremonies took place in S. Pietro, but also in other churches. Four of the five new saints were Spanish (St. Ignatius of Loyola, St. Francis Xavier, St. Teresa of Avila, St. Isidore the Labourer) and one Italian (St. Philip Neri). The creation of St. Isidore in particular was in homage to the King of Spain as the new saint had been bishop of Madrid in 1130, when Madrid was a town of very little importance. Most of the cost of the ceremonies was borne by Spain.
Pasquino, the most vocal talking statue of Rome criticized the event by saying: Oggi il Papa ha canonizzato quattro spagnoli e un santo (today the Pope canonized four Spaniards and one saint). The successor of Gregory XV, Pope Urban VIII thought proper to review again the process of canonization. One of the outcomes of the review (completed in 1644) was to locate in S. Pietro the ceremony of canonization and Alexander VII thought the new design of the square would provide the proper setting for this ceremony. 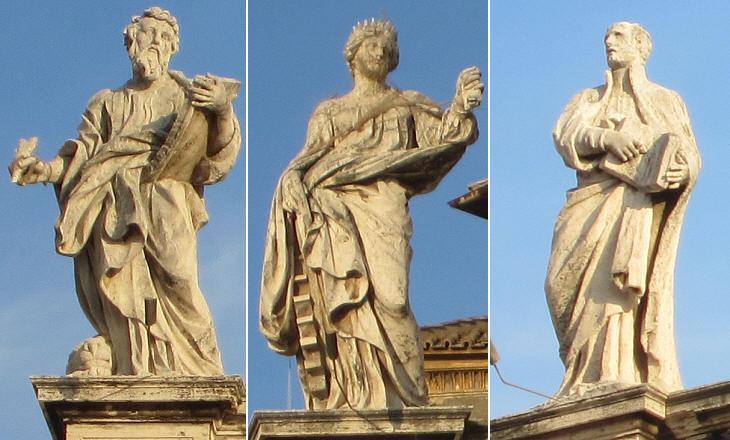 (left to right) St. Mark, St. Catherine of the Wheel and St. Ignatius of Loyola

The selection of the saints must have been quite a headache: they were chosen to represent the different groups of saints: evangelists, martyrs, founders of religious orders. In the XVIIth century they were all identifiable even by the least cultured people, because their lives were the subject of popular tales and innumerable paintings (see a page on their iconography). 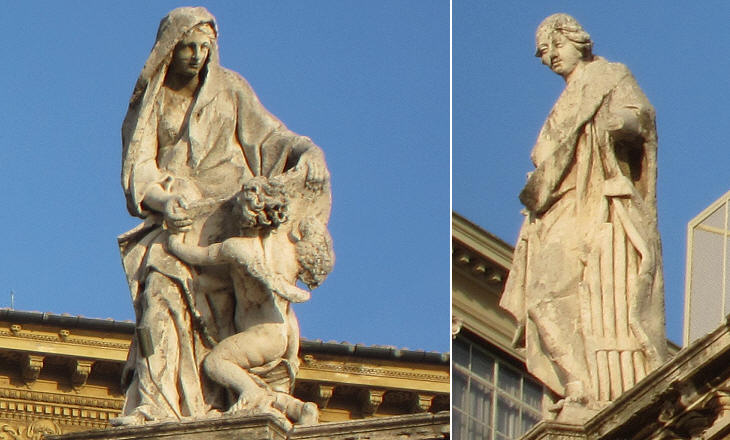 In 1703 Pope Clement XI added another 50 saints to the first group. The new statues were positioned at the top of the series of pillars which link the colonnade with the façade. The sculptors had to comply with the standards of size defined by Bernini for the colonnade, but they took some freedom (some of them were among the best sculptors of that period). Jean-Baptiste Théodon was allowed to add an angel to St. Frances of Rome and make a little group. The choice of the new saints responded to some criticism concerning the first selection: the statues of St. Frances of Rome and St. Cecilia (again by Jean-Baptiste Théodon) met the requests of the Roman common people who had a special devotion for these two saints. The positioning of the statues, like the seating of the guests at a formal dinner, was not haphazard: sometimes saints having something in common were grouped together (the founders of the orders, the popes, St. Frances of Rome and St. Cecilia, etc.,), in other cases they were located in the opposite sides of the square. The statues of St. George (by Lorenzo Ottoni) and St. Crescentinus (by Jean-Baptiste Théodon), saints who both fought against a dragon are the third statue on the right and left side of the square between the colonnade and the façade.

After the renovation of the interior of S. Giovanni in Laterano, done by Francesco Borromini in the 1650s, the old portico façade did not match any longer with the new size of the naves and of the chapels. In 1732 Alessandro Galilei, a Florentine architect who had worked for five years in England, won the contest for the design of the new façade.

The façade he eventually built had some points in common with the façade of S. Pietro, the most evident one being the gigantic statues of Jesus and the Doctors of the Church on its top. The size of the statues makes them visible at a great distance also because the façade is higher than the rest of the basilica. 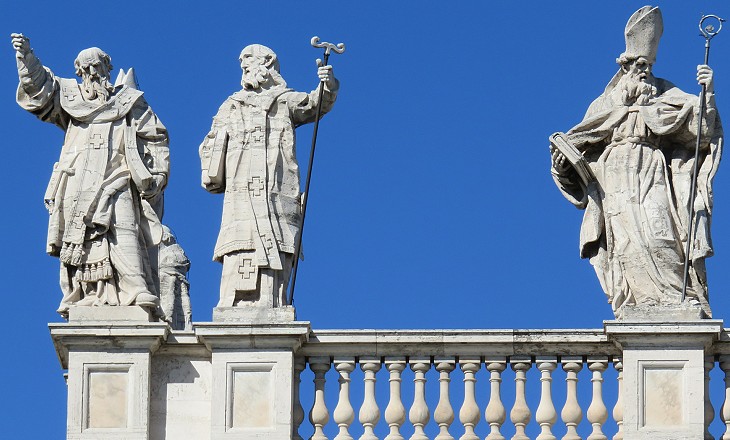 The choice of portraying the Doctors of the Church, although justified by religious considerations, limited the appeal of the statues because most of the saints were not associated with well known miracles or events. Minor sculptors were involved in the execution of the statues, the best sculptors being busy at the time with the decoration of the Corsini chapel inside the basilica or of Fontana di Trevi.

The interior of S. Maria Maggiore was largely renovated by Pope Sixtus V (1585-1590) and Pope Paul V (1605-1621). In 1668 Pope Clement IX commissioned Bernini the design of a new decoration for the exterior of the apse of the basilica. 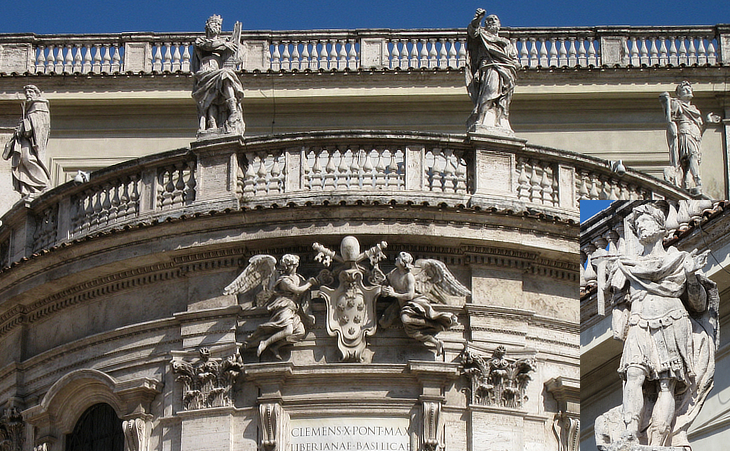 Apse of S. Maria Maggiore: statues by Francesco Fancelli: (left to right) St. Dominic, King David, St. Peter and St. Paul (who was not portrayed according to the usual iconography - see inset)

Bernini designed a large double portico which should have been crowned by 47 statues. The work started in September 1669, but it was soon stopped by the death of the Pope in December. The new pope (Clement X) felt that the project was too expensive and he requested of Carlo Rainaldi a new simpler design which was completed in 1675. Only four statues were put on the top of the balustrade. 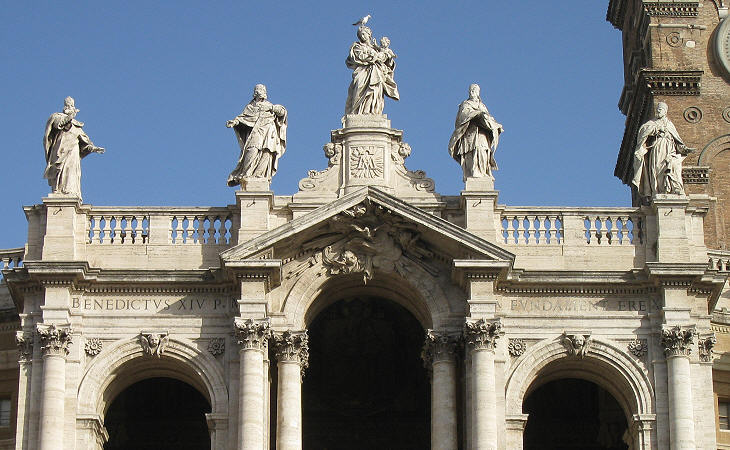 In 1741 Pope Benedict XIV decided to renovate the façade of S. Maria Maggiore. The architect, Ferdinando Fuga, designed a large loggia which preserved part of the original façade with its XIIIth century mosaics. The loggia was surmounted by a statue of the Virgin Mary, attributed to Bernardino Ludovisi. The statue of the Virgin Mary is accompanied by the statues of four popes who promoted major renovations of the basilica. 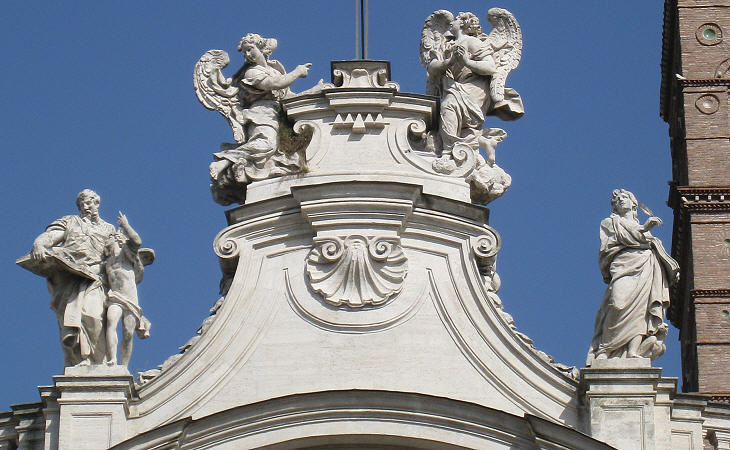 Pope Benedict XIV renovated the interior of the church and added an oval vestibule designed by Domenico Gregorini and Pietro Passalacqua which covers the old façade. The church is dedicated to St. Helena, mother of Emperor Constantine and they both are celebrated by a statue on the top of the façade. Four other statues are dedicated to the Evangelists.

The use of large statues on the top of churches was not limited to the basilicas and it was adopted by Baroque architects also in many other churches. Carlo Rainaldi, who designed the churches of S. Maria dei Miracoli and S. Maria in Montesanto under the supervision of Bernini, positioned several statues around the domes of the churches. 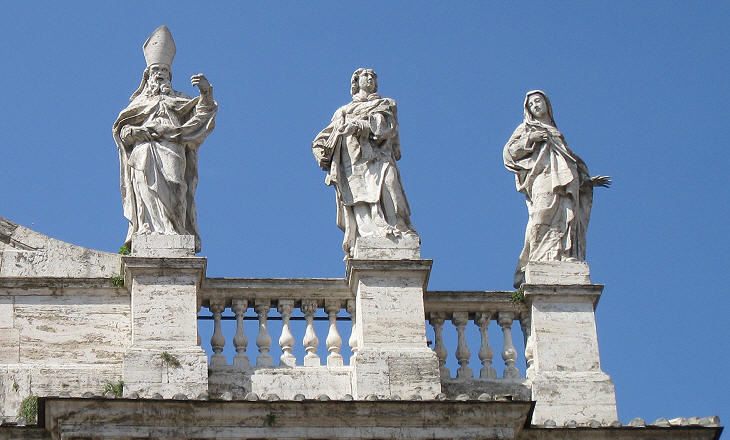 Alessandro Galilei, in addition to the façade of S. Giovanni in Laterano, designed that of S. Giovanni dei Fiorentini: in this case the choice of the saints responded to architectural needs. 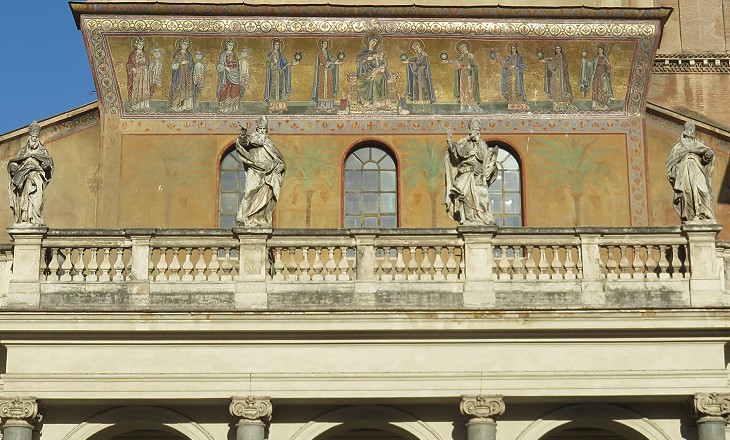 Other pages dealing with Baroque sculpture:
Statues in the act of praying
Representation of Death in Baroque sculptures
Monuments showing the dead in a medallion
Baroque Angels
Three chapels by Gian Lorenzo Bernini
Bernini's Exiled Statue
Three busts by Alessandro Algardi
Baroque High Reliefs
Baroque Monuments to the Popes
Embittered Andrew (the statues in the Octagon of S. Pietro)
Laughing Masks
The Last Baroque Tomb
Playing with Colours
A Directory of Baroque Sculpture