Links to this page can be found in Book 2, Day 4, View C6 and Rione Parione. 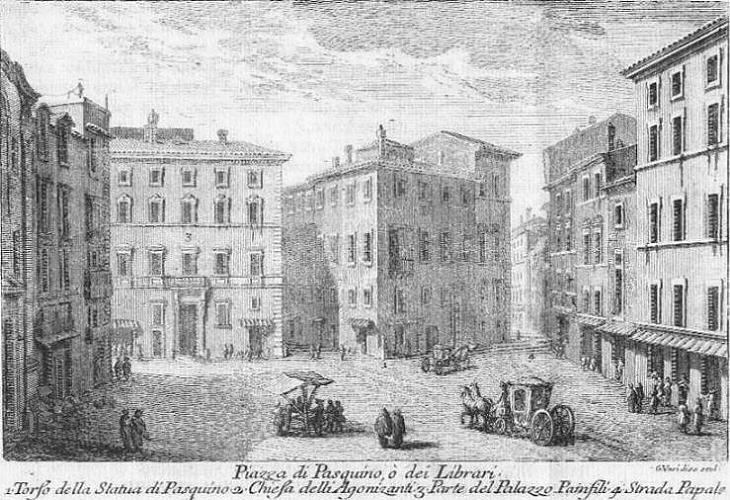 Piazza di Pasquino is a small square near Piazza Navona which is famous for an ancient statue representing Menelaus holding the dead body of Patroclus; the statue is known as Pasquino after the name of a tailor who lived nearby and who had a reputation for lampooning. Giuseppe Vasi included it in his 1752 book covering the main squares of Rome, but the statue is hardly visible in his plate.
The view is taken from the green dot in the small 1748 map here below. In the description below the plate Vasi made reference to: 1) Statua di Pasquino; 2) S. Maria degli Agonizzanti; 3) Palazzo Pamphilj; 4) Strada Papale (the street by which the Pope reached S. Giovanni in Laterano from S. Pietro to take possession of his diocese; see a page covering this procession). 3) is shown in more detail in another page. The small map shows also: 5) Palazzo Santobono Braschi; 6) Palazzo dei Ritratti. Palazzo Santobono which stood behind the statue was replaced by a much larger building in 1790-1793 at the initiative of Luigi Onesti, nephew of Pope Pius VI and it was renamed Palazzo Braschi after the Pope's family name. This is the major change from the view by Vasi; other minor changes are related to the façade of S. Maria degli Agonizzanti and to the houses on the southern side of the square.
The square was known also as Piazza dei Librai, booksellers' square, but today it should rather be named after its many small restaurants.

At the turn of the XVIth century many ancient statues (e.g. that portraying Laocoon and his two sons) were found in Rome and its environs; they were used to embellish the palaces of popes and cardinals, but in 1501 a very much damaged statue portraying Menelaus and Patroclus was placed by Cardinal Oliviero Carafa at the corner of Palazzo Santobono where he lived. It soon became the most famous of the talking statues of Rome and it is the only one which is still used for posting satires (but in 2005 Pasquino mourned the death of Pope John Paul II).
Usually Pasquino talked with Marforio, more occasionally with Madama Lucrezia, Abate Luigi, il Facchino and il Babuino.
In Loggia della Signoria in Florence there is another Roman copy of the original Greek statue: it was found in Rome in 1579 and it was donated to Cosimo I de' Medici, Grand Duke of Tuscany by Pope Pius V. It was moved to Florence where it was widely restored (see my Florentine Recollections). 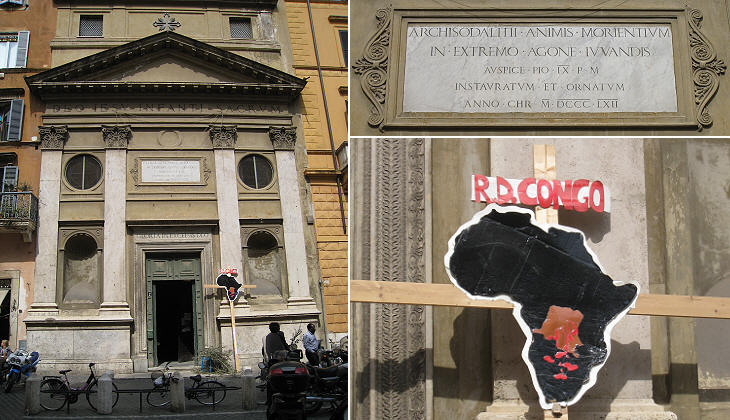 (left) Façade of S. Maria degli Agonizzanti; (right-above) inscription celebrating 1862 modifications; (right-below) map of the Democratic Republic of the Congo on a crucifix

The Fathers of the Agonizants, whose Vocation is, to be the Seconds of those who fight against death itself that is, whose profession is, to assist those that are in the Agony of Death, and to help them to make then those pious Acts, which Christians should most of all then rouze themselves up to.
Richard Lassels' The Voyage of Italy, or a Compleat Journey through Italy in ca 1668
The church in origin was just a chapel for the members of a brotherhood who assisted the very sick and those who were sentenced to death (hence the name agonizzanti). In 1862 it was slightly enlarged, given a new façade and the interior was redecorated.
It is currently (2016) used by the citizens of the Democratic Republic of the Congo, a country which is often devastated by conflicts; this is the meaning of the bleeding map of the country. 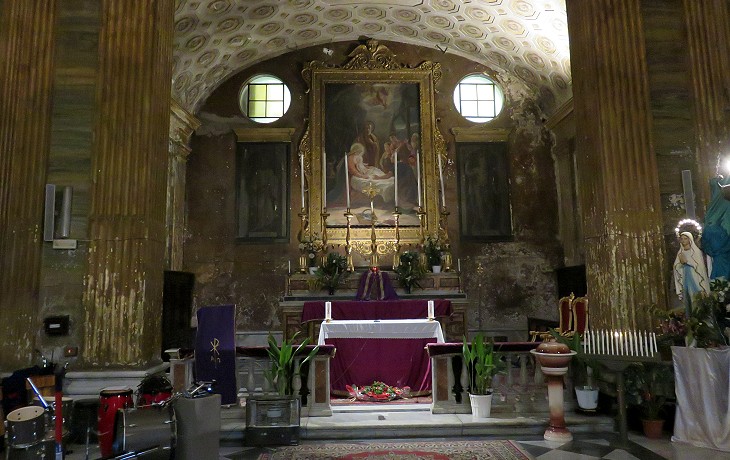 Interior in bad need of being repainted

(left to right) Coat of arms of Pope Pius VI before and after being restored; heraldic symbol of the Onesti family; coat of arms of Luigi Onesti Braschi, Duke of Nemi, and Costanza Falconieri, his wife in the Piazza Navona side of the palace

The coat of arms of Pope Pius VI was recently cleaned, but the heraldic symbols of the Pope were erased during the French occupation of Rome; they can still be seen in the courtyard of the palace: they included Boreas, the Greek cold north wind (it is shown in the image used as background for this page). This wind proved to be too strong for Pope Pius VI. The palace was built by Luigi Onesti on the site of an older building originally belonging to the Orsini and later on sold to the Caracciolo di Santo Buono (corrupted in Santobono).
Luigi, son of Girolamo Onesti and Giulia Braschi, was adopted by the Pope and was allowed to add the surname of his uncle (Braschi) to his own, so the palace should be called Onesti Braschi, but because onesti means honest in Italian the double name sounded inconsistent with the fame of Luigi.
Palazzo Braschi is shown in more detail in another page. 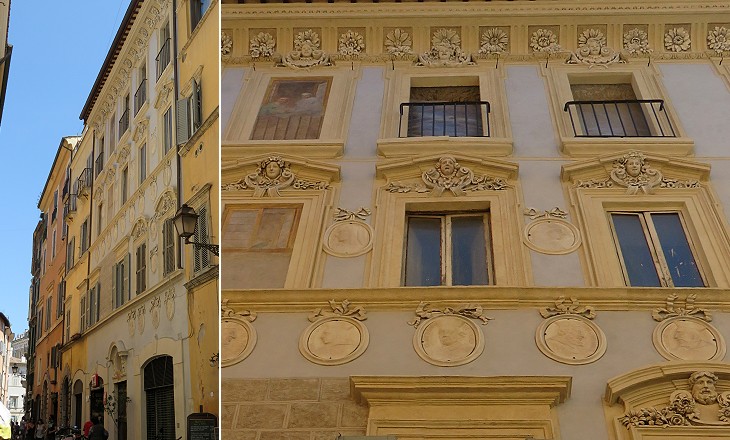 This section of Strada Papale is now called Via del Governo Vecchio after the palace by the same name. It was one of the most important streets of Rome and many buildings show the wealth of their owners. Palazzo dei Ritratti (portraits) is the name usually given to a palace decorated with reliefs portraying great jurists of the past and for this reason it is also known as Palazzo dei Giureconsulti. The reliefs were most likely made in the late XVIIth century at the initiative of Bartolomeo Lupardi, a bookseller who made a fortune by publishing librettos. Andrea Leone, his nephew, was a brilliant lawyer. The Lupardi eventually bequeathed the building to Arciconfraternita delle Stimmate di S. Francesco.

A short stroll in the streets near Piazza di Pasquino leads to discovering many minor buildings which retain memories of their former landlords. 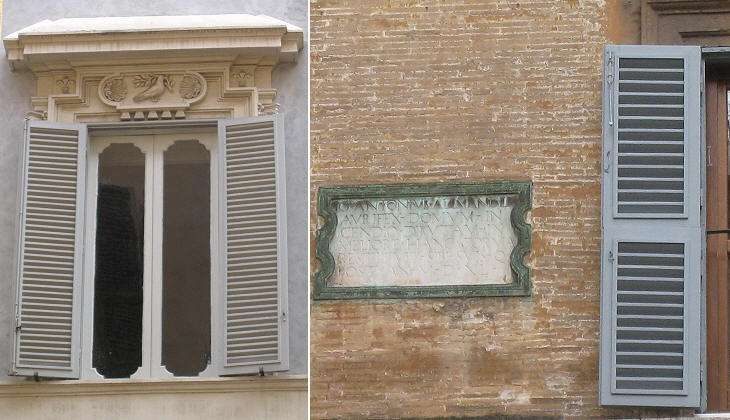 Before the construction of Palazzo Braschi the most important building in Piazza di Pasquino was the rear side of Palazzo Pamphilj; in 2009 a careful restoration cleaned the elaborate decoration of its windows and brought the façade back to the colour it had in the XVIIIth century (see a page on the changing colours of Rome).
In 1540 a fire damaged a house which stood on the other side of the square. Giovan Antonio Alessandri, a goldsmith, celebrated its restoration with a Latin inscription which reads "IO. ANTONIUS ALEXANDRI AURIFEX DOMUM INCENDIO DIRUTAM IN MELIORE HANC FORMA RESTITUIT SIBI SUIS Q. POST. AN MDXL".

(left) Entrance of Casa Ricci a Parione; (right) 1614 inscriptions on the rear of the building with the family motto "Hoc Fac et Vives" (Do this and you will live - Luke 10:28)

Palazzo Ricci is one of the most interesting Renaissance palaces of Rome, owing to the paintings which decorate its façade. Orazio Ricci, a member of the family, bought a modest house near Piazza di Pasquino, but this was not an obstacle to decorating its entrance with his name and his heraldic symbol (a hedgehog, in Italian riccio). 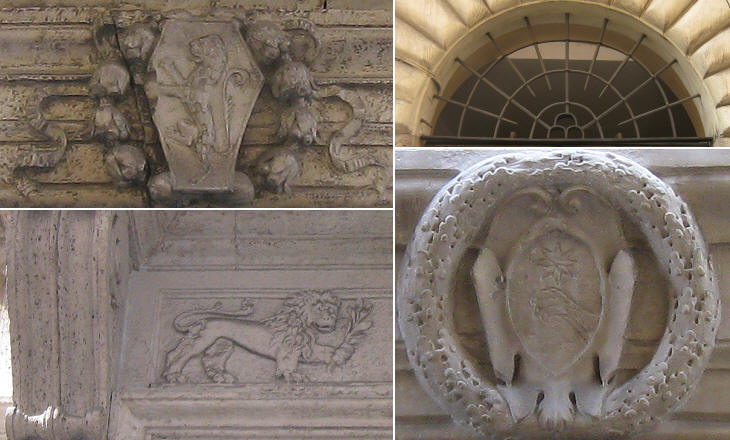 In some cases the reference to the owner of the house is not immediately evident; a fan window above the door of a small building is protected by iron bars starting from a point decorated with three mountains: it means it belonged to the Peretti, the family of Pope Sixtus V, whose heraldic symbols included the trimonzio, three mountains. A nearby house was bought by the Peretti who surrounded the rampant lion of the previous landlords (Matuzzi) with a wreath of pears (another of their heraldic symbols).
There is no memory of the owner of the gentle lion who greets those who enter a small palace in Via di S. Maria dell'Anima with an olive branch. A Renaissance coat of arms showing a star above a lion's paw perhaps belonged to a Brancaleone (paw of lion) family as per the coat of arms of a Neapolitan family by that name (it opens in another window).

The Pamphilj had several properties in the area behind Piazza Navona and they placed their doves on many of them; before being bought by the Pamphilj most of these estates belonged to the De Cupis, a family from Montefalco, who acquired great wealth with Giandomenico de Cupis who was cardinal for 36 years (1517-553) and Dean of the Sacred College for 16. 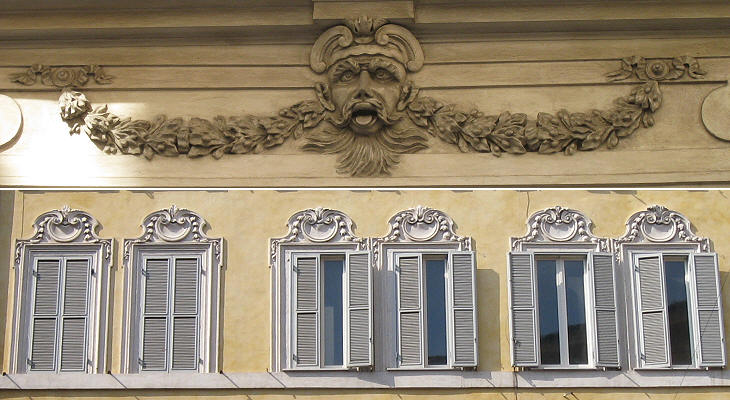 (above) Decoration of Palazzo Bonadies in Via di S. Pantaleo; (below) windows of an XVIIIth century house in Piazza Pasquino

Just a few buildings have decorations which are not related to their owners: this is the case of Palazzo Bonadies with its laughing mask and of the generic decoration of an XVIIIth century building which was split into flats for rent.