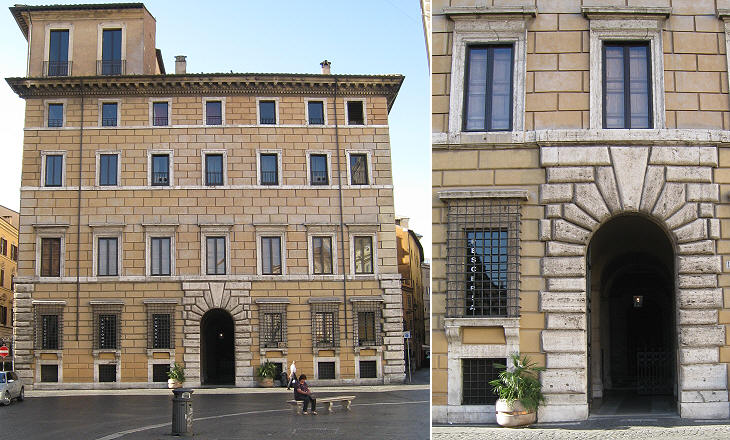 Most of the views of Piazza Navona are taken from its southern side. Thus Palazzo Lancellotti ends up by being neglected. It is a pity because this palace is a fine work by Pirro Ligorio. It was built in 1552 for Ludovico de Torres, Archbishop of Salerno. Other de Torres founded the nunnery of S. Ambrogio della Massima and restored S. Pancrazio. The building was acquired by the Lancellotti in the XVIIth century. Their main palace is situated in Via dei Coronari and a villa at Frascati is named after them. 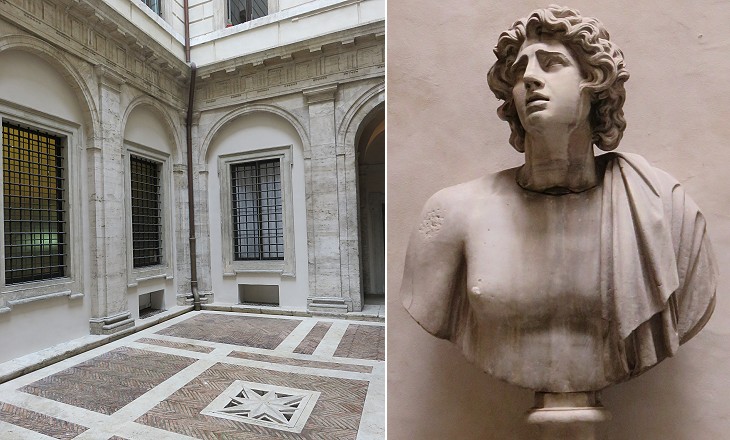 (left) Courtyard; (right) ancient torso with a head portraying Alexander the Great. It resembles that in the former gardens of Villa Ludovisi. The image used as background for this page shows an ancient mask in another courtyard 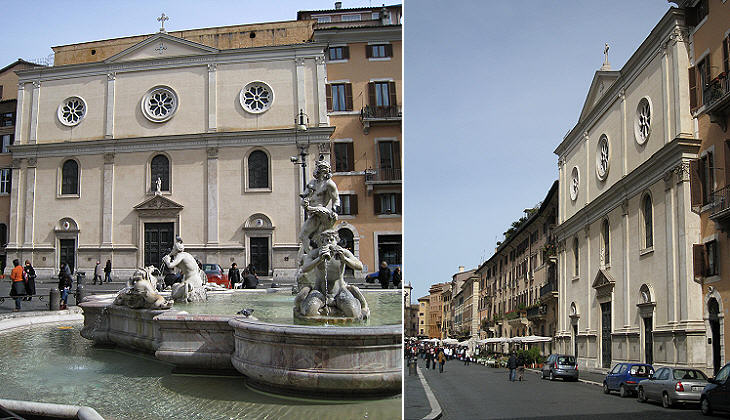 S. Giacomo degli Spagnoli was built in 1450 for the Spaniards from Castile and Leon. Those from Aragon, Catalonia and Valencia had a separate church in Via di Monserrato. S. Giacomo degli Spagnoli was among the most important churches of Rome for more than two centuries. The political decadence of Spain brought about that of the church. It was closed between 1829 and 1881 when its façade in Piazza Navona was redesigned. It had another (lost) façade opposite Archiginnasio della Sapienza. You may wish to see its two façades as they appeared in a 1588 Guide to Rome. 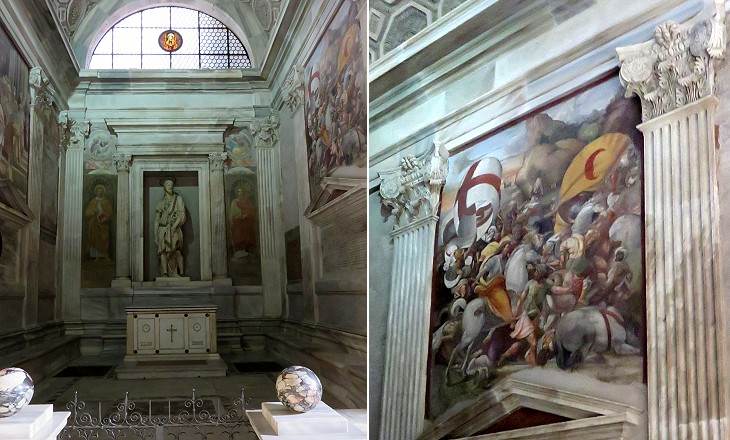 (left) Chapel designed by Antonio da Sangallo the Younger; (right) Battle of Clavijo by Pellegrino da Modena. This legendary battle was fought in 824 in northern Spain. The Christian army defeated that of the Emir of Cordoba with the help of St. James the Apostle who personally acted as commander

In 1936-1938 the size of the church was reduced to make room for a new street and its eastern section was demolished. The interior retains only a limited part of its XVIth century decoration. You may wish to see a directory of national churches in Rome. 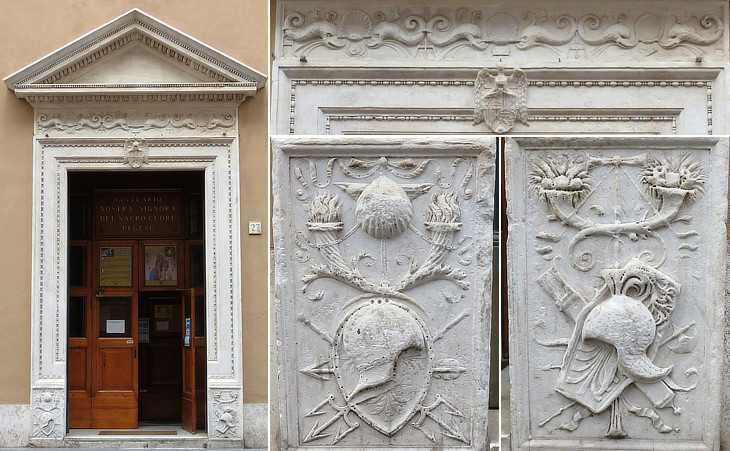 Portal by Pietro Torrigiani (1500) and details of its decoration

The portal of the façade in Piazza Navona was moved to the new one opposite Archiginnasio della Sapienza. It shows a decoration which included military trophies, similar to what can be noticed in other churches of the same period, e.g. Santa Aurea at Ostia. The dolphins of the lintel are a decorative motif which was copied from Basilica di Nettuno which is not far away.

The church and the adjoining buildings, as well as other buildings belonging to the Spanish community are decorated with the xenodochion, a shell with a pin, a symbol of the pilgrims on the route to St. James of Compostela, a sanctuary in Northern Spain (xeno in Greek means foreigner). They wore a badge or an embroidery having the shape of a shell. 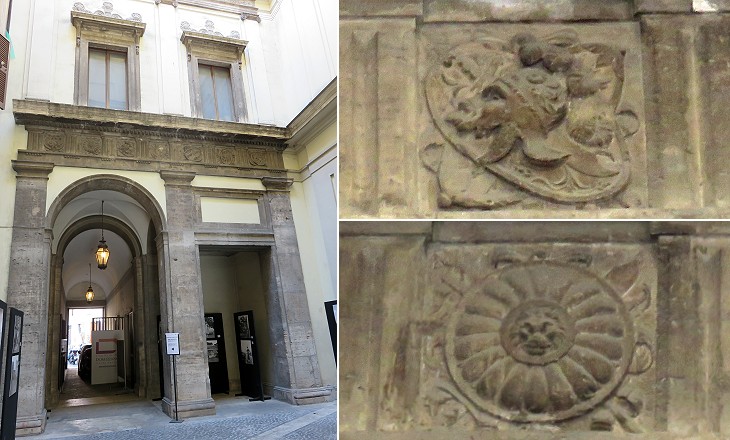 Giacomo Barozzi da Vignola was a leading Italian architect in the 1540-570 period. Villa Giulia, Palazzo Farnese di Caprarola, il Gesù and Villa Lante di Bagnaia are some of the monuments he designed (they were often completed by other architects). His name is traditionally associated with an elegant Renaissance courtyard inside a house in the north-western section of Piazza Navona. 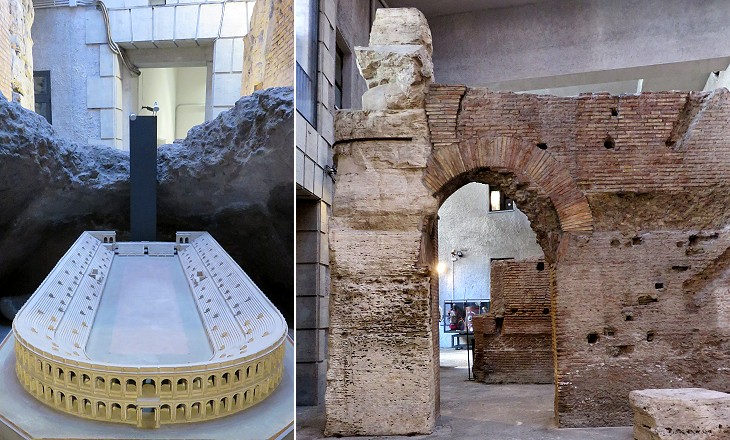 The historical section of this website has some background information and other images of the stadium built by Emperor Domitian in 86 AD. Its ruins were found in 1936 under three buildings in the northern section of Piazza Navona. 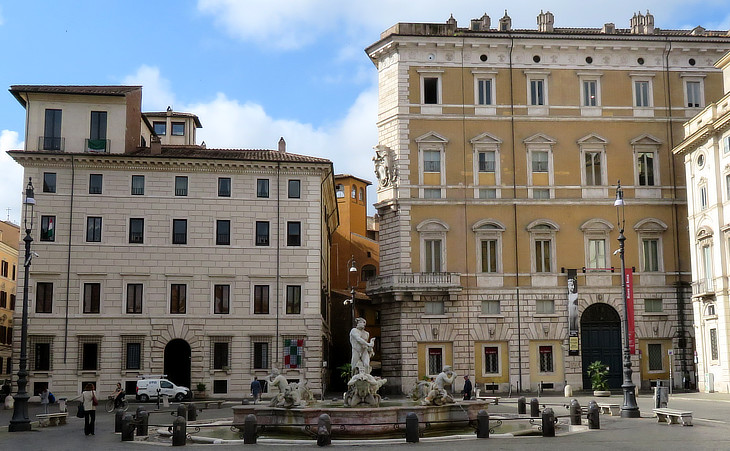 Southern side of Piazza Navona

You may wish to complete your tour of the monuments of Piazza Navona by visiting Palazzo Santobono Bracci at its southern end.