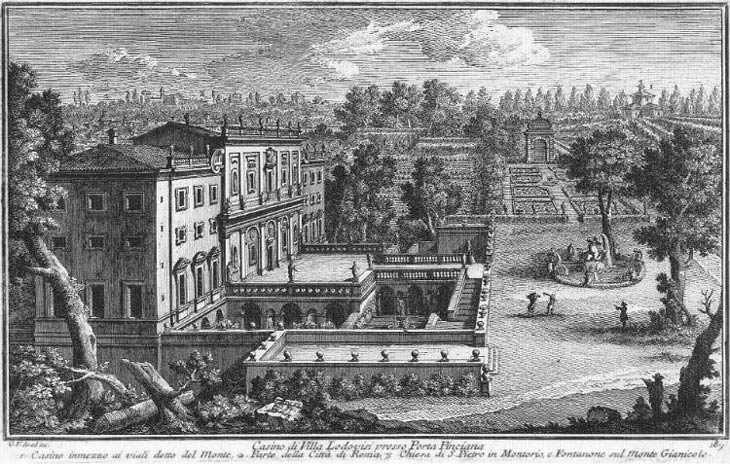 This 1761 etching by Giuseppe Vasi is almost a copy of a 1665 view by Giovanni Battista Falda (it opens in another window). He might have done so because during the XVIIIth century the villa was not utilized and probably the gardens were not properly maintained. As a matter of fact, Vasi, unlike Falda, did not show many people walking in the gardens or standing on the terrace.
At Vasi's time the property belonged to the Boncompagni Ludovisi because in 1681 Ippolita, the last of the Ludovisi, married Gregorio II Boncompagni, a distant relative of Pope Gregory XIII and the owner of many fiefdoms, including some in the Kingdom of Naples. The villa however continued to be named after its founder Cardinal Ludovico Ludovisi, nephew of Pope Gregory XV.
The view is taken from the green dot in the small 1748 map here below. In the description below the plate Vasi made reference to: 1) Casino del Monte; 2) part of Rome; 3) S. Pietro in Montorio and Fontanone sul Monte Gianicolo, which are shown in detail in another page. The small map shows: 1) Casino del Monte; 2) Main Casino; 3) Porta Pinciana; 4) niche with a bust of Alexander the Great. 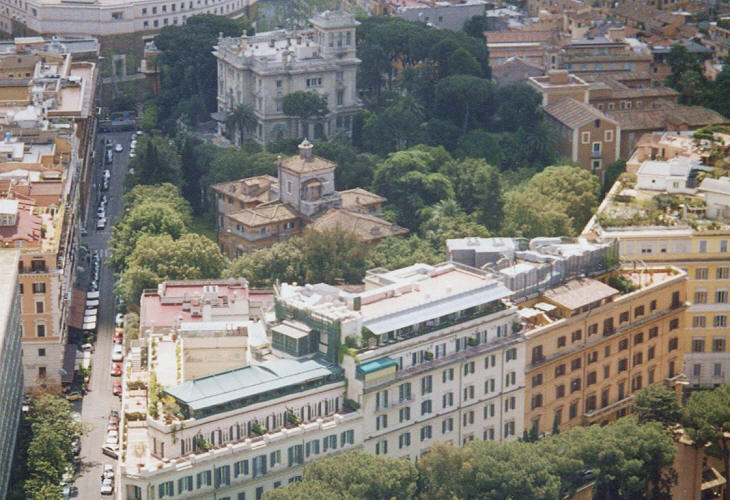 Almost the whole area of Villa Ludovisi was sold in 1883-1886 to build hotels, smaller villas and expensive apartment blocks. The new development is known as Quartiere Ludovisi and two of its streets are named after the Ludovisi and the Boncompagni; in order to facilitate access to the area, a sort of Parisian boulevard (Via Vittorio Veneto) was opened from Chiesa dei Cappuccini to Porta Pinciana. The Boncompagni Ludovisi retained Casino del Monte, which can be seen only from the air, because it is surrounded by trees and high walls. 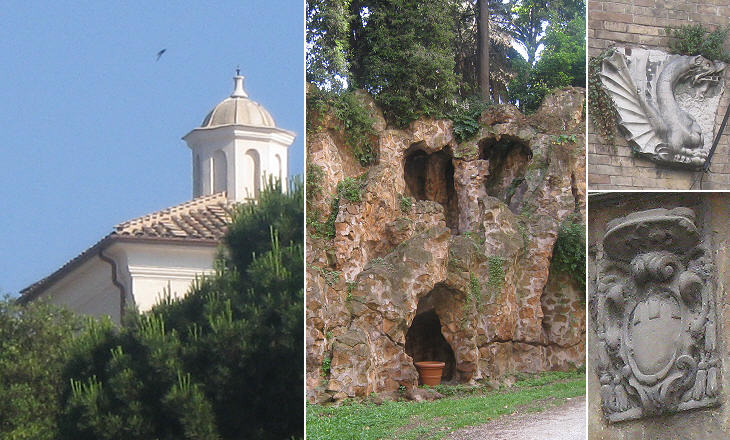 In 1622 Cardinal Ludovisi bought several properties along the walls near Porta Pinciana; one of them belonged to Cardinal Francesco Maria Bourbon del Monte and it included a small casino which Cardinal Ludovisi asked Carlo Maderno to redesign; it was decorated with frescoes including one by Guercino portraying Aurora (it opens in another window); for this reason the building is also known as Casino dell'Aurora (not to be confused with that of Palazzo Rospigliosi Pallavicini). 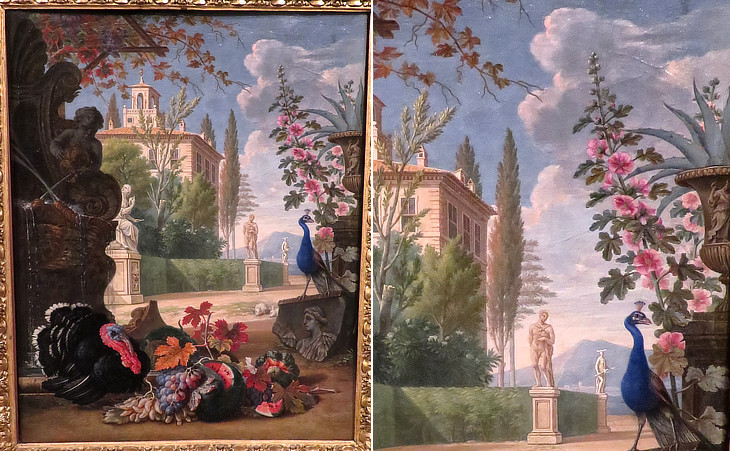 Images of the Past 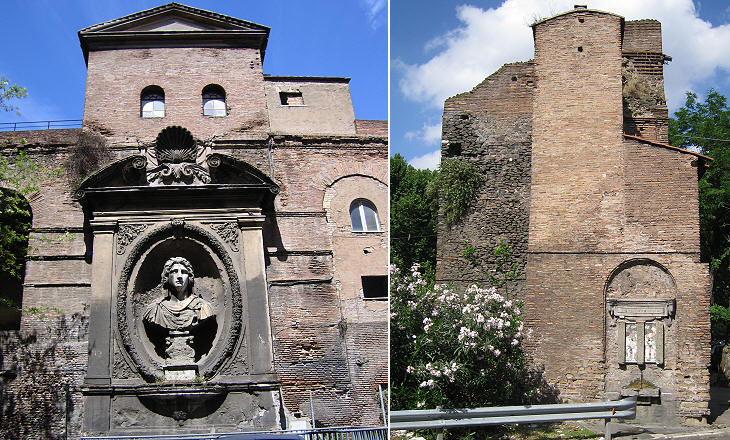 (left) Bust of Alexander the Great (see that inside Palazzo Lancellotti a Piazza Navona); (right) Fons Ludovisia, a small modern fountain, and the ancient walls

The walls of Rome were also the walls of the villa and they still retain some memories of the past; a niche with a gigantic bust of Alexander the Great was placed at the end of one of the main alleys. The gardens were so described by John Evelyn (1620-1706), an English writer and diarist (November 10, 1644): We went to see Prince Ludovisio's villa where was formerly the Viridarium of the poet Sallust. The house is very magnificent, and the extent of the ground exceedingly large, considering that it is in a city; in every quarter of the garden are antique statues, and walks planted with cypress. To this garden belongs a house of retirement, built in the figure of a cross (..) above is a fair prospect of the city.
Read Henry James's account of his visit to Villa Ludovisi in 1873. 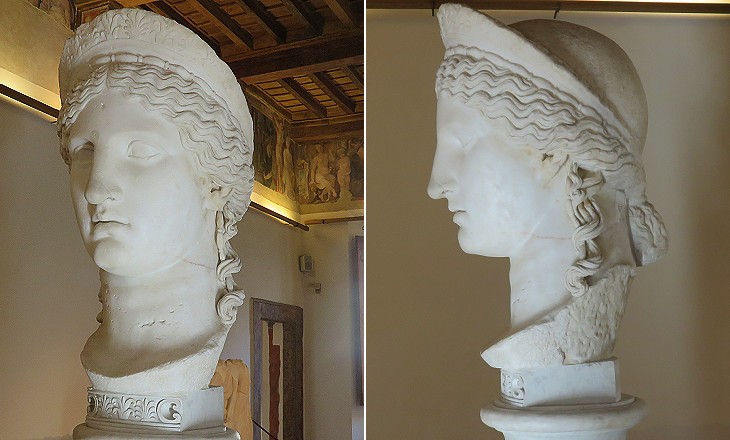 Cardinal Ludovisi gathered an impressive collection of ancient statues and reliefs in his villa; J. W. Goethe especially admired a head of Juno, of which he bought a cast: Yesterday, for my eyes' delight, I set up in the hall outside my room a new cast, a colossal head of Juno, the original of which is in the Villa Ludovisi. She was my first Roman love and now I own her. No words can give any idea of this work. It is like a canto by Homer.
Italian Journey - January 6, 1787 - translation by W. H. Auden and Elizabeth Mayer - Collins. 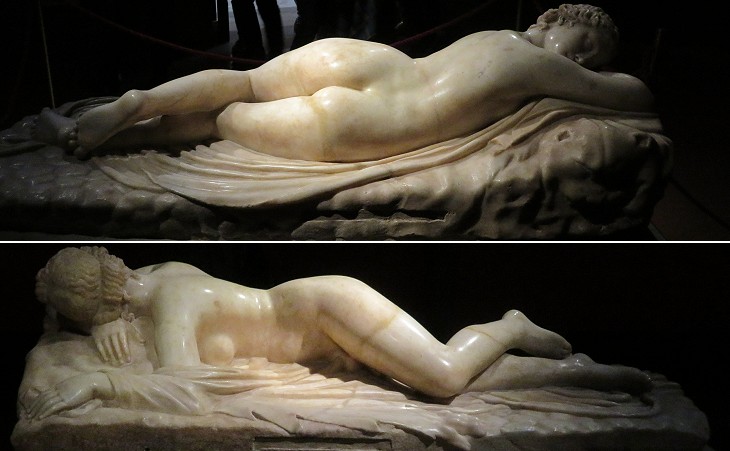 The heirs of Cardinal Ludovisi faced financial difficulties from time to time. In 1669 Prince Giovan Battista Ludovisi sold thirteen ancient statues to Cardinal Leopoldo de' Medici, brother of Ferdinando II, Grand Duke of Tuscany. One of them portrayed a Sleeping Hermaphroditus and it was almost identical to a statue in the Borghese Collection (now at the Louvre in Paris). You may wish to see two other Sleeping Hermaphroditus at Galleria Borghese and Palazzo Massimo alle Terme. 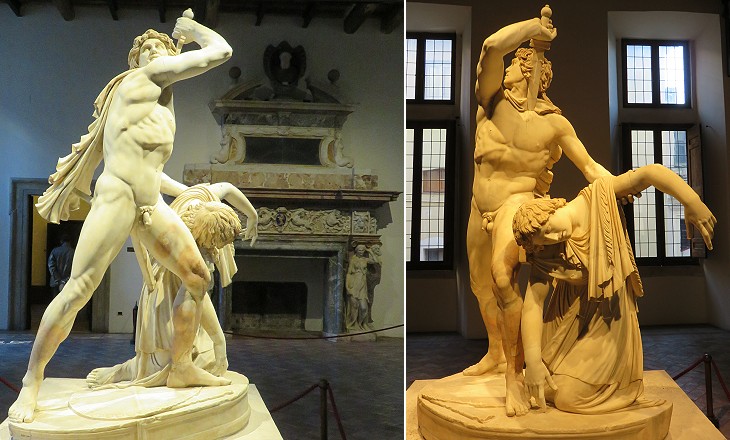 In 1901 the Ludovisi collection was bought by the Italian State. It was displayed at Museo Nazionale Romano in Chiostro Ludovisi; in the 1980s it was moved to Palazzo Altemps.
The famous group (is) commonly called Paetus and Arria, the Roman Senator and his wife accused of having conspired against Claudius. Arria stabbed herself and presented the short sword to Paetus, with the words "It is not painful, my Paetus", when he also stabbed himself. Paetus has just plunged the short sword into his breast; and, although his life-blood springs from the wound, he is still supporting her graceful form, now sinking in death! Winkelmann is of opinion that the group represents the story of Ganace, and that the man is the soldier sent to her by her father, Bolus, on the discovery of her guilt, with the command to kill herself; but the idea of the soldier having followed her example is a gratuitous assumption. Others have supposed it to represent a Gaul, who has mortally stabbed his wife and next himself, an opinion confirmed by the mustachios of the man and the fringed outer robe of the female, which, at that period, were not in use among the Romans, and also by the fact that a tribe of Gauls in Asia, as Polybius relates, rather than surrender, assembled under Mount Olympus, where they first killed their wives and children and next themselves. We must confess that we know not with certainty the subject of the group, which, however, is a noble work of art, full of tragic interest.
Rev. Jeremiah Donovan - Rome Ancient and Modern - 1843
Eventually this statue was associated to The Dying Galatian. They both are marble Roman copies of (lost) bronze statues made for Attalus I, King of Pergamum, to celebrate his victory against the Galatians, a Celtic people, who lived on the Anatolian tableland in the region around today's Ankara. The Persian Warrior is another Roman copy of a statue from Pergamum. 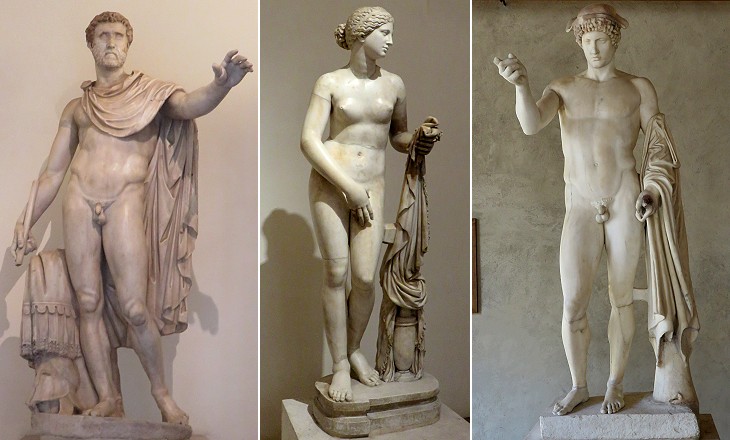 A natural horror of mutilation leads men to complete whatever they possess; and thus the statues of Belvedere have received so much modern work to restore the ancient, that we can hardly distinguish what is original from what is added. Either the old surface is scraped into the whiteness of the new, or the new has received the yellow ivory gloss of the old; while the cement which unites them is so imperceptibly fine.
Joseph Forsyth - Remarks on Antiquities, Arts, and Letters in Italy in 1802-1803
The Ludovisi had a gallery where their collection was on display. Broken statues were not admitted to the gallery, they were placed outdoors together with fragments of columns, lintels and the likes to give the gardens a touch of antiquity. In 1592 Ippolito Buzzi began his career in Rome by sculpturing the head of Alessandro Farnese on an ancient Roman statue. He eventually specialized in completing ancient statues. In the Venus shown above, the head, the right hand, the legs and the cloth are all additions he made to an ancient female torso. That applies, although to a lesser extent, to the other two statues shown above. The principal ornament of the Horti Sallustiani was the Temple of Venus Erycina, afterwards named Sallustiana. (..) Classics described it as standing at the head of the valley between the Pincian and the Quirinal. (..) The temple contained a statue of the goddess seated on a throne; the upper part of the throne was discovered in the summer of 1887, near the junction of the vie Boncompagni and Abruzzi.
Rodolfo Lanciani - The ruins and excavations of ancient Rome - 1897
As a matter of fact the autenthicity of this last addition to the Ludovisi Collection has been debated and the identification of the relief as Aphrodite rising from the sea challenged. Also the appellation of throne does not actually explain the use of this hollow block of marble with reliefs on three sides.

Sarcophagus front depicting nine Labours of Hercules, usually each labour was depicted inside a niche as in a sarcophagus at Galleria Borghese

A number of exhibits from the Ludovisi Collection can be seen in pages dealing with the locations where they were found. You may wish not to miss Sarcofago Grande Ludovisi and Ludovisi Dionysus.

(left) Palazzo Margherita; (right-above) heraldic symbol of the Boncompagni; (right-below) coats of arms of the Italian Royal family and of the U.S.A. (by courtesy of Mr. Tom Wukitsch)

The Boncompagni Ludovisi had their Rome palace in Piazza Colonna which was known as Palazzo Piombino as they had the title of Princes of Piombino, a little town in Tuscany. When the palace was demolished to enlarge the central part of Via del Corso, the Boncompagni Ludovisi built a new very large palace which incorporated the old main casino; it was designed by Gaetano Koch, an architect who played a major role in the development of Rome after its annexation to the Kingdom of Italy (see his redesign of Piazza di Termini).
The palace became the residence of Queen Mother Margherita, widow of King Umberto I, who was shot by an anarchist in 1900. She was a woman of rare beauty and very popular and the palace was named after her (also a variant of Neapolitan pizza is named after her!). Today the palace houses the Embassy of the United States to the Italian Republic. 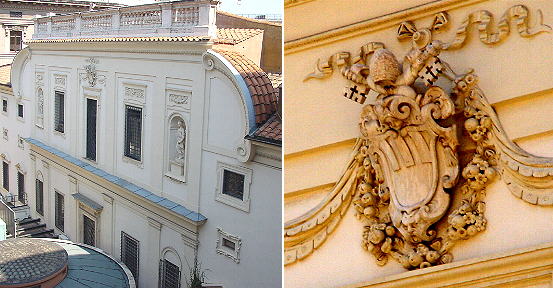 The façade of the main casino is now hidden by Palazzo Margherita. Other family members built their homes in the new development; one of these buildings was bequeathed by Blanceflor Boncompagni Ludovisi (external link) to the Italian State. The image used as background for this page is based on the coat of arms placed at the entrance to the building. Otto Maraini was a Swiss architect who was asked by his brother Erminio to design a villa near Casino del Monte; Erminio Maraini became very rich by introducing the processing of sugar beet in Italy; his widow bequeathed the villa to the Swiss Confederation and the building currently houses a Swiss cultural institution; it enjoys commanding views over Rome.
Otto Maraini designed also a nearby luxury hotel built by a Swiss company. You may wish to see the entrance to another luxury hotel (it opens in another window) in the same neighbourhood.
Read William Dean Howells' account of his visit to Quartiere Ludovisi in 1908.