If you came directly to this page you may wish to read page one and two first. 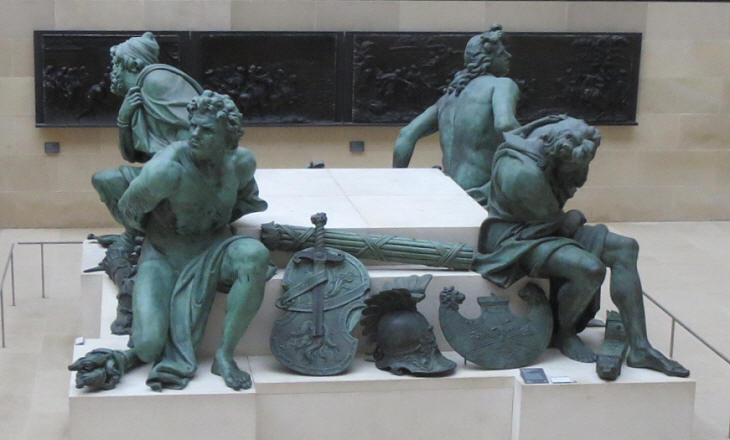 Louvre Museum: remaining elements of a bronze monument to King Louis XIV by Martin Desjardins erected at Place des Victoires in Paris in 1686

When eventually King Louis XIV agreed to have a large statue of himself placed in a square in Paris, he was portrayed standing on a high pedestal with a winged Victory placing a crown on his head. The statue of the King was destroyed during the French Revolution; the lower part of the monument portraying four conquered nations escaped destruction and it is now at the Louvre Museum. There was perhaps an excess of flattery in portraying Spain, the Austrian Empire, the Dutch Republic and Brandenburg-Prussia in chains. Louvre Museum: model of the statue of King Louis XIV as a Roman emperor by François Girardon (1692)

King Louis XIV agreed to be portrayed in an equestrian statue in 1692, when France was at war against the League of Augsburg, an alliance of the four nations already mentioned plus many others, including England and Scotland. French armies were generally victorious and the King himself supervised the sieges of Mons and Namur in Belgium. The statue by François Girardon clearly resembles that of Emperor Marcus Aurelius, which was a model for many other equestrian statues (e.g. Grand Duke Ferdinando de Medici in Florence). The statue was placed in Place Louis le Grand, a square designed for the occasion. It was destroyed during the French Revolution, but its appearance is known from a small scale model now at the Louvre Museum. 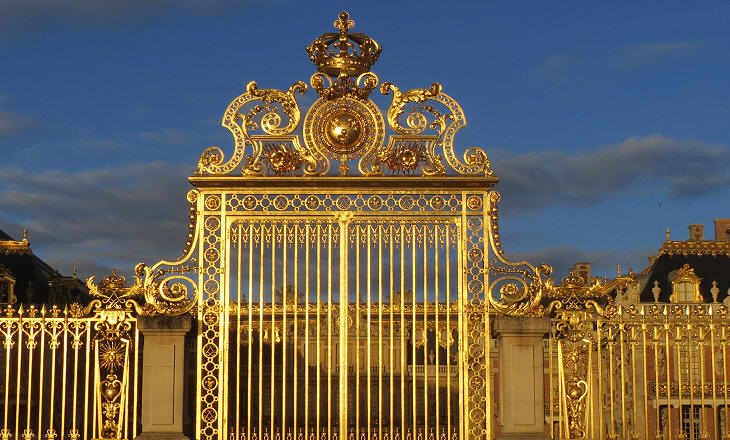 Eventually the many wars of his long reign did not give King Louis XIV that military fame he looked for. He is mainly known for his reforms which greatly reduced the power of French aristocracy and gave him unlimited authority on all matters. He claimed his right to rule had a divine support. His successors continued to reside at Versailles where in a sort of golden cage they lost contact with the needs and hopes of their subjects. Yet the person of the king was respected: the head of King Louis XVI rolled down from the guillotine only on January 21, 1793, three years and half after the French Revolution had begun. 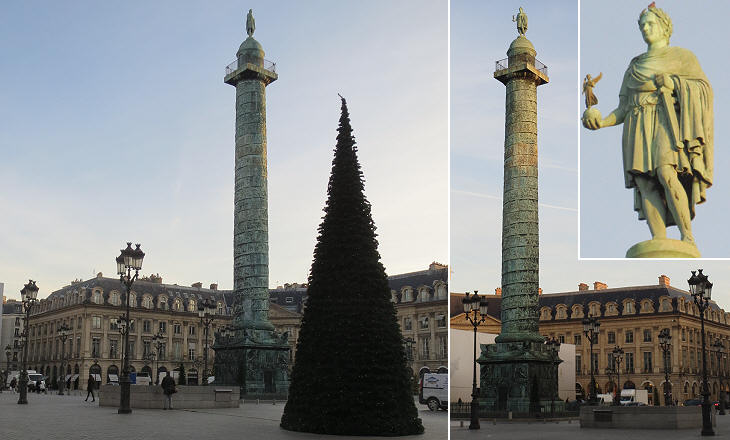 The fame of King Louis XIV as military commander was outshone by that of Emperor Napoleon I. While the wars of the King were chiefly a matter of long sieges, the glory of the Emperor was won on the battlefields. The column which replaced the statue of the king was cast with the bronze of the Austrian cannon which the French took at Austerlitz in 1805. Similar to Louis XIV, Napoleon was an admirer of Emperor Trajan and the column is a copy of that the Roman emperor erected in his forum. When monarchy was restored in France the statue of Napoleon was removed, but the column was not touched. In 1871 however during the Paris Commune it was pulled down as a symbol of nationalism. The bronze reliefs (see one of them) were not greatly damaged and the column was reassembled. The square was renamed Place Vendôme, a name the area originally had because of a palace belonging to the Duke of Vendôme, an illegitimate son of King Henry IV. 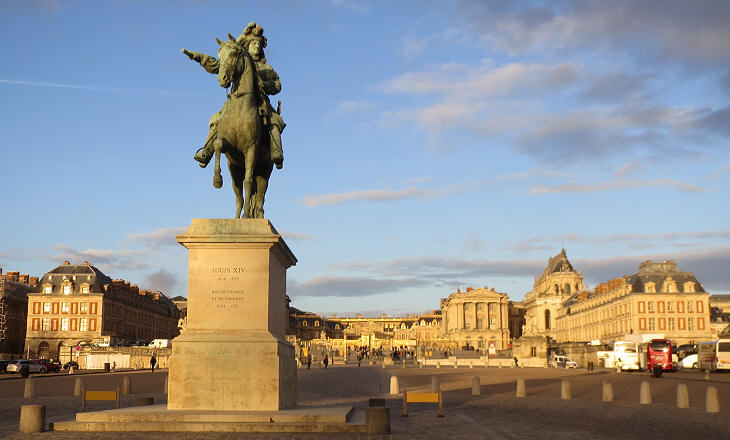 King Louis-Philippe erected an equestrian statue of King Louis XIV at the entrance to Versailles and another one was placed by Charles X in Place des Victoires. That at Versailles resembles the model by Girardon, but the king is no longer portrayed as a Roman emperor and his wig is shorter than in the model and it is partially hidden by a hat. In the XIXth century wigs had become the ridiculous symbol of the Ancien Régime. 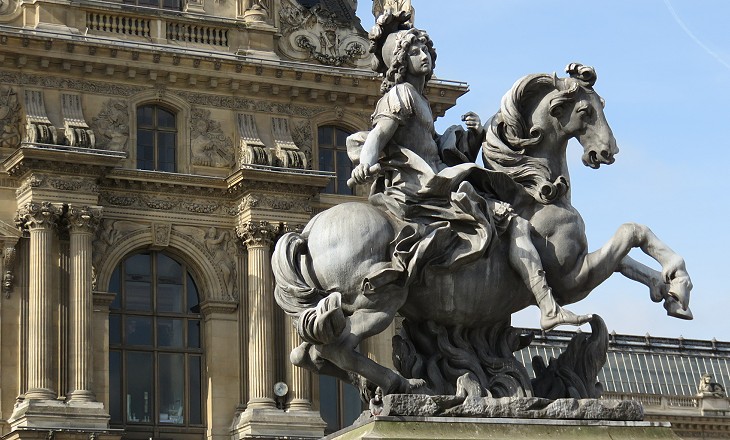 While statues of Frech kings and emperors were erected and pulled down, the statue by Bernini continued to be ignored at the extreme border of Versailles. During the whole XIXth century and for most of the XXth century his works were regarded as symbol of poor taste. Views changed thanks to Rudolf Wittkower, a German art historian who wrote Art and Architecture in Italy 1600-1750 and Bernini, The Sculptor of the Roman Baroque in which he highlighted the great influence Bernini's works had on Italian and European sculpture.
In 1988 Chinese American architect I. M. Pei designed a new entrance to the Louvre and he decided to place a lead copy of the statue near the pyramid which characterizes his project (see image used as background for this page). 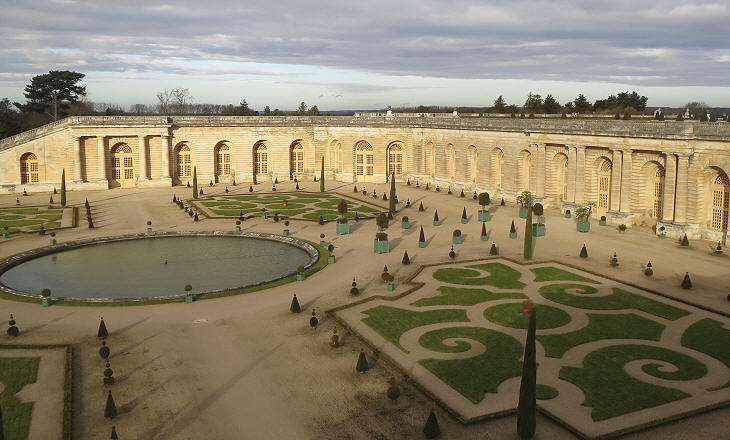 Gallerie de l'Orangerie at Versailles where the original statue is stored

I. M. Pei's admiration for Bernini's works is not yet shared by everybody in France. The original statue after having been vandalized for years was eventually removed and restored, but it is still kept away from the public's view in the gallery of Versailles where citrus trees are kept in winter. Besides a niche in a gallery is not the most appropriate location for a statue which was meant to be seen in an open place (Bernini had suggested on high ground).

Other Works by Bernini which can be seen in Paris 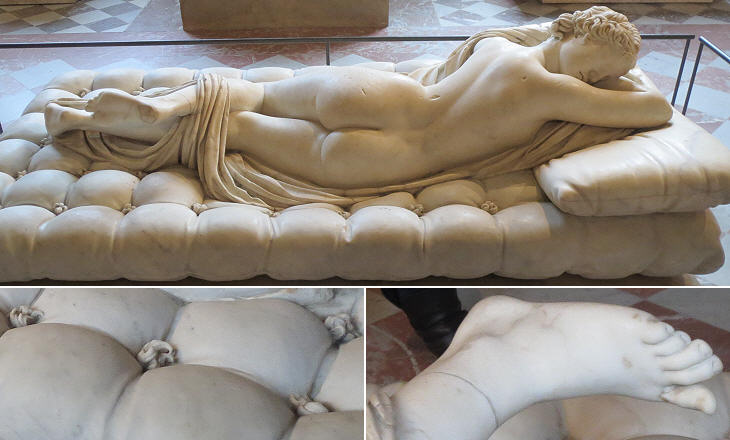 Louvre Museum: (above) Sleeping Hermaphroditus, the womanish son of Hermes and Aphrodite; (below) details by Bernini (1620)

This Villa Pinciana, which belongs to the Borghese family, would make a complete academy for painting and sculpture, especially for the study of antient marbles (..) There is (..) the famous hermaphrodite, which vies with that of Florence: though the most curious circumstance of this article, is the mattrass executed and placed by Bernini, with such art and dexterity, that to the view, it rivals the softness of wool, and seems to retain the marks of pressure, according to the figure of the superincumbent statue.
Tobias Smollett - Travels through France and Italy - 1766
The statue was found in Rome at the beginning of the XVIIth century during the construction of a monastery and church for the Discalced Carmelites. The monks donated it to Cardinal Scipione Borghese who in return asked Giambattista Soria, one of the architects who worked for him, to design the façade of the church which eventually was named Santa Maria della Vittoria. In 1620 the Cardinal commissioned young Gian Lorenzo Bernini the restoration of the statue.
The sculptor, with the Cardinal's approval, did more than a mere restoration. Hermaphroditus was placed on a large and inviting mattress and the added left leg was so raised that the viewer wonders whether he/she is sleeping or rather waiting for a partner. Eventually the statue became a cause of embarrassment and it was shown only to selected visitors.
In 1807 Prince Camillo Borghese sold to Emperor Napoleon (his brother-in-law) his collection of ancient statues at Palazzo and Villa Borghese which today is the backbone of the Département des Antiquités Grecques of the Louvre Museum (although the statues are Roman copies of lost Greek originals). You may wish to see other Sleeping Hermaphroditus which were found in Rome and now are at Galleria Borghese, Palazzo Massimo alle Terme and Galleria degli Uffizi in Florence. 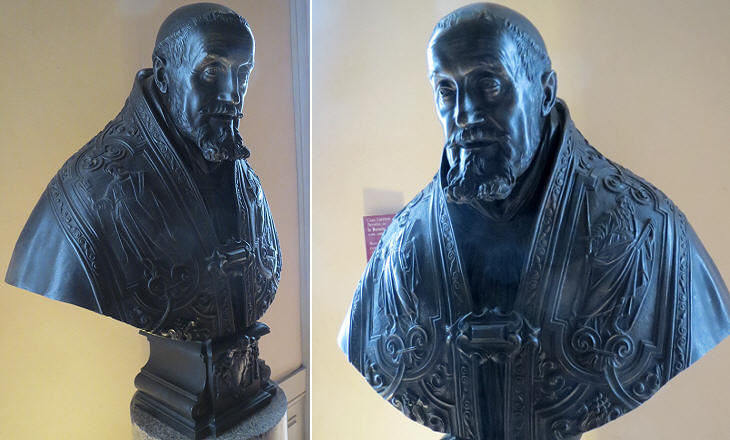 Édouard André and his wife Nélie Jacquemart were keen collectors of works of art, especially Florentine ones. Every year they would travel to Italy to enlarge their collection which eventually was bequeathed to the French State in 1912 together with their house and its furniture. This bronze bust was initially regarded as a copy of a marble one (now at The Art Gallery of Ontario in Toronto). It is now believed to have been made by Bernini himself together with another one in Bologna. For this bust Bernini was awarded a papal knighthood and was called il Cavalier Bernino thereafter. 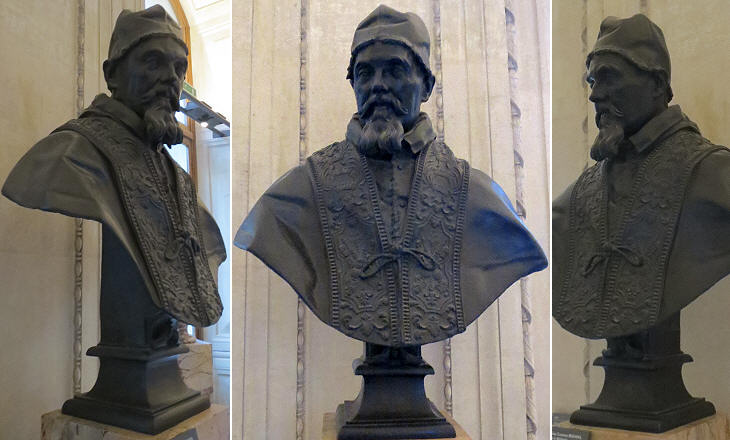 In 1632 Bernini made a marble bust of Pope Urban VIII by whom he was treated like a son. The bust is still at Palazzo Barberini, now turned into a museum. Similar to the bust of Pope Gregory XV, bronze copies were made and one of them was acquired by the Louvre Museum.

Return to Bernini in Paris (page one) or to The Equestrian Statue of King Louis XIV (page two).

Other pages dealing with Baroque sculpture:
Statues in the act of praying
Baroque Angels
Monuments showing the dead in a medallion
Three chapels by Gian Lorenzo Bernini
Representation of Death in Baroque sculptures
Three busts by Alessandro Algardi
Baroque Monuments to the Popes
Baroque High Reliefs
Statues Close to Heaven
Embittered Andrew (the statues in the Octagon of S. Pietro)
Laughing Masks
The Last Baroque Tomb
Playing with Colours
A Directory of Baroque Sculpture