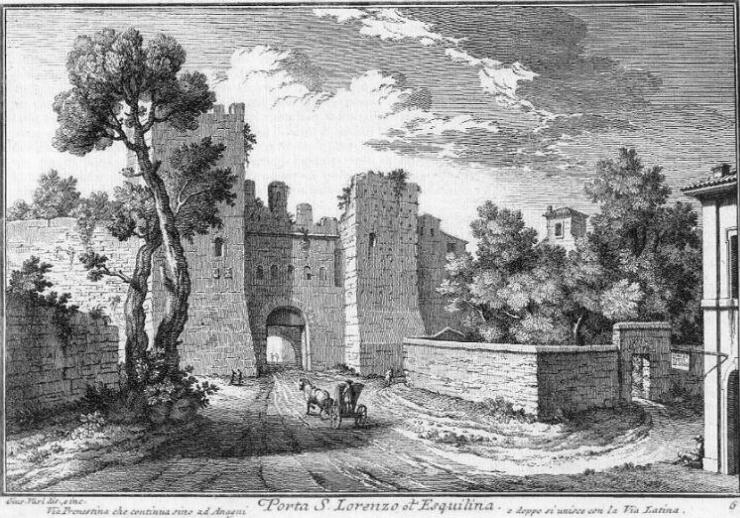 The reference to S. Lorenzo is due to the fact that the gate is not far from S. Lorenzo fuori le Mura. At the time of Vasi it was known also as Porta Esquilina, because it is located on the eastern end of the Esquilino hill. Today it is usually referred to as Porta Tiburtina because it is the starting point of Via Tiburtina, the road leading to Tivoli, the ancient Tibur.
The view is taken from the green dot in the small 1748 map here below which shows: 1) Porta S. Lorenzo; 2) Arco Trionfale di Papa Sisto V; 3) S. Bibiana; 4) Via Collatina. 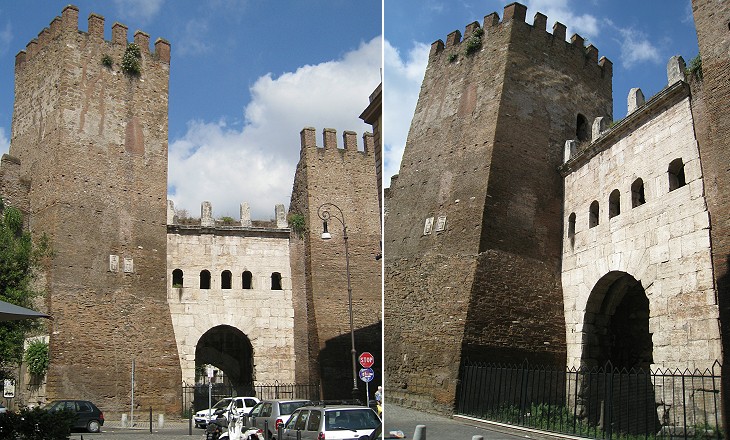 The gate is unchanged, but the level of the street is higher than it was in the XVIIIth century so that it cannot be used any longer. The area outside the gate was chosen for building houses for railwaymen (Stazione Termini, the central railway station, is very close to the gate). Unfortunately poor town planning allowed these apartment blocks to be built a few yards from the walls; for this reason it is difficult to properly show the gate and the nearby walls. Its design dates back to Emperor Honorius. 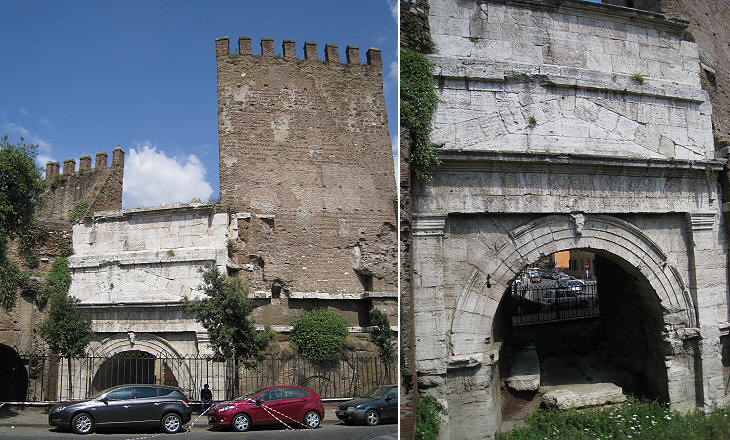 The inner side of Porta S. Lorenzo is not a gate, but a triumphal arch built across Via Tiburtina by Emperor Augustus to celebrate repairs/improvements he made to the aqueduct system of Rome, the main one being the construction of Aqua Iulia. The gate was also known as Porta Taurina (It. toro means bull) after the bucranium (ox skull) on the arch (it is shown in the image used as background for this page). 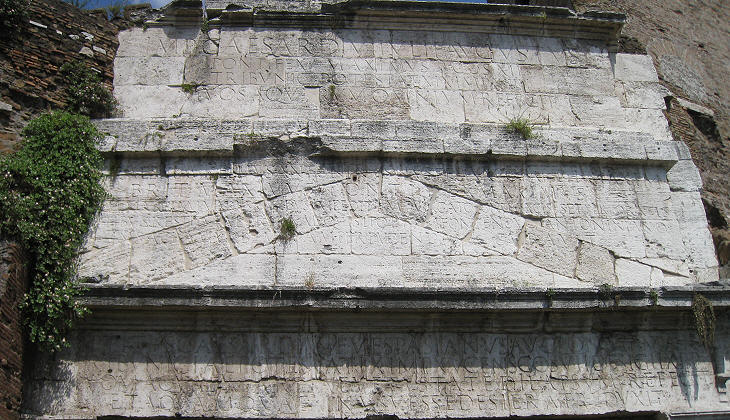 The three conduits of the aqueducts above the arch with the inscriptions celebrating improvements to them which were made by Augustus (above), Caracalla (middle) and Titus (below). Similar inscriptions can be seen at Porta Maggiore

As they were digging in the Field next the Gate of St. Laurence without the Walls, I saw several Urns thrown up; some Plain and others of speckled Marble, nor was there much distance between the Places where they have been first laid, and they were certainly Sepulchres. Some few had Inscriptions, were open on the sides, or had the Covers broken which had been knock'd off to look for hidden Treasures so that nothing was left in them.
Flaminius Vacca's 1594 account of discoveries of antiquities which took place in his lifetime, as quoted in "The Travels of the Learned Father Montfaucon from Paris thro' Italy - 1712" 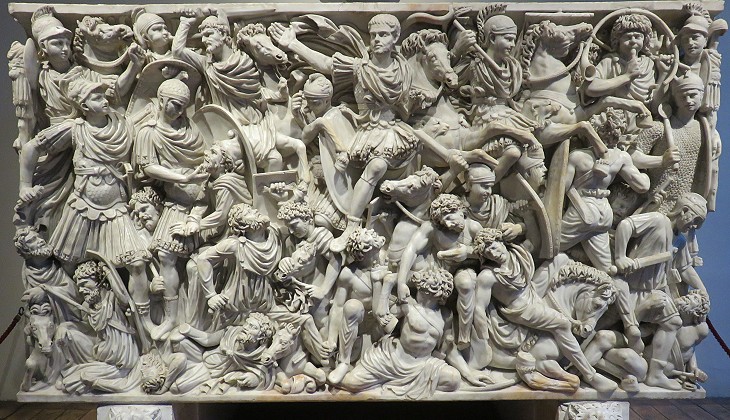 The arch was outside the pomerium, the boundary of the City of Rome, and tombs were built in its proximity along Via Tiburtina, before the construction of the walls in 275 AD. In 1621 a large sarcophagus was found near the arch. At that time the Pope was Gregory XV and his nephew Cardinal Ludovico Ludovisi was in charge of state affairs. The sarcophagus became one of the masterpieces of the Collezione Ludovisi. 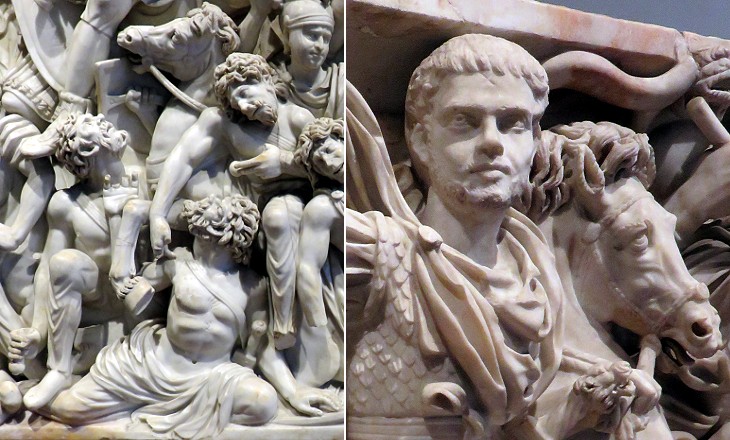 The young Roman commander at the centre of the scene is thought to be one of the sons of Emperor Decius who ruled in 249-251. Comparisons have been made with Sarcofago di Portonaccio, another large sarcophagus found along Via Tiburtina and showing a battle between Romans and barbarians. The latter appears to depict an actual scene of fight, whereas Sarcofago Grande Ludovisi could have had a more complex symbolic meaning. The barbarians seem to die because of illness rather than because of the fight. Their portrayal was most likely influenced by a major pestilence which began to strike the Empire in 250. The young commander does not seem to care about the fight. He is looking elsewhere and perhaps he is bidding farewell to his relatives. The "x" scar on his forehead was perhaps due to an initiation rite.
You may wish to see other sarcophagi which were decorated with a complex scene at Palazzo Mattei and at Durocortorum (Reims).

Centrale Montemartini: sarcophagus found in the late XIXth century near Porta Tiburtina (first half of the IIIrd century AD - see a list of sarcophagi which were found in Rome)

This sarcophagus was not made to order and the portraits of the dead couple left the workshop in half-finished condition. They should have been completed when the sarcophagus had reached its final destination and was sold, see another case of "unsold" sarcophagus at Musei Capitolini. Other works of art found near the gate: (above) Musei Vaticani: sarcophagus portraying the surrender of barbarians (late IInd century AD); (below-left) Brussels Art & History Museum: bust of C. Aurunceius Princeps, a freedman, from a family tomb which was discovered in 1880; (below-right) Centrale Montemartini: statues from a nymphaeum (fountain) which were found in 1888 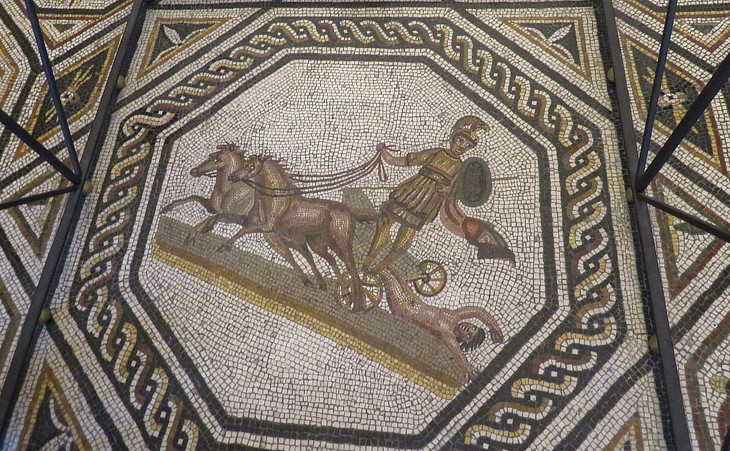 Musei Vaticani: floor mosaic depicting Achilles dragging the body of Hector which was found in 1845 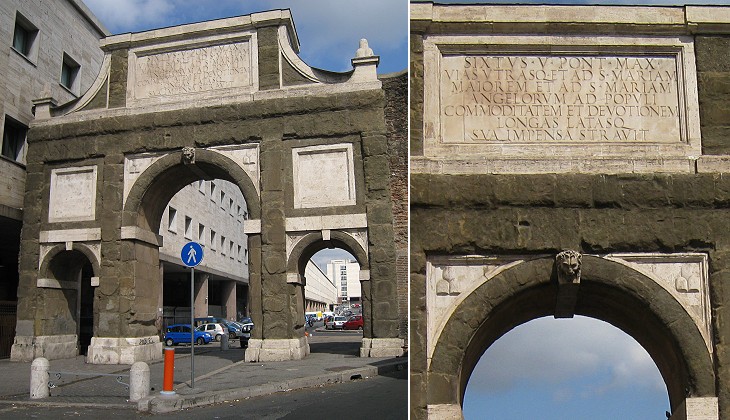 (left) Triumphal arch and behind it the eastern side of Stazione Termini; (right) inscription on its southern side

In 1585 Pope Sixtus V celebrated the completion of Acqua Felice, an aqueduct which carried water to the northern parts of Rome and ended at Mostra dell'Acqua Felice, by erecting a triumphal arch a short distance from that built by Augustus. It was decorated with the heraldic symbols of the Pope which included a lion and three mountains. The inscription on the southern side of the arch celebrates the opening of two roads which led to S. Maria Maggiore and to S. Maria degli Angeli: they increased the value of Pope's large villa between the two churches.

(above) Reconstructed tomb; (below) inscriptions on the short side

Via Collatina was a minor road which linked Rome with Collatia, an ancient town 8 miles east of the city. It branched off Via Tiburtina very near the gate and it run eastwards parallel to it and to Via Prenestina. In 1935, during sewage excavations, a small mausoleum of the early Ist century AD was found at a depth of 5m/15f. It still contained a skeleton and two small vessels. It was filled with earth, most likely because a flood covered it in the IIIrd century. It had a (lost) small dome and it was faced with travertine. Two inscriptions indicated its size: IN FR(ons) P(edes) XXXII (32 ft on the front); IN AGR(o) P(edes) XX (20 ft deep). These inscriptions are not unusual, because they indicated the area allocated to the tomb from a legal point of view and they can be found also outside Italy, e.g. at Narbonne. 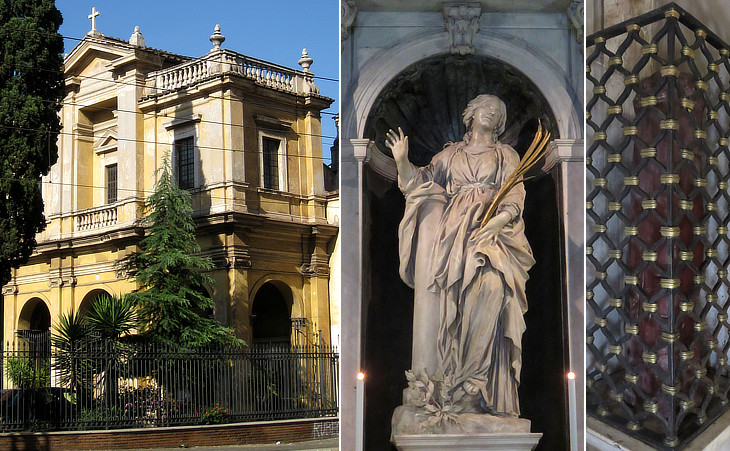 (left) S. Bibiana - façade; (centre) statue of St. Bibiana (Vivian); (right) column to which the martyr was tied; the wrought iron case resembles the design of that in the balustrade of Ponte S. Angelo

The small church of S. Bibiana was built on the site where the young martyr was tied to a column and lashed to death; Gian Lorenzo Bernini had already a solid reputation as a sculptor when in 1625 Pope Urban VIII commissioned him the restoration of this church. As an architect Bernini did not fare that well at S. Bibiana, but that of St. Vivian is the first of a series of statues of female saints in ecstasy, e.g. St. Teresa. In line with the recommended iconography she was portrayed next to the symbol of her martyrdom: the column to which she was tied. 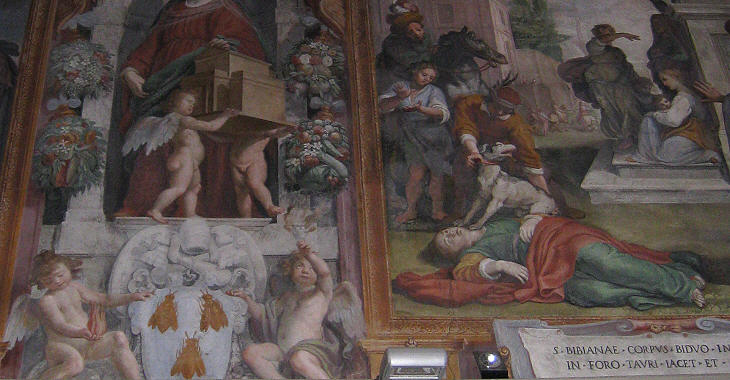 Fresco by Agostino Ciampelli depicting a scene of the life of St. Vivian

In the second half of the XVIth century the Popes issued guidelines on the decoration of churches and in particular on the subjects of paintings: the objective was to emphasize the role played by the early martyrs to promote the Christian faith. These guidelines led to some rather gruesome results.
The subjects commissioned by Pope Urban VIII for S. Bibiana followed these guidelines, but the general mood was no longer that of the Counter-Reformation and the frescoes by Florentine painter Agostino Ciampelli are an elegant and colourful illustration of early XVIIth century Rome, rather than the depiction of dramatic events. Ciampelli framed the paintings with numerous decorative elements, including the coat of arms of the Pope. 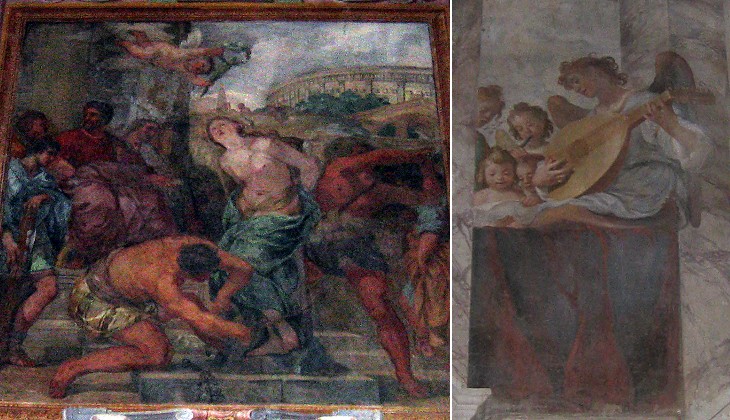 Ciampelli was assisted by Pietro Berrettini, a young painter from Cortona in Tuscany who became one of the key artists of XVIIth century Rome with Bernini and Francesco Borromini. He is best known as Pietro da Cortona. He worked on three frescoes where he showed his talent and also his interest in ancient buildings; in the upper part of the scene shown above he painted a reconstruction of Colosseo. A few years later Pope Urban VIII commissioned him the decoration of the largest hall of his family palace; its ceiling is regarded as a masterpiece of illusionistic painting.

The Walls between Porta San Lorenzo and Porta Maggiore 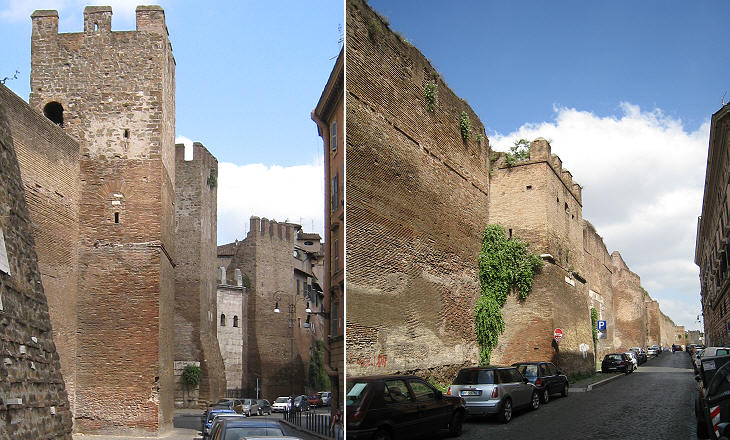 View of the walls to the south of Porta S. Lorenzo

High towers which were rebuilt by Pope Nicholas V characterize this section of the walls, but there are coats of arms showing restorations and improvements made at a later time. 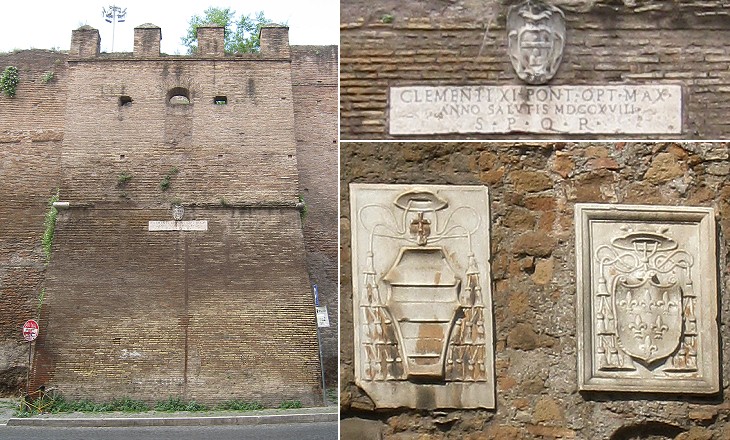 (left) Tower restored by the Senate of Rome in 1718; (right-above) coat of arms of Pope Clement XI and inscription explaining that the restoration was paid for by the City of Rome; (right-below) coats of arms of a Cardinal Carafa (left) and of a Cardinal Farnese (right), the former is among the very few coats of arms of the Carafa which one can see in Rome, because at the death of Pope Paul IV Carafa many of them were destroyed