in the Churches of Rome
(the martyrdom of St. Agatha - detail - in S. Agata dei Goti)

Idolatry: this was one of the charges brought against the Roman Catholic Church by many Protestant leaders in the XVIth century: the Renaissance paintings and statues which embellished the churches of Rome were seen as proof of a proclivity towards a form of idolatry, especially because, unlike the medieval works of art, they were clearly inspired by pagan patterns of the ancient Greek and Roman world.
It was not the first time this accusation had been raised: between 714 and 740 the Byzantine Empire had been upset by a quarrel on the legitimacy of sacred images: the eastern provinces of the empire, which were threatened by the Muslim caliphates (where the representation not only of human beings, but even of animals was strictly forbidden), were in favour of drastically limiting the use of sacred images, while the western provinces of the empire (which included Rome and Ravenna) saw in the use of sacred images a way to absorb the residual pockets of paganism surviving in the countryside (paganism after pagus, country district) or among the barbarian tribes.
In both circumstances the Roman Catholic Church eventually stood for continuing the use of sacred images as a tool of communication and evangelization. 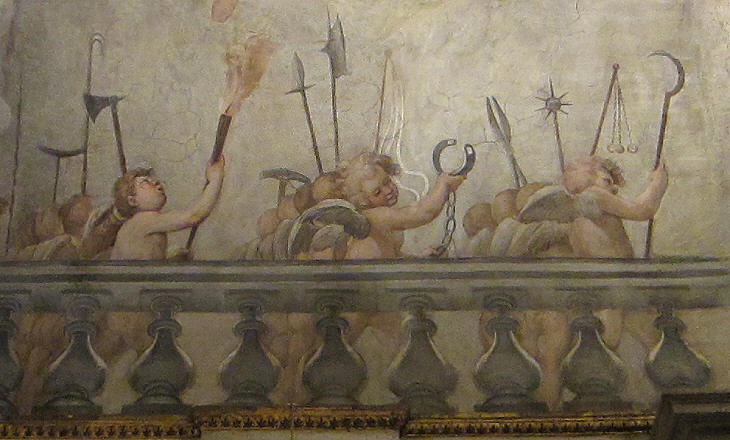 In the second half of the XVIth century this decision was accompanied by a series of recommendations about the subjects to be portrayed: in particular it was recommended to emphasize the role of the ancient martyrs and their heroic sacrifices. This approach however was criticized by many XVIIIth century Protestant travellers:
What pity it is, that the labours of painting should have been so much employed on the shocking subjects of the martyrology. Besides numberless pictures of the flagellation, crucifixion, and descent from the cross, we have Judith with the head of Holofernes, Herodias with the head of John the Baptist, Jael assassinating Sisera in his sleep, Peter writhing on the cross, Stephen battered with stones, Sebastian stuck full of arrows, Laurence frying upon the coals, Bartholomew flayed alive, and a hundred other pictures equally frightful, which can only serve to fill the mind with gloomy ideas, and encourage a spirit of religious fanaticism, which has always been attended with mischievous consequences to the community where it reigned.
Tobias Smollett - Travels through France and Italy - 1766 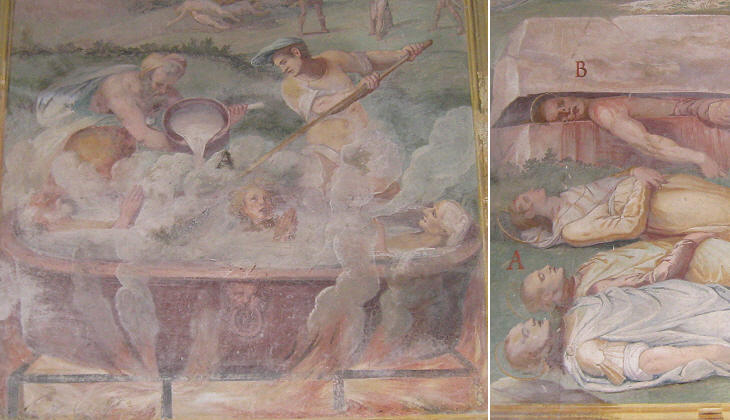 In 1583 Pope Gregory XIII commissioned a series of frescoes to Niccolò Circignani, known as il Pomarancio after the small town near Pisa where he was born; these paintings portrayed the death of the Apostles and of the most popular martyrs and they complied with the new "communication" policy of the Church, which included a rigid iconography for the portrayal of saints to make them immediately identifiable.
This cycle of frescoes became a sort of reference book for all Roman painters. 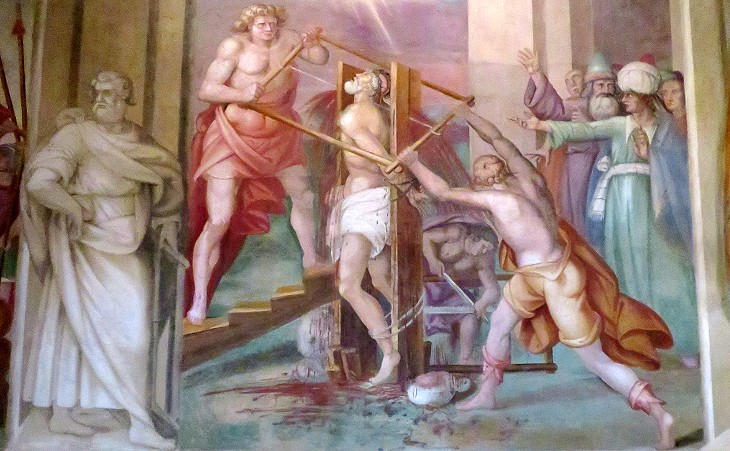 Towards the end of that century the Roman Church had overcome its worst period and Pope Clement VIII was able to celebrate the 1600 Jubilee by restoring many ancient churches.
SS. Nereo ed Achilleo is a small church in a location which still retains some of the countryside appearance it had in the past. The church is not a parish and it is open almost exclusively for weddings. The subject of the frescoes, which entirely cover its walls, could not be less in tune with the celebration of a festive ceremony.
Cardinal Cesare Baronio (1538-1607) was among those who had a leading role in contrasting from a cultural viewpoint the theories of the various Protestant confessions. His Annales ecclesiastici, a history of the Church, emphasized the role of the Roman Church in the early centuries of Christianity and theorized the rightness of preserving the monuments of Ancient Rome as historical evidence of the miracles, martyrdoms and other memorable events of the first developments of the new faith. He developed the iconographical plan of the frescoes decorating SS. Nereo ed Achilleo for the 1600 Jubilee which was based on the martyrdoms of the Apostles and St. Paul. The design and the execution of the frescoes is traditionally attributed to il Pomarancio. The final result is that, despite the most gruesome details and the blood spilt all over the place, the neutral light and the pastel colours lead the viewer to believe he is being narrated a gentle fable, rather than a dramatic event. 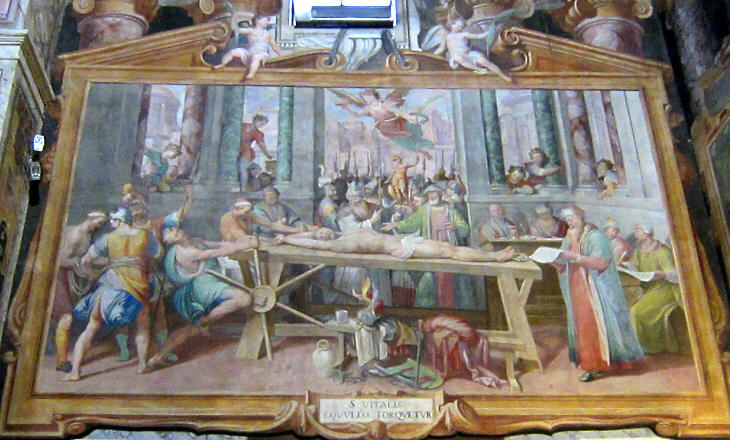 S. Vitale is another minor church which was entirely decorated with frescoes at the end of the XVIth century: it was in a suburban area, while today it is entirely surrounded by late XIXth century buildings. The late mannerism style and the light colours are very decorative, but the drama of the scene portrayed above hits the viewer: it impacted even more the viewer of the year 1600, because, while in SS. Nereo e Achilleo the head of St. Simon perfectly sawed into two halves raised just an anatomical curiosity, the man lying on the rack was not the nearly unknown martyr to whom S. Vitale is dedicated, but rather (for the 1600 viewer) Giacomo Cenci, who, having been tortured on the rack, eventually confessed the role he and his sister Beatrice had had in the killing of their brutal father. The individual viewing this fresco in 1600 would also be reminded of the philosopher Giordano Bruno accused of heresy, who did not abjure his opinions and was burnt alive in Campo de' Fiori. The details of the rack show that the painter was well aware of its mechanisms, because in that period it was routinely used by the Roman prosecutors, in particular by those of Tribunale del Sant'Uffizio (o Inquisizione). Even when the prosecutors had gathered enough evidence to substantiate the charge, they made use of the rack to obtain a full confession: in this way they thought they had helped the culprit by saving his soul, a very noble aim indeed. 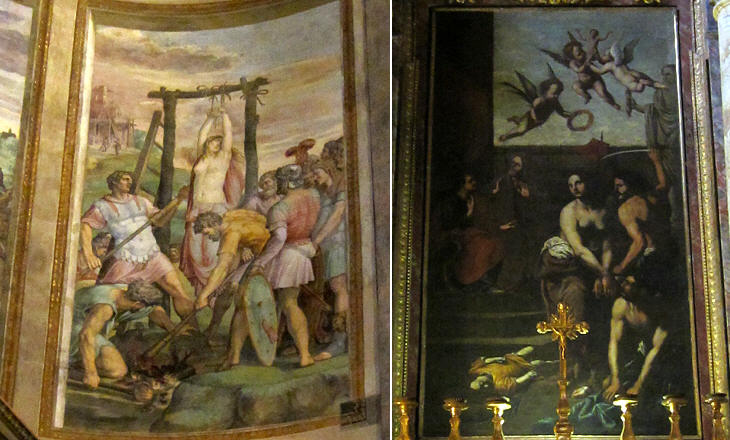 Sadism: form of sexual perversion marked by love of cruelty; deriving of pleasure from inflicting or watching cruelty. The works of art portraying tortures inflicted on some heroines of Christianity lend weight to the suspicion that sadism existed well before Marquis de Sade gave his name to it. In his Voyage en Italie he described how he enjoyed the sight of some works of art decorating the Roman churches: in particular the statue of St. Cecilia. 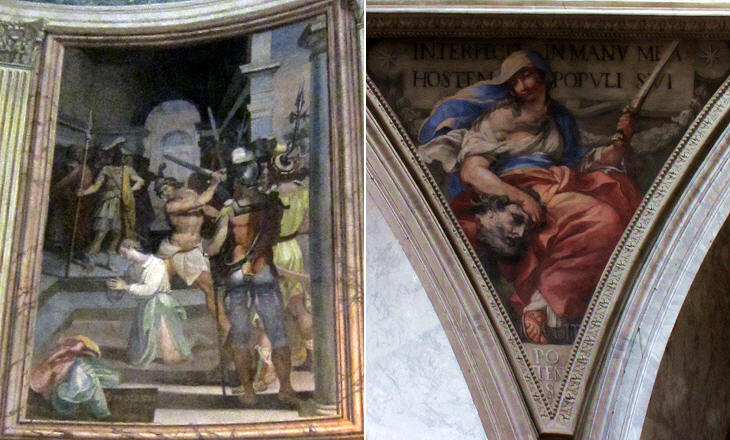 Charles Dickens wrote a very interesting account of a beheading he saw in Rome in 1845. It was the usual way executions were carried out and in general they attracted a lot of people. So the Romans were accustomed to seeing heads rolling into a basket and then executioners holding them by the hair and showing them to the people. It is not unusual to see paintings and sculptures showing beheadings and not only with reference to the martyrdoms of saints. 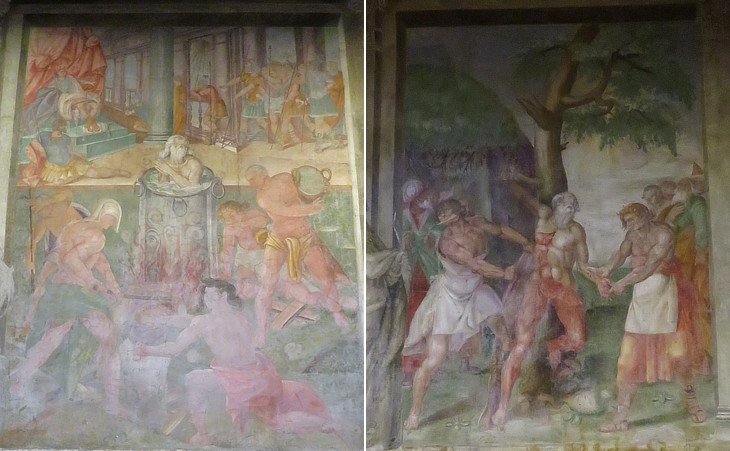 A small chapel was built on the assumed site where St. John was thrown into a cauldron of boiling oil (but was not harmed); it is not far from SS. Nereo e Achilleo.
In 1571 the Turks, breaking the terms signed to obtain the surrender of Famagosta, flayed alive Marcantonio Bragadin, the Venetian commander of the fortress. This event, rather than the martyrdom of St. Bartholomew, is what the 1600 viewer saw in a gruesome painting in SS. Nereo ed Achilleo (or perhaps the punishment of Marsyas which was depicted in a Roman sarcophagus). 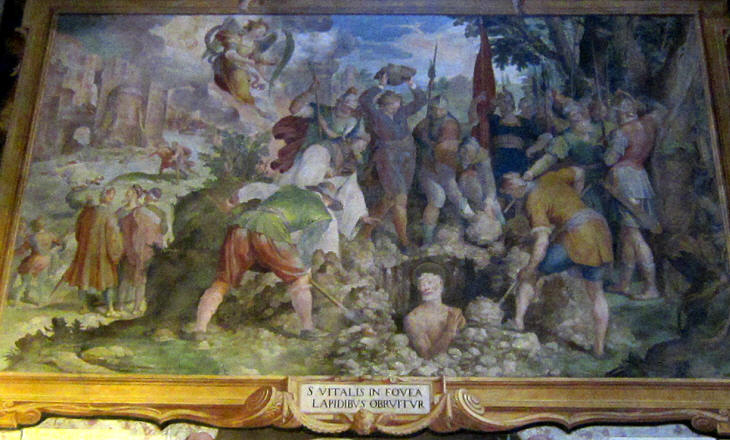 Dickens described the paintings he saw in S. Stefano Rotondo as a panorama of horror and butchery, a sort of catalogue of all the conceivable means to torture and put to death a human being: the fresco shown above combines two different capital punishments: stoning, which is usually associated with punishment of adulterers, and burying alive, the melodramatic fate of Aida and Radames. Ciampelli's bright colours however soften the horror of the event. Mannerist painters portrayed the most bloody and horrific martyrdoms in such a formal and decorative way, that, notwithstanding the subject, their paintings looked "nice". It was the task of a great painter to show the dramatic end of the first saints. Caravaggio did not indulge in gruesome details, but his use of light and his not idealized bodies conveyed a pathos which eventually led some of those who had commissioned him a painting, to refuse it because of its being too real. 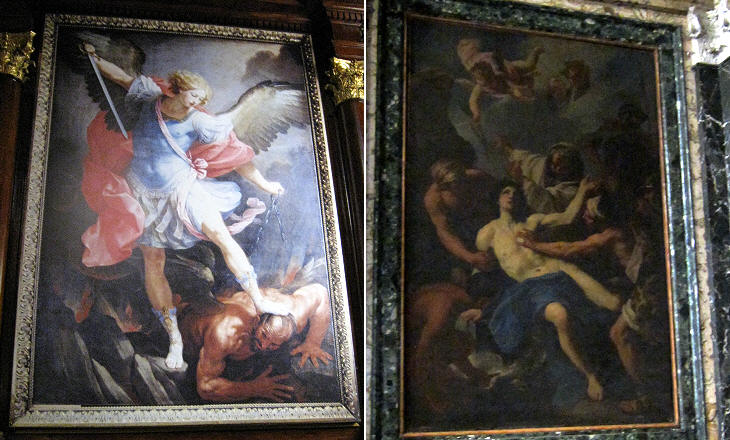 This figure of Guido's, is the Catholic Apollo. Like the Belvedere God, the Archangel breathes that dignified vengeance which animates without distorting; while the very devil derives importance from his august adversary, and escapes the laugh which his figure usually provokes.
Joseph Forsyth - Remarks on antiquities, arts, and letters, during an excursion in Italy in 1802-1803.
Caravaggio had many followers and soon no painter could disregard the use of light he had introduced: at this point the recommended iconography for portraying saints was adjusted to the new way of painting: the martyrdoms were no longer shown as they occurred, but through something which reminded people of the way the martyrs had been put to death, or in a phase preceding the actual event: so Guido Reni showed St. Michael while he just threatens the Evil and St. Lawrence was portrayed while he was being pushed towards the almost hidden grill, rather than while actually suffering on it.
The image shown as background for this page portrays the Flagellation of St. Gervasius in S. Vitale.