Collegio Germanico
(Vasi at work in the Grand View of Rome)

Links to this page can be found in Book 9, Map C2, Day 4, View C6, Rione Ponte and Rione Sant'Eustachio. 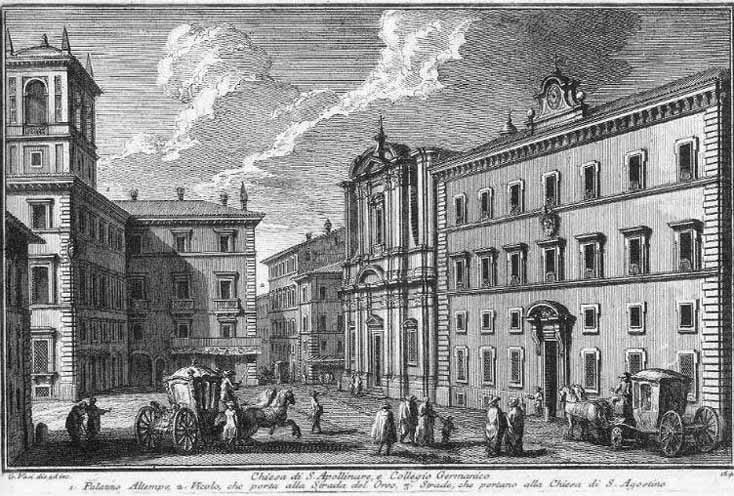 When Giuseppe Vasi published this etching in 1759 S. Apollinare and Collegio Germanico were one of the most recent additions to the monuments of Rome. The church was totally rebuilt in 1748 and the façade of the adjoining palace in 1755. They were both designed by Ferdinando Fuga at the request of Pope Benedict XIV. It is most likely that Vasi developed the plan for the book containing this etching when the Pope was still alive (he passed away in May 1758).
The view is taken from the green dot in the 1748 small map below. In the description below the plate Vasi made reference to: 1) Palazzo Altemps; 2) Street leading to Strada dell'Orso; 3) Street leading to S. Agostino. The map shows also 4) Collegio Germanico; 5) S. Apollinare; 6) Tor Sanguigna; 7) Palazzo Baldassini. The dotted line in the map delineates the borders among Rione Ponte (left) Sant'Eustachio (lower right corner) and Rione Campo Marzio (upper right corner). 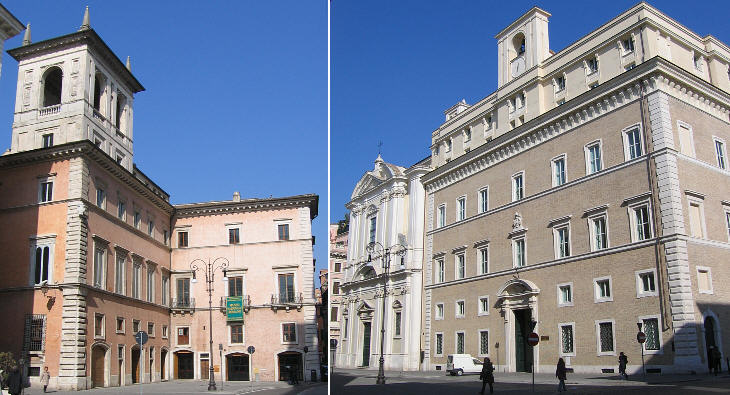 Collegio Germanico has lost its proportions because of a top floor which was added in 1853 with a new clock. In 1776 it was enlarged with a new building near S. Luigi dei Francesi which had a façade identical to that designed by Fuga.
Palazzo Altemps is almost unchanged apart from the disappearance of a long balcony. 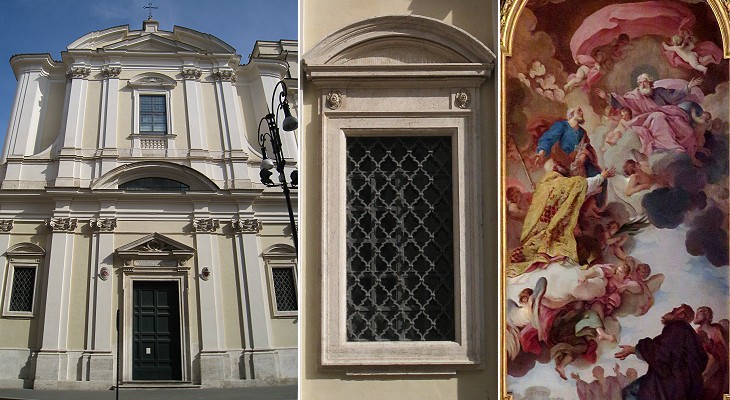 (left) Façade of S. Apollinare; (centre) one of the side windows; (right) Glory of St. Apollinaris by Stefano Pozzi in the ceiling of the nave

The original church was built in the VIIth century at a time when Rome was a Byzantine possession. The exarch, the governor of the Byzantine territories in Italy, resided at Ravenna and he had jurisdiction over Rome which was ruled by a dux. This explains why the church was dedicated to St. Apollinaris, a legendary disciple of St. Peter and the first Bishop of Ravenna to whom large basilicas were dedicated at Classe, the site of his martyrdom and in Ravenna itself.
The original church was repeatedly modified and the level of its floor was raised. In 1574 it was assigned to the Jesuits. You may wish to see it as it appeared in a 1588 Guide to Rome. 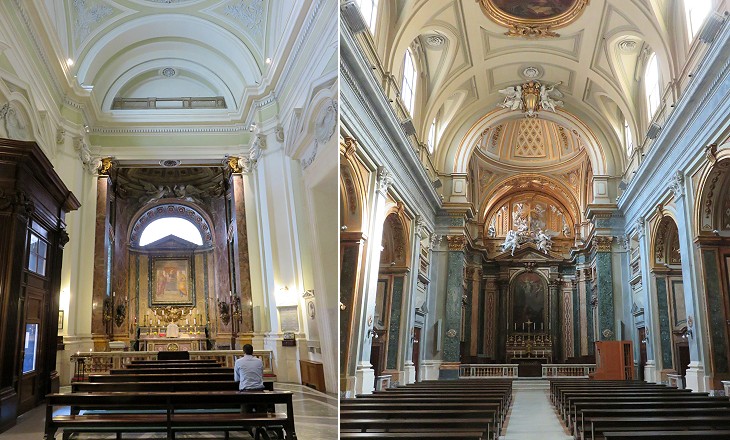 The old church had a portico with a fresco of the XVth century portraying the Virgin Mary which was the object of a special devotion. Fuga designed a sort of small church to house the sacred image. It has a south-north orientation whereas the new church is west-east oriented. Fuga paid special care to ensuring that the new church was well lighted, because the old one was renowned for its very dark interior. 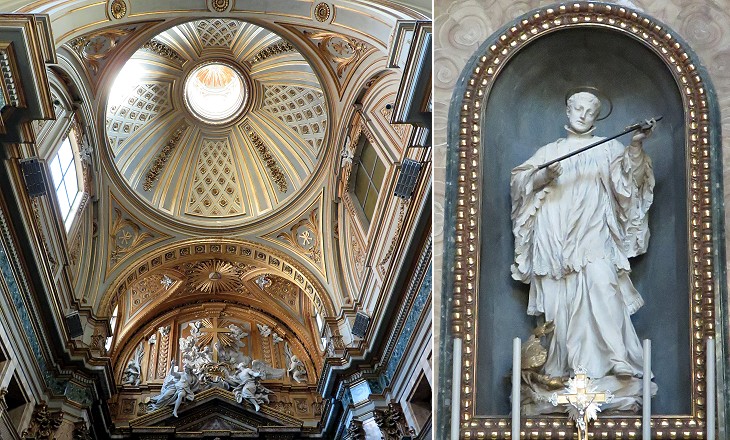 The new church retained some of the works of art of the old one which were rearranged into new chapels. The statue of St. Francis Xavier is a fine work by Pierre Legros. The metal crab at the foot of the saint is a reference to an episode of his travels in the Far East: he lost a crucifix at sea during a storm and the crab brought it back to him. Pierre Legros worked for the Jesuits also at S. Ignazio and il Gesù. 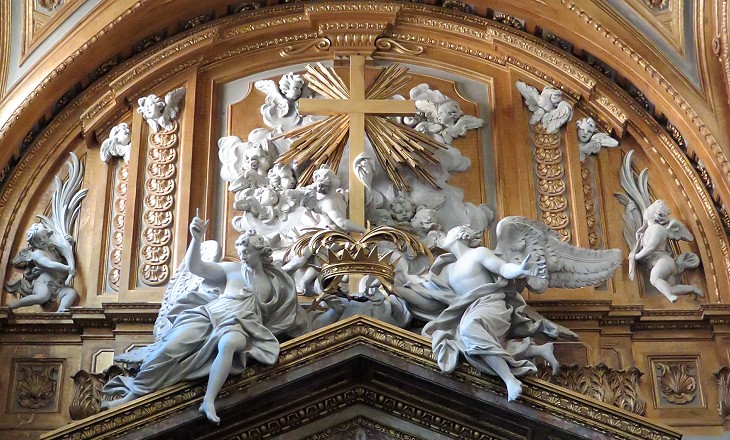 Marble angels and stucco cherubs above the main altar (1746) by Bernardino Ludovisi, another sculptor who worked for the Jesuits at S. Ignazio 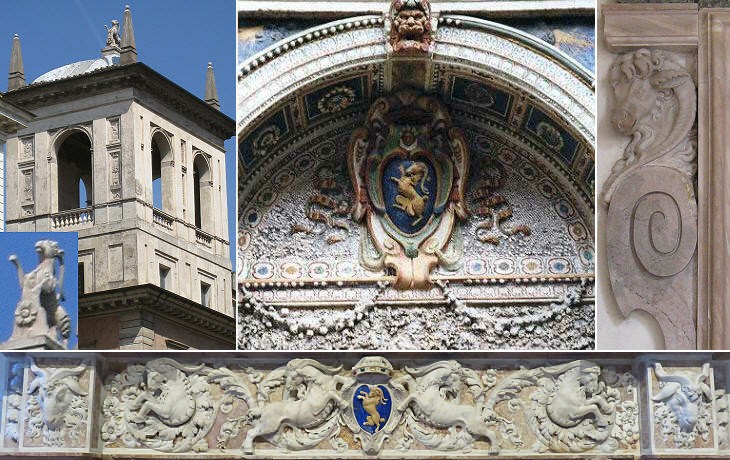 Male goats, the heraldic symbol of the Altemps: (above-left) at the top of the loggia with the five petaled rose of the Orsini (you may wish to see a page with other Roman loggias); (above-centre) in the courtyard fountain; (above-right) on a door); (below) on a mantelpiece

Cardinal Marco Sittico Altemps was the son of Count Wolfgang Hohenems and Chiara Medici, sister of Pope Pius IV. He bought the palace in 1568 and he placed the heraldic symbol of his family (a rampant male goat) almost everywhere; in a few instances it was associated with the rose of the Orsini, because of the marriage of Roberto, Marco's natural son, to Cornelia Orsini in 1576. The palace was renovated between 1577 and the end of the century. Altemps is an Italian distortion of Hohenems. 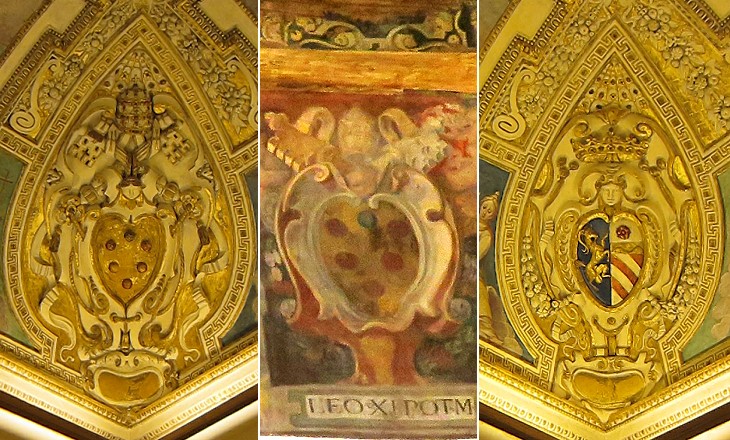 Coats of arms: (left) of Pope Pius IV (by looking more closely at it you will see the image used as background for this page); (centre) of Pope Leo XI; (right) of Roberto Altemps and Cornelia Orsini

The life of Marco Sittico Altemps was marred by a family tragedy: his son Roberto raped a young woman; usually such a crime, when committed by a nobleman, was covered up by providing the woman with a dowry and a husband. It was not so in this case because newly elected Pope Sixtus V decided to show that he was determined to enforce the rule of law in the Papal State and he sentenced Roberto to death. Vainly the old father invoked papal mercy by throwing himself at Sixtus' feet. He built a chapel in S. Maria in Trastevere in honour of Madonna della Clemenza as a sort of prayer for the soul of his son who is buried next to it. In 1595 the palace was inherited by his grandson Giovanni Angelo. 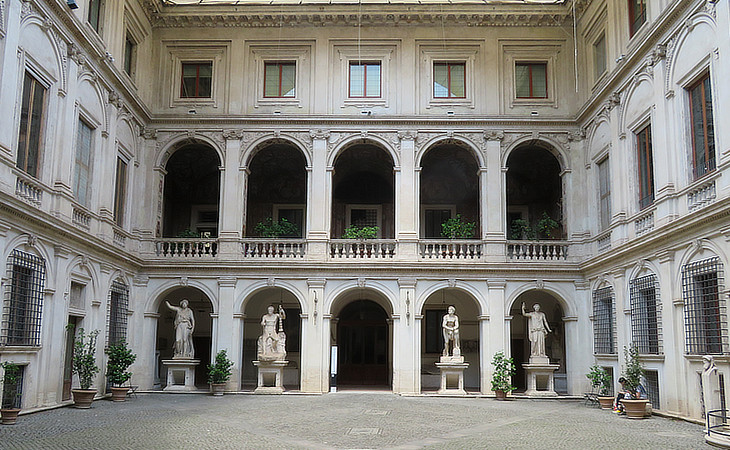 The courtyard was designed by Martino Longhi the Elder and it was decorated with stuccoes bearing the coats of arms of the Altemps and of the Orsini. It contains some of the ancient statues bought by the Altemps, but the palace is today best known for housing the collection which embellished Villa Ludovisi (it is one of the four locations of Museo Nazionale Romano). 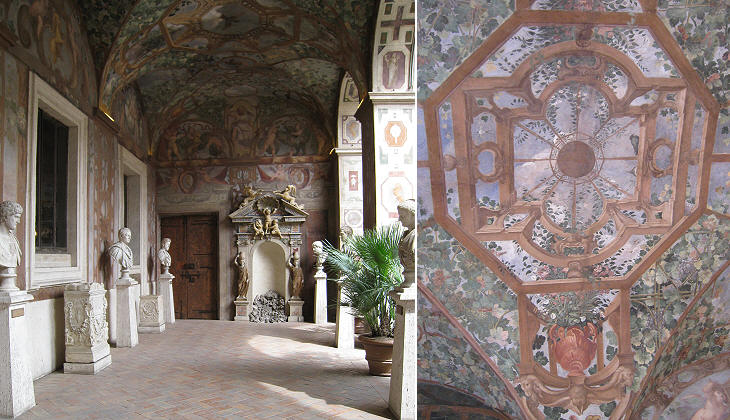 The palace was completed by Giovanni Angelo Altemps who built a chapel adjoining the northern loggia (you may wish to see a detail of its decoration). He owned also Palazzo Rospigliosi, a small villa outside Porta del Popolo, fiefdoms and other villas near Frascati, the town of Soriano al Cimino and the Duchy of Gallese. During the XVIIIth century the Altemps rented the palace or parts of it. They eventually sold it in 1887 and the building was partitioned and redecorated. 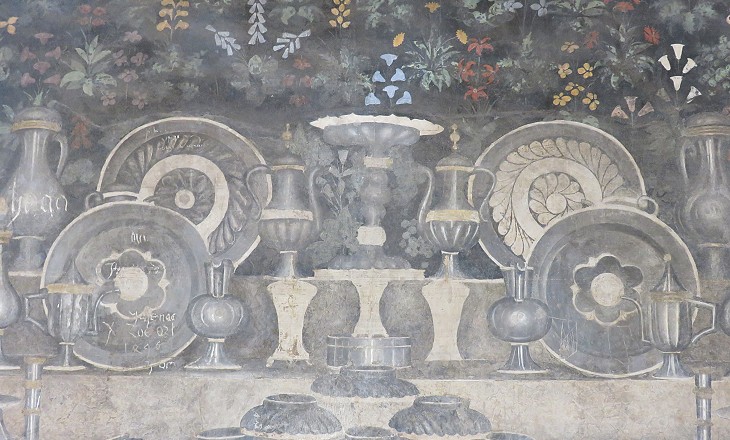 In 1982 Palazzo Altemps was bought by the Italian State and efforts were made to recover its original decoration. One room had a fresco depicting tableware, most likely that which was employed for the banquet of the wedding between Girolamo Riario, nephew of Pope Sixtus IV, and Caterina Sforza in 1477. The palace was originally built for the Riario. In 1511 they sold it to Cardinal Francesco Soderini of a Florentine noble family allied with the Medici. 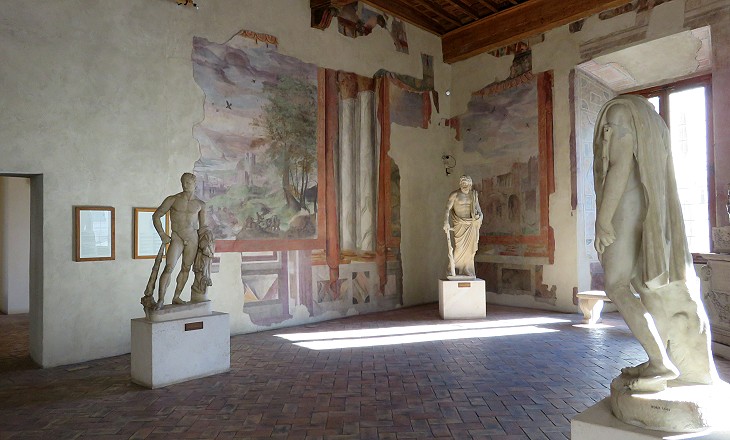 Sala delle Prospettive, in origin it must have been similar to that at la Farnesina 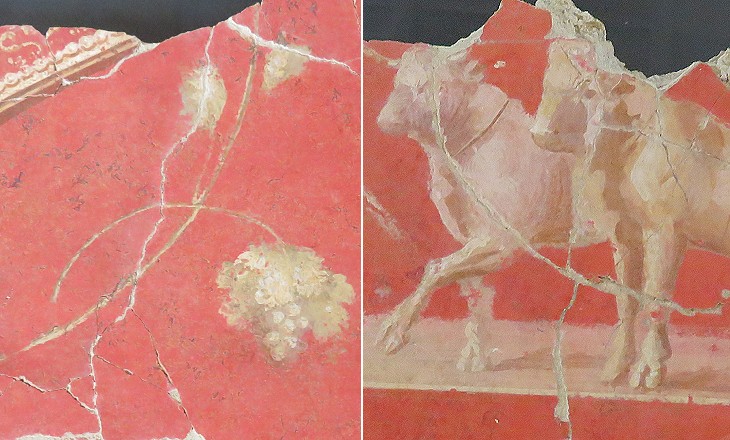 By searching for evidence of the history of the palace in 1991 restorers discovered that the building stood over a Roman house of the Ist century AD. They recovered fragments of its frescoes; they were painted on a red background which is typical of Pompeii. The house was not very far from Stadio di Domiziano. 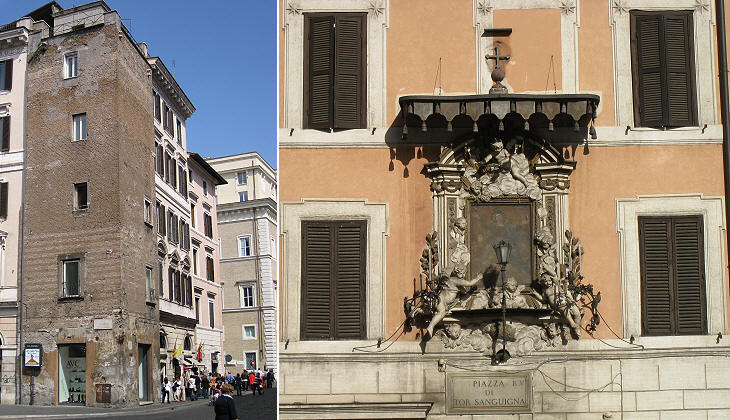 Sanguigna means sanguine, but the name of this medieval tower is not associated with bloody events; it is just named after its owners, the Sanguigni family. The tower shows a structure made of layers of bricks and of layers of small blocks of tufa (i.e. opus listatum). The Sanguigni had embellished the old church of S. Apollinare, but when it was rebuilt in 1748 the family was extinct and these embellishments were lost. The palace opposite the tower has one of the finest madonnelle of Rome. 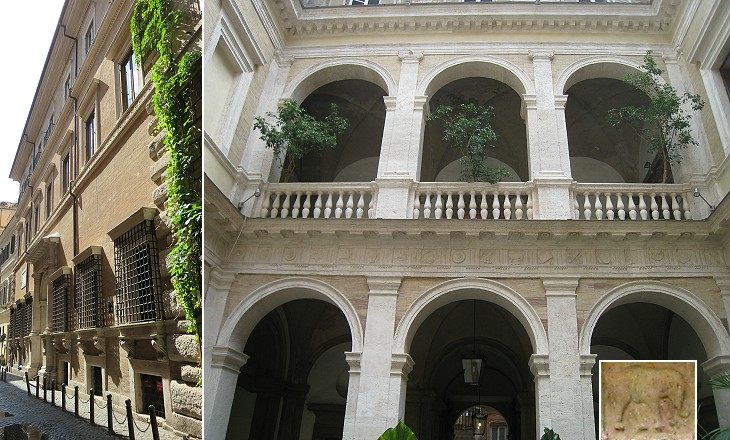 Palazzo Baldassini was quoted in Filippo Titi's 1674 Studio di Pittura, Scoltura et Architettura, which is considered the first detailed description of Renaissance and Baroque Rome, but it was forgotten in most of the guidebooks which followed. Actually the narrowness of the street does not permit a proper view of the palace façade which was designed by Antonio da Sangallo the Younger for Melchiorre Baldassini, an adviser to Pope Leo X.
The courtyard has a fine loggia, typical of Renaissance buildings, and a detail of its decoration is a reference to the Pope because it depicts Hanno, a white Indian elephant which was donated to him by the King of Portugal in 1514. Pope Leo was very fond of his big pet which attended processions and other ceremonies. You may wish to see Hanno in a fine drawing by Raphael (it opens in another window with an image of an actual Indian elephant at the Zoo of Rome) and a conventional depiction of an elephant prior to the arrival of Hanno.