The ancient Romans venerated the Lares, tutelary spirits of the house, in the form of small statues (of men and women), put in high places. These spirits protected also the roads and their statues were placed at road intersections. This practice is at the root of the very large number of sacred images which populated (and to some extent still populate) the streets of Rome. In 1853 a researcher, Alessandro Rufini, listed 2739 sacred images, the majority of which portrayed a Madonna (hence they are called Madonnelle = Little Madonnas).
Some of these images became associated with miraculous events and were moved inside a church (e.g. Madonna dell'Archetto).
This page shows a number of sacred images and has a list of links to pages of this website where other sacred images are shown. Be aware that in Rome there are many more Madonnelle to see.

(left to right) Near Palazzo Mattei, in Borgo Pio and near Palazzo Patrizi

There are no lamps lighted in the streets at night; and all Rome would be in utter darkness, were it not for the candles, which the devotion of individuals sometimes place before certain statues of the Virgin. Those appear faintly glimmering at vast intervals, like stars in a cloudy night.
John Moore - A View of Society and Manners in Italy - 1781
The majority of the images were positioned on the line marking the separation between the ground floor and the first floor. An alternative placement was between two windows of the first floor. The height protected the image from damage caused by the carriages and was consistent with the positioning of images inside churches or chapels. In many cases the images were placed at the corner of a building. Because very often an oil-lamp shed some light on the Madonnelle, they constituted for centuries the only public lighting available in Rome.

(left to right) Opposite Cappella Paolina, opposite S. Maria delle Vergini and near Palazzo Lancellotti

The Madonnelle were a form of popular devotion. In general the rich did not feel these images would add to the beauty and importance of their palaces and only a limited number of palaces show a sacred image. A miraculous event or just a happy event often led the inhabitants of a street or of a building to commemorate it by placing a little Madonna at the corner of the street. In the XVIIth century the development of stucco techniques made affordable to these people the framing of the image in a little stucco relief. Angels holding the image became a common subject of these reliefs or statues. Angels were a typical Baroque theme, but they were popular among the lower classes well into the XIXth century. 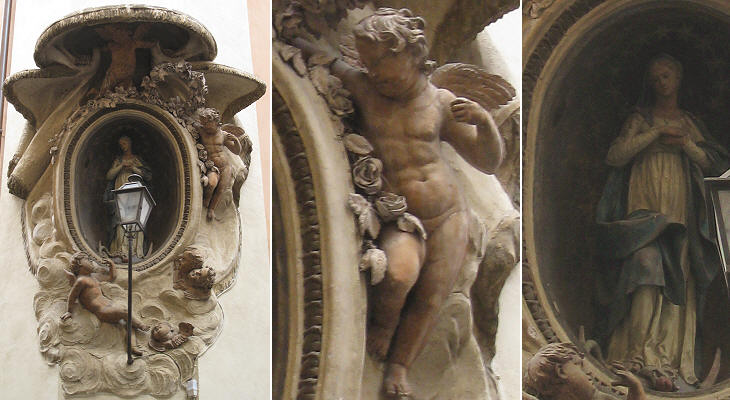 A little baldaquin, sometimes made with metal, gave the image some protection against rain. The more sophisticated stucco reliefs were painted in line with the Baroque tendency to mix painting with sculpture (and architecture).

(left to right) Near Piazza dell'Orologio, in Via della Dataria and in Piazza della Rotonda

Some images were made of rather large paintings, a memory perhaps of the Renaissance habit of painting the façades of the palaces. In these cases the subject of the image was more complex and the painting was most likely the initiative of a brotherhood, if not of the pope. The first two sacred images above are both next to plaques with inscriptions celebrating the opening of a new street.

(left) In Via della Dataria; (centre/right) near S. Eustachio

In some cases the stucco reliefs are so large and ornate that the sacred images are somewhat suffocated. Besides many painted images are almost unreadable. In general we know very little about who designed and executed these images.

The large majority of the Madonnelle have a Baroque appearance, even though they were designed in the XIXth or even in the XXth century. In the late XIXth century, however a certain number of Madonnelle were designed having in mind Renaissance patterns. You may wish to see the sacred images of Vienna. The image above shows an example of the simplest form of Madonnella, most likely the prevailing one until the XVth century. It is however a XXIst century Madonnella. The image used as background for this page shows the stucco frame of the image in the icon of this section.