SS. Celso e Giuliano
(Vasi at work in the Grand View of Rome)

Links to this page can be found in Book 6, Map C2, Day 4 and Day 7, View C4, Rione Ponte, Rione Parione and Rione Regola. 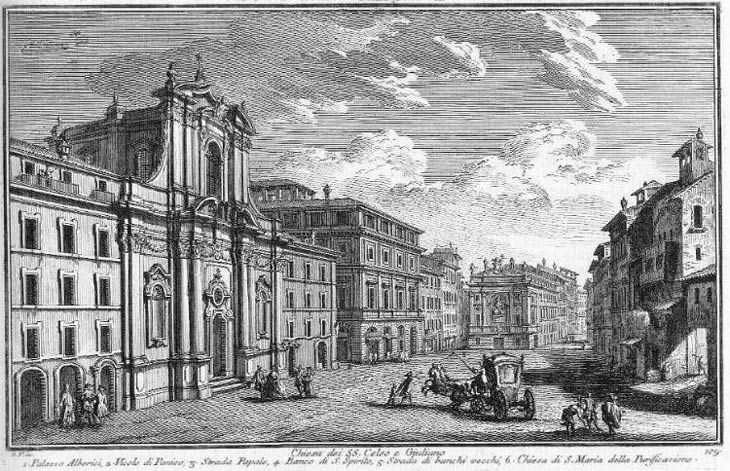 When Giuseppe Vasi published this etching in 1756 he had already shown Ponte Sant'Angelo and Castel Sant'Angelo in other plates and he therefore decided to depict SS. Celso e Giuliano, a parish church, from the northern end of the street, rather than from the southern one together with the bridge and the castle. Similar to what he had done in other plates he greatly enlarged the street and quite strangely he enlivened the scene by portraying some elegant gentlemen and ladies rather than pilgrims on their way to S. Pietro.
The view is taken from the green dot in the small 1748 map here below. In the description below the plate Vasi made reference to: 1) Palazzo Alberini; 2) Vicolo di Panico, a small street leading to Via dei Coronari; 3) Papal Street; 4) Banco di S. Spirito; 5) Strada di Banchi Vecchi; 6) S. Maria della Purificazione. The small map shows also 7) S. Lucia del Gonfalone; 8) Palazzo Sforza Cesarini; 9) Arco dei Banchi; 10) Oratorio di S. Celso; 11) Palazzo del Vescovo di Cervia; 12) Casa di Vicolo Cellini; 13) Palazzo Vecchiarelli. The dotted line in the map delineates the borders among Rione Ponte, Rione Regola (the area around No. 7) and Rione Parione (upper right quarter). 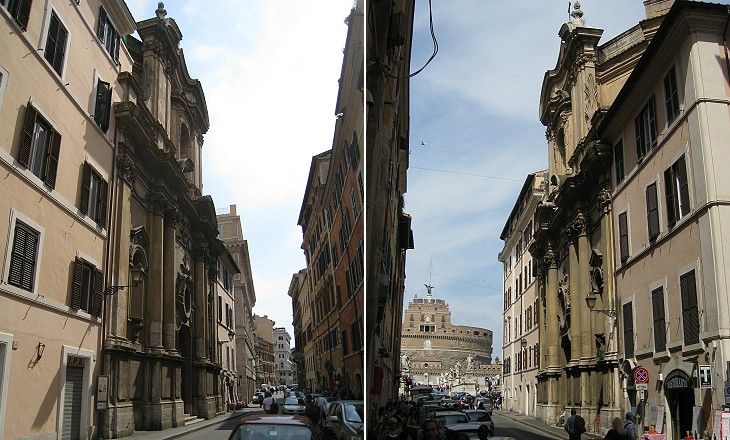 (left) The view in April 2009; (right) the area seen from the southern end of the street

Apart from the size of the street the view is not very different from that shown in the plate. For centuries Ponte S. Angelo had been the main bridge of Rome, but after the city was annexed to the Kingdom of Italy in 1870 town planners decided it could not be modified enough to suit the new needs of Rome. In 1911 Ponte Vittorio Emanuele II, a new large bridge, was built downstream of the old one and a new street by the same name led to it. For this reason no major changes were made to the area where SS. Celso e Giuliano is situated. 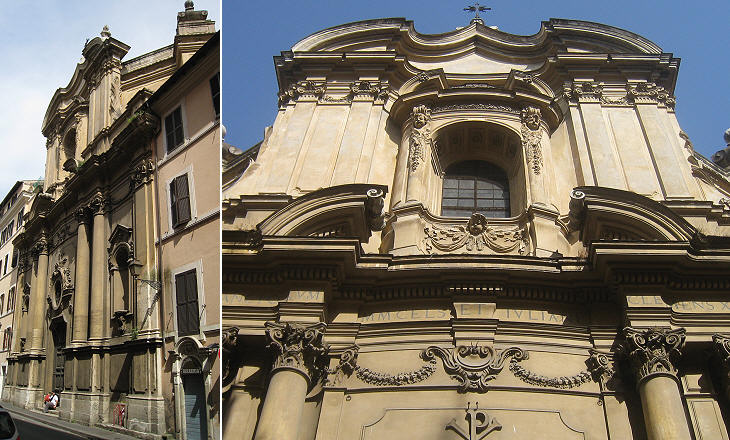 A church by this name is recorded in the year 1008: it was demolished by Pope Julius II to enlarge the street; he commissioned Donato Bramante to design a new building, but this was not completed according to the original plan. Eventually the church was entirely rebuilt by Carlo De Dominicis during the pontificate of Pope Clement XII.
The façade of the church was important because it stood at the beginning of Strada Papale, the route followed by the newly-elected Pope to reach S. Giovanni in Laterano, the cathedral of the Bishop of Rome. He mounted a white horse (or mule) and was followed by a large procession. Along the itinerary he was paid homage to by the various communities (including the Jewish one) living in the neighbourhoods the procession went across. For the occasion ephemeral triumphal arches were built and fake façades covered the buildings in poor condition (you may wish to learn more about this ceremony).

Various details of SS. Celso e Giuliano including its bell tower (another one is shown in the image used as background for this page)

The use of heads of angels as decorative elements brings to mind works by Francesco Borromini, e.g. the interior of S. Giovanni in Laterano. You may wish to see another detail of the façade in a page covering the Laughing Masks of Rome.
The bell tower and small turrets on the roof have an onion shape, which is unusual in Rome, but is typical of Baroque Vienna. 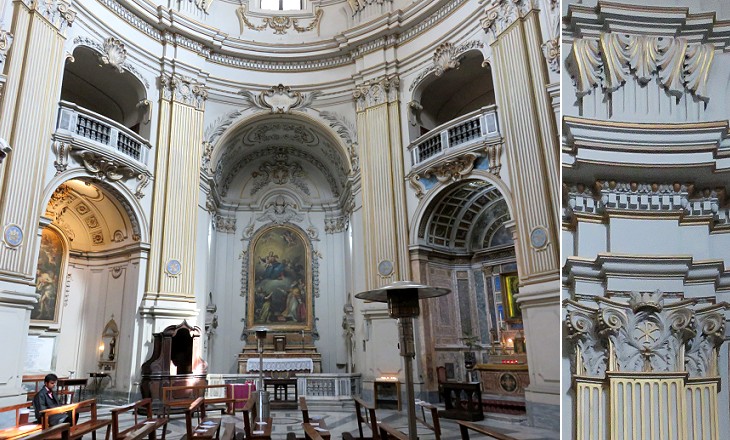 The interior of the church shows even more the influence of Borromini on De Dominicis. The elliptical interior with its concave and convex lines and its elaborate stucco decoration is reminiscent of that of S. Ivo alla Sapienza. 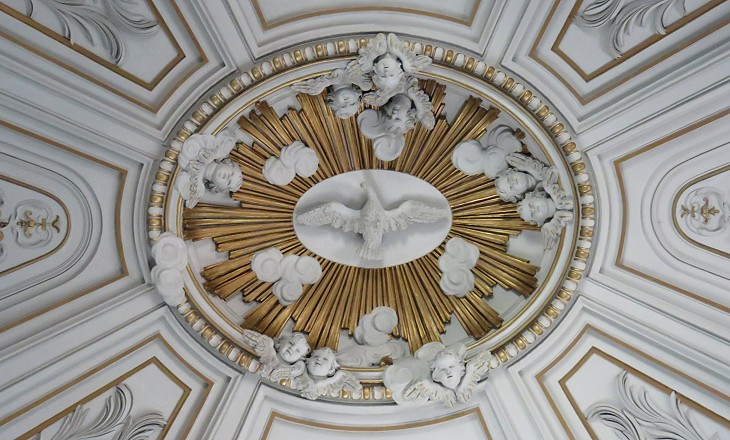 Decoration of the interior of the elliptical dome

A 1981 guidebook noted with reference to the interior of SS. Celso e Giuliano: The decoration is based on very elaborate stuccoes, which once were white. Many travel accounts of the XIXth and XXth centuries mentioned the dim and dingy aspect of the interior of many Roman churches. As a matter of fact stuccoes easily catch dust and lose their decorative effect. 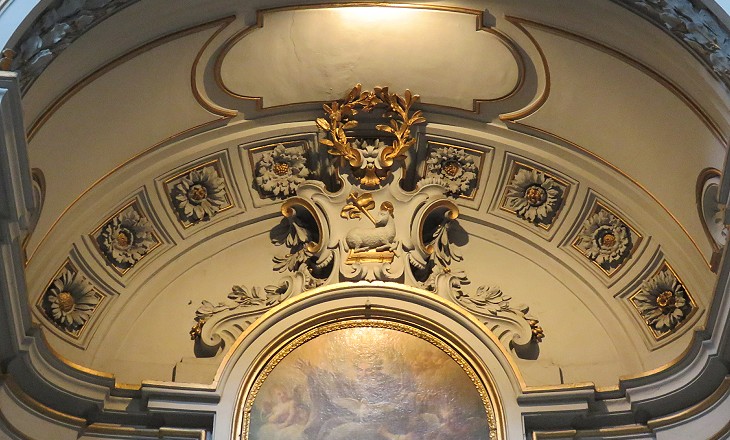 Detail of the Baptismal Chapel

St. Julian is known for having married Basilissa and having decided together with his wife that they would retain their virginity to better serve the Lord. He was killed during the persecution of Emperor Diocletian together with other martyrs, including Celsus, a boy he had converted while in prison. 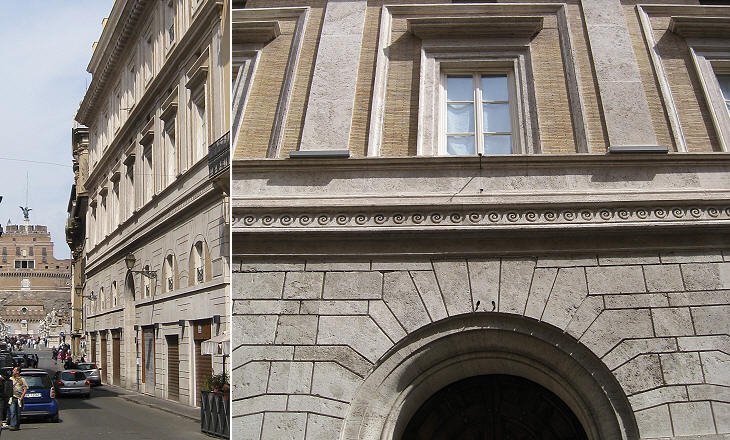 (left) Palazzo Alberini; (right) detail of its design with a Vitruvian scroll

Palazzo Alberini was enlarged in the XIXth century and it has now seven windows instead of four. The palace was built in 1515-1525 and its design was attributed to Giulio Romano by Giorgio Vasari who added that maybe Raphael had contributed to it. 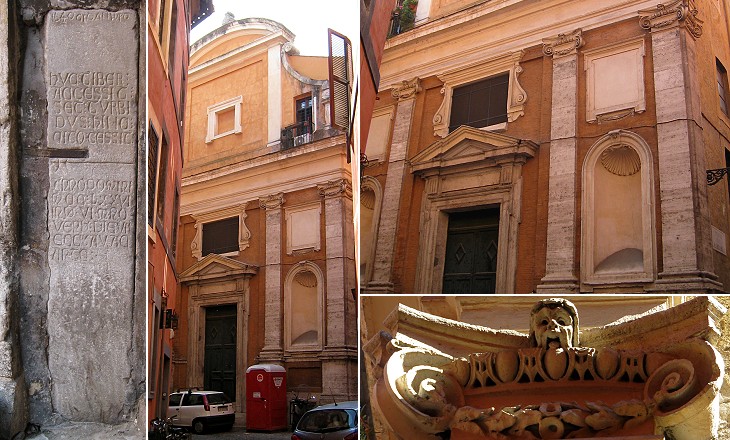 The plate shows a small arch on the right side of the street. One of its pillars has a marble inscription indicating the level of a river flood which occurred in November 1277: it is the oldest existing record of this kind and it was originally placed in the porch of old SS. Celso e Giuliano. Inscriptions recording floods can be found in many parts of Rome and not only in those close to the river, e.g. the marble panel at S. Rocco, but also in areas far from it. The façade of S. Maria sopra Minerva has some almost elegant inscriptions recording floods of the XVIth century.
Oratorio di S. Celso is located behind SS. Celso e Giuliano: it has a finely designed XVIth century façade: it belonged to a brotherhood and thus it is aka Oratorio della Confraternita del SS. Sacramento (Eucharist). 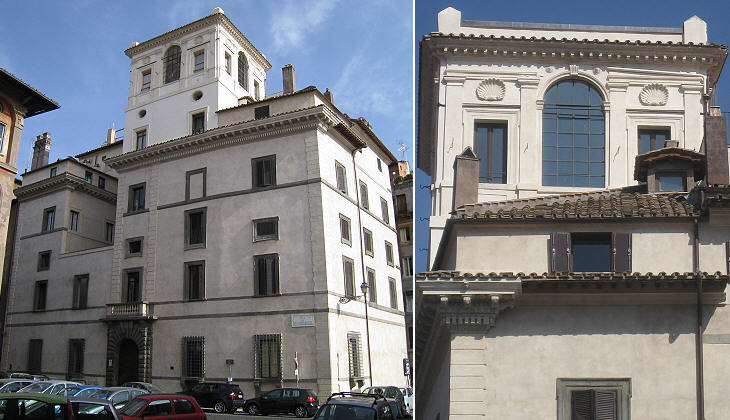 This large late Renaissance building at the beginning of Via dei Coronari was most likely designed by Bartolomeo Ammannati, a Florentine sculptor and architect who often worked in Rome, employed by popes (e.g. Villa Giulia) and rich families (e.g. Palazzo Rucellai Ruspoli and Villa Medici) who came from Tuscany. It does not attract a lot of attention, even though it has one of the first and most elegant Roman loggias. The Vecchiarelli were a family of rich landowners from Rieti. 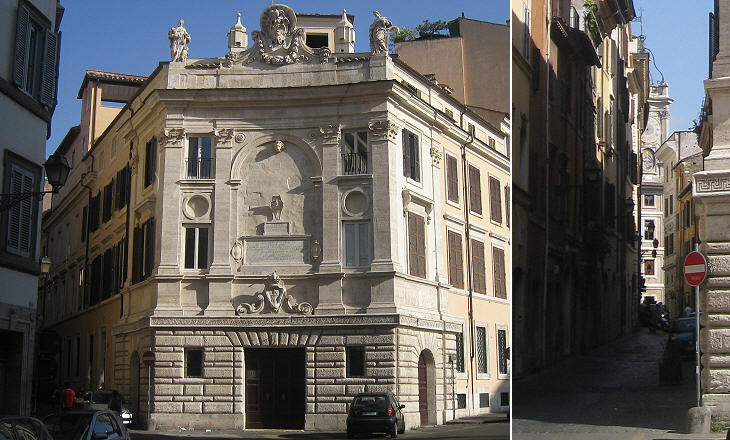 Florentine bankers lived in this area where they had their national church (S. Giovanni dei Fiorentini). The popes felt the need to have their own bank and in 1605 Pope Paul V founded it: it was named Banco di S. Spirito because it was placed under the management of the Commendatore (officer in charge) dello Spedale di S. Spirito.
In 1667 Pope Clement IX relocated the offices of the bank from a nearby small building to this palace which previously housed the Mint. Because Banco di S. Spirito was the new bank, the street of the Florentine bankers was renamed Via dei Banchi Vecchi (Old Banks) and a section of Strada Papale was named Via dei Banchi Nuovi. 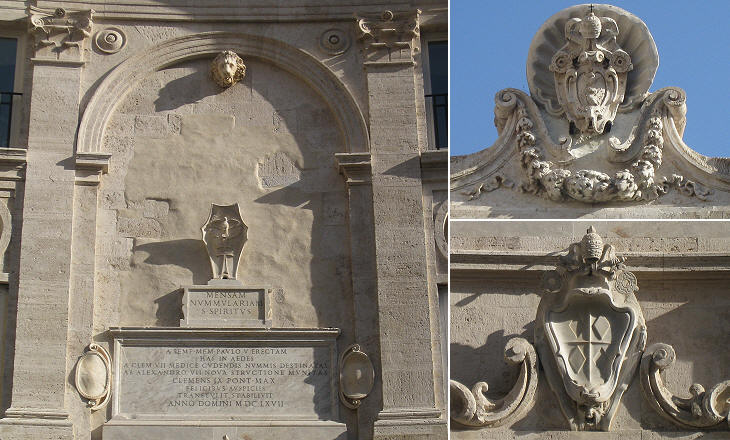 The building was designed by Antonio da Sangallo the Younger for Pope Leo X; its design is remarkable because the façade is slightly concave, a very innovative feature which was greatly praised by Giorgio Vasari.
The small church of S. Maria della Purificazione which stood opposite Banco di S. Spirito was pulled down in 1888. It was one of the churches belonging to the French Nation. The reliefs which decorated its entrance were moved to the courtyard of Palazzo di S. Luigi. 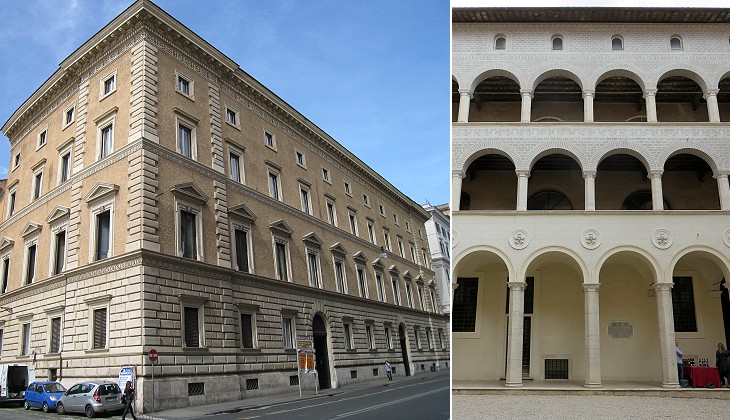 The palace was built by Cardinal Rodrigo Borgia (who became Pope Alexander VI in 1492) when he was appointed Chancellor by his uncle Pope Calixtus III. The façade in Via dei Banchi Vecchi was largely modified in the XVIIIth century and in 1888 the building was in part demolished and rebuilt to make room for Corso Vittorio Emanuele II. Only by walking into the courtyard one can see its Renaissance design. 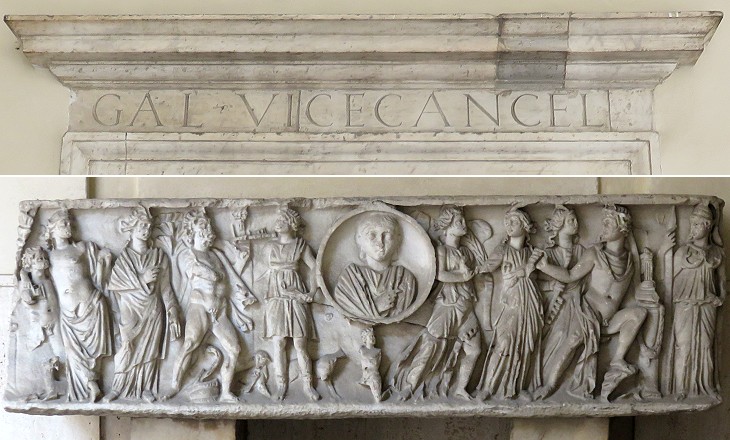 (above) Inscription on a lintel with the name of Cardinal Galeotto Franciotti della Rovere, nephew of Pope Julius II and Vice-Chancellor in 1505-1508; (below) ancient sarcophagus in the courtyard. It depicts the contest between Apollo (right) and Marsyas, a satyr (left); it was not a made to order sarcophagus as you can learn in a page about the manufacturing of sarcophagi

In 1536 the palace was assigned to Cardinal Guido Ascanio Sforza. In 1673 Federico Sforza married Livia Cesarini, the last of her family, and added her surname to his own. Near Palazzo Sforza Cesarini in Via dei Banchi Vecchi there is an interesting house built by Gian Pietro Crivelli, a goldsmith from Milan, in 1538. The rich decoration is by Giulio Mazzoni (who extensively decorated Palazzo Spada): the military emblems were familiarly called pupazzi (puppets) and so the building is known as Palazzo dei Pupazzi (there is another palace by this name near S. Giuseppe a Capo le Case). 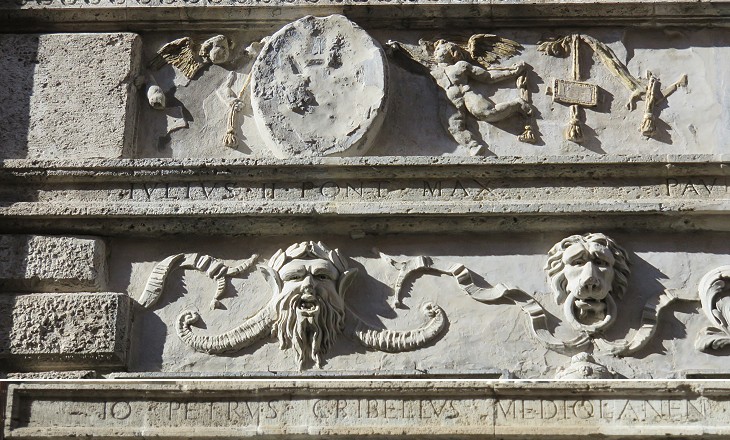 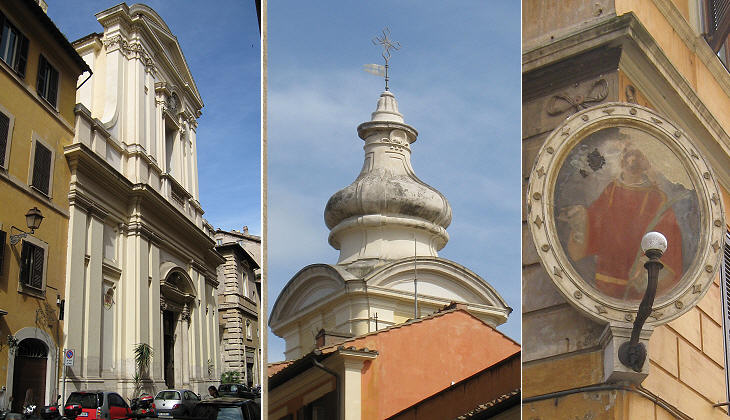 The façade of the church was redesigned by Marco David in 1765 and the interior was the object of many changes in the 1860s, so the church does not retain much of its original aspect and decoration. St. Lucy of Syracuse is patron saint of the blind and those with eye-trouble and S. Lucia al Gonfalone received votive offerings of golden eyes. Benvenuto Cellini, a Florentine goldsmith and sculptor, who lived nearby is known for having offered a golden eye which he personally chiselled.
The tiny church of S. Stefano in Piscinula which was located opposite S. Lucia was pulled down in ca 1870. A sacred image of St. Stephen marks the modern building which replaced the church. After S. Lucia del Gonfalone Via dei Banchi Vecchi becomes Via di Monserrato. 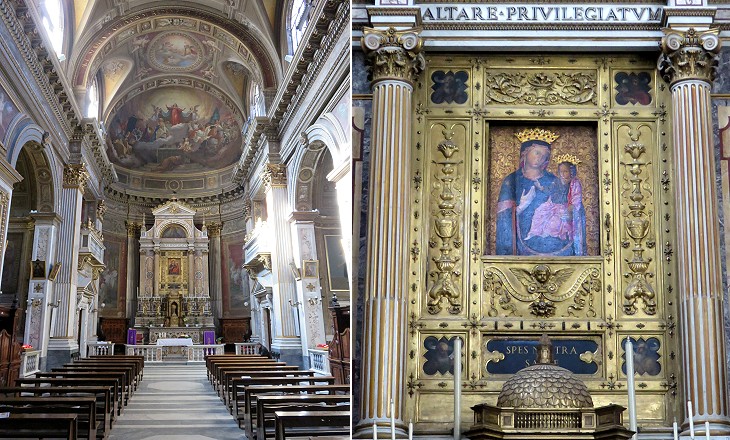 (left) Interior; (right) main altar with a sacred image by Livio Agresti who worked at the decoration of nearby Oratorio del Gonfalone 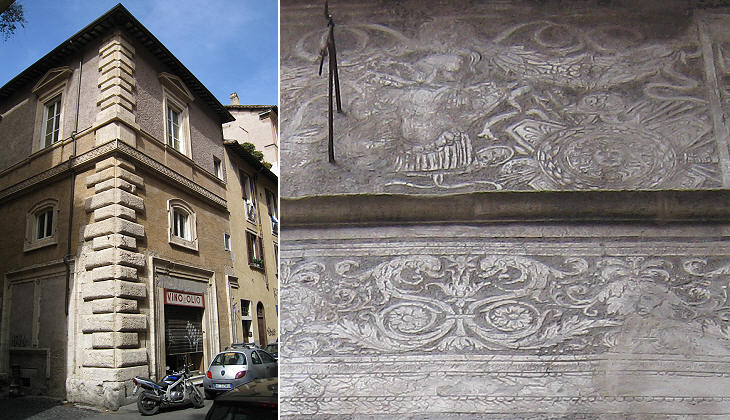 A narrow street separates S. Lucia del Gonfalone from a Renaissance unfinished palace designed by Antonio da Sangallo the Younger for Pietro Fieschi, Bishop of Cervia. It is not the only Renaissance building near the church: in the nearby alley named after Benvenuto Cellini, a house retains its graffito decoration: the narrowness of the alley preserved the painting from being damaged by rain. See other nearby painted houses at Via del Pellegrino.