Links to this page can be found in Book 4, Map C2, Day 7, View D6, Rione Parione and Rione Regola. 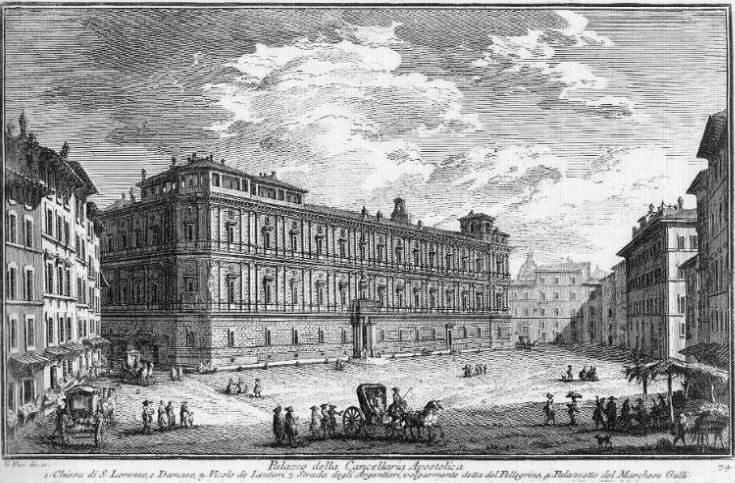 In 1754, when Giuseppe Vasi published this etching, new palaces were built in Late Baroque style, yet Palazzo della Cancelleria was not regarded as being old-fashioned, but rather a masterpiece which still deserved admiration for having marked a breakthrough in civil architecture. Vasi attributed it to Donato Bramante, the architect who introduced the Renaissance style to Rome, but art historians discard this opinion because Bramante came to Rome in 1499, when the design of Palazzo della Cancelleria was already established.
The view is taken from the green dot in the small 1748 map here below. In the description below the plate Vasi made reference to: 1) SS. Lorenzo e Damaso (S. Lorenzo in Damaso); 2) Vicolo de Leutari (lute makers) leading to Piazza di Pasquino; 3) Strada degli Argentieri (silversmiths), usually called Via del Pellegrino (pilgrim); 4) Palazzetto del Marchese Galli. The small map shows also: 5) Palazzo della Cancelleria; 6) Oratorio delle Cinque Piaghe; 7) Tabernacolo di S. Margherita; 8) Arco degli Acetari; 9) Painted houses in Via del Pellegrino; 10) Palazzo Montoro. The dotted line in the small map delineates the border between Rione Regola (left) and Rione Parione (right). 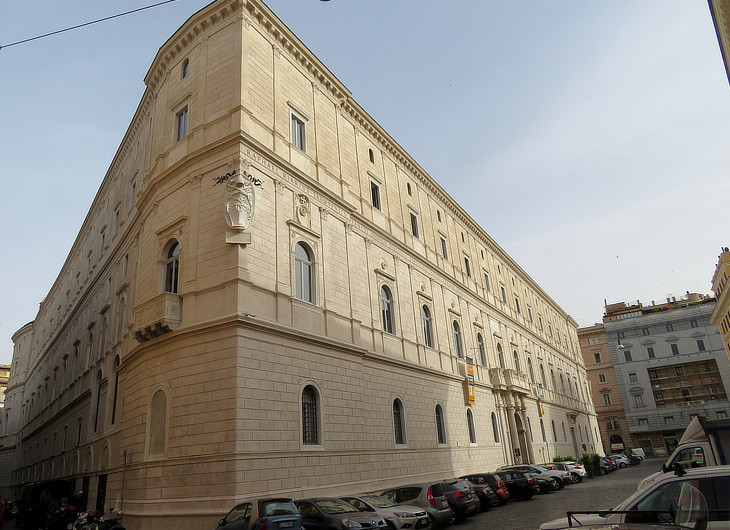 The buildings at the end of the square, including Palazzetto Galli, were demolished in the 1880s to open Corso Vittorio Emanuele; Jacopo Galli was an advisor to Cardinal Raffaele Riario, the founder of Palazzo della Cancelleria.
Palazzo della Cancelleria shows some very minor changes; coats of arms of Pope Sixtus IV and Pope Julius II, respectively uncle and cousin of Cardinal Riario were placed at the corners of the building in the 1940s; during the annexation of Rome by the French Empire, the palace housed the imperial tribunals and a large inscription with the words Corte Imperiale was placed above the central balcony. 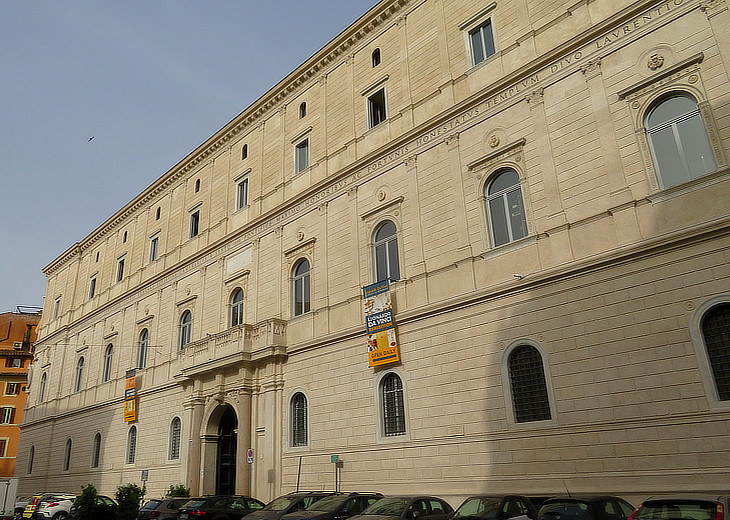 Raffaele Riario was appointed cardinal in 1477 at the age of seventeen and a few years later he became titular cardinal of S. Lorenzo in Damaso; he went to live in the cardinal's residence near the church, but he soon decided to rebuild the church and the palace. According to tradition he financed their construction with his dice winnings and he won an enormous amount of money from Franceschetto Cybo, son of Pope Innocent VIII.

(left) Detail of the corner with Via del Pellegrino with the initial part of the 1495 inscription celebrating the foundation of the palace; (right) coat of arms of Cardinal Raffaele Riario, a detail of which is shown in the image used as background for this page

By 1495 the eastern side of the palace from Via del Pellegrino to the entrance was completed.
It is said that the travertine coating of the façade was made with blocks fallen from Colosseo; the design of Palazzo della Cancelleria influenced that of Palazzo Giraud which was built a few years later.

The decoration of Palazzo della Cancelleria is mainly based on reliefs depicting rosa canina, a spontaneous species of rose with five petals which was the heraldic symbol of the Riario. The rose was also one of the heraldic symbols of the Orsini and it can be seen in many of their former fiefdoms (e.g. Bracciano and Bomarzo). The quality of the reliefs is very high; if not personally executed by Andrea Bregno, they are the work of one of his best assistants. The completion of Palazzo della Cancelleria was delayed because Cardinal Riario preferred to leave Rome during the final years of the pontificate of Pope Alexander VI. 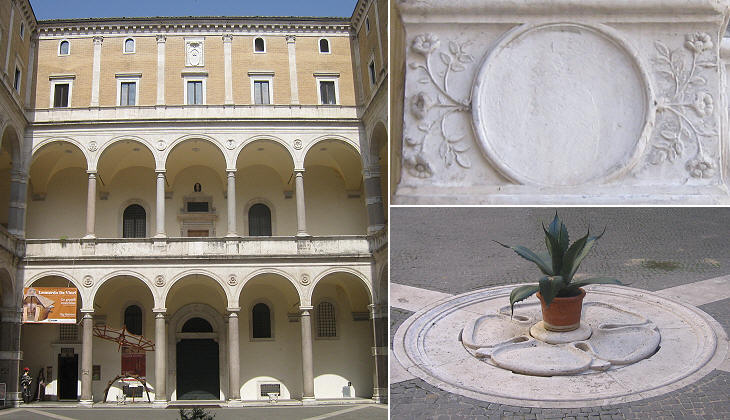 (left) Courtyard which perhaps was designed by Bramante as it was built after Cardinal Riario returned to Rome; the columns were most likely found at nearby Teatro di Pompeo; (right) details of its decoration which are based on the heraldic symbol of the Cardinal; you may wish to see other images of it in the historical section or the cloister Bramante designed at S. Maria della Pace

In 1517 Cardinal Riario was charged with being involved in a plot to kill Pope Leo X and he was imprisoned in Castel Sant'Angelo; he was eventually acquitted, but he had to relinquish his palace; he went to live to Naples where he died in 1521.
You may wish to see him wearing a blue robe behind his uncle in a detail of a painting by Melozzo da Forlì (it opens in another window).
He built also a villa outside Porta Settimiana which was eventually bought and enlarged by the Corsini.

This Pallace was built of the Stones of the Coliseo by Cardinal Riario. The chief thing I saw in it was the Gallery of Pictures, of Cardinal (Francesco) Barberini who being Vice-Chancellor, liveth always in this Pallace to exercise his Charge the better.
Richard Lassels' The Voyage of Italy, or a Compleat Journey through Italy in ca 1668
While a section of the palace continued to be used as residence of the titular cardinals of S. Lorenzo in Damaso, its major part housed Cancelleria Apostolica, the body in charge of issuing papal bulls which was previously in Palazzo Sforza Cesarini. Because of its use for administrative purposes it was neglected by most foreign travellers, notwithstanding its importance from an architectural viewpoint.
The palace is an extraterritorial property of the Holy See. A relief portraying Emperor Vespasian which was found in 1939 during maintenance works was moved to Musei Vaticani.

(left) Entrance (you may wish to see it in a 1588 Guide to Rome); (centre-1) bronze relief on the door portraying St. Lawrence carrying the symbol of his martyrdom; (centre-2) coat of arms with the symbol of S. Lorenzo in Damaso on a house near Piazza Farnese; (right) coats of arms of Cardinal Riario inside the church

The name of the church suggests that Damaso is a location, while it is the name of Pope Damasus I (366-384), the founder of the church. S. Lorenzo in Damaso was entirely rebuilt by Cardinal Riario inside the northern wing of the palace; a small portal designed by il Vignola in the second half of the XVIth century is its only external evidence. Unlike other churches of Rome (S. Lorenzo in Fonte, S. Lorenzo in Panisperna and S. Lorenzo fuori le mura) it is not associated with events of the life of St. Lawrence. 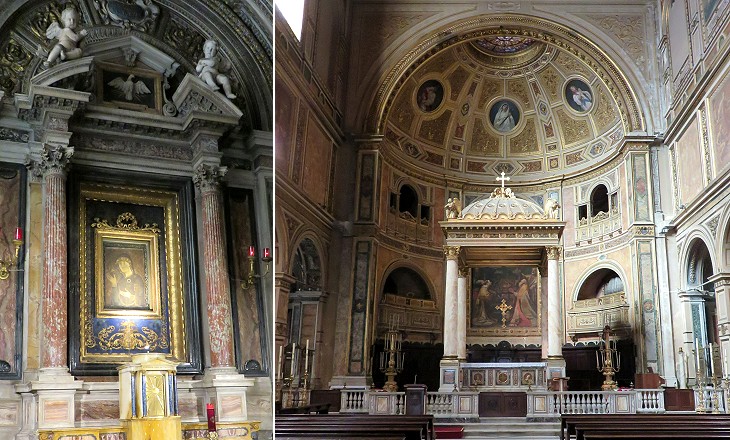 The titular cardinals of S. Lorenzo in Damaso took care of its decoration, but the church suffered a lot from being used as a stable by French troops in 1799 and perhaps even more by a radical restoration (1868-1882) by Virginio Vespignani, the favourite architect of Pope Pius IX. Only some of the side chapels were not touched by it. The gravestones on the floor were moved to the side walls of the building. 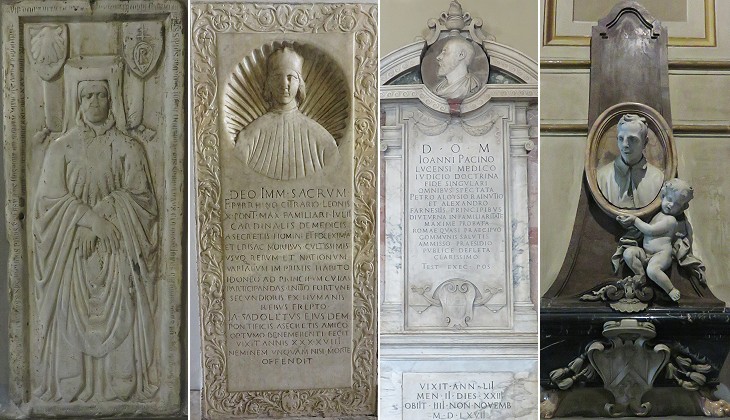 (left to right) 1) XVth century gravestone of a noble woman; 2) gravestone of Pyrrhino Citrario, a member of the Papal court in the early XVIth century; 3) monument to Giovanni Pacini, physician of Cardinal Alessandro Farnese by Giovanni Antonio Dosio (1567); 4) monument to George Conn by Lorenzo Ottoni (portrait) and Giovanni Giorgetti (angel) (1678); Conn was a Scottish theologian from Aberdeen, sent by Pope Urban VIII to London to advise Queen Mary Henrietta, the Catholic wife of King Charles I (you may wish to see more monuments portraying the dead in a medallion)

The selection of gravestones and small funerary monuments shown above is a quick summary of how this type of work of art evolved during the centuries. In addition the church contains an interesting monument to Alessandro Valtrini by Gian Lorenzo Bernini which is placed very near the entrance and is not very welcoming. 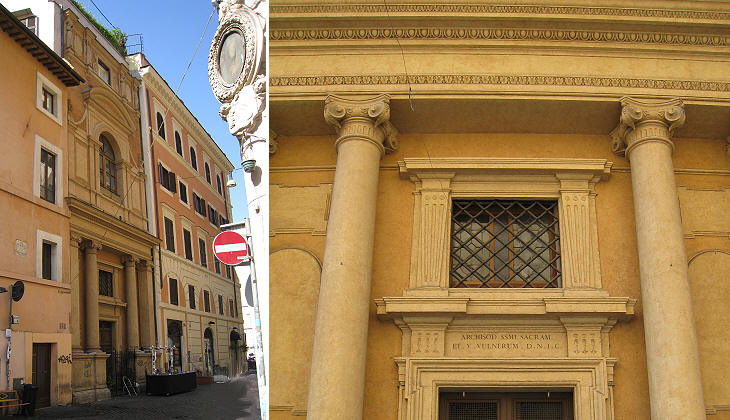 Many of the streets near Palazzo della Cancelleria are named after trades; Vasi mentioned in his plate lute makers and silversmiths; Via dei Baullari was the street of the trunk makers. In this street a brotherhood which used to meet in S. Lorenzo in Damaso built a small oratory the façade of which was modified in the XIXth century; the inscription above the entrance says: ARCHISOD. SSMI. SACRAM. ET V VULNERUM D. N. I. C. Archbrotherhood of the Holy Sacrament and of the Five Wounds of Our Lord Jesus Christ (five piercing wounds Jesus suffered during the Crucifixion). 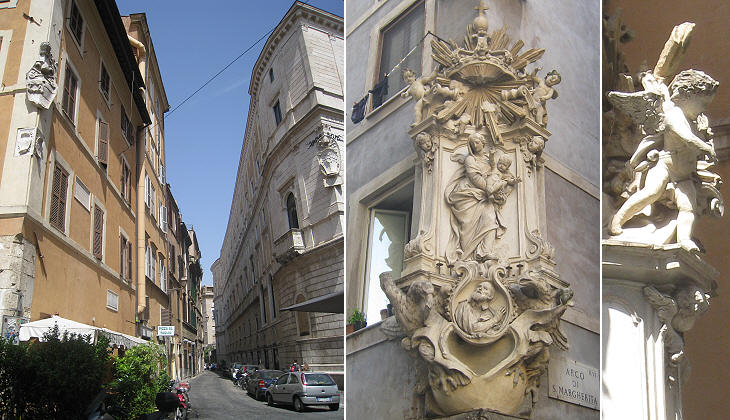 Via del Pellegrino was enlarged in 1497 by Pope Alexander VI in the frame of various initiatives meant to develop Campo dei Fiori; although it was used by pilgrims (It. pellegrini) on their way to Ponte S. Angelo, the name of the street probably derives from that of an inn.
Via del Pellegrino retains its Renaissance appearance except for an XVIIIth century elaborate tabernacle built by Cardinal Pietro Ottoboni who lived in Palazzo della Cancelleria; he was a nephew of Pope Alexander VIII and the last cardinale nepote, i.e. the nephew of the pope who acted as a sort of Prime Minister; this practice was discontinued by Pope Innocent XII; the double-headed eagles are a heraldic symbol of the Ottoboni. St. Philip Neri was portrayed in the small medallion. Via del Pellegrino ends very near Oratorio dei Filippini. 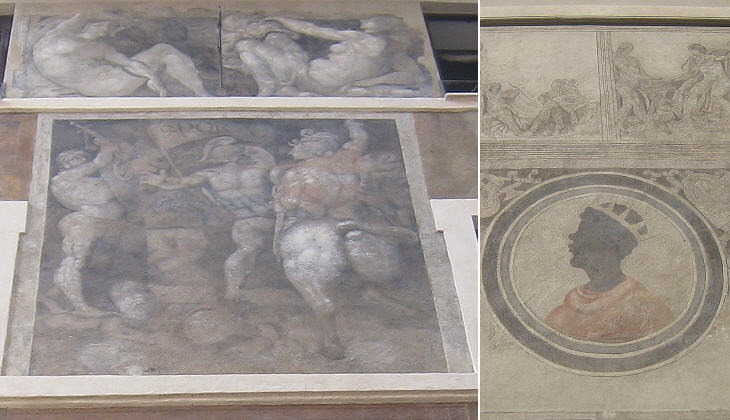 Renaissance graffito paintings in Via del Pellegrino 64-67: (left) scenes of Roman history attributed to Daniele da Volterra, they recall those at Palazzo Istoriato and Palazzo Ricci; (right) a king, perhaps one of the Magi, probably "advertising" an inn (there are lots of "Taverna del Moro" throughout Italy)

The painted façades of two Renaissance houses in Via del Pellegrino were made more visible by a recent restoration. They are situated near the end of the street where also Casa di Pietro Paolo della Zecca shows evidence of having been painted. 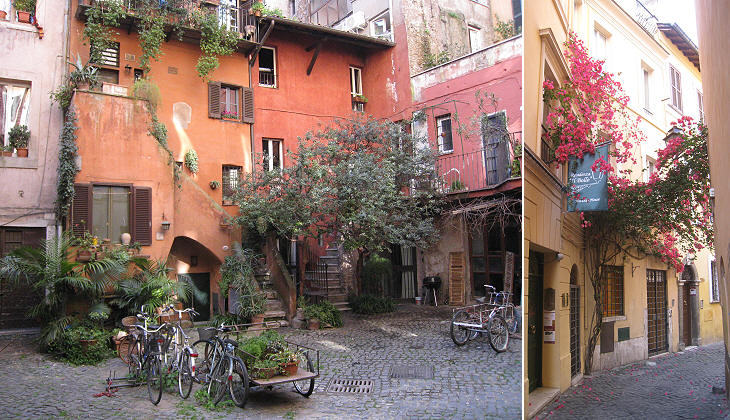 An arch in Via del Pellegrino gives access to a courtyard surrounded by buildings, which, although in part modernized, retain the structure of ordinary medieval houses. The name of the site refers to acetari, sellers of mineral water (acqua acetosa).
In 1680 silversmiths were asked to relocate to Via del Pellegrino; the fineness of the gold and silver objects they sold was certified by an office in Vicolo del Bollo, a narrow side street. 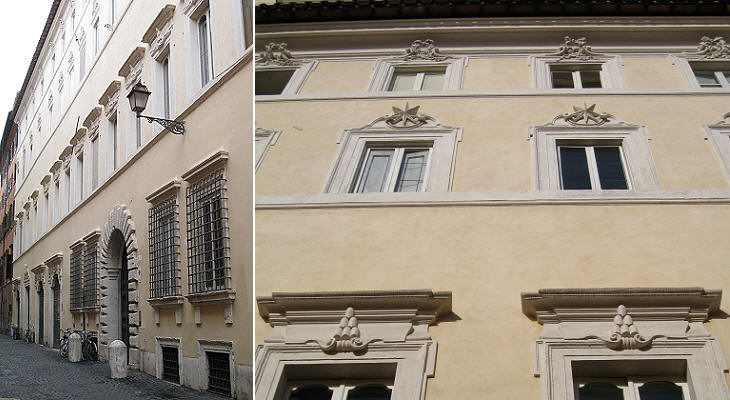 Vicolo del Bollo leads to another narrow street which ends at S. Maria in Monserrato. It would seem the least suitable location for building a large palace, but perhaps its owners hoped to pull down the opposite houses. The Montoro were named after their fiefdom near Narni; they lived in this neighbourhood from the XVIth century; their palace has an XVIIIth century stucco decoration which includes heraldic symbols of the Chigi, because the last of the Montoro married Francesco Chigi, a distant relative of Pope Alexander VII. 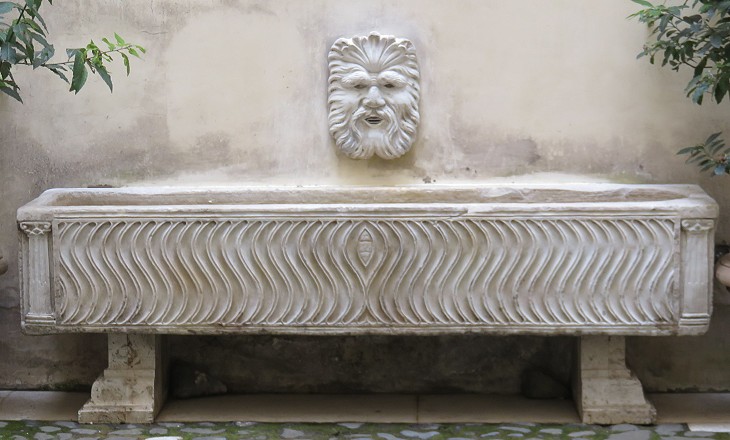