Rione Regola was named after "regola" a word derived from "arenula" (sand) with reference to a beach located near Ponte Sisto. It borders to the west on Ponte, to the north on Parione and Sant'Eustachio, to the east on Sant'Angelo and to the south on the Tiber. 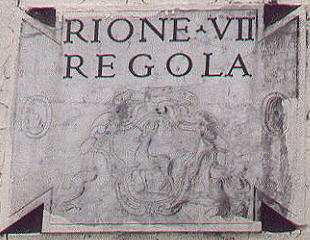 Coat of arms of Rione Regola

The symbol of Rione Regola is a rampant golden hind. According to a legend, after a flood, a golden head of a hind was found on the beach of Regola.
Rione Regola is mainly a Renaissance quarter with very few signs of Ancient Rome. However the long street which crosses the whole rione from NW to SE follows an ancient Roman street and the straight street leading to Ponte Sisto does the same. It became a very densely populated area during the Middle Ages due to its proximity to the river which at the time was the only source of water. Most of the streets are still named after the artisans who had their workshops there. Regola was a sort of industrial district of Rome: Via dei Cappellari (hatters), Chiodaroli (nail-makers), Pettinari (comb-makers), Baullari (case-makers), Giubbonari (dress-makers), Vaccinari (fur-makers), Calderari (coppersmiths), indicate just some of the activities which were performed in Regola.
The rebuilding by Pope Sixtus IV in 1475 of Pons Aurelius, called after him Ponte Sisto, and a few years later the opening by Pope Julius II, nephew of Sixtus IV, of a straight street linking Ponte Sisto with Ponte S. Angelo, changed in part the nature of Regola. Via Giulia, named after the Pope, became the most important street of Renaissance Rome and Pope Paul III Farnese built across the street his palace and his garden. Regola did not have large churches, the majority of them being churches belonging to a guild.

In addition to the monuments shown in the pages listed below, Regola has many other memories of the Renaissance and of the Baroque and Late Baroque periods as the images above show. 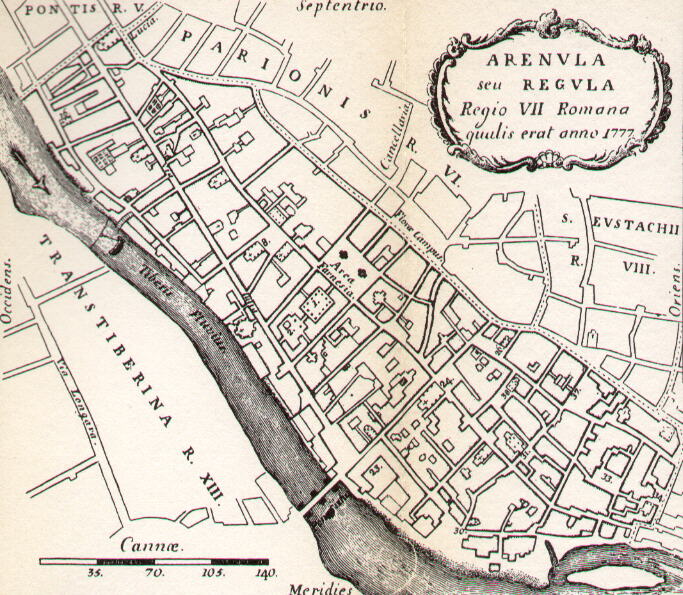 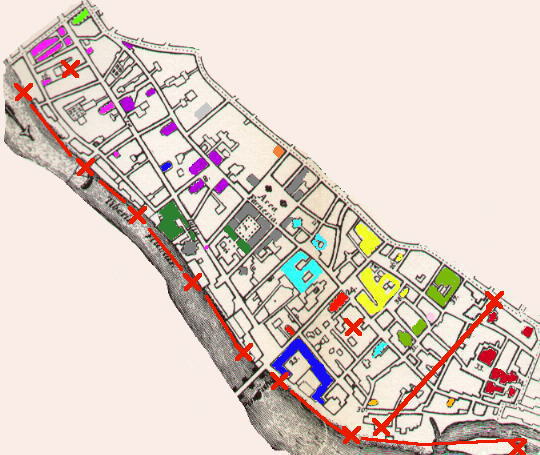 The red X mark the main changes which occurred after 1777:
a) line linking several X along the river: in the 1880s huge walls were erected along the Tiber: this effort included a redesign of the river front which required the pulling down of some minor churches and the shortening of Collegio Ecclesiastico a Ponte Sisto;
b) line linking two X: the opening of a large road (Via Arenula) cut Regola into two parts, thus isolating the part of Regola next to Rione Sant'Angelo;
c) top of the map: a partially aborted attempt to open a modern road across Via Giulia interrupted the series of Renaissance buildings along the street;
d) X next to the church painted in red: most of Ospizio dei Pellegrini was pulled down and replaced by modern buildings.
The different colours group the monuments which are shown in the same page.

The image used as background for the table shows a detail of Palazzo Sacchetti.
You can start your tour of Rione Regola from S. Lucia del Gonfalone.