Links to this page can be found in Book 5, Day 7, View D8 and Rione Regola. 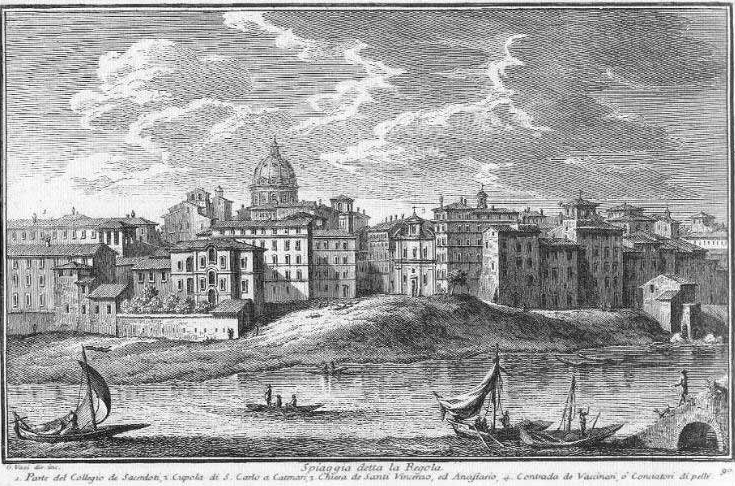 Floods and lack of maintenance caused the banks of the River Tiber to have an irregular height; in the XVIIIth century a mound of sand on the left bank of the river had risen much higher than the level of the streets behind it, as this 1754 etching by Giuseppe Vasi shows.
Because the river bank had a rather forlorn aspect Vasi showed in the foreground a number of boats including one under full sail (it is shown in the image used as background for this page). Rome had two river harbours: Porto di Ripetta which was situated upstream of the site shown in this plate and Porto di Ripa Grande downstream of it and maybe the boat was carrying goods to the latter.
The view is taken from the green dot in the small 1748 map here below. In the description below the plate Vasi made reference to: 1) Part of Collegio Ecclesiastico; 2) Dome of S. Carlo ai Catinari; 3) SS. Vincenzo e Anastasio; 4) Contrada (street) de' Vaccinari (tanners). 1) and 2) are shown in detail in other pages. The small map shows also 5) S. Bartolomeo dei Vaccinari. 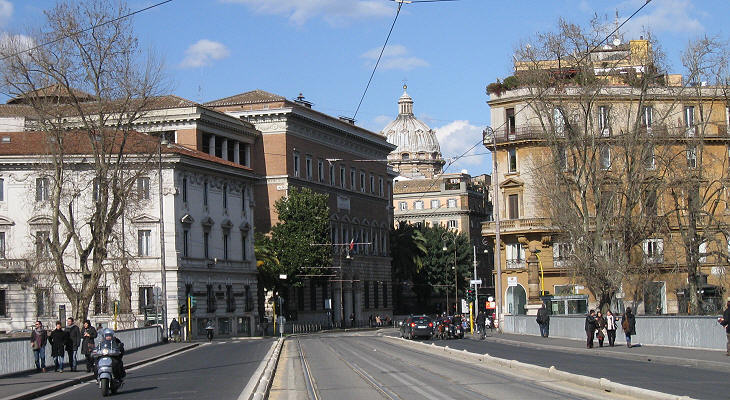 The view in February 2009 from Ponte Giuseppe Garibaldi. It shows the initial section of Via Arenula which leads to Teatro Argentina

Only the dome of S. Carlo ai Catinari in the background tells us that we are looking at the same site shown in the etching. The view by Vasi is a rare document of an entirely lost part of Rome which did not attract the attention of other painters and printmakers. 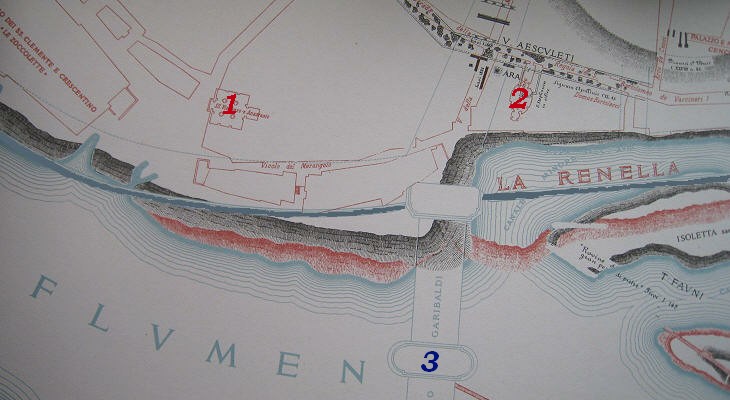 Map from "Forma Urbis Romae" by Rodolfo Lanciani (1893); the map shows in black the neighbourhood at the time of ancient Rome, in red as it was before 1870 and in blue the changes introduced after that year. In particular the thick blue line indicates the high wall built to prevent floods in the late 1880s. 1) SS. Vincenzo e Anastasio; 2) S. Bartolomeo dei Vaccinari; 3) Ponte Giuseppe Garibaldi

In 1885-1886 the whole area shown in the etching was redesigned and almost all the buildings near the river bank were demolished, similar to what occurred in the adjoining Jewish Ghetto. The small church of SS. Vincenzo e Anastasio belonged to the guild of the cooks; it was very old, but it had been rebuilt in 1640. It was a parish church until 1824. The last records about the church indicate that it was void of interest:
This small church is situate on a piazza of the same name, on the left bank of the Tiber, between the Cenci and Spada palaces and had been a parish-church; but is now in the hands of the Guild of cooks, who obtained possession of it in 1513. The Annunciation, on its great altar, is by an unknown hand.
Rev. Jeremiah Donovan - Rome, ancient and modern: and its environs - 1844 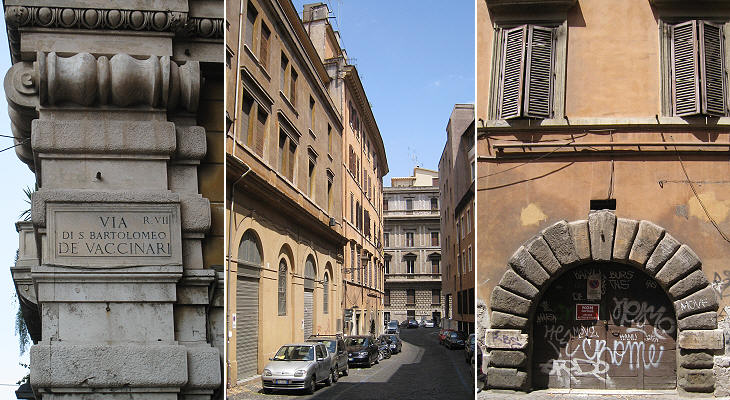 (left/centre) Street bearing the name of the lost church of S. Bartolomeo dei Vaccinari; (right) portal of an old building which shows the new level of the street

The workshops of the tanners were located near the river bank; in 1570 the guild of the tanners was assigned an old church (S. Stefano de Arenula); the new owners dedicated it to St. Bartholomew, their patron saint; later on the church was entirely rebuilt (see a directory of Roman churches belonging to a guild).
Over the altar of the little tribune is the flaying of S. Bartolomew, who is represented, in the lateral painting to the left as refusing to worship idols; and in that to the right as suffering martyrdom by decapitation. Donovan
The level of the ground was significantly raised in the 1880s and the church was pulled down; its main altar was shipped to Assab in Eritrea, then an Italian possession, to decorate a new church, but the 1929 detailed guide to Eritrea by Touring Club Italiano does not mention it. 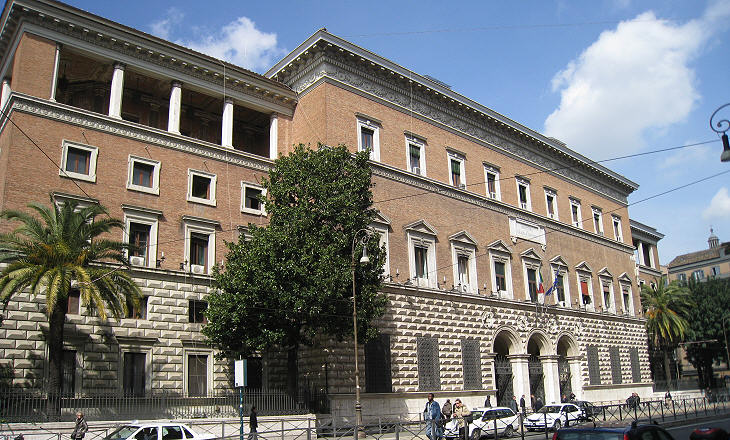 Many old houses were pulled down in 1914 to make room for a large building by Pio Piacentini which was completed in 1929. Piacentini designed a Late Renaissance palace which is very different from Palazzo delle Esposizioni, one of his previous works; the comparison between the two buildings shows Piacentini's move towards a more restrained design.
Marcello Piacentini, son of Pio, played a major role in the design of E.U.R., a modern quarter of Rome with some innovative buildings.