Cardinal Fabio Chigi chose the name of Alexander VII in memory of Pope Alexander III who had fought Emperor Frederick I to preserve the independence of the Church. Alexander had become a most unsuitable name after Pope Alexander VI Borgia. Nevertheless when in Piazza S. Pietro one sees the name of Alexander VII repeated so many times and the six (remaining) coats of arms, the idea that Alexander the Great was the reference for Fabio Chigi when he named himself Alexander, comes to mind.
Alexander VII was a man very interested in the arts and he personally reviewed with Bernini the possible solutions for the completion of Piazza S. Pietro.
His coat of arms is everywhere in Rome, not only on buildings he erected, but also on many he just slightly restored. Alexander VII feared that his formal coat of arms might not survive the many hazards of history and he had artists develop decorations with its components in the belief that art would always be respected.
This page is dedicated to this aspect. Of the two elements of his coat of arms he thought the six mountains with the star would better represent him, as the oak was already associated with Popes Sixtus IV and Julius II Della Rovere.

City side of Porta del Popolo

Queen Christina of Sweden embraced the Catholic faith and this event led to the belief that other Protestant kings or queens might follow her example. For her arrival in Rome in 1655 Alexander VII had Bernini to decorate the city side of Porta del Popolo. "Felici Faustoque Evento" (to the happy and propitious event) one can read in memory of her entrance, but besides Queen Christina the six mountains and the star celebrate the Pope. 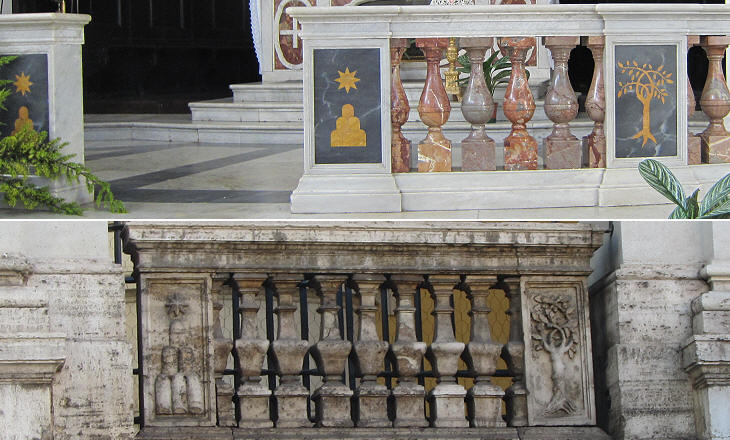 Balustrades at S. Maria dell'Assunzione in Ariccia (above) and S. Caterina a Magnanapoli (below)

Examples where both themes of the coat of arms are used can be found in decoration of balustrades in churches. S. Maria dell'Assunzione in Ariccia, a little town near Albano where the Chigi had a large palace (and almost everything was theirs), is one of Bernini's greatest accomplishments. 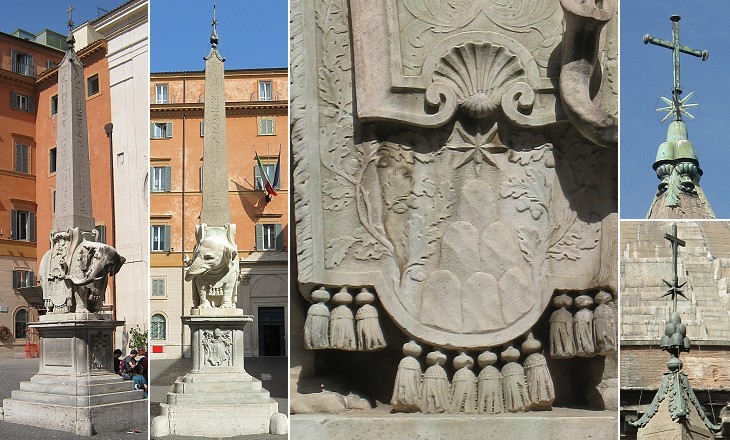 Obelisk at Piazza della Minerva; (right-above) tip of the obelisk in Piazza del Popolo with the heraldic symbols of Pope Sixtus V

There are more Egyptian obelisks in Rome than in the rest of the world! Most of them are topped by mountains and a star, but usually the mountains are three in memory of other popes (mainly Pope Sixtus V, but also Pope Clement XI and Pope Pius VII).
Only the elephant in Piazza S. Maria sopra Minerva bears an obelisk tipped by the six mountains of Alexander VII. It was designed by Bernini (the elephant is a work by Ercole Ferrata). The little monument still retains the formal coat of arms of Alexander VII. But to secure the memory of the Pope Bernini decorated the caparison of the elephant with both the oak and the six mountains. 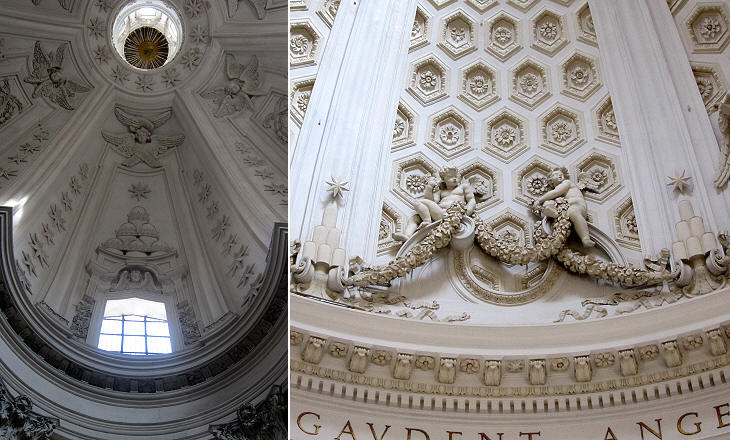 Another way to preserve the Pope's memory was to decorate with the six mountains the interior of church domes. Here are the interiors of S. Ivo alla Sapienza by Borromini and of S. Maria dell'Assunzione by Bernini. 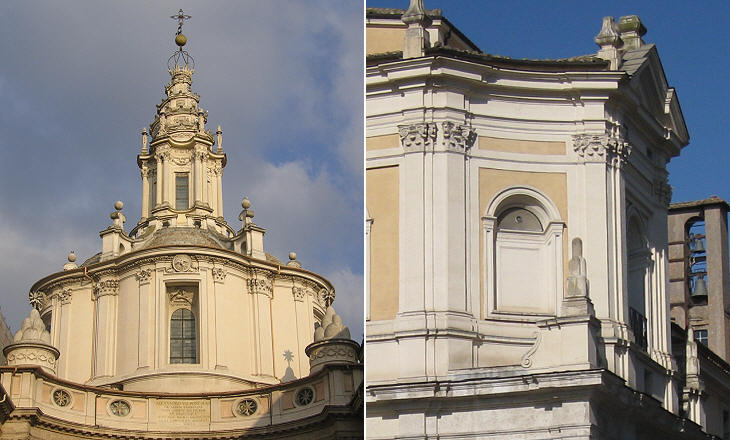 The use of the six mountains as a decoration of the façade was another way to preserve the memory of the Pope. Although S. Ivo was built under his predecessors and its shape took after the bee of Pope Urban VIII, the mountains were added with an unhappy result.

The six mountains and the star of Alexander VII can also be found on very minor works like a small pier near the fountain of Acqua Paola or in one of the columns on the left side of the Pantheon or in a chandelier in S. Pietro. Alexander VII decided to move the bronze doors of the Roman Curia to S. Giovanni in Laterano. As the doors of the Basilica were larger than those of the Curia, Borromini included them in a new bronze frame decorated with stars and acorns (a reference to the oak). 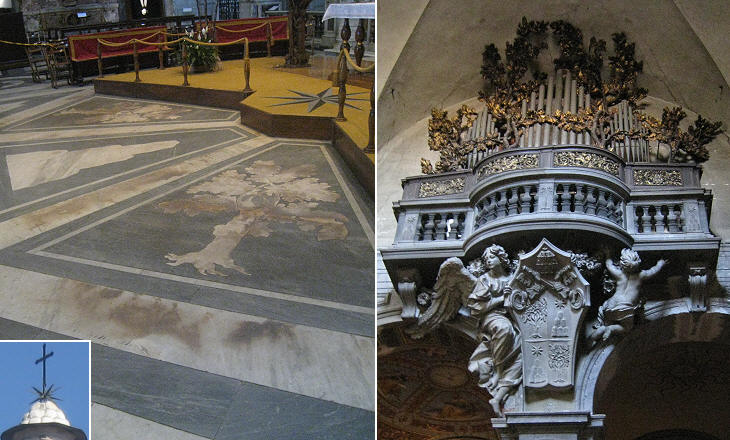 This church was built by Pope Sixtus IV and retains several coats of arms with the Pope's oak tree. The interior was almost entirely renovated by Bernini who added many coats of arms of Alexander VII.
Those of the organs are of a special interest: not only did Bernini strictly associate the coat of arms with the angels bearing them, but he also inserted in the organ the oak tree of the Chigi. The floor under the altar is decorated alternately with the mountains and the oak tree. The dome of Cappella Chigi is topped by the mountains and the star. 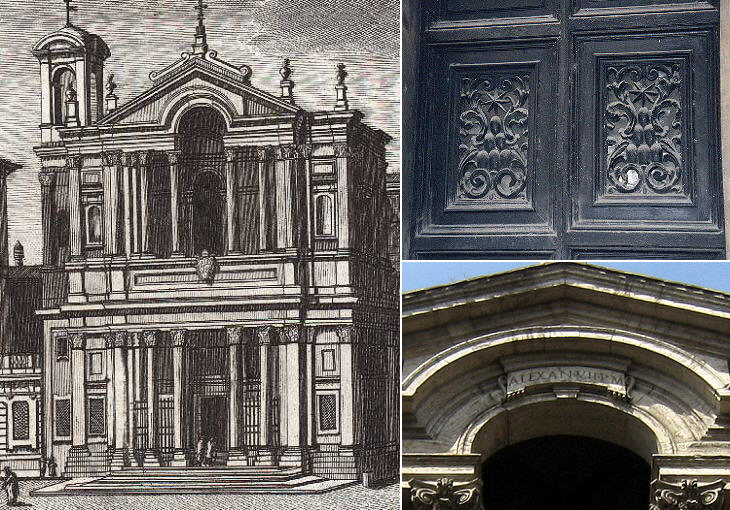 S. Maria in Via Lata: (left) in the plate by Giuseppe Vasi; (right) details of the façade today

Santa Maria in Via Lata is a very old church: the façade was redesigned by Pietro da Cortona. The church is situated close to the Pamphilj palace and the renovation started under Pope Innocent X Pamphilj but the Pope died and his successor Alexander VII received the credit. His coat of arms however went lost. The memory of Alexander VII is nevertheless, although with less appearance, assured by the mountains and the star on the main door (and by his name on the top of the loggia). 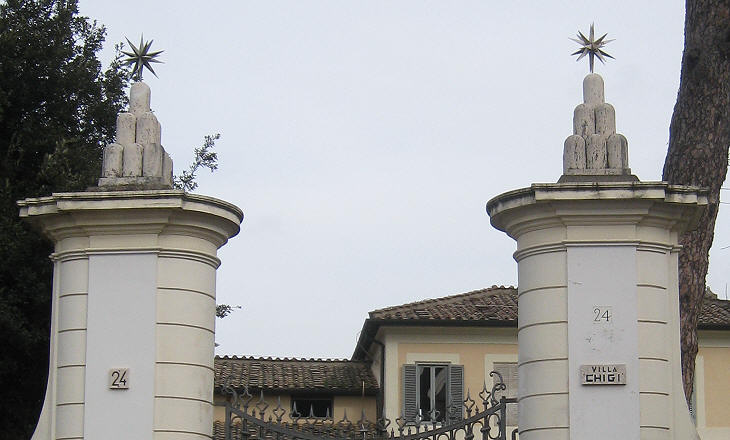 Gate of Villa Chigi near Via Nomentana

Palazzo Chigi is in the centre of Rome in Piazza Colonna: you can see in the background the decoration of the little balcony. See also the six mountains and the star in Fontana dell'Acqua Acetosa and in S. Giovanni in Oleo.

So, when in Rome watch out for the mountains: count them: six, then it's Alexander VII; three, you are in trouble!