S. Giacomo in Scossacavalli
(Vasi at work in the Grand View of Rome) 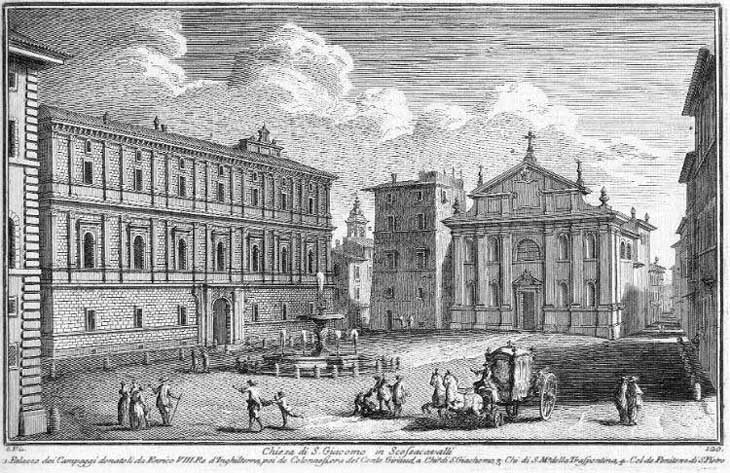 This 1756 etching by Giuseppe Vasi shows Piazza Scossacavalli which until 1937 was the most important square of Rione Borgo, except for Piazza S. Pietro. It was located between Borgo Vecchio, a street linking Ponte S. Angelo with S. Pietro and Via Alessandrina aka Borgo Nuovo, a street parallel to Borgo Vecchio which was opened in 1499 by Pope Alexander VI; the Pope granted benefits to those who built imposing palaces along the new street and this led to the construction of Palazzo Giraud and Palazzo dei Convertendi.
The origin of the name Scossacavalli (stopped/shaken horses) is uncertain: some believe it is due to the fact that pilgrims on horses dismounted there before going to S. Pietro.
The view is taken from the green dot in the small 1748 map here below. In the description below the plate Vasi made reference to: 1) Palazzo Giraud; 2) S. Giacomo; 3) S. Maria della Traspontina; 4) Collegio de' Penitenzieri. 3) is shown in detail in another page. The map shows also: 5) Palazzo dei Convertendi; 6) Palazzo Cesi; 7) Casa di Febo Brigotti; 8) Casa di Jacopo da Brescia. The view in February 2009 (on the left Palazzo Giraud and on the far right S. Maria in Traspontina)

Via della Conciliazione, a large avenue, was completed in 1950 to provide a grand approach to Piazza S. Pietro and also to celebrate the reconciliation between the Holy See and Italy after the 1870 events. All the buildings between Borgo Vecchio and Borgo Nuovo (including the church of S. Giacomo) were pulled down in 1937. The architectonic elements of some houses and palaces were carefully removed and their façades were reassembled in modern buildings at the sides of the new street. Altar from S. Giacomo in Scossacavalli now at SS. Michele e Magno; the inscription says it is the altar of the Circumcision of Jesus

It stands a little Piazza, with a fine Fountain, and joyning to it a little Church called San Jacomo Scozza Cavalli, in which, under an Altar on the right hand, I saw the Stone upon which Abraham offered to sacrifice his Son Isaac, and under another Altar on the left hand, the Stone upon which our Saviour was placed, when he was presented in the Temple. Both these were brought, or sent to Rome, by Helen Mother of the Emperor Constantine the great.
Richard Lassels' The Voyage of Italy, or a Compleat Journey through Italy in ca 1668
S. Giacomo in Scossacavalli was not deemed worth the effort of rebuilding it; its movable works of art were given to the Vatican, its relics to SS. Michele e Magno and the frescoes were detached and moved to Museo di Roma a Palazzo Braschi. 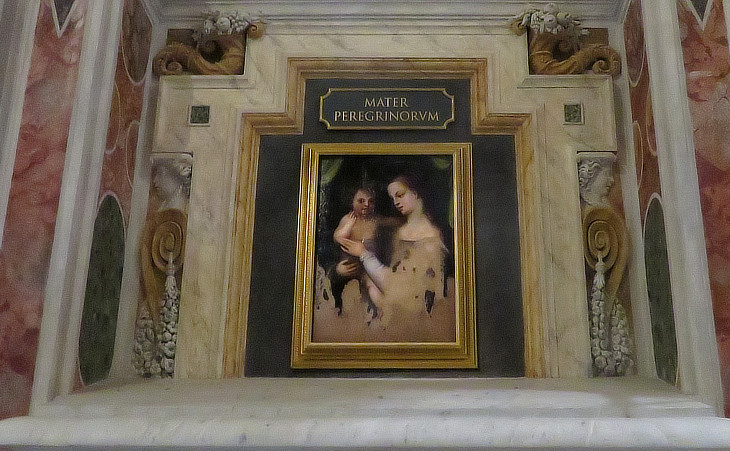 The church was designed in the XVIth century on the site of a previous small medieval church. You may wish to see it as it was depicted in a 1588 Guide to Rome, a few years before the completion of the façade.
The fountain shown in the plate was built at the time of Pope Paul V and in 1958 it was relocated opposite S. Andrea della Valle. 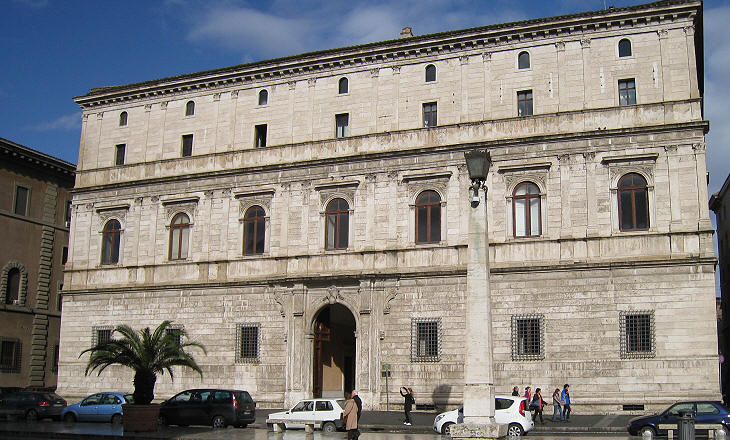 We came to the Pallace of Campeggi , so called, because it belonged to Cardinal Campeggi, the Popes Legat in England, to whom Henry the VIII. gave it. Heretofore it belonged to the English Embassadors, and was one of the best in Rome, both for being near the Popes Pallace, and also for that it was well built by famous Bramante. It belongs now to Cardinal Colonna. Lassels
This Renaissance palace was not affected by the opening of Via della Conciliazione. It was built in the early XVIth century by Cardinal Adriano Castellesi da Corneto, his hometown. Its construction however was slowed down by many dramatic events in the life of Cardinal Castellesi; he was made cardinal in 1503 by Pope Alexander VI; at that time he was Ambassador of England to the Papal State and he enjoyed the trust of King Henry VII, to whom he donated the unfinished palace in 1505. Relations with King Henry VIII, who succeeded his father in 1509, worsened in the following years and the King put pressure on Pope Leo X, who, also because the Cardinal was involved in a plot against him, deprived Castellesi of his title.
In 1519 King Henry VIII donated the palace to Cardinal Lorenzo Campeggi, the last Cardinal Protector of England and a future member of the commission which excommunicated the King in 1535.
For a long period the palace was thought to have been designed by Donato Bramante, but art historians are no longer of this opinion; the unknown architect was influenced by the design of Palazzo della Cancelleria. 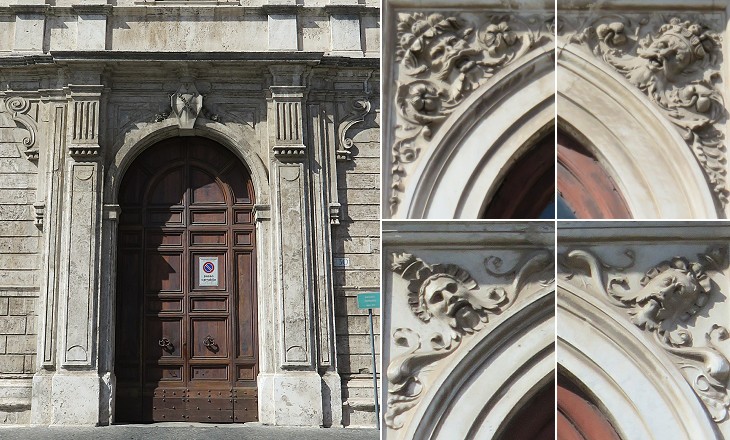 Details of the façade; the image used as background for this page shows one of the windows

After various changes of property in 1720 the palace was bought by Count Pietro Giraud who added the current entrance; in 1820 the building passed to the Torlonia who still own it. A storey of the palace was rented for a long period of time to Joseph Converse Heywood (1834-1900), an American gentleman of highly cultivated literary taste, who wrote several novels ("Sforza", "Herodias", "Antonius" and "Lady Merton, a tale of the Eternal City") which apparently have fallen into oblivion. 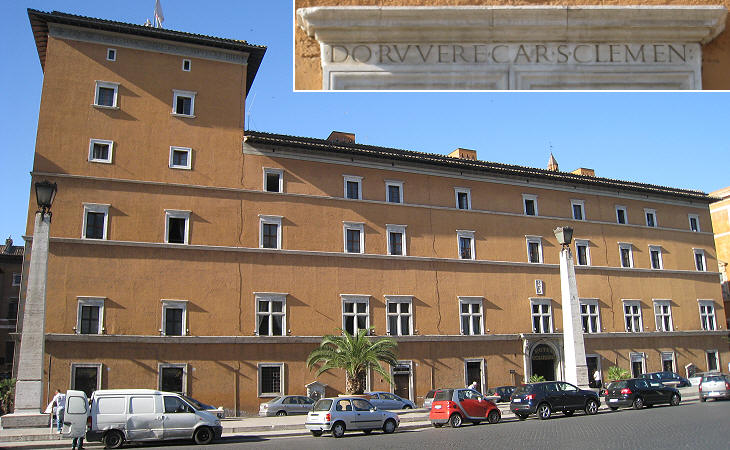 Palazzo dei Penitenzieri; (in the inset) inscription above the windows

Palazzo dei Penitenzieri (or Della Rovere) was located on the southern side of Piazza Scossacavalli along Borgo Vecchio and it was built between 1480 and 1490 before the other two palaces of the square. Its design brings to mind Palazzo Venezia; its founder, Cardinal Domenico Della Rovere, was a distant relative of Pope Sixtus IV (Francesco Della Rovere) who made him cardinal in 1478; he was titular cardinal of S. Clemente so the inscription above the windows says DO(minicus della) RUVERE CAR(dinal of) S. CLEMEN(ti). The inscription was needed to distinguish this building from another Palazzo Della Rovere, that of Cardinal Giuliano, nephew of the Pope. 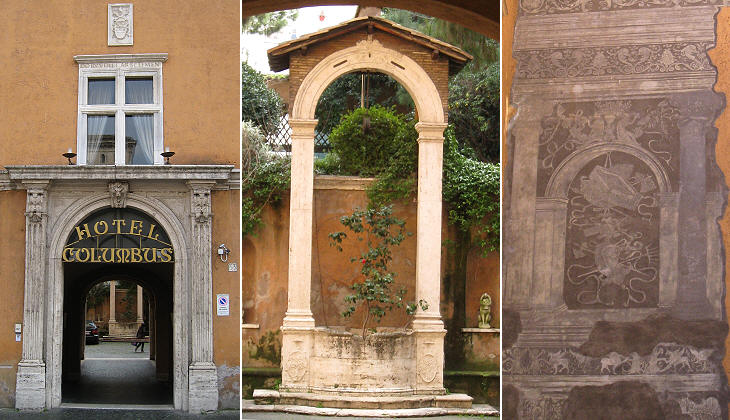 In 1501 Cardinal Della Rovere died; he left his palace to religious institutions: Spedale di S. Spirito, the Chapter of S. Pietro and the monastery of S. Maria del Popolo (he was buried in that church). The palace was rented to cardinals and noblemen until 1655 when it was bought by the Penitenzieri, the priests in charge of confessing the pilgrims at S. Pietro and of imposing the appropriate penance (It. penitenza).
After WWII the building was brought back to its XVth century appearance by an extensive restoration.

Palazzo dei Convertendi acquired this name in 1685 when it was bequeathed by Cardinal Girolamo Gastaldi to an institution in charge of giving assistance to converted heretics; prior to that year the building had belonged to a long series of landlords, including Raphael who lived there from 1517 until his death in 1520. The palace is also known as Palazzo Caprini, the family who built it at the beginning of the XVIth century; it was designed by Donato Bramante and its appearance was similar to that of Palazzo Caffarelli Vidoni; at that time however it was a much smaller building; it was enlarged and its design was greatly modified in the late XVIth century; the façade along Via Alessandrina which had a portal and a balcony designed by Baldassarre Peruzzi was deemed to be of greater value than that in Piazza Scossacavalli and it was reassembled along Via della Conciliazione. 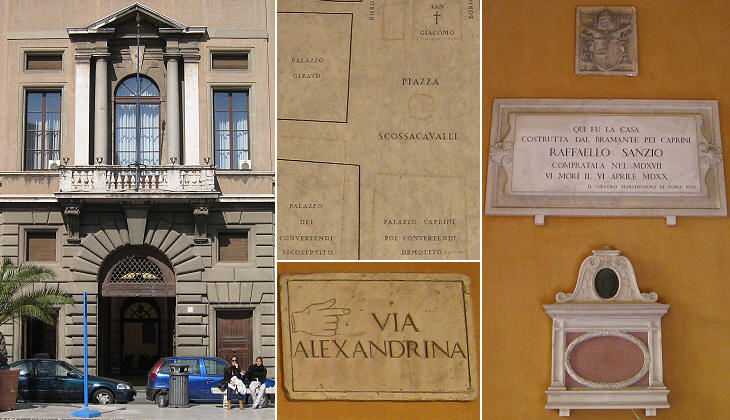 (left) Enlarged view of the portal and of the balcony (and girls waiting to board a Hop-on Hop-off bus); (centre-above) plaque in the courtyard of the building showing its previous (in yellow) and new (in black) locations; (centre-below) plaque which was walled on the northern façade of the palace; (right) coat of arms of Pope Alexander VI and two plaques making reference to Raphael 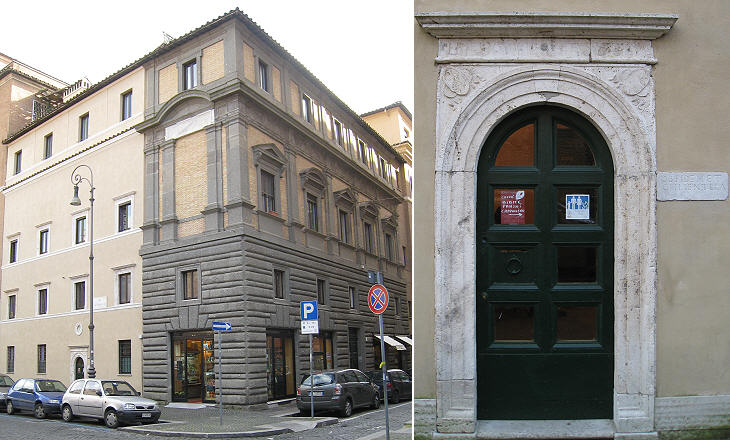 A modern building in a side street was decorated with the façades of two Renaissance houses which were both pulled down to open Via della Conciliazione and which both belonged to physicians of the popes. The house of Febo Brigotti, physician of Pope Paul III, had a rather simple façade with an arched entrance (the small inscription near the door shows the motto of the landlord "OB FIDEM ET CHLIENTELA" (for Faith and Patients). The entrance is very similar to that of the House of Teodoro Amayden in Rione Ponte.
Jacopo da Brescia, physician of Pope Leo X, could definitely rely on a more substantial income: Leo X had rather poor health and this was one of the factors which led to his election. In 1517 Pietro Vercelli, the Pope's physician, accepted a bribe to poison him, but the plot was discovered and Vercelli was quartered (Cardinal Castellesi was charged with being involved in the plot). Jacopo da Brescia replaced Vercelli and he was so well paid that in 1520 he completed an elegant palace, the design of which is attributed to Raphael.
Ferdinando Ponzetti, another physician of the Papal Court earned enough to build a finely decorated family chapel at S. Maria della Pace. 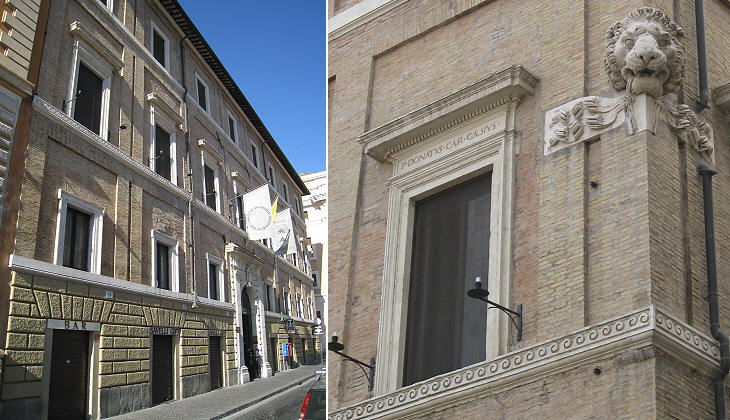 (left) Façade; (right) a window and the lion which was relocated to the new corner of the building

Palazzo Cesi is another palace which was affected by the opening of Via della Conciliazione; it was shortened (each storey had twelve windows) and the entrance was relocated. The palace was built by Francesco Armellini who was made cardinal by Pope Leo X in 1517; towards 1565 it was bought by Cardinal Pier Donato Cesi and his brother Angelo who was Bishop of Todi; they commissioned Martino Longhi the Elder to redesign and enlarge the building. They also contributed to the construction of S. Maria in Vallicella. The Cesi had a palace in Ponte a family chapel at S. Maria della Pace and many possessions in Umbria. 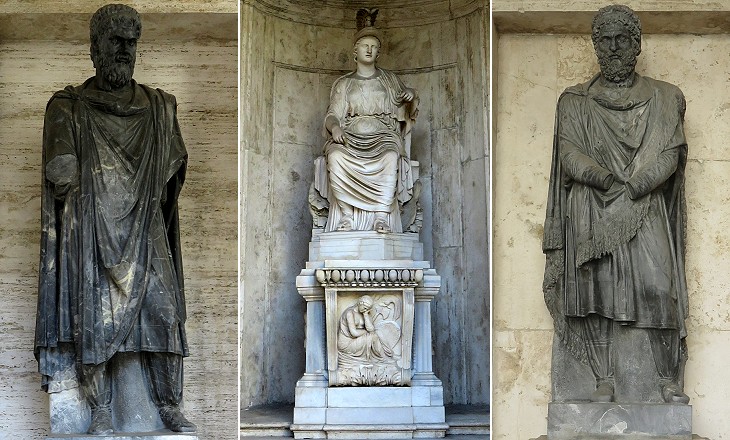 The Cesi already owned another palace in Borgo with an extensive garden: it was in part demolished to make room for Piazza S. Pietro in 1656 and totally pulled down in 1904 when the area near Porta Cavalleggeri was redesigned; the garden was embellished with many ancient statues, some of which in 1622 were donated to Cardinal Ludovico Ludovisi who placed them in his villa (you may wish to see the head of Juno Cesi, which was highly praised by Goethe). Other statues were bought in 1720 by Pope Clement XI for Musei Capitolini. 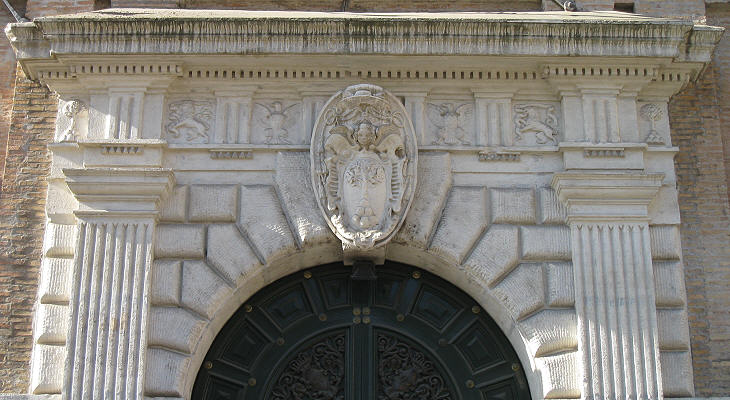 Detail of the portal