S. Clemente
(Vasi at work in the Grand View of Rome) 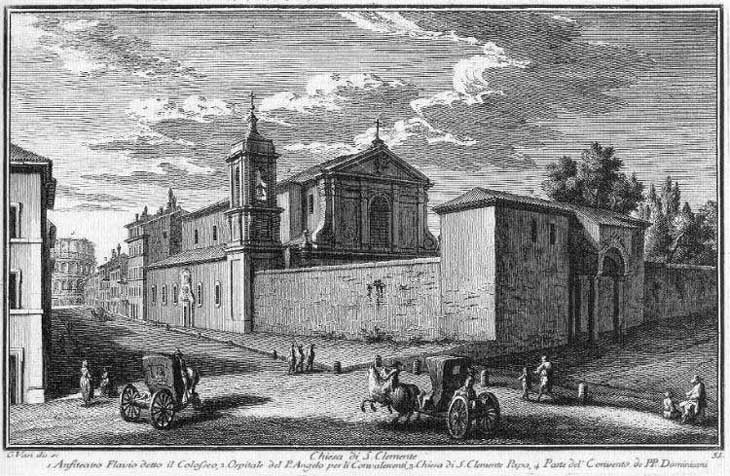 Giuseppe Vasi regarded himself as an architect, rather than as a painter. He was always very accurate in depicting architectural details of palaces and churches, but occasionally he did not pay enough attention to the consistency of the shadows projected by buildings. In this 1753 plate the façade of S. Clemente is in the shadow and based on the angle made by sunlight on the porch one can assume the view was taken in the afternoon. The house on the left side of the etching and Colosseo at the end of the street are well illuminated and this occurs in the morning. In addition the two gigs project shadows which are not consistent with each other.
The view is taken from the green dot in the small 1748 map below. In the description below the plate Vasi made reference to: 1) Anfiteatro Flavio (Colosseo); 2) Ospedale del Padre Angelo; 3) Chiesa di S. Clemente; 4) Monastero dei Padri Domenicani. 1) is covered in another page. The small map shows also: 5) Casino Evangelisti Guidi; 6) Casino Fini; 7) S. Giacomo del Colosseo. The dotted line in the small map delineates the border between Rione Monti (upper part) and Rione Campitelli (lower part). 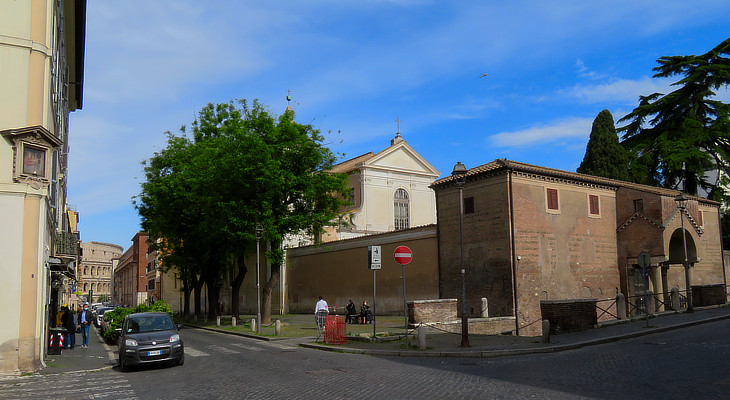 The street leading to Colosseo was opened by Pope Sixtus V to facilitate the access to Piazza di S. Giovanni in Laterano; at Vasi's time it was an important street, but today cars and buses use a modern parallel street, so this corner of Rome is pretty much as it was in the XVIIIth century. The long pontificate (1703-1721) of Pope Clement XI was characterized by major financial difficulties, which in part stemmed from a series of natural disasters (a major flood in 1702, an earthquake in 1703, a drought in 1706) and in part were caused by the Spanish Succession War during which the Papal State was crossed by French and Austrian armies en route to the Kingdom of Naples. The Pope would have liked to associate his name with a major embellishment of Rome, but he had to content himself with the restoration of some ancient churches such as S. Clemente, S. Eusebio and S. Maria in Cosmedin, leaving the honour and the burden to take care of some great basilicas (i.e. S. Giovanni in Laterano, S. Croce in Gerusalemme and S. Maria Maggiore) to his successors.
Carlo Stefano Fontana was the architect in charge of the renovation of S. Clemente which mainly involved the façade, the ceiling and the side entrance. The architect made large use of the papal coat of arms and heraldic symbols in the decoration of the new parts of the church (the image used as background for this page shows a detail of the ceiling). You may wish to see the church as it appeared in a 1588 Guide to Rome when it had a Romanesque bell tower. In 1667 S. Clemente and the adjoining monastery were assigned to Irish Dominican Friars. Ancient chronicles set the foundation of the church in the late IVth century and until the XIXth century it was thought that the ancient building had been replaced by a new one in the XIIth century.
In 1857 Fr. Joseph Mullooly, Superior of the convent, started excavations to drill a well in the courtyard and he eventually discovered the IVth century basilica beneath the floor of the current church. 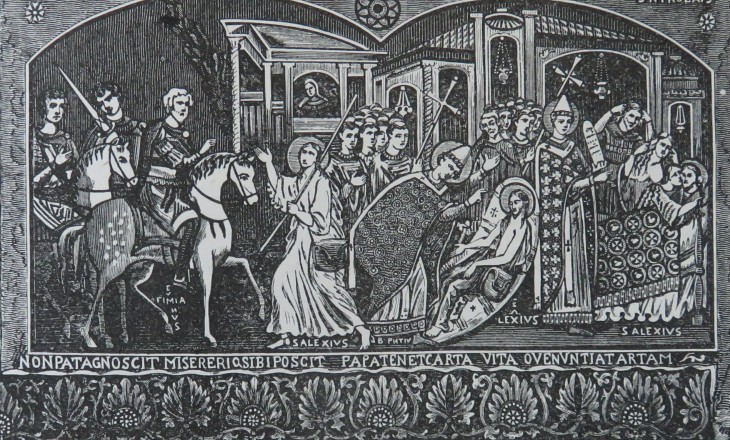 Before 1857, when people wished to give the idea of a Constantinian church arranged as in primitive times, they chose St. Clement. (..) A few years ago the real Constantinian basilica was discovered, buried under the present church. (..) As the diggers removed the earth with which the crypts were filled up, they perceived by the light of their torches the walls gradually peopling themselves with strange forms resuscitated from the darkness (..) the church underground being a gallery of paintings. (..) It is not without an emotion above ordinary curiosity that you prepare in one of the low naves, while the guides are lighting their torches, to descend (..) down to a monument of a yet more venerable antiquity. F. Wey Lower church: XIth century frescoes: (left) Daniel spared by the lions; (right) St. Blaise picking a thorn from the throat of a child (from "Rome, its Churches, ...)

Eventually the various phases of the life of the lower church were reconstructed. The frescoes which most impressed the first explorers are dated late XIth century, most likely after 1084 when Robert Guiscard sacked this part of Rome. Their life span was very short because the upper church was consecrated in 1118.
Unfortunately the frescoes were damaged by humidity after their discovery. We therefore mainly know them through the drawings which were made in the late XIXth century.

The beautiful schola cantorum (screen of the choir) belonged to the lower basilica and it was relocated to the new one in the XIIth century; you can see in more detail this work of art in the historical section of this website, whereas details of the apse mosaic are shown in a page on the golden mosaics of Rome and the painting on the ceiling in a page on the iconography of saints. 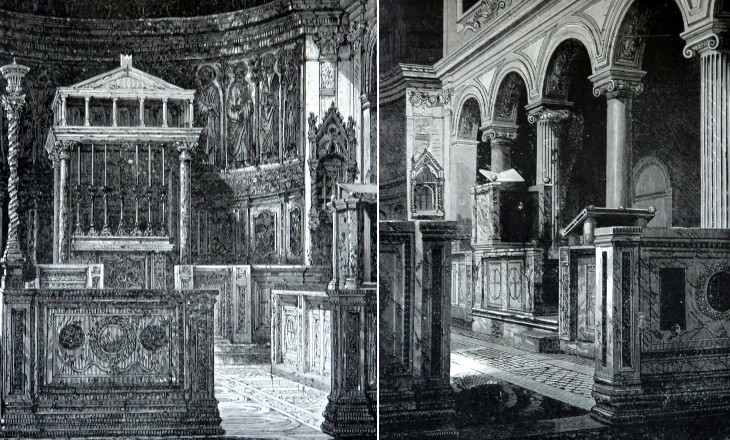 Details of the interior (from "Rome, its Churches, ..)

The Irish Dominican Friars are still in charge of S. Clemente and they have developed an advanced website (external link - it opens in another window). They are however very strict in not allowing any kind of photographing inside the church, unlike what occurs in almost all Roman churches and basilicas including those belonging to the Holy See. You may wish to see two 1905 paintings by Alberto Pisa showing the interior of the church. 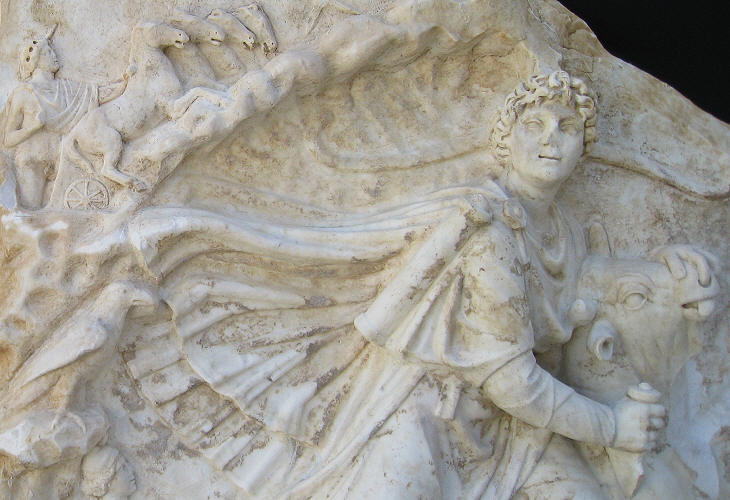 Relief portraying Mithra slaying the bull (on the left the chariot of Sun and a raven) - Museo Nazionale Etrusco di Villa Giulia (see another section of this relief in a page covering S. Prisca)

Eventually the excavations led to the discovery of a Roman building under the IVth century basilica. It housed a mithraeum; it is the only one in Rome which can be visited on a regular basis. A mithraeum was designed so that it had the appearance of a small cavern (spelaeum), therefore it did not have windows and very often it was located underground. Usually the god was portrayed in a relief, rather than in a statue; this because the relief could include references to various aspect of Mithraism. It is thought that the sacrifice of the bull was a reference to Taurus, a zodiacal constellation, and to the gradual shift in the orientation of Earth's axis of rotation away from that constellation. It is interesting to note that Mithra never looks towards the bull, an additional indication that the sacrifice was a metaphoric one.
The IIIrd century AD was the golden age of this religion, which had many points in common with Christian practices and beliefs: Mithra was born out of a virgin during the winter solstice; the followers went through various steps of initiation; ceremonies included forms of baptism and the consumption of bread and wine. The cult of Mithra had also points in common with that of Sol Invictus, the worship of the Sun as the only god, which was very popular among the ranks of the Roman legions.
Ravens had positive connotations: the raven was the link between Mithra and the Sun and the name given to the first step of the initiation ladder; ravens had positive associations also in accounts about the lives of early saints: a raven gave a loaf of bread to St. Paul the Hermit every day and a raven prevented St. Benedict from eating poisoned food.
You may wish to see a mithraeum near Palazzo Barberini (with frescoes) or at Ostia (with a statue). Padre Angelo (Paoli) was a Carmelite monk who used to visit the sick at Spedale di S. Giovanni in Laterano; towards the end of the XVIIth century he founded an institution to help those recovering from illness. During the pontificate of Pope Clement XI a small church was designed by Giuseppe Sardi. The façade is the only remaining part of the church and of the buildings which housed the institution.
The restoration of S. Clemente was accompanied by the construction of several new buildings near the church; they have not been significantly modified since then (the image shows that behind the church; that on the other side of the street can be seen in another page). This elegant building was designed by Giovanni Battista Mola for the Evangelisti family in the XVIIth century; in the XVIIIth century it was modified and bought by the Guidi family (this name appears in the 1748 map at the top of the page); it was recently turned into a hotel. It enjoys a commanding view over Ludus Magnus and Colosseo. The motto on the loggia is a quotation from Cicero Comite fortuna, duce virtute (to be led by virtue while being accompanied by good luck). You may wish to see more Roman Loggias. A small XVIIth century building (Casino Fini) has lost its original appearance because its closeness to Colosseo has led to opening too many shops and cafés and in addition only half of it was repainted.
Between Casino Fini and Colosseo there was a church (S. Giacomo del Colosseo) with a hospital (a branch of Spedale di S. Giovanni). In 1815 it was pulled down to enlarge the open space around Colosseo.