Chiesa di S. Prassede
(Vasi at work in the Grand View of Rome)

Links to this page can be found in Book 7, Day 2, View B8 and Rione Monti.

Subura (Subburra according to Vasi and Suburra in modern Italian) was a neighbourhood of Ancient Rome which lay to the north of Foro di Augusto and was populated by ordinary people; it had many inns and brothels which gave a derogative connotation to the term Subura, but it was also the quarter where the Christian faith spread more rapidly. This explains the presence of three ancient and large churches very close one to the other: S. Maria Maggiore, S. Pudenziana and S. Prassede.
Vasi dedicated a minor etching to this very old church because its exterior was almost completely hidden by other buildings and only a small porch indicated its presence. The view is taken from the green dot in the 1748 map below. In the description below the plate Vasi made reference to: 1) S. Prassede; 2) Strada della Nuova Subburra (which led to SS. Vito e Modesto). 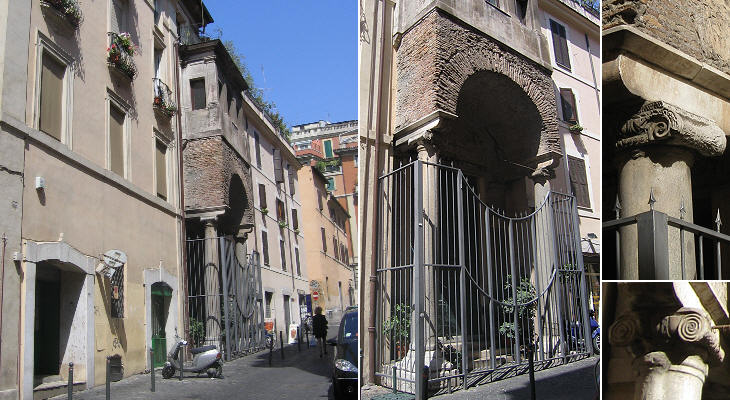 The XVIIIth century building to the left of the porch has not been modified in a substantial way, whereas the medieval houses to the right of the porch and the loggia above it were incorporated into a XIXth century construction. The porch is very similar to those of S. Clemente and S. Maria in Cosmedin; it was built in the XIIth century making use of ancient columns and capitals (which were also used as bases for the columns); however the capital of the left column is a medieval copy of that on the right column. The street is now called Via di S. Martino ai Monti, after another old church in this area.

The porch is not the immediate entrance to the church, but it leads to a small courtyard; this can be observed in other very old churches (e.g. S. Clemente, S. Agata dei Goti and S. Silvestro in Capite); this design was linked to practices of the Early Christians when the admission to the community of believers was subject to a period of learning during which the catechumens (those who are instructed) attended the religious services (or part of them) in a narthex (place for penitents) outside the church. In Byzantine churches the narthex is sometimes incorporated into the building (you may wish to see that of St. Saviour in Chora in Costantinople). The practice of adult baptism was discontinued in Rome when the Christians became the vast majority of the population.
The façade was redesigned in the late XVIth century: at that time its upper part had a decorated window (you may wish to see it in a 1588 Guide to Rome). 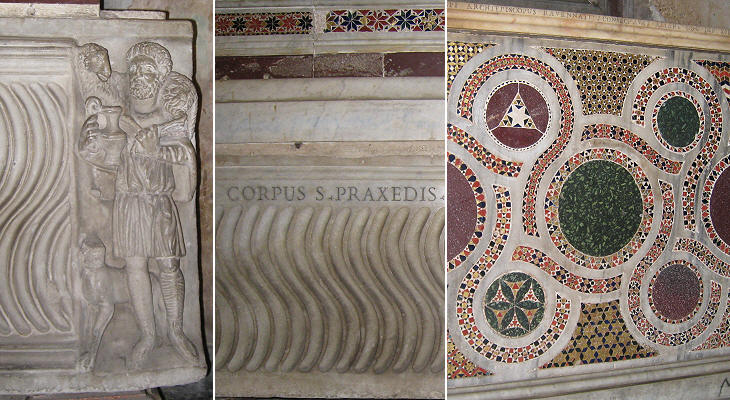 (left) The Good Shepherd on a IVth century sarcophagus; (centre) detail of the sarcophagus with the bodies of Sts. Prassede and Pudenziana; (right) XVIIIth century altar which incorporates elements of the Cosmati pavement (XIIIth century)

S. Prassede was built in the IXth century by Pope Paschal I; it replaced a nearby church by the same name the existence of which is first recorded in the Vth century; according to tradition Prassede and her sister Pudenziana were daughters of Pudente, a Roman senator converted by St. Paul; they became very popular saints for having gathered the blood of three thousand martyrs with a sponge and filled a well with it. 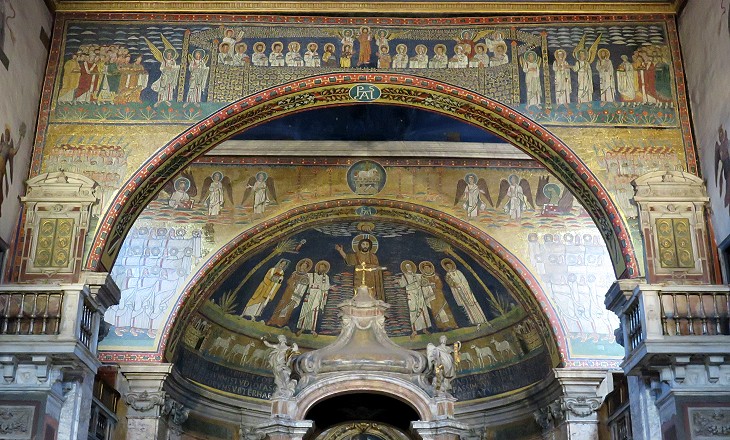 The mosaics of the great apse are unusually fine. In the centre is Christ, bearded, above him is the divine hand with a wreath, and underneath him are sunset clouds. Three saints stand on either hand and the river Jordan, which is named, flows round the apse below. These all are on a dark blue ground. On a gold frieze below this is the Lamb in the centre, with nimbus, standing on a green ground whence flow the four rivers of Paradise, and right and left are six sheep approaching him. (..) Between the triumphal arch and the apse is a narrow shallow transept: both the wall over the apse and the triumphal arch are covered with mosaic pictures; the latter representing the Heavenly Jerusalem.
Thomas Graham Jackson - Byzantine and Romanesque Architecture - 1920
The new church was a large building with a spacious central nave and two minor ones separated by ancient columns (probably taken from the ruins of Terme di Traiano); the apse was decorated with mosaics and it was preceded by an arch which also was decorated with mosaics (you may wish to see a page on the Golden Mosaics of Rome). 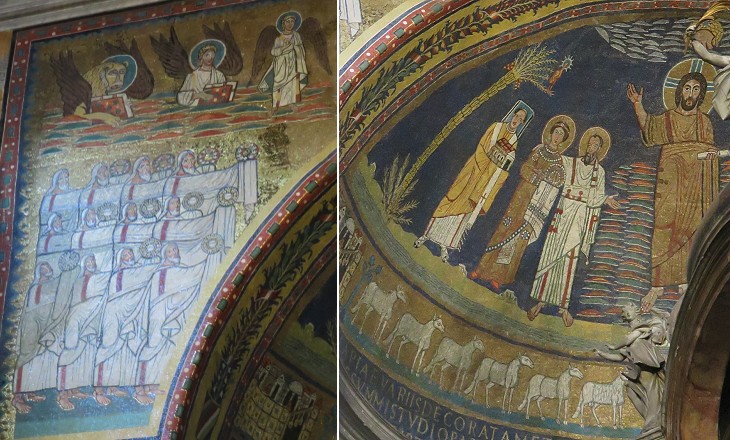 Details of the mosaics: (left) arch of the apse: twelve of the Twenty-four Elders (they were depicted also in a Vth century mosaic at S. Paolo fuori le mura) and symbols of the Evangelists; (right) apse: Pope Paschal I with the model of the church and above him a phoenix, symbol of Resurrection; next to him St. Pudenziana and St. Paul

The overall subject of the mosaics is the Second Advent of Jesus Christ as described in the Apocalypse of John (aka Book of Revelation). This subject had already been depicted at SS. Cosma e Damiano in the VIth century. It had a political significance in addition to the religious one. Pope Paschal I was at loggerhead with Roman supporters of the Carolingian Holy Roman Emperors and the mosaic showed the final triumph of Jesus (and of the Roman Church). The Pope decorated with mosaics also S. Cecilia and S. Maria in Domnica. 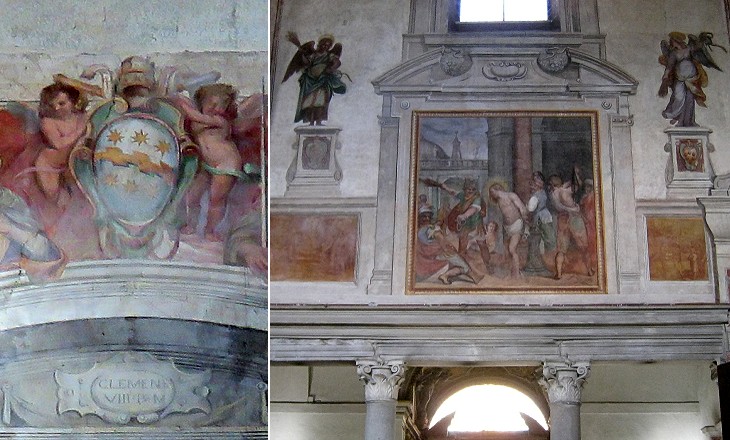 (left) Coat of arms of Pope Clement VIII by Agostino Ciampelli; (right) Flagellation by Paris Nogari (a reminder of the Sacred Column which was brought to Rome in 1222 by Cardinal Giovanni Colonna and is housed in a chapel of the church)

The original design of S. Prassede was modified in the early XIIIth century when the structure of the building was reinforced by incorporating some columns into pillars and by adding three arches to support the ceiling. In the late XVIth century, at the initiative of Cardinal Carlo Borromeo other changes were made and in particular two thirds of the windows were closed in order to strengthen the walls and to make more space available for educative paintings. In the XVIIIth century Francesco Ferrari designed a new altar and a new pavement replaced the old XIIIth century Cosmati work. In the XXth century many late Renaissance and baroque additions were cancelled and a modern "Cosmati" pavement replaced that of the XVIIIth century.
The result of all these changes is that the interior of the church lacks that harmony that can be observed in S. Maria Maggiore, which also underwent many modifications; the details however are extremely interesting. 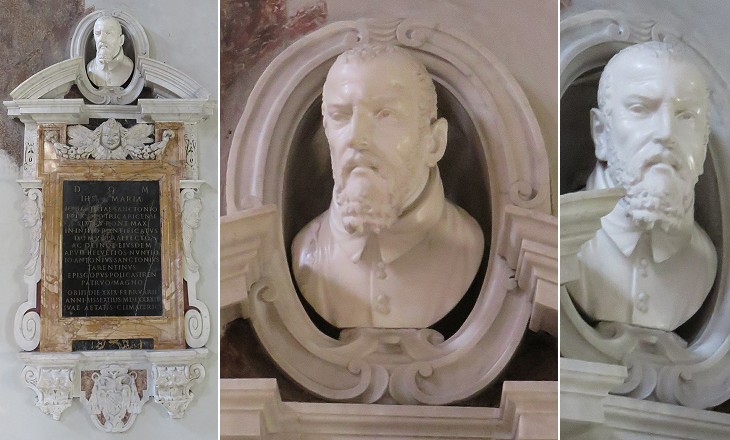 This small bust which projects from its niche is almost unanimously attributed by art historians to Gian Lorenzo Bernini, who most likely was not involved in the design of the monument. Monsignor Santoni passed away in 1592 and the bust was made in 1615-1617. Bernini was born in 1598 so this bust is one of his first funerary monuments along with that to Giovanni Vigevano at S. Maria sopra Minerva. Eventually Bernini designed monuments where the dead person was portrayed in the act of praying (but only his bust was visible).

Exterior: the two black columns, their capitals and the cornice fragment are all ancient as is the funerary urn placed above them; the inner band of mosaics portrays the Virgin Mary between Sts. Valentino and Zenone and eight women; the outer band portrays Jesus Christ and the Twelve Apostles; the two characters in the upper corners are perhaps Moses and Elias; those in the lower corners are XIXth century paintings portraying Pope Paschal I and another pope

The little chapel of S. Zenone is lined with admirable mosaics, and is one of the best preserved examples of Byzantine work in Italy. Its doorway has Romanesque Ionic capitals, carrying a cornice of late Roman work. Jackson
Pope Paschal I built a small funerary chapel for his mother Teodora while she was still alive; the chapel however was dedicated to Zenone, a martyr of whom we know little besides the name. Its decoration was based on very fine mosaics and on an elaborate reutilization of ancient materials; its beauty was appreciated throughout the centuries and the chapel was also known as Giardino del Paradiso.
The image used as background for this page is based on a mosaic portraying St. Pudenziana. 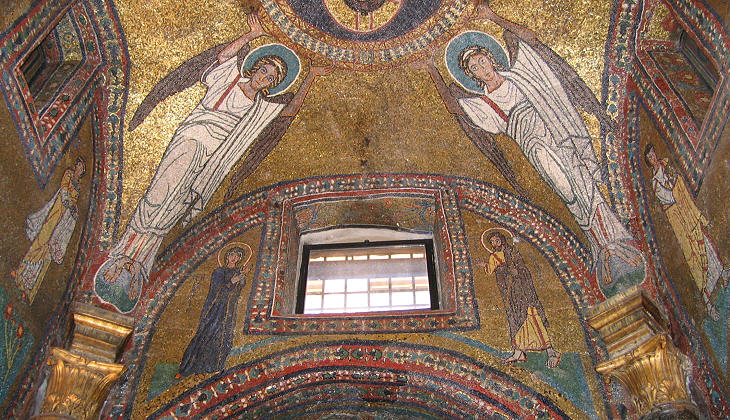 Deesis (iconic portrayal of Jesus Christ between the Virgin Mary and St. John the Baptist): the missing central figure of Jesus Christ was metaphorically represented by the light coming through the window. Another image of Cappella di S. Zenone can be seen in the historical section