Links to this page can be found in Book 7, Day 2 and Rione Monti. 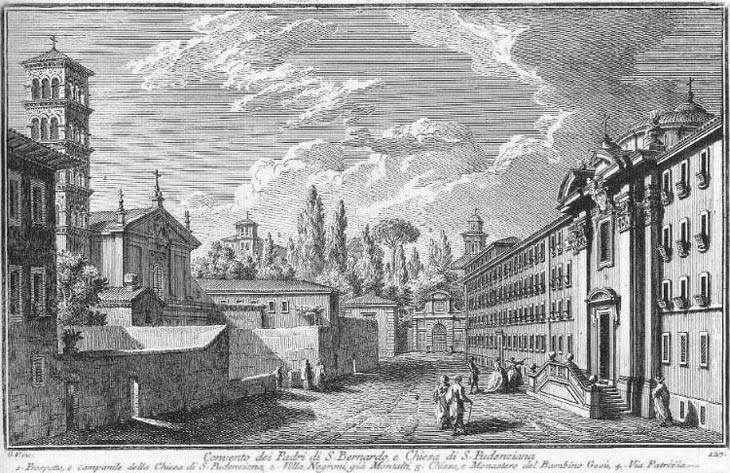 Occasionally the heading given by Vasi to his etchings may mislead the viewer; the long building on the right side of the plate is a nunnery, whereas the friary of S. Bernardo is the unassuming house behind S. Pudenziana. The branch of the Cistercian order which was named after St. Bernard of Clairvaux had its main friary at S. Bernardo alle Terme.
The plate also shows some details of Villa Negroni (aka Villa Peretti or Montalto): the gate at the end of the street was known as Portone Viminale and the building of which Vasi shows only the tip was Palazzetto Montalto; they were both designed by Domenico Fontana for Pope Sixtus V at the end of the XVIth century. Fontana raised the level of the street in order to facilitate the access to the villa, thus partially "burying" S. Pudenziana (the opposite nunnery was built at a later time).
The view is taken from the green dot in the 1748 map below. In the description below the plate Vasi made reference to: 1) Façade and bell tower of S. Pudenziana; 2) Villa Negroni; 3) Church and nunnery of Bambin Gesù; 4) Via Patrizia. The name of this street was already Via Urbana (with reference to Pope Urban VIII) at Vasi's time, but he preferred to use an older name of Latin origin Vicus Patricius, which meant that the patricians (the members of the noble class in ancient Rome) had their houses along this street. 2) is shown in more detail in another page. 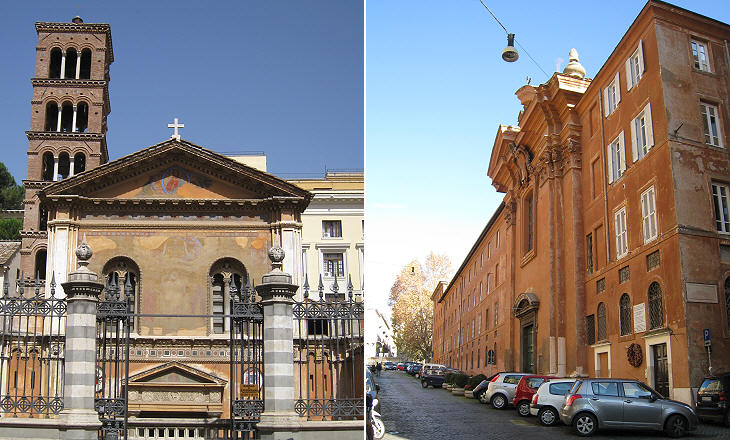 The level of the street was raised to a higher level again in the late XIXth century and now there are no longer steps leading to Chiesa del Bambin Gesù and S. Pudenziana is almost in a hole: the façade of this church shown in the plate was designed in 1585-1599 by Francesco da Volterra (you may wish to see how it appeared in a 1588 Guide to Rome); in 1870 it was entirely replaced by a new one. Villa Negroni does not exist any longer and the street continues until it reaches the large square in front of Stazione Termini, the Central Railway Station of Rome. 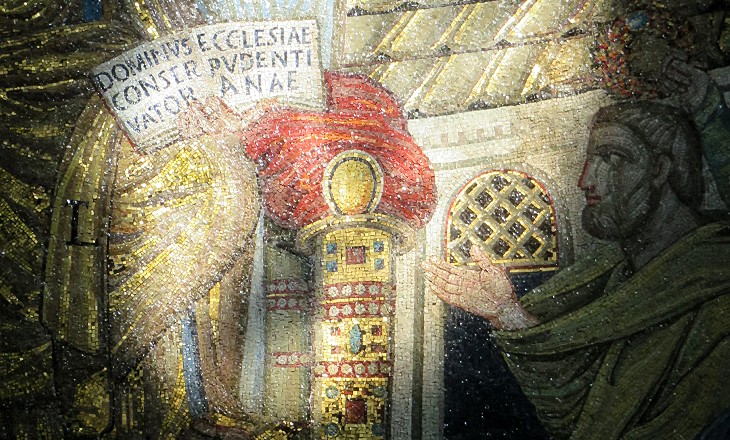 Detail of the mosaic of the apse making reference to "Ecclesiae Pudentianae". The entire mosaic can be seen in a page on the Mosaics in the Churches of Rome and another detail in the historical section

I went to Santa Pudentianas Church standing in the ancient street called Vicus Patricius. This Church was built upon the place where the house of Pudens, a Senator and Father of St. Pudentianas lived. And here it was that St. Peter at his first coming to Rome lodged, having converted this Pudens and his two Daughters Pudentiana and Praxedes.
Richard Lassels' The Voyage of Italy, or a Compleat Journey through Italy in ca 1668
According to tradition Pudente, a Roman senator (converted by St. Paul) gave hospitality to St. Peter and turned part of his house into an oratory where Christians met to pray. A church replaced the oratory in the late IVth century and a century later its apse was decorated with a very fine mosaic.
Archaeological research indicates that the church was built by modifying a hall of the private baths (Terme di Novato) of a late IInd century Roman house. 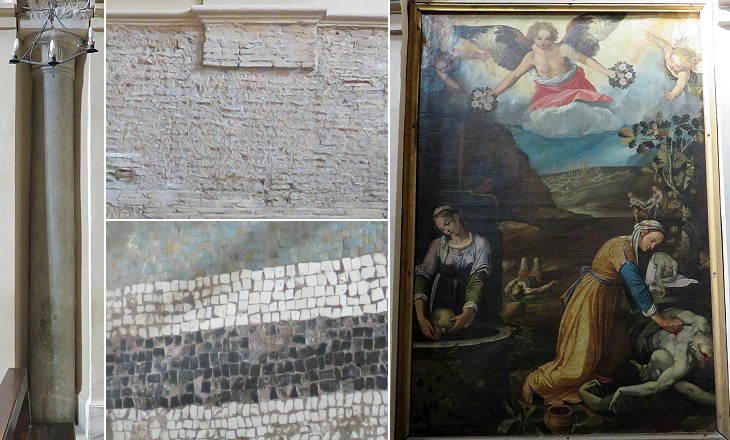 Interior: (left) ancient column, wall and floor mosaic; (right) Sts. Pudenziana and Prassede take care of the relics of 3,000 martyrs by placing them inside a well (by Antonio Tanari - early XVIIth century)

I saw the dry Well into which St. Pudentiana put many Relicks of Martyrs to conserve them. I looked into it with a lighted Taper let down in a string; and saw many curious relics desked up in the side of the wall. Lassels
A puteal (wheel-head) in a lost chapel and now near Cappella Caetani is said to have been used by the two saints to save the relics of the martyrs and their blood which they gathered with a sponge.
The three naves of the church were separated by rows of columns which in the VIIIth century were incorporated into walls to strengthen the building. Archaeologists have identified the location of ancient baths beneath the apse. They have also cleared some parts of the church walls and floor from later additions to show their original aspect.
Pudenziana and her sister Prassede (to whom a larger church was dedicated not far away and whose name means she who acts well) were venerated for their piety, but the accounts about their lives and martyrdoms are not consistent with historical evidence. The word Pudentianae in the mosaic inscription most likely meant of Pudente, but its meaning was misinterpreted as of Pudenziana during the Middle Ages and the hagiography of the two daughters of Pudente originated from that mistake. 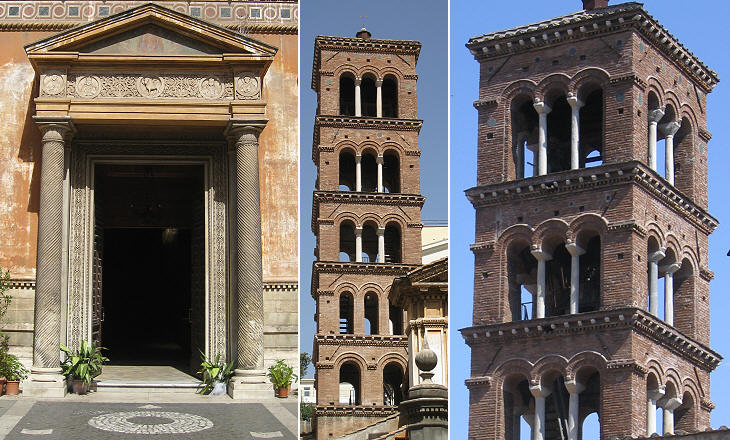 The portal is dated XIth century a very difficult period in the history of Rome during which not many initiatives were taken for the maintenance and embellishment of churches.
The Romanesque bell tower was added in the XIIIth century or slightly earlier. It follows the pattern of many other Roman bell towers which you can see in a page dedicated to this type of buildings.

Reliefs of the portal portraying (left to right): Sts. Pastore, Pudenziana, Prassede and Pudente and in the centre the Lamb of God

The medieval church was largely modified in the XVIth century and again during the 1870s by Cardinal Lucien Bonaparte; this led to some retouching of the medieval decoration of the door (which you can see in the image used as background of this page) and of the lintel; the five circular reliefs are among the finest examples of medieval sculpture in Rome; the two female saints are portrayed with a crown, similar to what can be noticed in a mosaic at S. Maria in Trastevere; most likely also the two male saints wore a crown which was removed in the XVIth century. Pastore in Italian means shepherd and the reference to St. Pastore is the result of the corruption of an earlier name of the building, i.e. Oratorio del Santo Pastore, a reference to Jesus as the Good Shepherd. 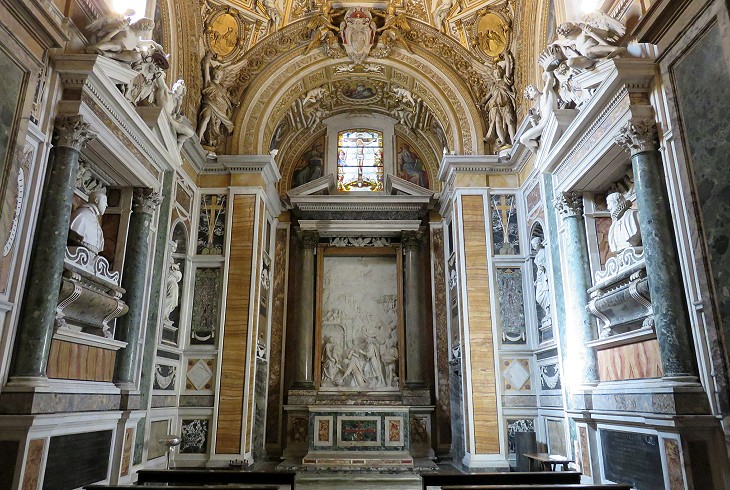 A medieval oratory was replaced by a chapel commissioned by Cardinal Enrico Caetani in the late XVIth century. It was designed by Francesco Capriani da Volterra and completed by Carlo Maderno. Cardinal Caetani belonged to a once very powerful Roman family. The Caetani reached the peak of their might in the late XIIIth century with Pope Boniface VIII (Cardinal Benedetto Caetani). Ceiling with mosaics portraying the Four Evangelists by Paolo Rossetti based on drawings by Federico Zuccari or by Cristoforo Roncalli; (right) angel by il Valsoldo

The chapel was built in the period between the construction of Cappella Sistina and that of Cappella Paolina in S. Maria Maggiore. It cannot compete in size with those chapels, but its decoration is as lavish as that of its larger sisters. It reflects the horror vacui (fear of empty spaces) which characterized the architecture of the second half of the XVIth century. 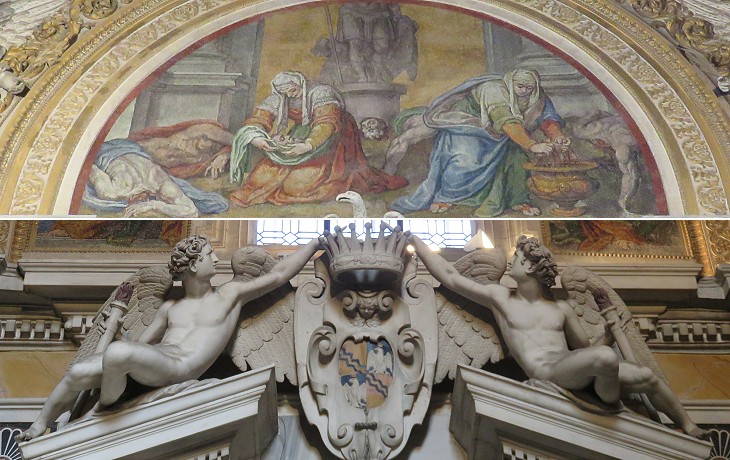 (above) Sts. Pudenziana and Prassede, mosaic by Paolo Rossetti; (below) Monument to Filippo Caetani: "genii" (guardian angels) by Camillo Mariani

Because of its reduced size Cappella Caetani allows a better appreciation of its decoration and in particular of some sculptures by artists who, similar to Camillo Mariani, were involved in the decoration of Cappella Paolina, but whose works there are "lost" among too many others. (left) Adoration of the Magi by Pietro Paolo Olivieri; (right) coats of arms of the Caetani

I saw the neat Chappel of the Caetani, with the back of the Altar in white Marble, curiously cut by Olivieri in a basso rilievo, representing the adoration of the Magi. Lassels
Cappella Caetani houses an early example of the marble reliefs which became very popular as altarpieces during the XVIIth century. In his work Pietro Paolo Olivieri followed a traditional pattern established by Renaissance Florentine sculptors. He depicted the persons in the central scene using a very high relief whereas the retinue of the Magi was depicted using stiacciato, a very low relief. You may wish to see a page on Baroque marble altarpieces. 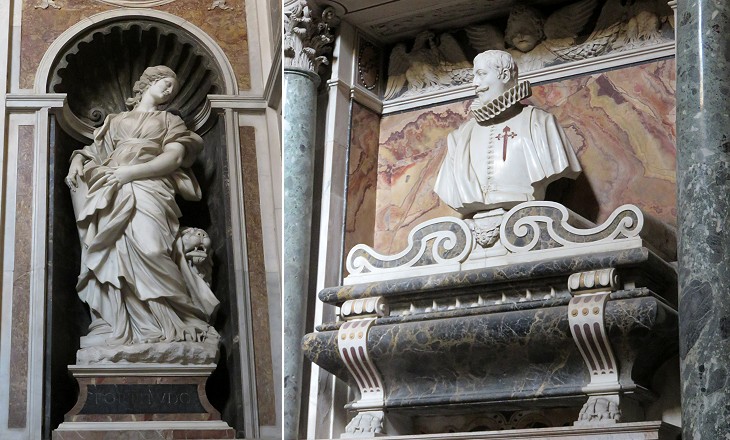 (left) Strength by Francesco Mari; (right) Monument designed by Giovan Battista della Porta with a bust of Filippo Caetani which is attributed to Pietro Paolo Naldini. The Red Cross/Sword is the symbol of the Order of Santiago, a Spanish military order which was founded in the XIIth century to protect the pilgrims going to Santiago de Compostela

Francesco Caetani, Duke of Sermoneta and Spanish Viceroy of Naples, completed the decoration of the chapel in ca. 1668 by commissioning some statues to sculptors who belonged to the circle of Gian Lorenzo Bernini. You may wish to see the Caetani Castle at Ninfa, near Sermoneta. The globes at the XIXth century street entrance to S. Pudenziana show a coat of arms with a royal crown inside a cardinal's hat; a similar coat of arms was adopted by Henry Benedict, Cardinal of York, the last of the Stuarts (King Henry IX). This coat of arms belongs to Lucien-Louis-Joseph-Napoléon Bonaparte, Prince of Canino and grandson of Lucien Bonaparte, a brother of Emperor Napoleon I. He was appointed cardinal in 1868, at a time when Pope Pius IX relied on the support of his cousin Emperor Napoleon III for defending the Papal State. Cardinal Bonaparte died in 1895 and was buried in the church. You may wish to visit Museo Napoleonico and learn more about the "Roman" Bonaparte. 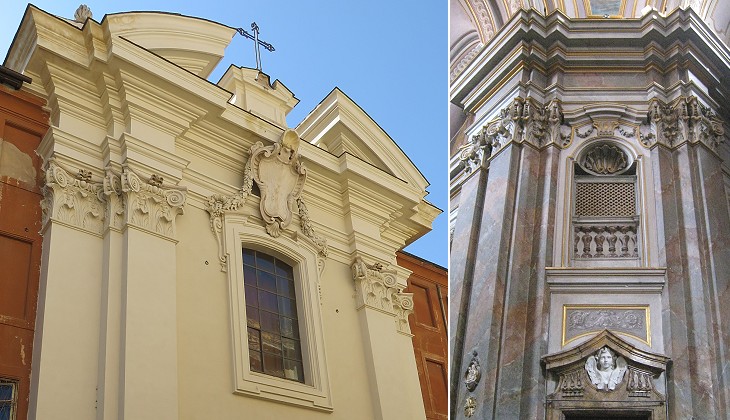 In XVIIth century Rome the access to schools was reserved to boys; girls received their education at home and only the wealthiest families were in a position to have a private tutor; in 1671 Congregazione del SS. Bambin Gesù, a congregation aiming at providing some basic education to girls was founded; at the beginning its premises were near Tor Margana, but the success of the initiative led to the construction of a large nunnery/school which included a church. Initially Alessandro Specchi, the architect of Porto di Ripetta was asked to design the new buildings, but his projects were too expensive and the commission was assigned to Carlo Buratti (who designed the Cathedral of Albano); at his death in 1734, Ferdinando Fuga was asked to complete the church. The façade has been repainted with the light colour it had at Vasi's time, whereas the adjoining buildings retain the dark colour which characterized Rome in the XIXth century and for most of the XXth century. You may wish to see a page showing some of the changes which occured in recent years.