Collegio Clementino
(Vasi at work in the Grand View of Rome)

Links to this page can be found in Book 9, Map C2, Day 4, View C5, Rione Ponte and Rione Campo Marzio. 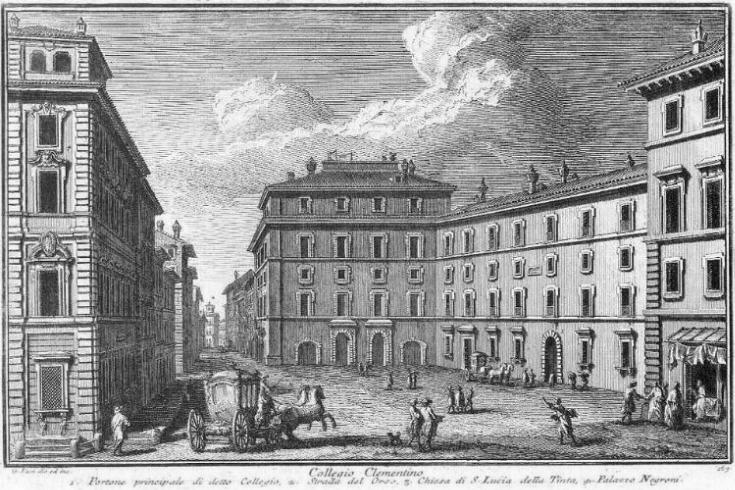 In 1759 Giuseppe Vasi published his ninth book of etchings which showed the colleges, the hospitals and other charitable institutions of XVIIIth century Rome. The plates of the book are often the only ones which depict some of them, because they were not housed in palaces having a monumental aspect or an artistic relevance. This is particularly true for Collegio Clementino which in 1936-1938 was demolished at the same time as the buildings surrounding nearby Mausoleo di Augusto. The college was named after Pope Clement VIII who founded it in 1595. It was not very important, but Vasi included it in his book because Pope Benedict XIV studied there. Most likely Vasi developed his plan for the book before the death of the Pope in 1758.
The view is taken from the green dot in the 1748 map below. In the description below the plate Vasi made reference to: 1) Main entrance to Collegio Clementino; 2) Strada dell'Orso (bear); 3) S. Lucia della Tinta; 4) Palazzo Negroni. The map shows also 5) Mausoleo di Augusto; 6) Palazzo Primoli. The dotted line in the map delineates the border between Rione Ponte (left) and Rione Campo Marzio (right). 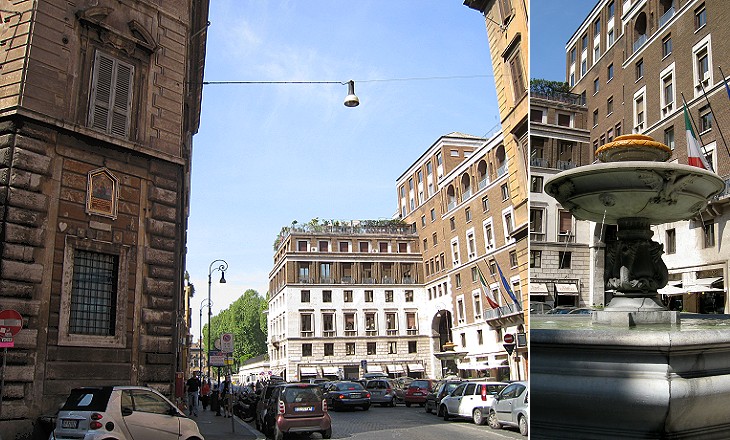 (left) The view in April 2009; (right) the fountain from Piazza del Popolo

The old building has been replaced by a new one in a totally different style. In 1940 a fountain was erected in the square. It was removed from Piazza del Popolo in 1823 and relocated opposite S. Pietro in Montorio. Later on it was removed again and kept in a municipal warehouse, where some of its components were lost. It shows the eagles and the dragons of Pope Paul V Borghese, but the original fountain had only the dragons of Pope Gregory XIII Boncompagni. The eagles were added (as shown in the image used as background for this page) by Giangiacomo Borghese, Governor of Rome in 1939-1943. The corner of Palazzo Negroni is the only remaining evidence of what Vasi depicted in the plate. 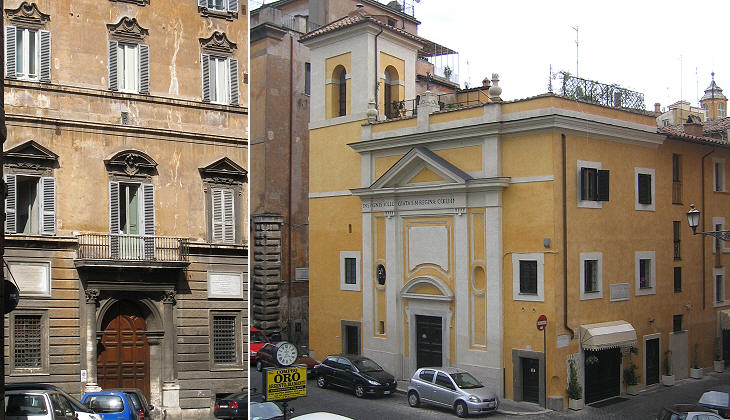 (left) Palazzo Gonzaga Negroni: façade in Via della Scrofa, opposite Palazzo Cardelli; (right) S. Lucia della Tinta (at the upper right corner the lantern of S. Antonio dei Portoghesi). The photo was taken from the "lungotevere", the late XIXth century streets which run along the River Tiber

The palace has a long list of landlords. The most important one was Cardinal Scipione Gonzaga who lived there in 1567-1593. He was fond of poetry and he hosted Torquato Tasso in his home. Later on the building was acquired by Cardinal Giovan Francesco Negroni who bought also Villa Peretti.
S. Lucia della Tinta was spared by the many changes made in the area and in particular by the construction of walls to prevent the River Tiber from flooding in the 1880s. The church is recorded in medieval chronicles but it was largely redesigned in 1715. It is called della Tinta (dye) because many dyers lived nearby. It was recently repainted and you may wish to see it with its old colour.

(left) XVIIIth century engraving based on a 1575 drawing by Étienne Dupérac; (right) the interior in 1936 when it was used as a concert hall

24th February 1645. The Mausoleum Augusti, betwixt the Tyber and the Via Flaminia, now much ruined, which had formerly contended for its sumptuous architecture. It was intended as a cemetery for the Roman Emperors, had twelve ports, and was covered with a cupola of white marble, environed with stately trees and innumerable statues, all of it now converted into a garden.
John Evelyn's Diary and Correspondence - 1644-1645
At the time of the drawing by Duperac the building housed a garden owned by the Soderini, a Florentine family who lived at Palazzo Altemps, where they displayed their collection of antiques.

Kunsthistorisches Museum of Vienna: Roman sarcophagus from the Soderini Collection; it depicts the four horses of a racing chariot being rewarded with bags of money; the inscription is unrelated: "Respice et crede: hoc est, sic est, aliut fieri non licet" (look and believe: this is it, it is how it is, it cannot be otherwise)

To-day was beast-baiting in the mausoleum of Augustus. This large building, empty inside, open above and quite round, is now turned into an amphitheatre, an arena for bull-baiting. It will hold from four to five thousand persons. The spectacle itself was not very edifying for me.
J. W. Goethe - Italian Journey - July 16, 1787 - Translation by Charles Nisbeth.
In 1843 Rev. Jeremiah Donovan (Rome Ancient and Modern) reported that it is used principally for fireworks, equestrian exhibitions and occasional scenic representations and Augustus J. C. Hare (Walks in Rome) noted in 1875: It is used in summer as an open-air theatre, where very amusing little plays are very well acted. The 1883 Baedeker gave the following description of the mausoleum:: On a huge substructure, which contained the mortuary chambers, arose a mound of earth in the form of the terraces, embellished with cypresses, surmounted by a statue of the emperor, and environed with a park. In the Middle Ages it was converted into a fortress by the Colonnas; and a theatre is now fitted up within its precincts.
Eventually it was covered with a dome and turned into a concert hall. You may wish to see two concert programmes (it opens in another window), one of which by Accademia Musicale di S. Cecilia. 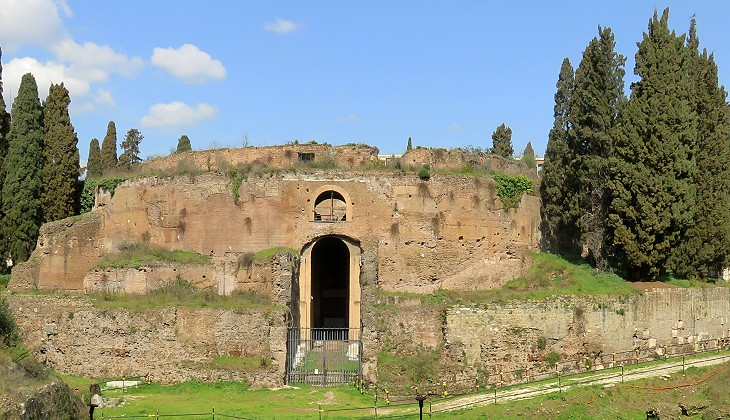 Mausoleo di Augusto; its entrance was flanked by two obelisks without hieroglyphs which are now on the Esquiline Hill and at Piazza del Quirinale

In the 1930s the glorification of the Roman Empire led the Fascist Government to the decision of freeing the remaining walls of the mausoleum from all later additions, including the concert hall. The new large square is surrounded by modern buildings and it is now called Piazza Augusto Imperatore. In the past it was known as Piazza degli Otto Cantoni (No 15 in Vasi's 1781 Map of Rome). 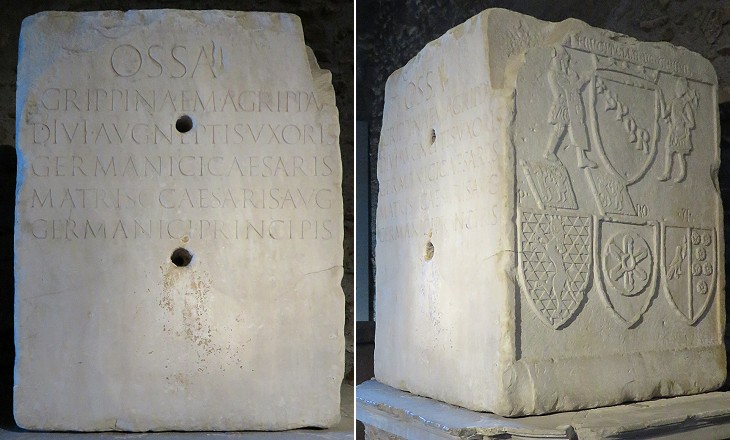 Musei Capitolini: cinerary urn of Agrippina Maior from Mausoleo di Augusto with the coats of arms of some "Conservatori di Roma"

According to the inscription the urn contained the Bones of Agrippina (Maior), daughter of Marcus Vipsanius Agrippa, granddaughter of the divine Augustus, wife of Germanicus Caesar, mother of Gaius Caesar Augustus Germanicus (Caligula) our prince. Had the inscription been written a few years later they would have added mother-in-law of Emperor Claudius and grandmother of Emperor Nero. You may wish to see some portraits of these members of the Augustan family which were found near Toulouse. Poor Agrippina Maior did not live enough to see the successes of her descendants. She was imprisoned and most likely starved to death by Emperor Tiberius who was envious of her popularity.
The use of the mausoleum was discontinued after the death of Nero, with perhaps the only exception of Emperor Nerva. The emperors of the Flavian Dynasty were buried in a (lost) temple they built on the Quirinale Hill. The ashes of Emperor Trajan were placed in the pedestal of Colonna Traiana. Eventually Emperor Hadrian built a mausoleum similar to that of Augustus for himself and the future emperors. All these funerary monuments, when they were built, were outside the pomerium (the official limit) of the City of Rome in compliance with a Vth century BC law.

Ara Pacis Augustae, the altar erected by the Senate to celebrate Augustus, can now be seen in a new museum which is located opposite the Mausoleum. On one side of the building there is a long inscription: the spiritual testament of Augustus, a summary of his achievements which was placed in temples dedicated to him, e.g. at Ancyra (today's Ankara). 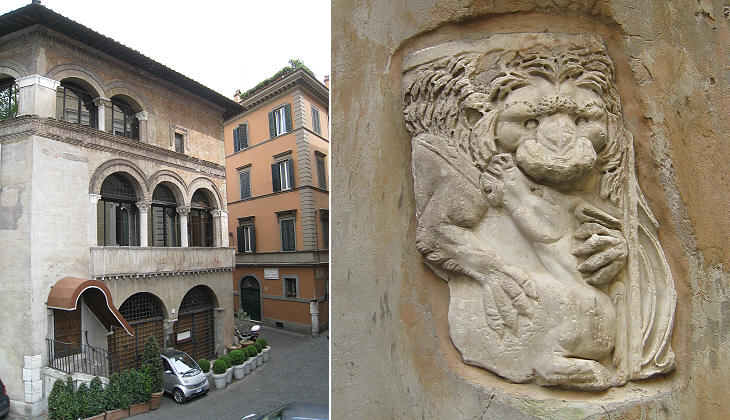 (left) Albergo dell'Orso; (right) the relief which has given the name to the street

The plate shows Strada dell'Orso, a street named after a Roman relief showing a bear (it is actually a lion). The area was near Porto di Ripetta and it was known for its cheap inns and brothels. One of the surviving medieval buildings is today a very expensive restaurant. It suffers from an excess of restoration. In the XVIth century it was an excellent inn (Albergo dell'Orso) and it was mentioned by Michel de Montaigne in his Voyage en Italie (1580-1581), but in the XVIIIth century it catered mainly to coachmen. 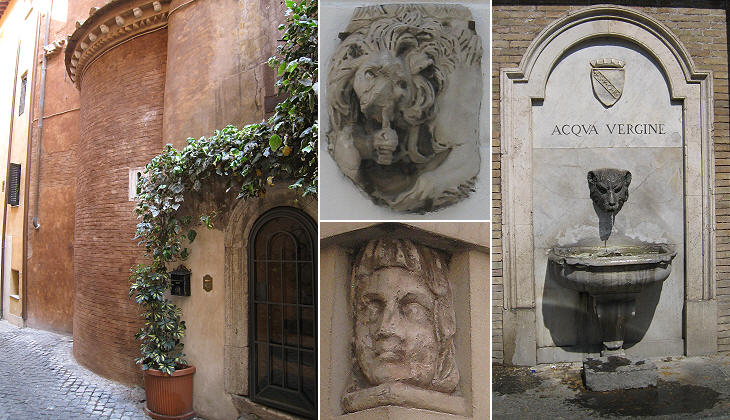 In the 1781 Map by Giuseppe Vasi Strada dell'Orso was a much longer street as it included also Via dei Coronari. They were part of Via Recta, a street opened by Pope Sixtus IV. The changes which occurred in the late XIXth century caused by the construction of Ponte Umberto I and Palazzo di Giustizia separated the two streets. 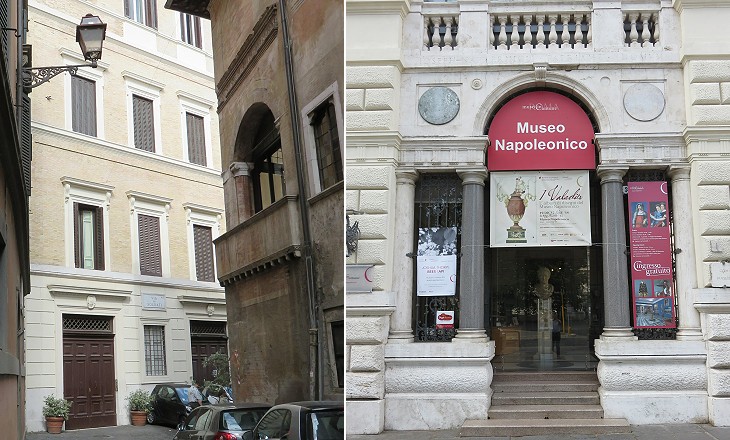 Palazzo Primoli has two faces. It was built in the XVIth century and its main entrance was in Piazza dell'Orso. In 1886 the area was modified by the construction of the walls along the river. A few years later, the owner of the palace, Count Giuseppe Primoli enlarged it and built a new façade in a XXth century Renaissance style. It faces Ponte Umberto I and Palazzo di Giustizia on the other side of the river. 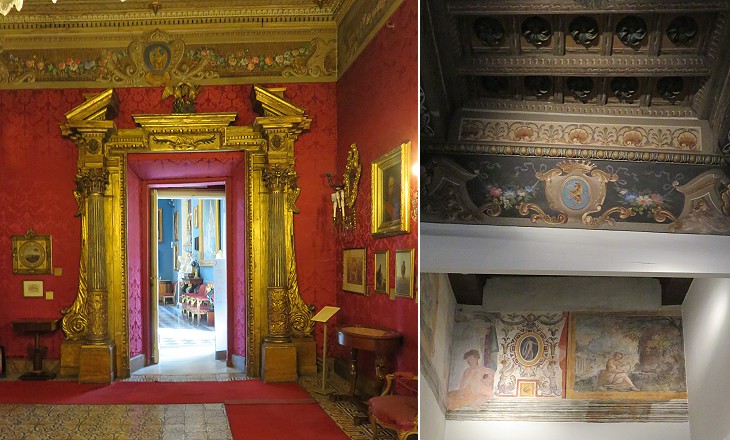 (left) A room in the new part of the palace; (right) decorations in the old part

Count Giuseppe Primoli was a grandson of Zénaïde Bonaparte, a niece of Emperor Napoleon and he decorated his palace in the style of the First French Empire, although some rooms in the rear part of the building retain their old ceilings and frescoes. In 1927 he donated his collection of paintings, statues and other memorabilia of the Bonaparte to the City of Rome to form what is now Museo Napoleonico. 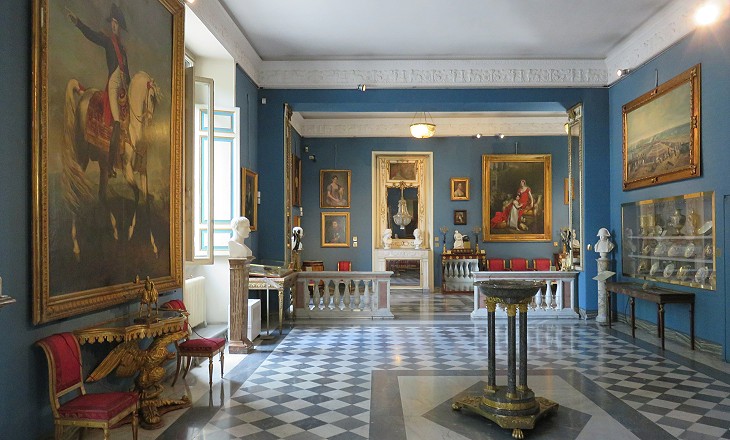 Many members of the Bonaparte family lived in Rome after the fall of the First French Empire. Letizia Ramolino Bonaparte, the Emperor's mother lived at Palazzo d'Aste, Louis Bonaparte, brother of Napoleon and former King of Holland at Palazzo Mancini, Lucien Bonaparte, another brother, was made Prince of Canino by Pope Pius VII, Julie Bonaparte, a relative of Count Primoli, married Marquis Alessandro del Gallo di Roccagiovine and lived in a palace in Piazza Farnese and another Bonaparte was made cardinal in 1868. 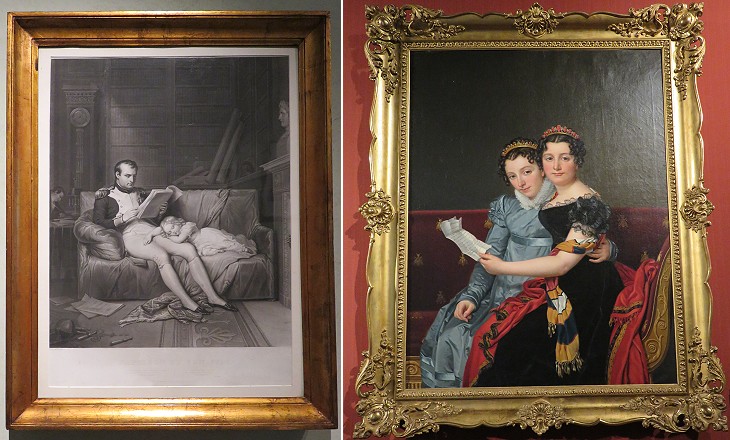 The present Prince of Canino, well-known for his successful devotion to science, is the son of Lucien Bonaparte. He married his cousin, the daughter of Joseph Bonaparte, and has a numerous family. He has been a good deal mixed up with the political changes in Rome since the accession of Pius IX., and is reputed to have shown much more activity than wisdom in public affairs.
George Stillman Hillard - Six Months in Italy in 1847-1848