- Interiors of Churches
(a woman at le Colonnacce by Alberto Pisa)

In 1908 William Dean Howells made the following comment in Roman Holidays and Others:
" I had known, I had never forgotten, that St. Peter's was very, very baroque, but I had not known, I had not remembered how baroque it was. It is not so badly baroque as the Church of the Jesuits either in Rome or in Venice, or as the Cathedral at Wuerzburg; but still it is badly baroque, though, again, not so baroque in the architecture as in the sculpture." The sentence shows that the Neoclassic stigma attached to Baroque churches and in particular to the decoration of their interiors, was still very strong even among the most sophisticated travellers. Not surprisingly the illustrated books published in that period for the British armchair travellers focused on the medieval churches of Rome, almost entirely neglecting the interiors of Baroque churches.
The paintings shown in this page are by Alberto Pisa and were published in 1905 to illustrate Rome, one of the Black's Beautiful Books. 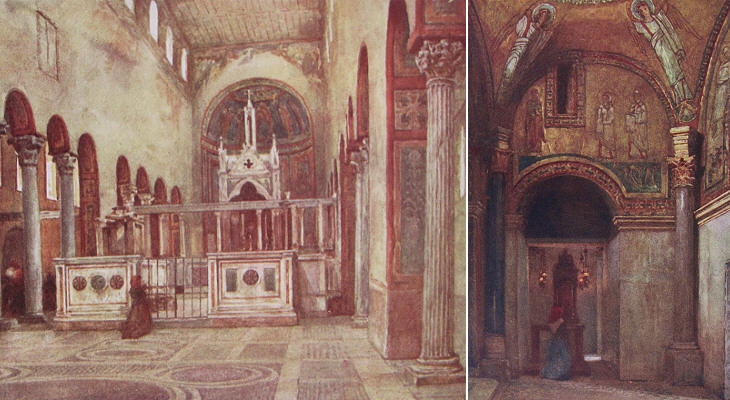 The attention of Pisa focused on the most ancient churches of Rome and especially on those which for being outside the centre of Papal Rome had been less affected by later modifications and refurbishments.
S. Maria in Cosmedin, with its Cosmati pavement and without chapels crammed with paintings and statues, offered Pisa the opportunity to show an interior which reminded the viewer of the simplicity of Northern Europe churches. By portraying a lonely woman in prayer he suggested that direct relationship between the believer and God which his readers were likely to appreciate.
The golden mosaics of Cappella di S. Zenone were evocative of Byzantine Constantinople, a city which was very much in fashion in the early XXth century and which was seen as a very exotic location: this may explain why they were selected by Pisa. 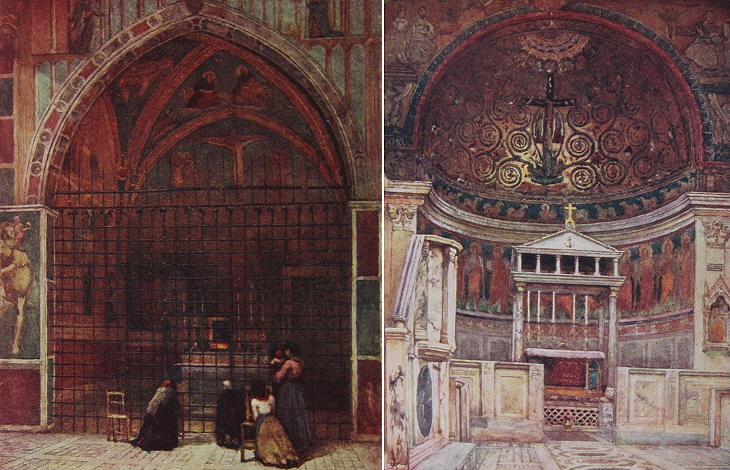 S. Clemente is a church which truly offers works of art of all periods, including IIIrd century paintings portraying Mithraic rites. Pisa selected Cappella del Paradiso, with paintings by Masolino and Masaccio, and the apse with its fine mosaics. 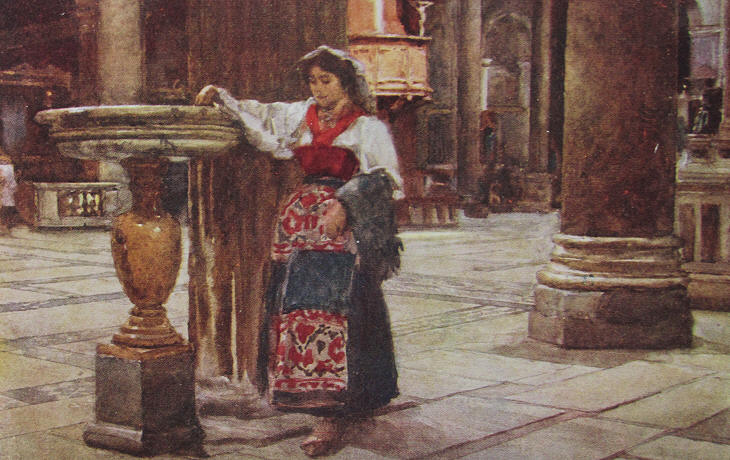 Interior of S. Maria in Aracoeli

Are Romans more devout because of the religious role of their city? In general travellers, writers and historians came to the conclusion that no, they are not more devout: they rather found Romans to be cynical in their participation to religious ceremonies. However the people of the Campagna, the Roman countryside, were thought to be more sincere in their behaviour. Pisa chose to portray a young peasant in her Sunday dress in the empty interior of S. Maria in Aracoeli. The painting calls the attention of the viewer to the stone below the column: the church was built making use of columns coming from different Roman buildings and it was necessary to adjust them to the same height either by cutting their edges or by putting a stone below them. 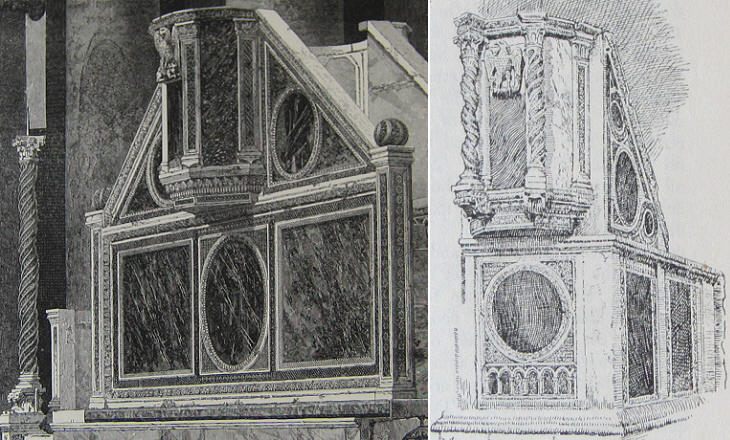 Ambos in S. Lorenzo fuori le Mura and in S. Maria in Aracoeli

The interest for the works of the Cosmati was not limited to Pisa. Other illustrators of books on Rome showed ambos decorated by the Cosmati. 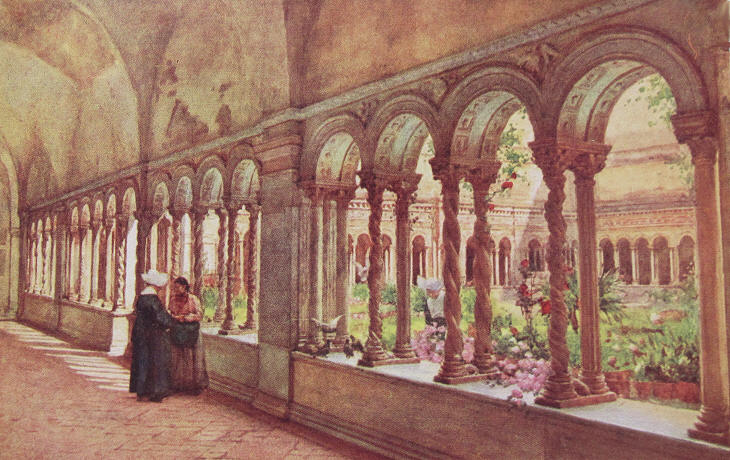 Pisa was prepared to make use of his artist's licence to portray a moving scene: in the beautiful cloister of S. Paolo fuori le Mura a nun is comforting a young woman while another nun is doing some gardening. It is a pretty scene but unlikely to have actually occurred. S. Paolo is run by friars and obviously while nuns can surely visit the cloister it is hard to believe there would not be a friar around. 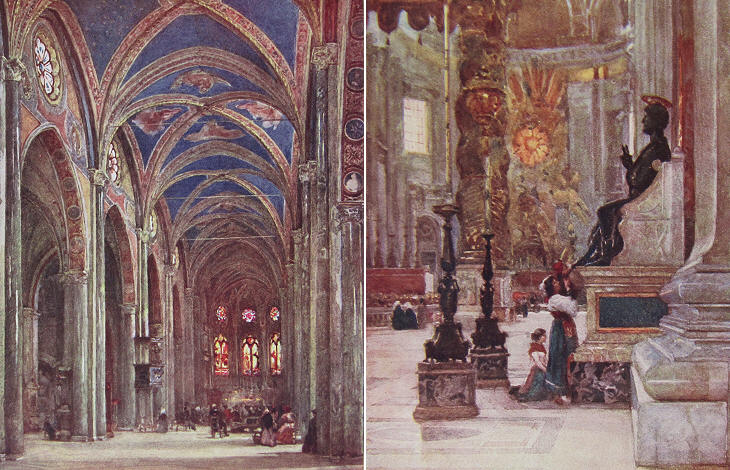 Interiors of S. Maria sopra Minerva and of S. Pietro

S. Maria sopra Minerva is the only Gothic church of Rome and this explains why Pisa chose to show it to the readers of his book.
You cannot say you have been in Rome unless you have seen at least Colosseo and S. Pietro: this is true today for those who are on a cruise in the Mediterranean Sea and land in Civitavecchia for a half a day excursion to Rome and it was true as well for 1905 armchair travellers: this explains why Pisa painted a view of the interior of S. Pietro, letting his readers catch a glimpse of that Baroque art they were assumed to abhor so much.
One of the women in prayer is shown while she is touching the foot of the bronze statue of St. Peter: a gesture repeated by millions of pilgrims (by the way there are copies of this statue around the world: in London in the Brompton Oratory, in Paris in Notre Dame des Victoires).