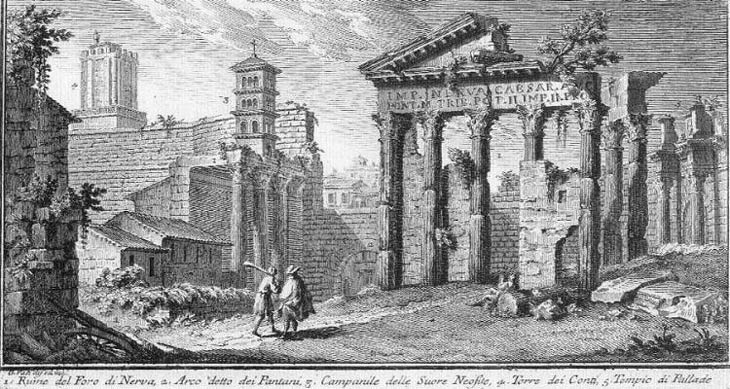 The reader of Giuseppe Vasi's 1758 book covering the nunneries of Rome was no doubt surprised to see this unusual plate which did not seem related to the subject of the book. Vasi however sold his views of the monuments of Rome also as an individual item and he knew that images of ancient temples were highly appreciated by foreign travellers. 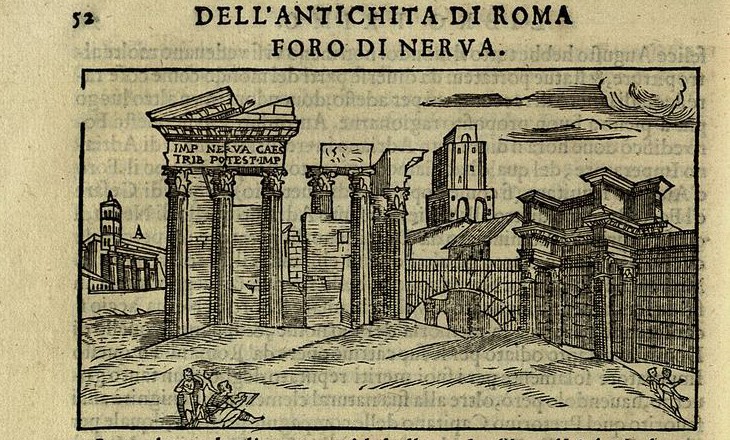 The right side of Vasi's plate shows the ruins of the Forum built by Emperor Nerva as they were depicted by Bernardo Gamucci in Le Antichità della Città di Roma, a book which was published in 1565. The temple with the inscription was dedicated to Minerva and it was pulled down in 1612 by Pope Paul V to use its columns for Acqua Paola, the large fountain he built on the Janiculum. In 1761 Vasi used another drawing by Gamucci for his view of the lost ancient ruins in Giardino Colonnese.
The left side of Vasi's plate shows S. Maria Annunziata, a nunnery which was nested inside the ancient walls of Foro di Augusto, as it was in 1758. The view of the nunnery was taken from the green dot in the 1748 map below. In the description below the plate Vasi made reference to: 1) Ruins of Foro di Nerva (more correctly Foro di Augusto); 2) Arco dei Pantani; 3) Bell tower of S. Maria Annunziata; 4) Torre dei Conti (aka delle Milizie); 5) Tempio di Pallade, actually Foro di Nerva or Transitorio. The map shows also 6) (another) Torre dei Conti; 7) SS. Quirico e Giuditta; 8) Casa dei Cavalieri di Rodi. 2) and 5) are shown in other plates. 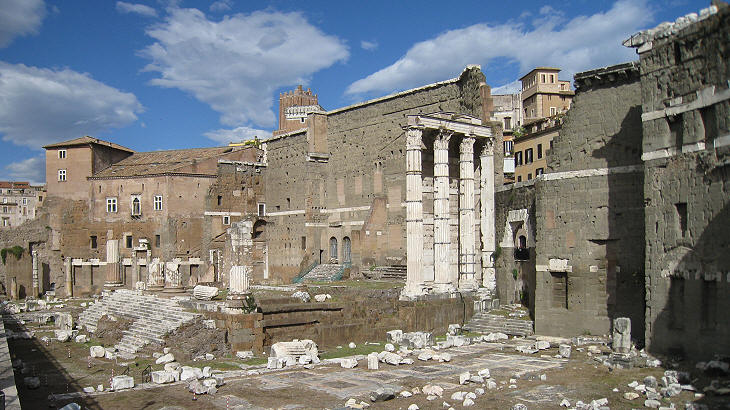 The nunnery, the church and the bell tower were all pulled down in the 1930s to completely unearth the Forum built by Emperor Augustus; some signs of their shapes can still be seen on the high peperino wall closing the northern side of the Forum. Northern wall of the Forum

The gigantic wall was built for purely aesthetic reasons; the neighbourhood to the north of the Forum was the infamous Subura (in Italian linguaggio da Suburra means foul language); the wall concealed its view to those who reached the Forum from its main entrance (i.e. from Foro di Cesare). The Forum had a northern entrance through Arco dei Pantani (swamps), a medieval name given to the arch because the area was not properly drained and therefore it was often covered with mud. 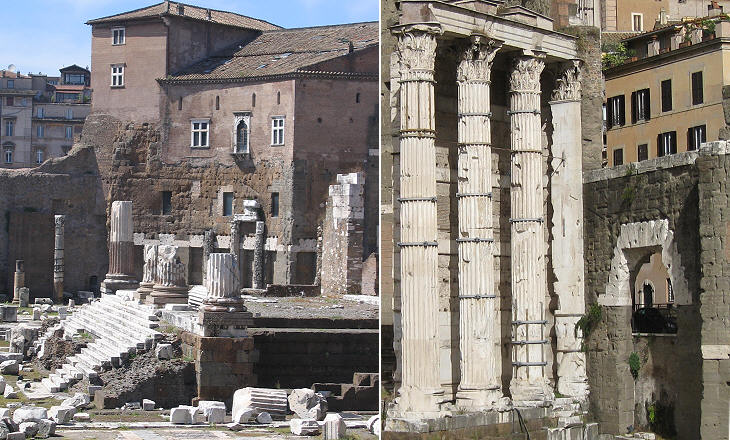 Augustus followed the example of Caesar, and in continuation of the two forums built a third one, still more magnificent, named the forum Augustum, or else the forum Martis from the temple of Mars the Avenger, which stood in the middle of it. The reason given by Augustus himself for this work was the absolute insufficiency of the two previous forums for the transaction of business and the administration of justice. No words could describe the beauty of this architectural chef-d'oeuvre, the remains of which, known by the modern name of the Arco de' Pantani, rank among the very finest of ancient Rome.
Rodolfo Lanciani - Ancient Rome in the light of recent discoveries - 1892

The Temple to Mars Ultor was the main building of the Forum built by Emperor Augustus: Ultor means the Avenger and it is a reference to the 42 BC Battle of Philippi; Brutus and Cassius, the killers of Julius Caesar were defeated by Antony and Octavian (Augustus) and they both committed suicide. The three remaining columns on the right side of the temple give an idea of its overall appearance and until the 1930s they were its only visible part. The temple was flanked by two long and high porticoes each of which had an exedra, a semicircular building. 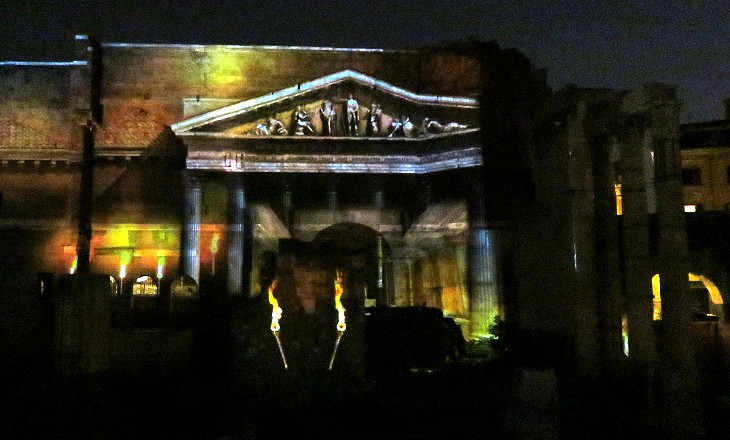 Projections of images of the reconstructed temple on its remaining walls

Since 2015 it is possible to better understand how the Forum and the Temple looked like at the time of Augustus thanks to visual reconstructions which are projected on the northern wall. The temple had eight columns on the front and eight columns on the sides. The cella was unusually large and on special occasions, the Senators met there. The central part of the tympanum was decorated with a statue of Mars between Venus and Fortuna. 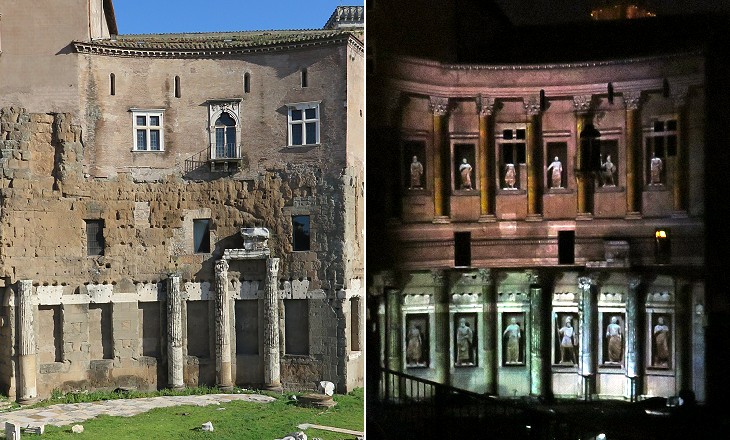 The most notable feature of the place was a gallery of statues. Lanciani
The spaces between two columns of the portico and the niches of the exedra housed gilded bronze or marble statues of summi viri (illustrious men). From literary sources we know that the western exedra housed statues of Aeneas, his father, his son and the kings of Alba Longa; the eastern exedra had statues of Romulus and of heroes of the Republican period. A gigantic lost statue of Emperor Augustus stood at the end of the western portico (other images of the Forum can be seen in the historical section). The design of the Forum had an influence on that of public buildings in provincial towns, e.g. at Merida. 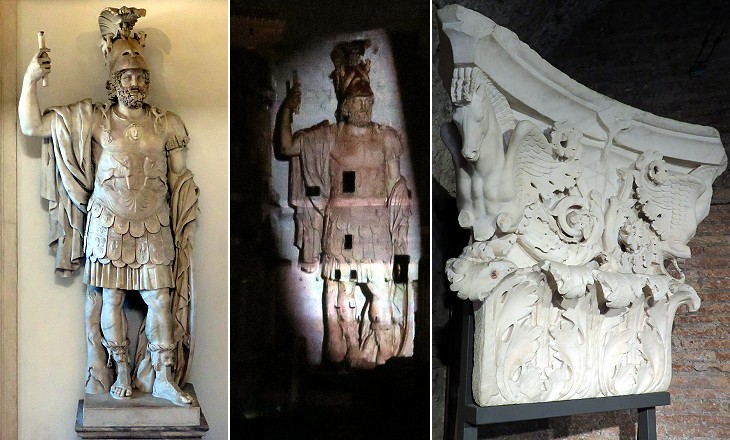 (left/centre) The statue of Mars at Musei Capitolini and its projection on the wall (you may wish to see a relief from Carthage portraying the god between Venus and Julius Caesar); (right) Exhibits at Mercati di Traiano: capital of a pilaster of the temple

In Nerva's forum, there was another gallery of portrait-statues. (..) One only has come down to us, the so-called Pyrrhus (..) and noticeable for the really shameful way in which it was restored, altered, and disfigured at the beginning of the last century. Lanciani
In the XVIth century a colossal statue was found in Foro di Nerva. For a long time it was believed to portray Pyrrhus, King of Epirus and Palazzo (Massimi) di Pirro was so named because it housed the statue for some time. It is now believed to be a IInd century larger copy of the statue of Mars inside the temple dedicated to him.
The columns inside the temple had unusual capitals depicting Pegasus, a mythical winged horse. It might have symbolized the power of Augustus, his ability to overcome all earthly obstacles. 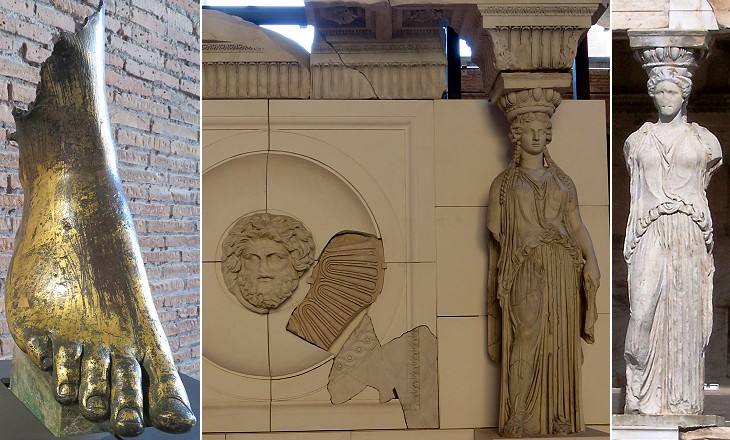 Exhibits at Mercati di Traiano from Foro di Augusto: (left) right foot of a gilded bronze statue of Victory; (right) decoration of the portico which was based on heads of Jupiter Ammon, a combination of Jupiter and Amun, an Egyptian deity (Augustus conquered Egypt in 30 BC) and on caryatids, copies of those in the Porch of the Caryatids in Athens (image at the end of the strip)

The Emperor included the Forum and the Temple among his chief achievements in Index Rerum Gestarum: In privato solo Martis Ultoris templum [f]orumque Augustum [ex ma]n[i]biis feci. (I built the Temple to Mars Ultor on private ground and the Forum of Augustus from war-spoils). 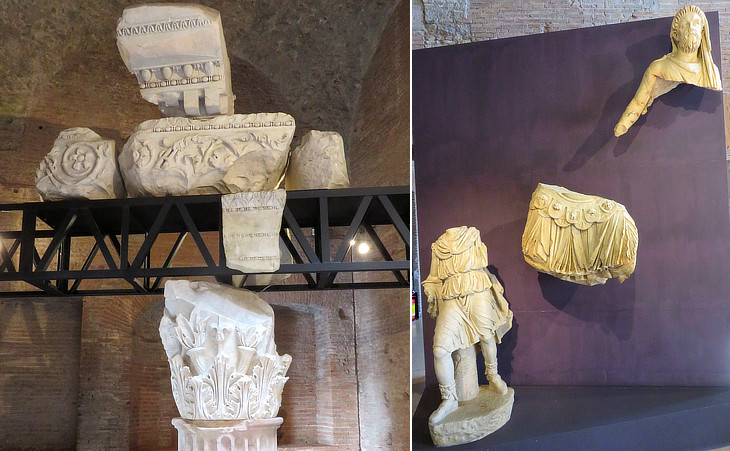 Exhibits at Mercati di Traiano from Foro di Augusto: (left) reconstruction of the architectural elements of the portico; (right) fragments of statues of Aeneas (centre) with Ascanius (left) and Anchises (right) (see the same group of statues by Gian Lorenzo Bernini) 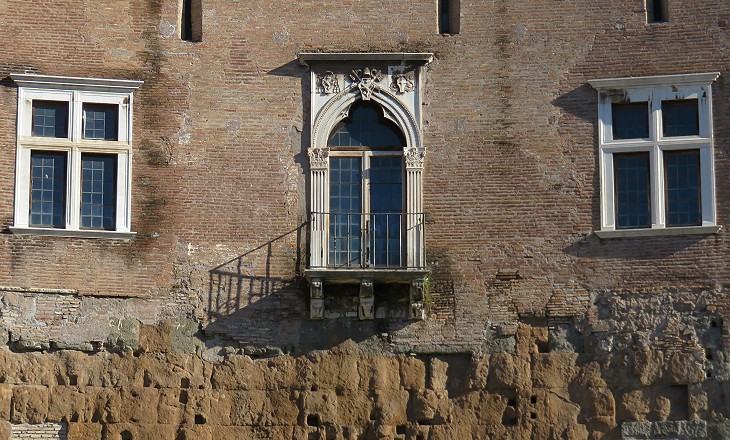 In the second half of the XVth century the western structures of the Forum were used by the Order of the Knights of Rhodes to build upon them the Roman residence of its representatives; the palace had its entrance in the street behind the Forum; the fine balcony is decorated with the coats of arms of Pope Paul II, of his relative Cardinal Marco Barbo and of the Order. 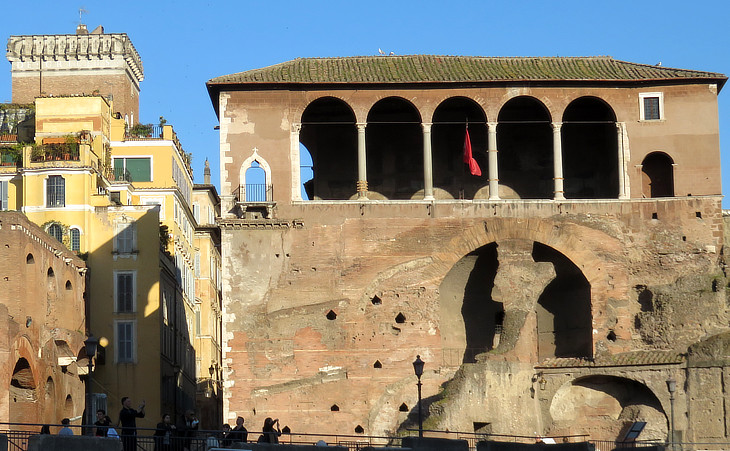 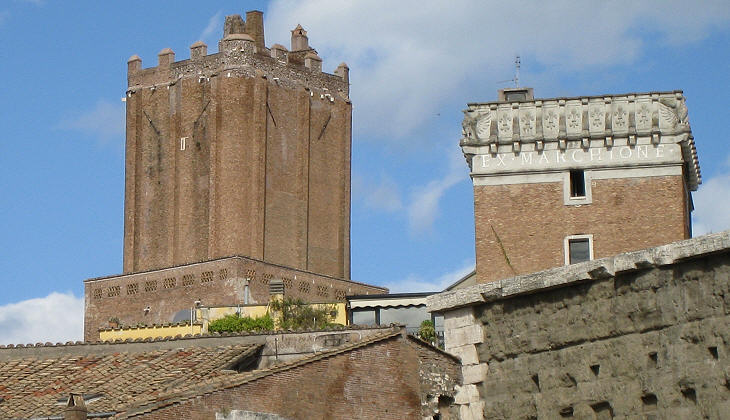 Torre delle Milizie (left and in the image used as background for this page) and the tower of Palazzo del Marchese del Grillo (right); see the whole tower behind S. Caterina a Magnanapoli

The medieval tower which Vasi calls Torre de' Conti was best known as Torre delle Milizie (according to Vasi because the troops of Emperor Trajan were garrisoned there), the name it had before it was bought by the Conti family in the XVIth century; this to distinguish it from another Torre de' Conti at the eastern end of Foro di Nerva. The unusual shape of the tower makes it identifiable in a fresco by Cimabue in S. Francesco (Upper Church) at Assisi (click here to see it in another window). It was taller than it is today and it did not lean (this was an unwanted effect of the 1870s opening of Via Nazionale). 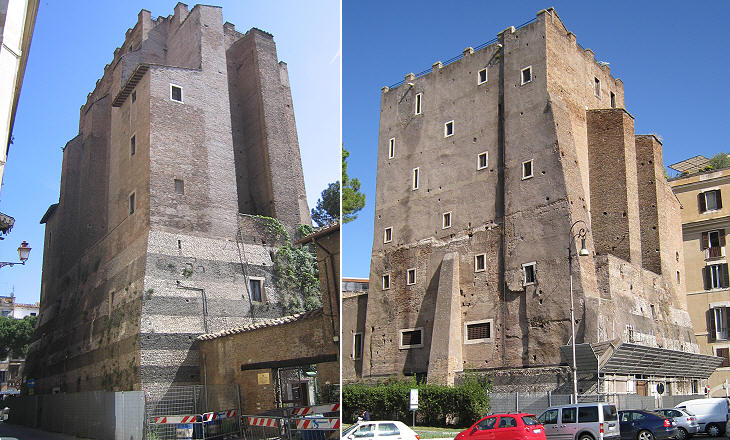 The full name of the Conti was Conti di Segni; the family acquired importance in 1198 when Lotario di Segni became Pope Innocent III; during his pontificate the Conti built a very high tower on the ruins of a Roman temple; the upper part of the tower collapsed in 1349 because of an earthquake; the poet Francesco Petrarca wrote about the event in his letters (Book XI - VII): Turris illa toto orbe unica, quae comitum dicebatur, ingentibus ruinis laxata dissolvitur, et nunc, velut trunca capit, superbi verticis honorem solo effusum despicit (That famous tower called the Torre dei Conti, unique in the world, was rent by enormous cracks, and fell apart; and now, with its summit lopped off, it looks down and beholds strewn upon the ground the glory of its proud head. - Translation by Mario Emilio Cosenza). 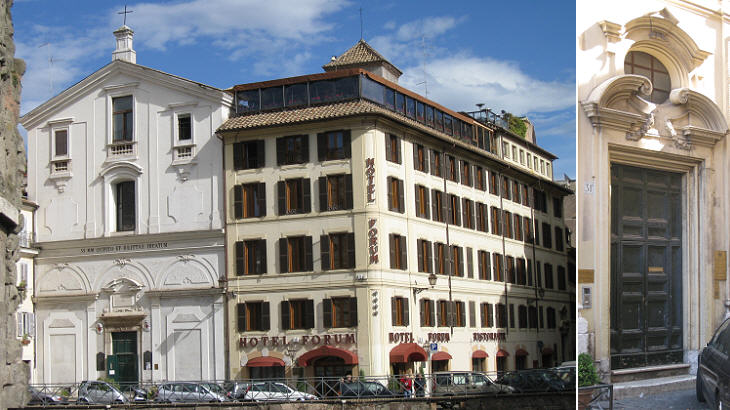 During the 1930s many churches in this area were pulled down because of the opening of Via dei Fori Imperiali. SS. Quirico e Giuditta is just outside Foro di Augusto, so it was not affected by the initiative and it gives an idea of the size and appearance of some of the lost churches. You may wish to peer inside the church to see a dramatic painting portraying the martyrdom of the two saints.
The monastery adjoining the church was designed in 1750-1753 by Gabriele Valvassori. It was turned into a hotel in the XXth century: the roof garden enjoys a spectacular view over the Fora, but it hides that of the bell tower. 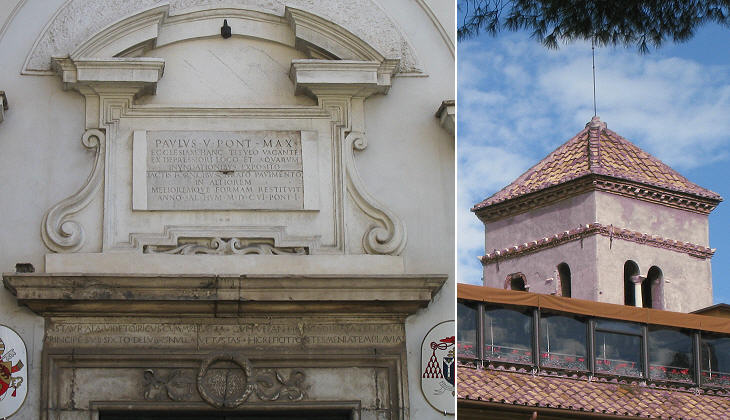 The church is very old, but because the area was often flooded, it was rebuilt several times and the level of its floor was raised; at the end of the XVIth century its orientation was changed and the apse was turned into a façade which was redesigned in the XVIIIth century (you may wish to see the church as it appeared in a 1588 Guide to Rome).
The inscriptions above the portal celebrate two restorations: by Pope Sixtus IV (below) and by Pope Paul V (above). The former is rather unusual and it is attributed to the humanist Lippo Brandolini: Instaurata videt Quiricus cum matre Iudita que fuerant longa diruta templa die / principe sub Sixto delubris nulla vetustas hic reficit pontes menia templa vias (Quirico together with his mother Giuditta now sees restored the temple abandoned for a long time. 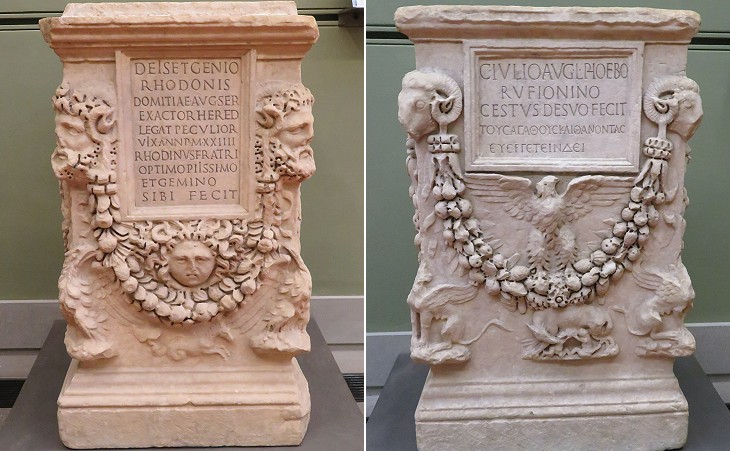 Florence - Galleria degli Uffizi: (left) funerary altar which was located in the premises of the church until it was acquired by Florentine Cardinal Niccolò Gaddi in ca 1550; it is dedicated to a slave of Domizia, wife of Emperor Domitian, who was in charge of the administration of some of her properties; (right) a very similar funerary altar which also was bought by Cardinal Gaddi; it is dedicated to a freedman and in its lower part it shows Romulus and Remus milked by the she-wolf