- Merida: Introduction and City Centre
(left - Mosaic at Italica; right - decoration at the Alcazar of Seville) 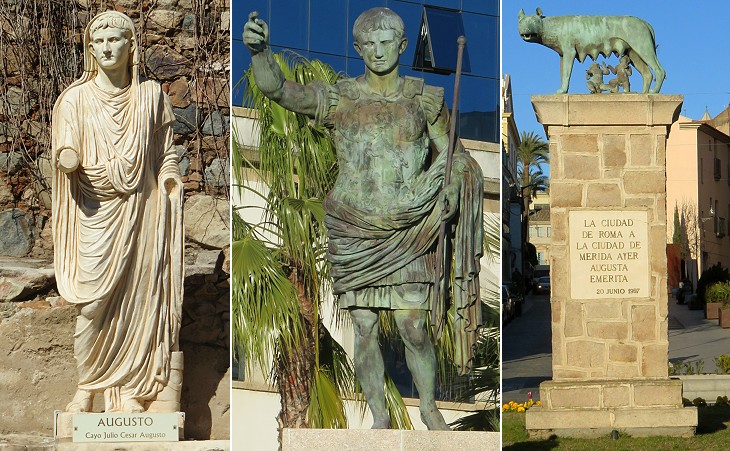 (left) Copy of a statue of Emperor Augustus as Pontifex Maximus which was found in Rome; it stands in the archaeological area near the theatre ; (centre) bronze copy of Augustus of Prima Porta near the Alcazaba (fortress); (right) copy of the She-Wolf of Rome near the Alcazaba

A place of note is Merida, the capital city of the province of Estremadura, built on the banks of the Guadiana, over which there is a most noble bridge, the work of that great Emperor, as well as Builder, Trajan. There are here still to be seen many fine remains of Roman antiquity. (..) The walls for the most part are Roman; there are some remains of an Amphitheatre, Aqueduct, Circus, etc. all Roman. It was built by Augustus, given by him to veteran troops, and called Emerita Augusta, whence corruptly Merida.
Rev. Edward Clarke - Letters Concerning the Spanish Nation - 1763 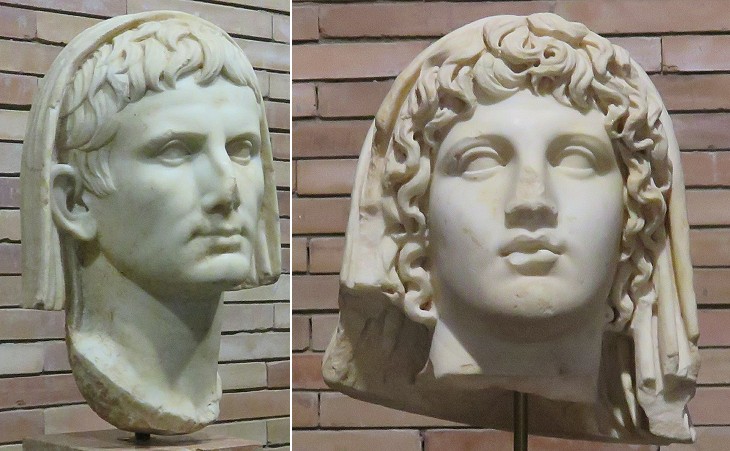 Merida is the Rome of Spain in respect of stupendous monuments of antiquity - at every step we tread on some vestige of the past. Emerita Augusta was built by the Legate Publius Carisius, in the year 25 B.C. Augustus here settled the veteran Emeriti of the 5th and 10th Legions, who had served in Cantabria. The city became the capital of Lusitania. Its splendour, as existing down to the 4th century, is described by Prudentius (Peris, iii. 3, 186), in his hymn on the death of the patroness Eulalia: ("Far in the west lies Merida (..) a city, great and populous, but greater through the blood of martyrdom (..) that famous town by which the notable river Ana passes, washing the handsome walls as it sweeps along with its green waters"). (..) Merida has been strangely neglected by our artists, architects, and authors, who too often only go over and over again the same beaten track.
Richard Ford - A Handbook for Travellers in Spain - 1855 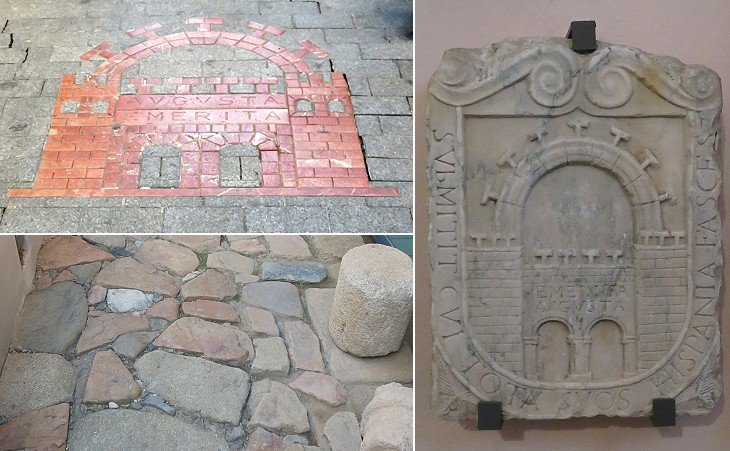 (left-above) Symbol of Merida at Cruce de Calles (crossroads), the junction between Decumanus Maximus and Cardo Maximus, the two main streets of the Roman town; (left-below) a section of Decumanus Maximus; (right) Visigothic Museum of Merida: coat of arms of the town with a quotation from Ausonius - The Order of Famous Cities: "Submittit cui tota suos Hispania fasces" (perhaps meaning that the relics of the war in Cantabria were placed in this town)

Thirty-six different coins were struck here. The common reverse is a turreted gate, with the words "Augusta Emerita" which constitute the city arms. (..) In vain did Florida Blanca (Prime Minister in 1777-1792) employ a Portuguese, one Manuel Villena, to excavate the town: the thing dropped, and nothing was done, for Charles III, although the excavator of Pompeii, when king of Spain, caught the apathetic influence of the climate. (..) There is perhaps but a day's work here for ordinary tourists, but antiquarians and architects may halt much longer. Ford
The centre of modern Medina stands exactly above that of the old town; almost every time an old building is pulled down and the site is excavated for laying the foundations of a new one, archaeologists are called in to check the importance of the ancient remains which have been discovered. In some instances, e.g. at Moreria, an archaeological area is created under the new building; in other cases large windows are opened at the street level to allow passers-by to see fragments of mosaics and frescoes of Roman houses. Today there are more than thirty archaeological sites in the town or in its immediate proximity.

The arch of Santiago, of vast size, 44 ft. high, built in the town by Trajan is now a mere shell, having been stripped of its marble casing. Ford
The arch was most likely built at the time of Emperor Tiberius as a monumental entrance to the Provincial Forum, i.e. the forum which housed tribunals and other public buildings which were related to the role of Merida as the capital of Lusitania, a province created by Emperor Augustus. Also Cordoba and Tarragona, the capitals of the other two Roman provinces in the Iberian peninsula had provincial forums. In the past the arch was named after a nearby hermitage dedicated to Santiago (St. James the Apostle). 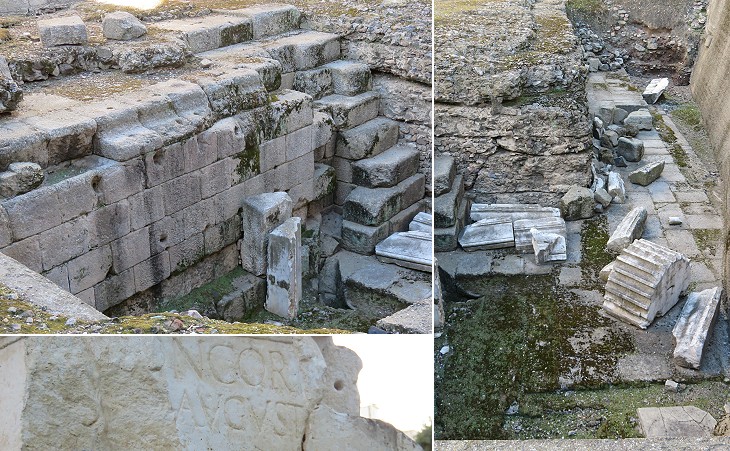 (left-above and right) Views of the Provincial Forum showing evidence of the podium of a temple; (left-below) inscription "CONCORD(IAE) AUGUSTI" which was found in this area and was utilized for the Obelisk of Santa Eulalia

Excavations near the Arch of Trajan in 1983 led to the identification of the podium of a temple. It was most likely built at the time of Emperor Tiberius in ca 30 AD and it was very similar to the almost entirely lost temple by the same name in the Forum of Rome. The purpose of the building was to house ceremonies aimed at stressing the loyalty of Merida to Rome and to the imperial family and to celebrate Pax Augusta, a period of peace in the last years of Augustus' rule. 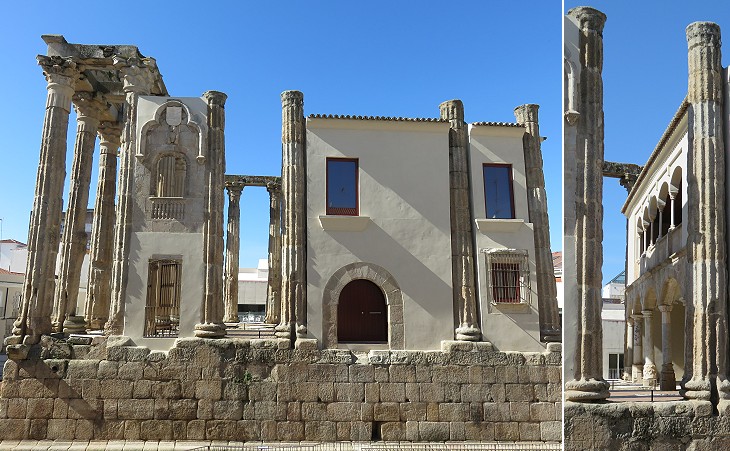 The Casa de los Corbos is constructed out of a temple dedicated to Diana: it was peripteral, with fluted granite pillars and Corinthian capitals; the interstices have been built in; the best view is from the garden. The granite of Estremadura is perishable: thus the angles are worn away like half-melted lumps of sugar, while the brick remains perfect. The modern house is also much dilapidated: thus all is going to a common ruin. The absentee lord consigns it to the neglect of an unjust steward, who occupies a few rooms, as a mean insect creeps into the untenanted shell of the larger animal. Ford 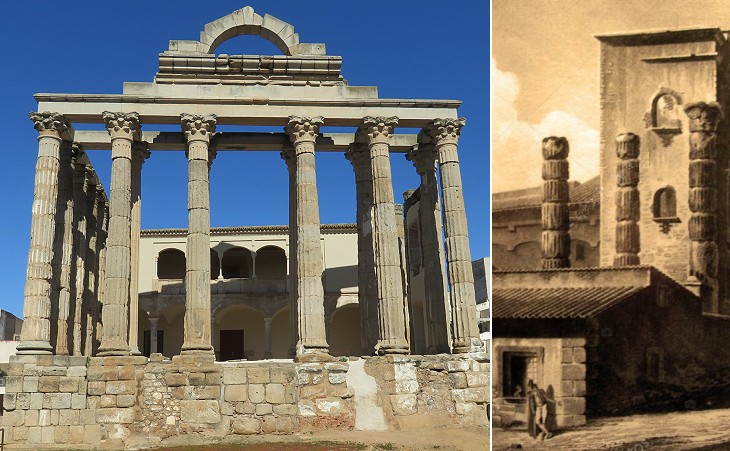 Many ancient temples have survived because they were turned into buildings having another use, not necessarily churches (e.g. Tempio di Adriano in Rome). The 1820 engraving shows the temple as it appeared to Ford without the upper part of the front and with some small buildings which impaired the view of the original structures. Palacio del Conde de los Corbos had a high tower which has been demolished. 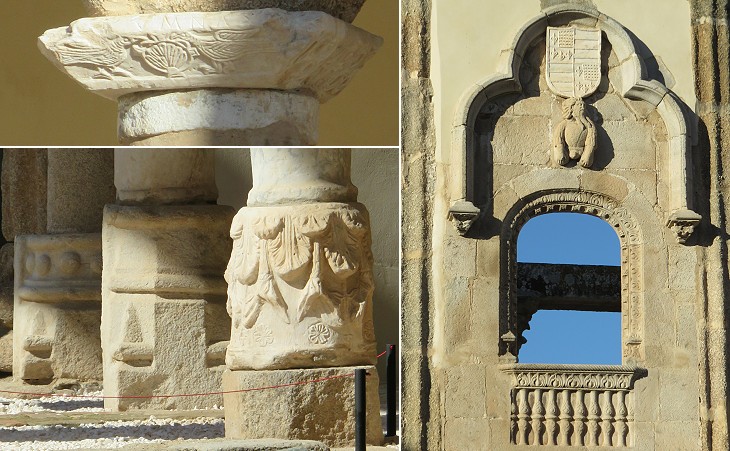 The palace was built in the XVIth century at a time when interest for the ancient monuments spread into the upper classes of the Spanish society. Some ancient columns of the temple did not have a purpose in the layout of the building, yet they were not pulled down. The palace most likely incorporated a previous medieval structure. In 1972 it was decided to entirely pull it down, but eventually authorities chose to retain some parts of the building for their artistic and historical importance. In a way this is what occurred at Tempio di Antonino e Faustina in Rome where some of the XVIIth century additions were not removed. 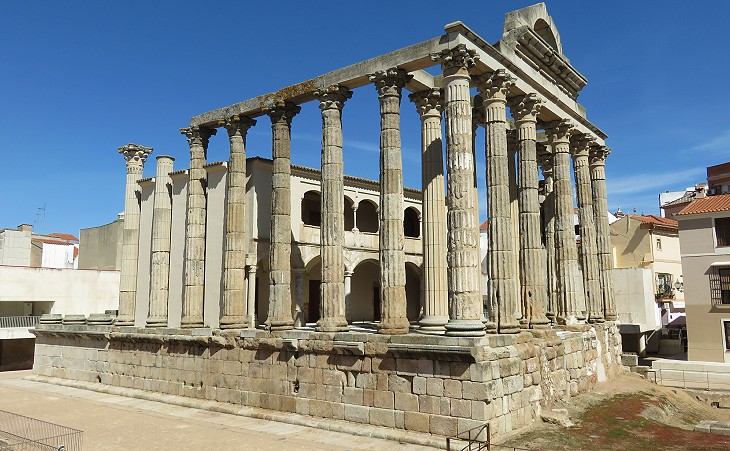 The temple was built very near the junction between the two main streets soon after the foundation of the town. Its traditional dedication to Diana is not based on sound evidence and today archaeologists support the opinion that it was dedicated to Rome and Augustus, as those at Athens and Ancyra (Ankara). 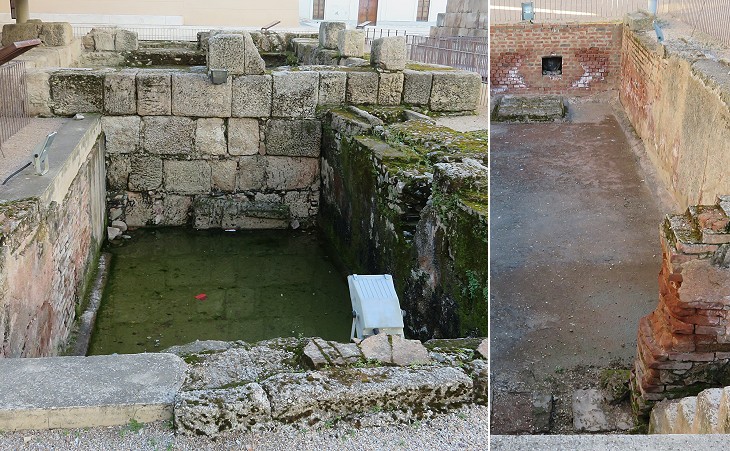 Roman facilities near the Temple to Diana

The temple stood at the centre of a large square which was part of the Municipal Forum. Archaeologists have found evidence of a podium for making public announcements and of two fountains. A temple to Mars stood in the proximity of that to Diana; some of its decorations were utilized for a church dedicated to Saint Eulalia. Portico of the Municipal Forum

The Forum was near the convent of Descalzos; the area and some shafts of columns only remain, for this huge convent was erected at the expense of antique remains. Ford
Roman forums had large open squares, but also porticoes where citizens could find shade in summer or shelter from rain in winter. A monumental portico stood at a short distance from the Temple to Diana. Its design was inspired by the exedrae of Foro di Augusto in Rome and its decoration, in particular the reliefs depicting heads of Jupiter Ammon, was similar to that of the Roman monument. 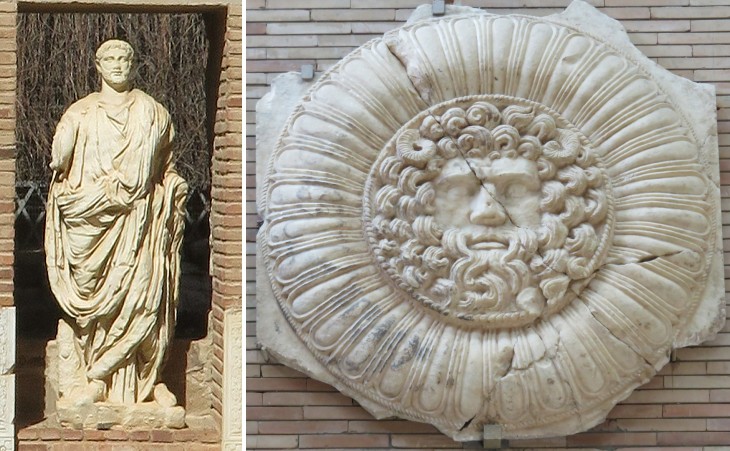 The image used as background for this page shows a detail of a statue from this forum, now at Museo Nacional de Arte Romano; it depicts the "mane" on the head of a bull.

Move to Bridges, Aqueducts and Baths, Theatre, Amphitheatre and Circus, Other Roman Monuments and Exhibits from the Museums or Visigothic and Moorish Merida.