Piazza di Pietra (stone), the name of the square, refers to the imposing columns of a temple to Emperor Hadrian built in 144 AD by his successor Antoninus Pius.
In 1696, during the pontificate of Pope Innocent XII, the surviving part of the temple was incorporated into a large building designed by Carlo Fontana to house Dogana di Terra, the central Customs Office for goods which reached Rome by land. This may explain why there is Quartiere di Soldati (a sort of police station) in the lower left corner of this 1752 etching.
The view is taken from the green dot in the 1748 map here below. In the description below the plate Vasi made reference to: 1) Colonne della Basilica di Antonino Pio, today Dogana di Terra; 2) Collegio dei Bergamaschi; 3) Quartiere di Soldati. The map shows also 4) Chiesa dei Bergamaschi; 5) Hotel Cesari; 6) Palazzo Ferrini. 4) is shown in another page. 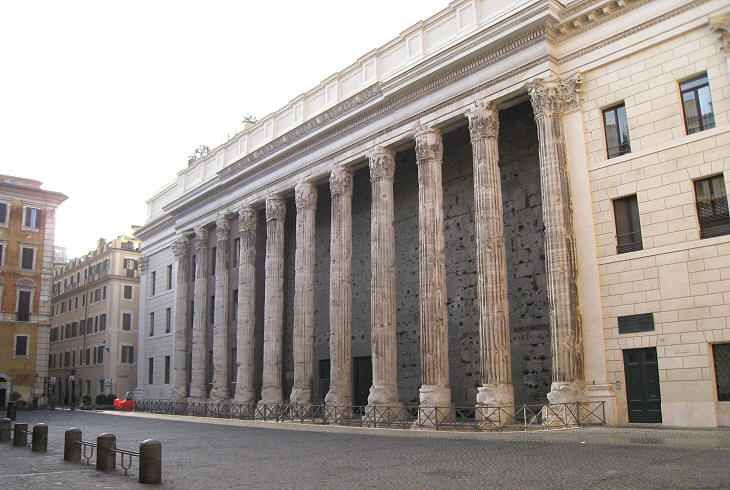 The square is very narrow and the actual view of the temple is not as frontal as in the etching. In 1879-882 the building designed by Carlo Fontana was modified and its decoration was replaced by a simpler one; in 1928 the wall of the cell was freed from later additions and excavations showed that the temple stood 4m/12ft above the ancient street level. 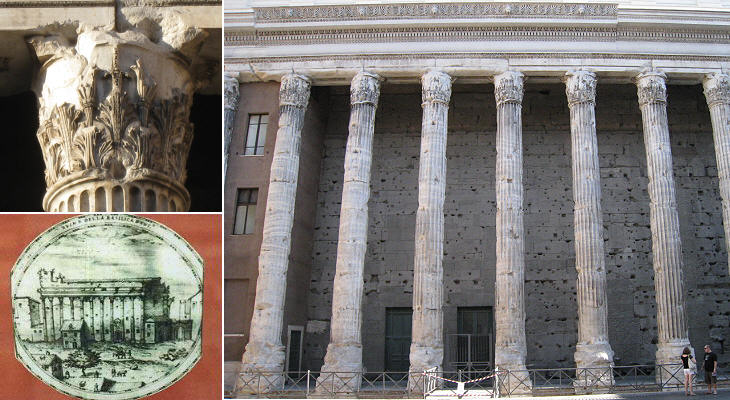 The temple completed a monumental area which Hadrian had initiated by rebuilding the Pantheon and by erecting a temple to Matidia, his mother-in-law and a niece of Emperor Trajan. Traces of this temple can be seen in Via della Spada d'Orlando, very near Piazza di Pietra. The monumental area had a grand entrance from the urban section of Via Flaminia where a triumphal arch dedicated to Hadrian was erected. Parts of its decoration were found in Piazza Sciarra (you may wish to see a relief at Musei Capitolini showing Hadrian entering Rome where he is greeted by a personification of the City). 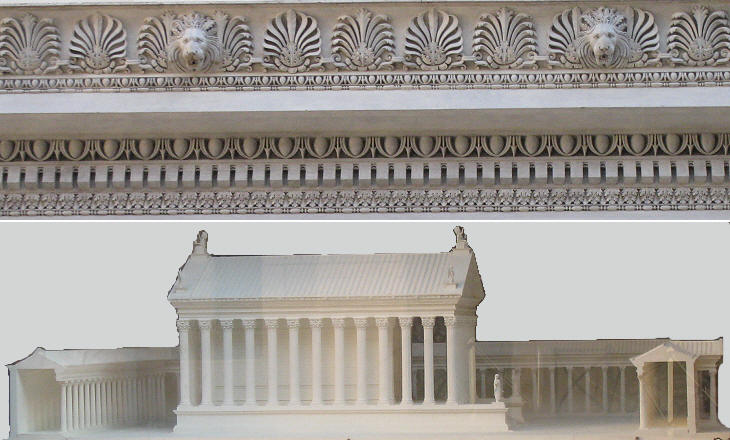 (above) Cornice with an egg-and-dart pattern which appears also in the image used as background for this page (see medieval and Baroque cornices which were designed after it); (below) reconstruction of the temple

The temple was surrounded by a portico which was decorated with large reliefs portraying personifications of the Roman Empire Provinces; this perhaps in recognition of the fact that Emperor Hadrian spent most of his life visiting them. Today the building belongs to the Roman Chamber of Commerce and the hall inside the ancient cell (it opens in another window) is used for conferences and small exhibitions. 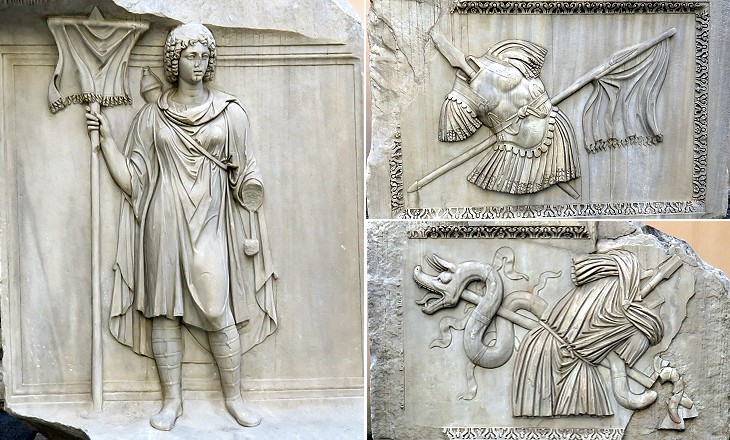 The reigns of Hadrian and Antoninus Pius were characterized by a long period of peace and therefore the decoration of the temple did not feature war events. The majority of the Provinces were portrayed with references to the crops they produced, those in military attire were most likely the provinces on the border of the Empire. 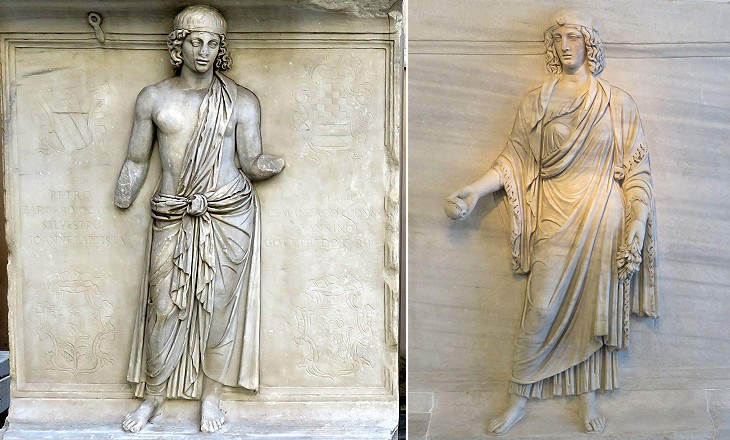 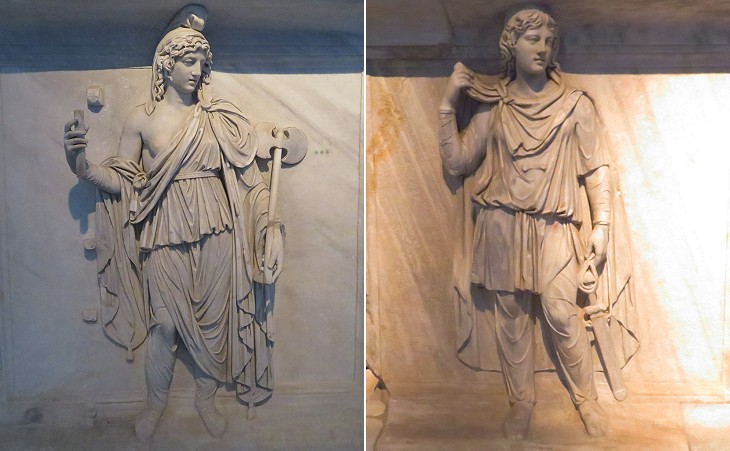 Side of Collegio dei Bergamaschi in Piazza di Pietra 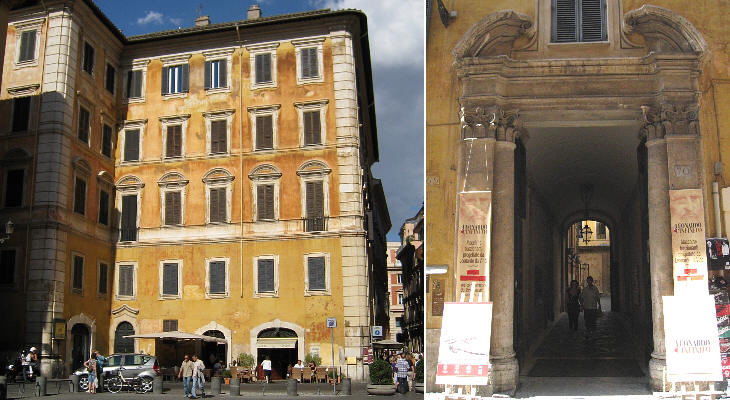 In 1729 the brotherhood of the inhabitants of Bergamo (a town near Milan) living in Rome built a large block between Piazza Colonna and Piazza di Pietra. The block housed a hospice and a college for students from Bergamo in addition to a church. It had also some flats which were rented and thus granted a substantial income to the brotherhood. Gabriele Valvassori, the architect who designed the flamboyant façade of Palazzo Pamphilj a Via del Corso, was a member of the brotherhood and he left his mark in the main portal, whereas the rest of the building has a plain decoration. 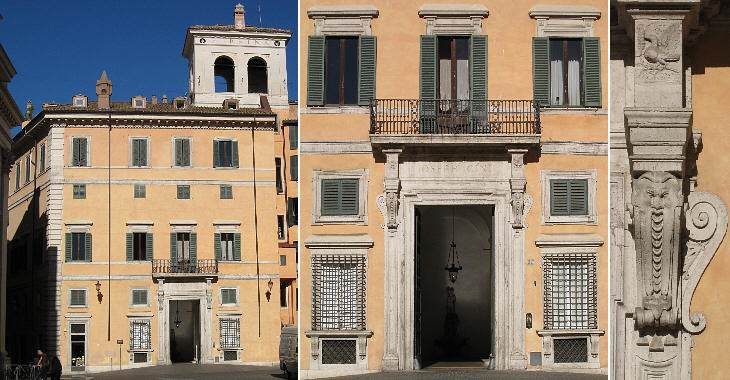 (left) Palazzo Ferrini; (centre) portal; (right) detail of the portal showing a dove and an ear of wheat, heraldic symbols of the Ferrini

The palace was designed by Onorio Longhi at the beginning of the XVIIth century. The name of the owners, the Ferrini family, is written in the elegant loggia while the inscription over the portal "IOSEPH CINI" refers to Count Giuseppe Cini who owned the palace in the XIXth century. 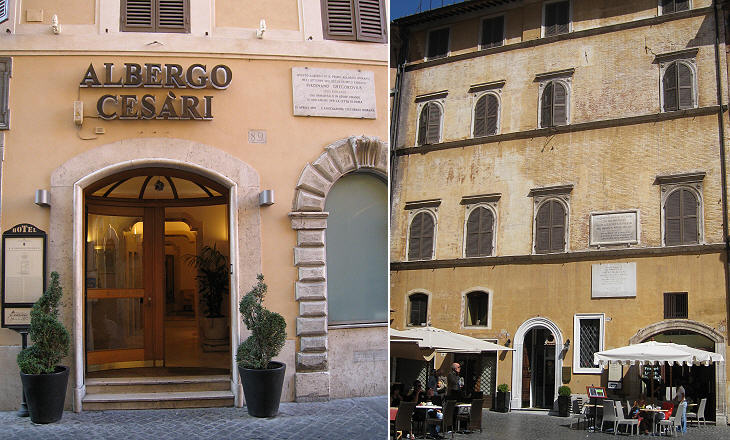 In the XIXth century foreigners had to leave their passports at the gates of Rome and they were given a special pass. With this document they had to register with the police within 48 hours. Police Headquarters were located at the main Tribunal (i.e. Palazzo di Montecitorio), which is very near Piazza di Pietra. This explains why there were many inns in Rione Colonna. One of them (Albergo Cesari) is located in Via di Pietra and it is still active: it was highly recommended in the Hachette 1853 Guide of Rome for the quality of its water supply (Acqua Vergine from Fontana di Trevi). The plaque on the wall commemorates Ferdinand Gregorovius who on October 2, 1852 spent the first night of his 22 years' stay in Rome there.
A much older inn (still active) is located in Piazza della Rotonda (not far away). It was quoted in his poems by Ludovico Ariosto who spent two months there in 1513. At the time it was called Locanda del Montone (Ram's Inn), but later on the name was changed into Albergo del Sole (Sun) (click here to learn more about the historical shops of Rome). The Renaissance part of the building is that on the right where the windows leave an empty space which was painted.