Links to this page can be found in Book 4, Map B2, Day 1, View C7, Rione Colonna and Rione Trevi. 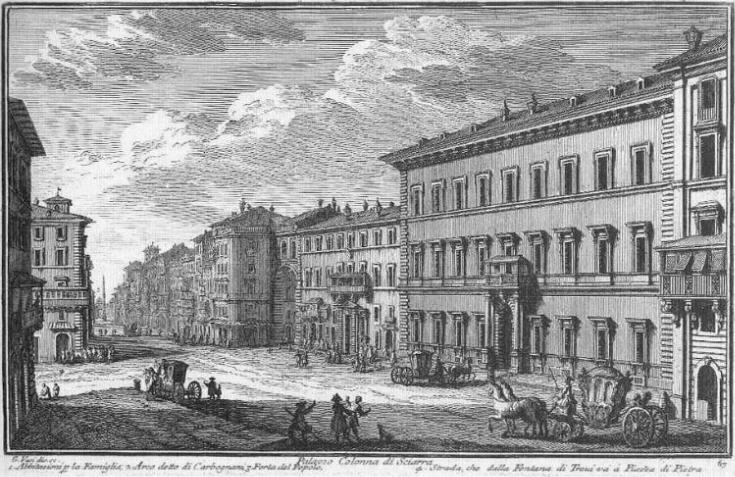 This 1754 etching by Giuseppe Vasi shows in the foreground a section of Via del Corso which at that time was regarded as a small square because it was slightly wider than the rest of the street. It was called Piazza Sciarra since all the palaces on its eastern (right) side belonged to the Sciarra, a branch of the Colonna family; the last two buildings were linked by a covered passage known as Arco di Carbognano, after the name of a fiefdom of the Sciarra. The etching shows also Via del Corso from Piazza Sciarra to its northern end at Piazza del Popolo.
The view is taken from the green dot in the small 1748 map here below. In the description below the plate Vasi made reference to: 1) Palazzo Sciarra "per la famiglia" (people working for the Sciarra either as servants or in the administration of the family properties); 2) Arco di Carbognano; 3) Piazza del Popolo; 4) Street linking Piazza di Pietra with Fontana di Trevi. 3) is shown in another page. The small map shows: 1) Palazzo Sciarra "per la famiglia"; 2) Arco di Carbognano; 3) Palazzo Sciarra (the main building); 4) Street linking Piazza di Pietra with Fontana di Trevi; 5) Palazzo Bonaccorsi; 6) S. Maria Maddalena delle Convertite; 7) Palazzo Verospi. The dotted line in the small map delineates the borders among Rione Colonna (left half and top right quarter), Rione Pigna (small area near the green dot) and Rione Trevi (lower right quarter). 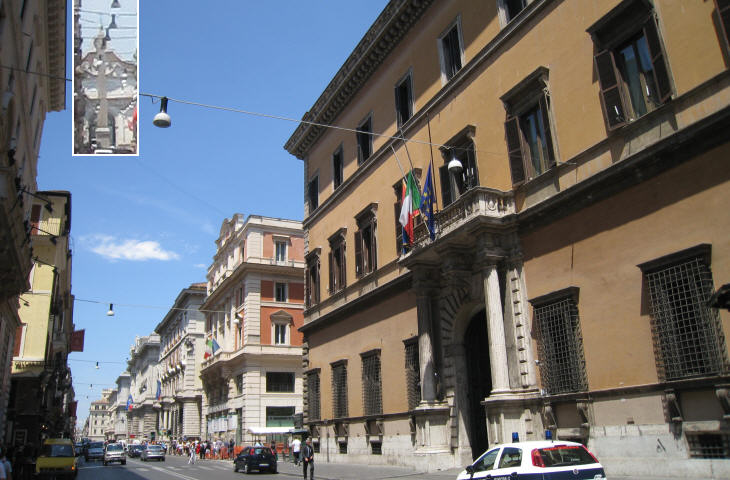 In 1883, after the 1870 annexation of Rome to the Kingdom of Italy, a new city plan envisaged the enlargement of Via del Corso from Piazza Sciarra to Via Condotti; this led to the demolition of a series of buildings on the eastern side of the street except for Palazzo Sciarra; the small adjoining palace and Arco di Carbognano were pulled down to open a new street leading to Fontana di Trevi. Eventually the enlargement did not cover the whole section of Via del Corso included in the city plan, but only that between Palazzo Sciarra and S. Maria Maddalena delle Convertite. 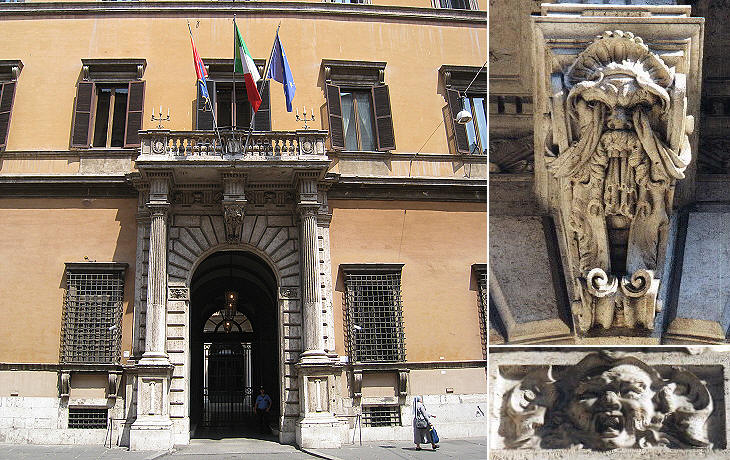 Portal and details of its decoration showing some masks

The presence of the Colonna in this neighbourhood goes back to the XIth century. Their houses were protected by towers one of which was modified over the years until it was turned into the current palace.
The Colonna split into branches which were named after their fiefdoms; the Colonna di Paliano had their residence in Palazzo Colonna, the Colonna di Carbognano in this palace, but they were better known as Colonna di Sciarra after their ancestor Giacomo "Sciarra" (Quarrelsome) Colonna who slapped Pope Boniface VIII in the face in 1303.
The fine portal was built in 1630 by Orazio Torriani: he probably followed a drawing by Antonio Labacco, an assistant to Antonio da Sangallo the Younger. 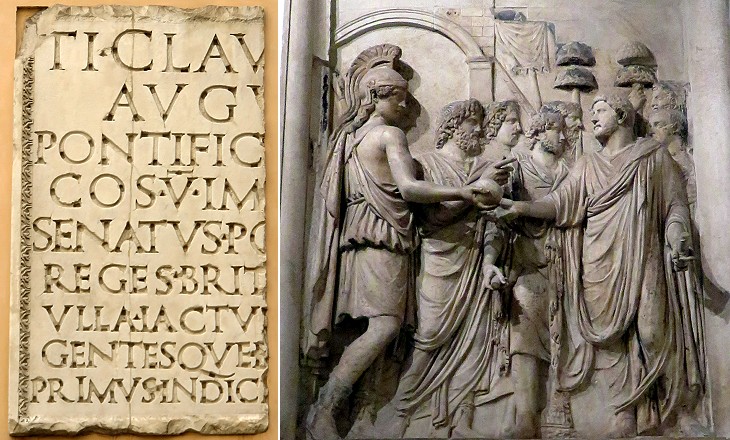 At the time of ancient Rome the aqueduct of Acqua Vergine crossed the urban section of Via Flaminia (today's Via del Corso) very near Piazza Sciarra. The arch across the street was turned into a triumphal one, similar to Arco di Druso. It was dedicated to Emperor Claudius to celebrate his conquest of Britain; fragments of reliefs and inscriptions were found at different times during the construction of buildings on both sides of Piazza Sciarra. The final part of the inscription was reconstructed as follows: He received the surrender of eleven kings of the Britons defeated without any loss, and first brought barbarian peoples across the Ocean into the dominion of the Roman people.
The large relief shows Emperor Hadrian entering Rome where he is greeted by a personification of the City, which is very similar to that in the pedestal of Colonna di Antonino Pio. The two men with a laurel wreath are personifications of the Senate (the older one) and of the People (the younger one) of Rome. Other reliefs portraying Hadrian were found at Arco di Portogallo in the northern part of Via del Corso. 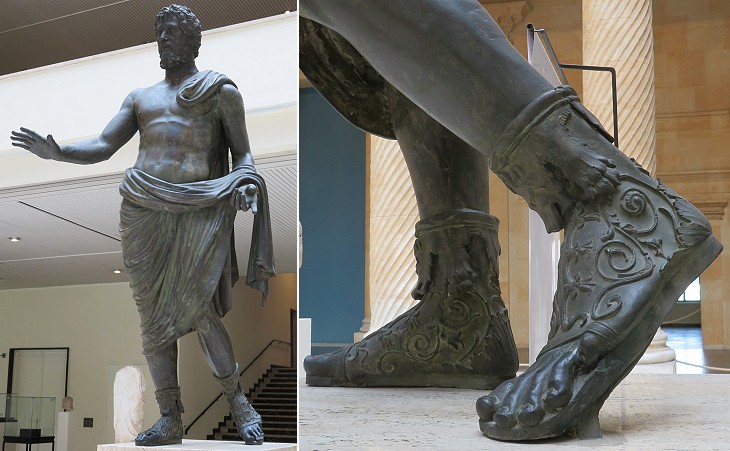 Brussels Art & History Museum: bronze statue which was found in 1643 during the construction of new walls on the Janiculum. In 1667 Paolo Naldini added the head (portraying Emperor Septimius Severus) and the right arm and most likely the fine sandals. It was part of the Sciarra Collection

The palace belonged to the Sciarra until the end of the XIXth century when Prince Maffeo went bankrupt as a result of his too many real estate investments, which included the construction of Galleria Sciarra Colonna. The Sciarra had a villa on the Janiculum. 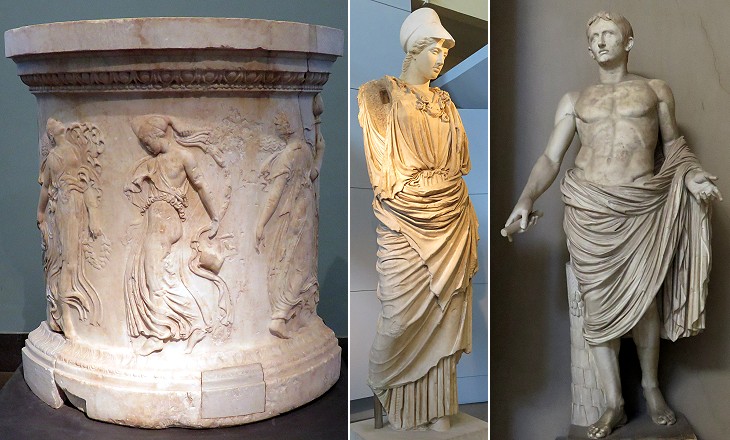 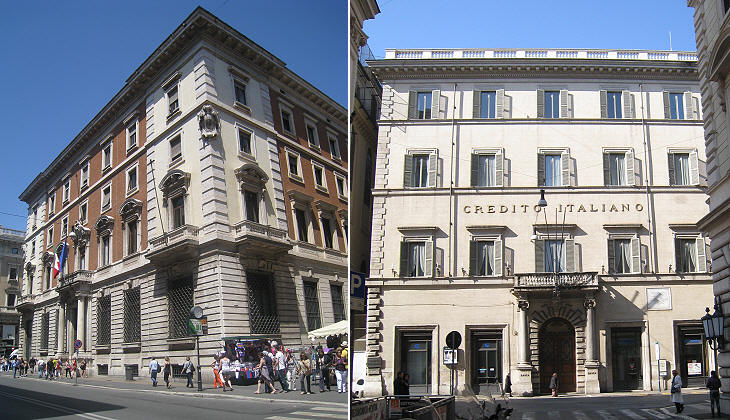 (left) Palazzo della Banca Commerciale Italiana on the site of Palazzo Bonaccorsi; (right) Palazzo Verospi (the image used as background for this page shows a detail of its capitals)

The process of demolition and reconstruction of the buildings on the eastern side of Via del Corso was a very painful one and it was completed only in 1922 with the inauguration of Galleria Colonna which replaced Palazzo Spada Piombino. Banks played a major role in this process as they competed to have their headquarters or their Roman branch along Via del Corso.
Palazzo della Banca Commerciale Italiana was designed by Luca Beltrami in 1919. Credito Italiano, another important bank, bought Palazzo Verospi; the building was not affected by the enlargement of the street because it was located on its western side (the eastern one was pulled down to make room for a department store); yet it was modified to fit the requirements of the bank: a storey was added and the ground floor windows were turned into doors, thus modifying the original design of the façade by Girolamo Rainaldi and Onorio Longhi, which was very similar to that of Palazzo Sciarra. The Convent of Penitent Whores (that none may perish in Rome who have a mind to be saved) called Sancta Maria Magdalena in Corso; where many of those poor Magdalens have led such penitential Lives, as the bloody Walls of their Cells, caused by their frequent disciplining, shewed to all Rome in a conflagration of that Monastery that Paulus Quintus himself being informed of it, would needs be carried thither, to see those Bloody Chambers from the Street, and having seen them, wept for Joy.
Richard Lassels' The Voyage of Italy, or a Compleat Journey through Italy in ca 1668
Since the XVth century many prostitutes lived and worked in the streets between Via del Corso and Piazza di Spagna; today these streets are part of the shopping district of Rome, but in the XVIIIth century they were a temptation for the foreign travellers who lived in the Strangers' Quarter (read James Boswell's 1765 account of how he could not resist temptation). The popes tolerated and even authorized prostitution, but they supported initiatives meant to redeem prostitutes; in 1520 Pope Leo X assigned a small church near Via del Corso to Compagnia della Carità per le Donne Convertite, a brotherhood which helped prostitutes who wanted to abandon their trade; in 1585 the church was rebuilt and dedicated to St. Mary Magdalene; it was damaged by fire in 1617 (you may wish to see it in a 1588 Guide to Rome). The church and the adjoining nunnery were closed in 1798; a fine painting by il Guercino depicting St. Mary Magdalene at Jesus' tomb with two angels (it opens in another window) which was in the church was moved to Musei Vaticani. The street leading from Via del Corso to Piazza S. Silvestro is still called Via delle Convertite.
Palazzo Marignoli was designed by Salvatore Bianchi and Giulio Podesti; it occupies the site of the former nunnery and church and in addition that of some other buildings; it now belongs to an insurance company.