- Paliano
(detail of a fresco at S. Onofrio)

German historian Ferdinand Gregorovius spent the summer of 1856 at Genazzano; on September 23, accompanied by a local peasant, he rode to Paliano and Anagni; he returned to Paliano in 1857 and 1859 on his way to Ferentino and Veroli. Pagliano, a town of 3700 inhabitants, is distant six miles from Genazzano. It stands on an isolated hill rising out of the plain, and is clothed with umbrageous trees and vineyards. A good road through fields of maize leads to it. The great pyramidal peak of the Serrone overshadows it to the left, and lends a certain majesty to the whole landscape. Who can paint this Latian landscape, when all its mountains glow in iridescent purple tints, and the wide valley below grows darker and darker, and night creeps slowly up from behind the broad, glowing wall of the Serra, and then seems to wipe out, one by one, with her dark hand, all the little towns that had been shining there, till they are swallowed up in gloom? The windows of Serrone sparkle in the rose red sunset rays, then Rojate; then, above there, Piglio; one after another they are extinguished. Gregorovius - translation by Dorothea Roberts
In Aus der Campagna von Rom (About the Roman Campagna), the account of his journey to Paliano, Gregorovius described Monte Scalambra, the long mountain which stands to the east of Paliano; he met a large flock of sheep which after having spent the summer on the mountain was heading towards the plain. 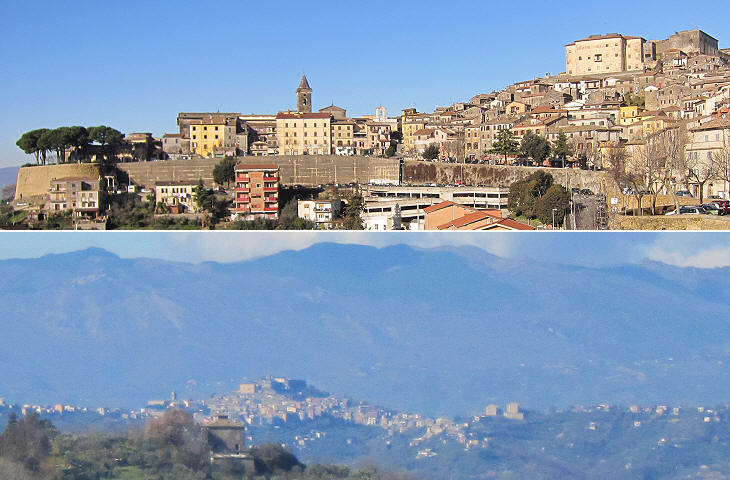 (above) View of Paliano from the south; (below) Paliano seen from Anagni

Still more charming than this road, however, is the field-path by which we rode quite easily up to it, until we had reached the last steep bit of the rocky summit itself. Here is set a small but very strong fortress, often and pertinaciously besieged in old times, more especially during those wars, or feuds, waged between the Papal See and the great family of Colonna. Standing on so high and steep a rock, Pagliano was hard to reach by means of artillery. Gregorovius
Paliano stands at the top of a hill in a central position between Monte Scalambra and the Lepini Mountains (which Gregorovius called Volsci Mountains after the Volsci, an ancient Italic people who lived there); the town is dominated by a fortress and its name is strictly associated with a branch of the Colonna family, the Dukes of Paliano, who owned (and still own) Palazzo Colonna a SS. Apostoli. 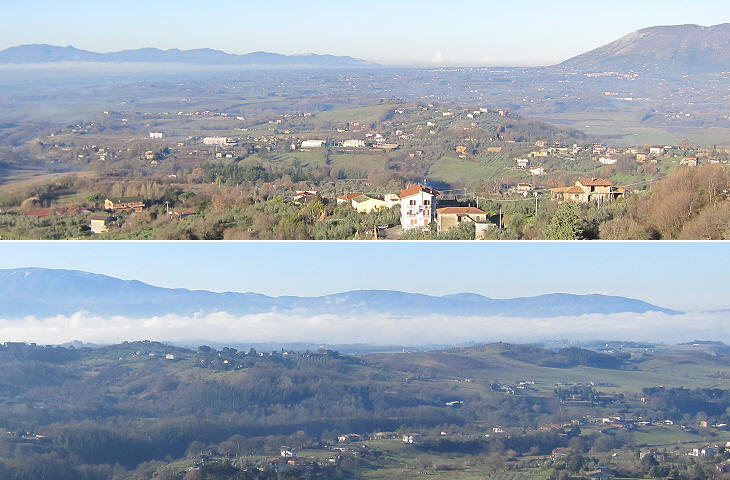 The great Colonna palace stands at the entrance to the town, on the declivity of the hill, from which a prospect spreads out before the eye of which one would never tire. Gregorovius
Gregorovius was impressed by the views he enjoyed from Paliano (and Anagni); he rated them among the finest ones of Saturnia tellus, a poetic name for Latium (and later on Italy). 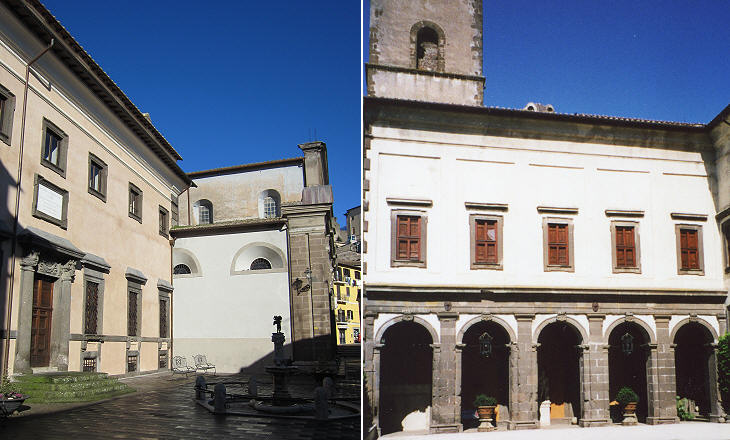 The only one palatial-looking house still existing is the great Colonna palace - Pagliano confers a title upon the principal branch of this illustrious family. It is a beautiful structure, built of dark tufa, in a symmetrical quadrangle, and although only two storeys high, it is spacious. (..) Its graceful architecture is of the seventeenth century, when the castle has evidently been restored. Gregorovius
The Colonna did not hesitate to fight against the popes to retain their possessions; in particular in 1556 they fought for Paliano against Pope Paul IV; it was a veritable war called Guerra di Campagna because it concerned the control of Campagna di Roma, the region surrounding the city; Pope Paul IV assigned Paliano to his nephew Don Giovanni Carafa whose beautiful wife, Dona Violante di Cardona, was the Duchesse de Paliano celebrated in a short novel by Stendhal. The Colonna, who had many fiefdoms in the Kingdom of Naples, at the time a Spanish possession, appealed for help to King Philip II who sent an army led by the Duke of Alba which almost conquered Rome; some of the Colonna possessions were restored to them and eventually also Paliano. 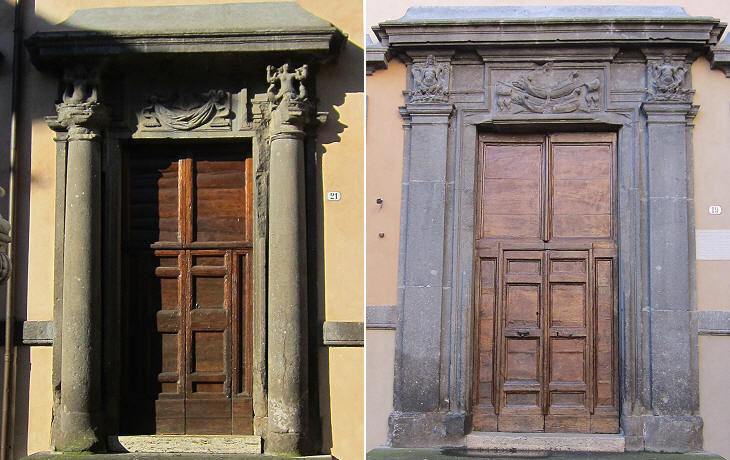 Marcantonio II Colonna, the head of the family in 1557-1584, gained fame as admiral of the papal fleet at the 1571 Battle of Lepanto during which the Ottomans were defeated by an alliance of Catholic nations; on his return to Rome he was celebrated as an ancient Roman commander and the event is remembered every year at Marino, another fiefdom of the Colonna. This explains why the family palace at Paliano was decorated with naval symbols by Antonio Del Grande, the family architect who is best known for having designed the great gallery inside Palazzo Colonna in Rome.
This castle - once so magnificent, so brilliant, so filled with eager life - is now, as are so many old palaces in Italy, silent and deserted. A surly castellan leads you through the great rooms, pointing out where fine trophies of arms, the spoils of the Colonna victories, used to hang on walls now also denuded of their pictures. These last have been either sold or removed to other places. Gregorovius
As a matter of fact the expenses incurred by Marcantonio to finance his participation in the war were so high, that his heirs had to sell many of their fiefdoms, including Palestrina, to repay the debts he incurred. 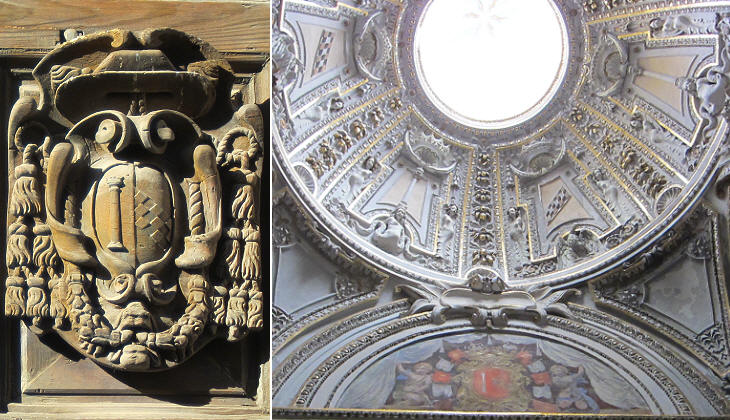 Close by is St. Andreas, the family church and Colonna place of sepulture, an elegant structure of massive proportions. This is said to contain the tombs of all the members of the Pagliano branch of the family, Philip I having brought the ashes of all his ancestors here, and constructed the family vault. Gregorovius
Lucrezia Tomacelli belonged to a noble family from Naples (Pietro Tomacelli was Pope Boniface IX from 1389-1404); she married Duke Filippo Colonna in 1597 at the age of 17; she bore him ten children before dying in 1622; she was so loved by her husband and her children that they added her family's coat of arms (a diagonal chequered band) to the Colonna one. 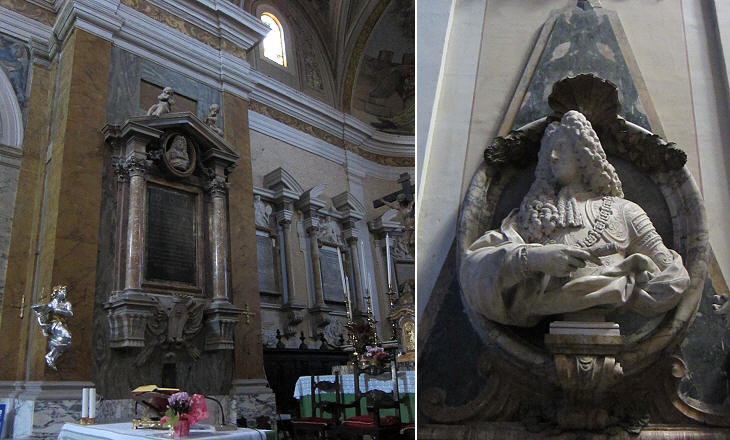 The Colonna could directly access S. Andrea from their palace and several members of the family were buried in the church including Marcantonio II Colonna, but Lucrezia Tomacelli Colonna was buried in S. Giovanni in Laterano, where the Colonna had a chapel; eventually the dukes preferred to live in their Roman palace and were buried in SS. Apostoli. 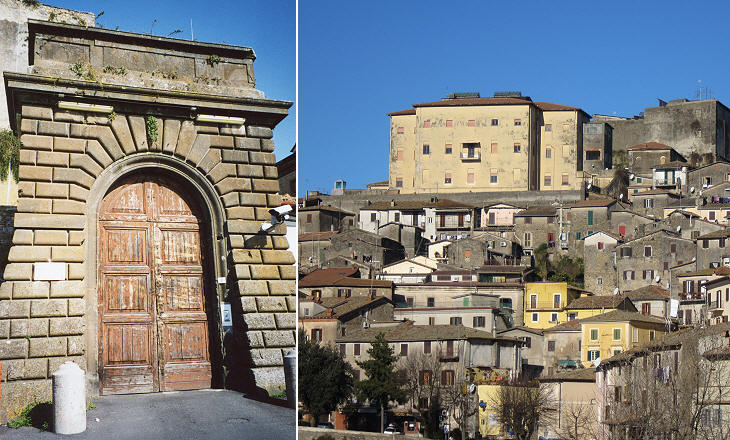 The fortress of Paliano: (left) main gate; (right) view from the town

The Citadel is now used for a bagno, or Papal prison, and here reside over 200 captives who have been condemned to the galleys, and over whom the Papal soldiers keep watch and ward. Gregorovius
After having regained possession of Paliano, the Colonna strengthened its fortifications by building a new fortress at the top of the hill; they eventually gave it to the Papal State; it was turned into a prison with the addition of new buildings; it is still a prison, although it houses some interesting paintings celebrating the triumph of Marcantonio II Colonna which are attributed to Federico Zuccari. 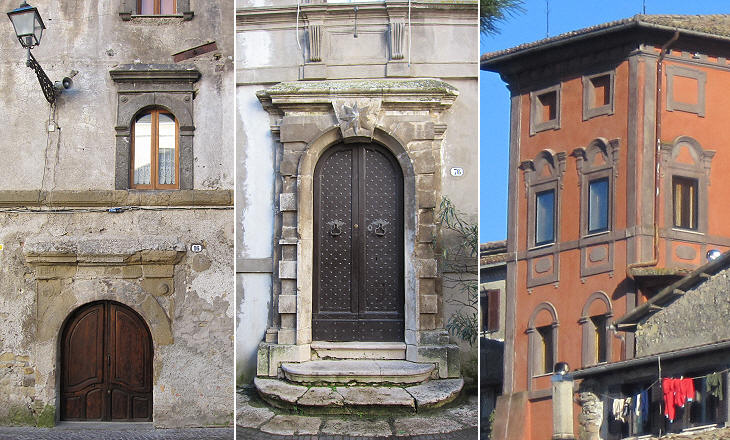 The town is gathered about the castle. Its streets are narrow, its houses dark, and for the most part unsightly. There is no sign of commercial activity, but when the country folk go forth of a morning to till the fields in the plain below, and when they return at night, there is a certain amount of stir and movement in the place. Gregorovius
The life of Paliano revolved around the Colonna and their palace; in general the grey houses surrounding the fortress are of little interest; some finer buildings can be found in the southern part of the town, far from Palazzo Colonna. 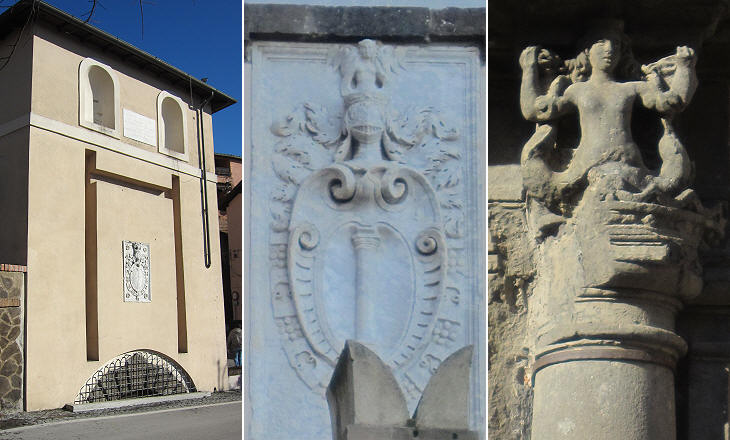 (left) Porta Napoletana; (centre) coat of arms of the Colonna at Porta Romana; (right) heraldic symbols of the Colonna (a crowned column and a mermaid) at Palazzo Colonna

Paliano had two gates, but only one road (from Genazzano) leading to the town which was accessed through Porta Romana; Porta Napoletana, the other gate, was used only by local peasants. References to the Colonna were pervasive and their heraldic symbols even replaced the traditional design of capitals: all economic activities were subject to the payment of rights to the Colonna.