- Genazzano
(detail of a fresco at S. Onofrio)

German historian Ferdinand Gregorovius spent his first summer at Genazzano in 1856; he rented a small room under the roof of a house in the centre of the town; notwithstanding the modesty of his accommodation (in his diary he complained about the heat), he definitely enjoyed his holiday and he returned to Genazzano in the following years; he described the town in Aus der Campagna von Rom (About the Roman Campagna). 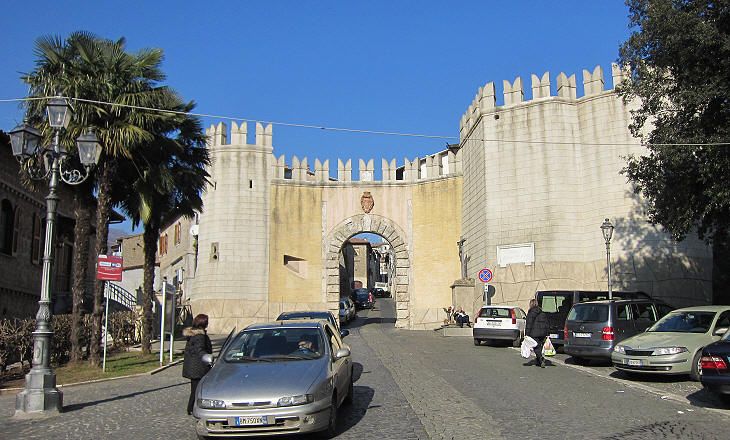 The main gate of Genazzano

The road (from Cave) descended suddenly into a charming region of hill and dale, which alternated in the happiest way, a picture of rural prosperity, with its grey olive groves, shady chestnuts, corn and maize fields and gardens, and everywhere the little dome-shaped elm trees; festooning them, dark masses of grape-vines. (..) A tower with battlements defends the little town of Genazzano. Gregorovius - translation by Dorothea Roberts
Genazzano is located a few miles east of Palestrina, but it is a much smaller town. It was built on a tufo ridge which was easily fortified by building a short wall on its southern side, because deep ravines protected it on the other ones; Genazzano has only one gate which has some resemblance with those of Palestrina. 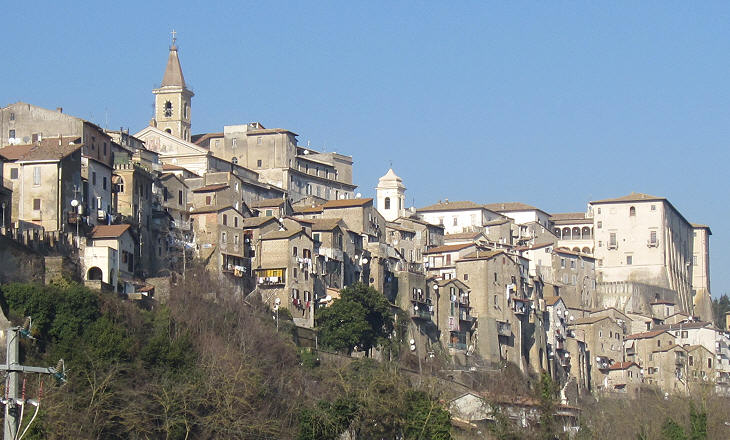 On the long rocky hills enclosing this picture Genazzano stands, a narrow, dark grey strip, just like the tufa rocks on which it is founded. The houses look as if they were marching in procession to the shrine of Santa Maria del Buon Consiglio, the great sanctuary of the Latian Campagna, or else taking their way up to that beautiful baronial Colonna castle crowning the summit of the hill, the dutiful vassals of its lord. Gregorovius
Although the houses of Genazzano have been modernized since Gregorovius visited the town, they still convey the image of a procession. 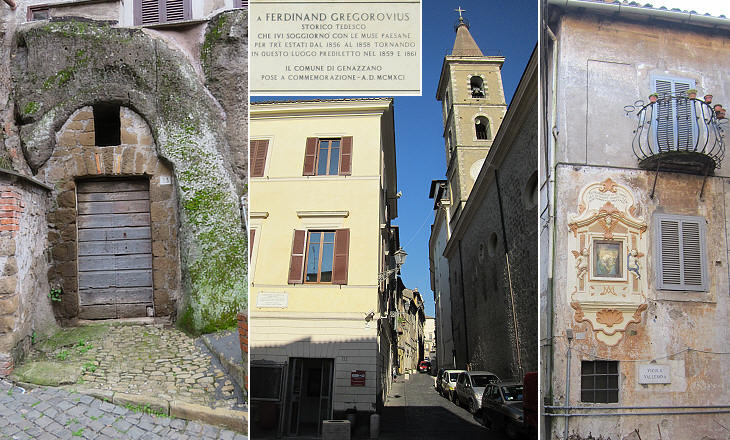 All the churches and other important buildings of Genazzano are aligned along the street which crosses the whole town from the gate to Palazzo Colonna; a plaque commemorates Gregorovius who in 1857 returned to Genazzano; he was not the only foreigner staying in this house opposite S. Maria del Buon Consiglio as in his diary he mentioned having met Thomas Buchanan Read, an American poet and painter and his pretty wife.
Some verses by Buchanan Read are similar to the account Gregorovius made of his walks in the countryside near Genazzano.

Deep in a sacred, summer wood
I hid me from the world away,
In sandal shoon and hermit hood,
To sit with Nature, night and day.
(Rural Poems - 1857)

In 1859 Gregorovius stayed at another place in Genazzano with two painters: Karl Lindemann-Frommel (German) and Hugo Oskar Von Mohrenschild (Estonian); he went there again in 1861. 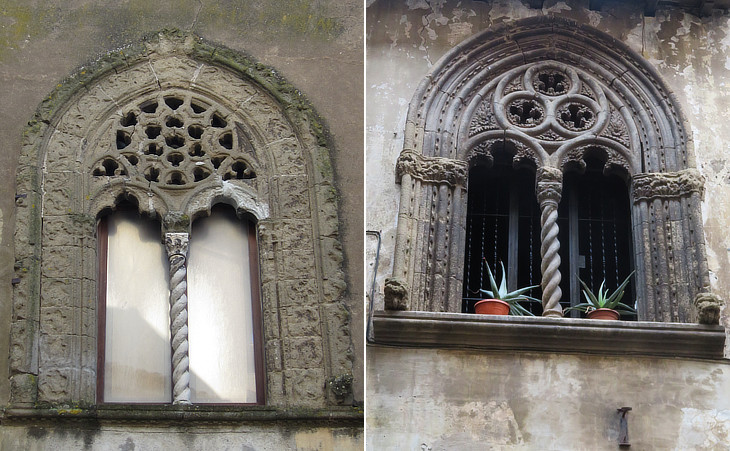 Miserable streets lead to the Piazza Imperiale, the principal square. The houses are sufficiently uninviting, but an occasional semi-circular Gothic window, like some withered efflorescence surviving from the Middle Ages, charms us by its Moresque rosettes. Gregorovius
Genazzano retains several elaborate Gothic windows which are deemed to have been built in the XIVth century; although similar windows can be seen in other towns near Rome, only Genazzano has such a large number of them. 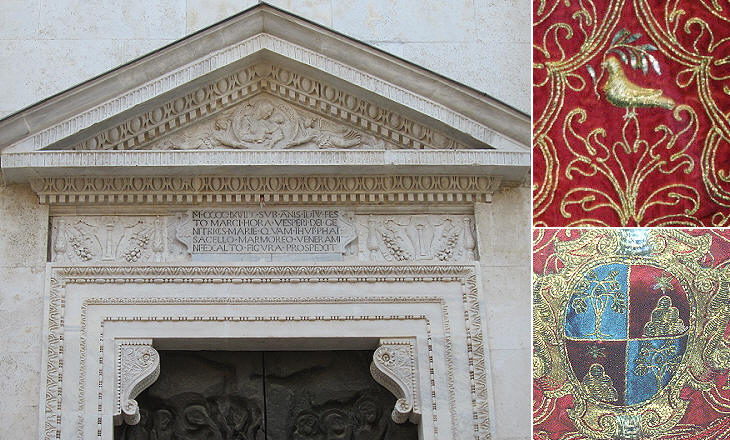 S. Maria del Buon Consiglio was (today slightly less) a famous sanctuary owing to a sacred image which miraculously moved from Scutari in Albania to Genazzano in 1467 when that country was conquered by the Ottomans. The popes used to make presents to the church: among them a finely embroidered chasuble, which was most likely started during the pontificate of Pope Innocent X and completed during that of Pope Alexander VII. The façade of the church was redesigned in the XIXth century, but it retains the original Renaissance portal which was decorated with the coats of arms of the Colonna family (also in the image used as background for this page).
I witnessed the Festa of this celebrated Madonna of Good Counsel here, on the 8th of September, and can therefore describe it. (..) Twice in the course of the year her festival is celebrated, and a double harvest of offerings is gathered into the Augustinian coffers. Countless are the gifts in money and valuables which believers bring. The poorest peasant comes to lay his mite on the altar of the Virgin. (..) Already, on the vigil of the Festa, pilgrims begin to arrive. Not only the place itself, but the whole district then begins to be alive, and the air is filled with songs and litanies, which resound without ceasing day or night. All the roads are filled with gaily dressed, orderly processions coming along towards Genazzano. (..) You heard nothing but the melancholy chanting of the processionists, who, one after another, streamed through the streets drawing on towards the church. Arrived at this goal after their long march, each seemed to forget his fatigue, and their faces beamed with fervent devotion. They fell on their knees before the church door, their hands folded on their long staves, their bundles still on their heads, singing litanies in a loud voice, and then raising the shrill cry of "Grazie, Maria!" (..) On and on the procession glided through the side aisle of the church, then in front of the altar, singing, praying, crying aloud ecstatically for pardon. That cry, "Grazie, Maria!" yelled out with frightful energy, the feverish, almost frantic, fervour with which they poured it forth, made me shudder. (..) The town could not house all the pilgrims. As the night deepened the poor people, used to hardships, lay down on the rough pavement of the streets in crowds. They gathered round the wells and in the squares, for country people care little about losing a night's rest when travelling. (..) When they reached the last point, on their homeward way, from which Genazzano was visible, they all knelt down, their hands folded round their pilgrim-staves, and said a parting prayer. This scene beneath the free heavens seemed to me the most beautiful of all. I liked to see the women's figures as each one knelt down with such a graceful gesture, her eyes fixed on the shrine from which she was now taking her leave comforted. Gregorovius 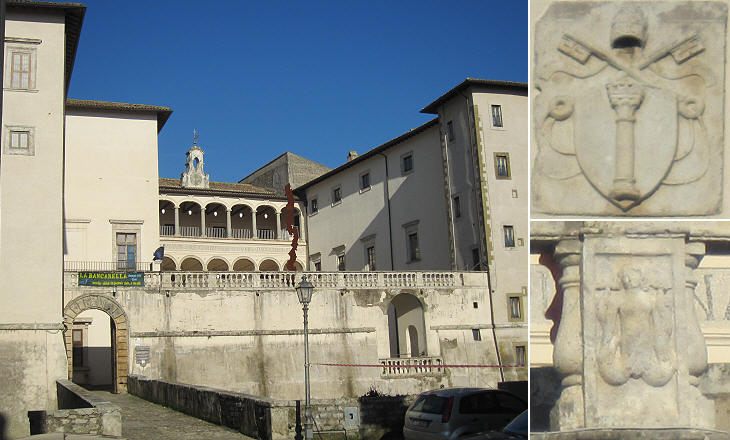 (left) Palazzo Colonna; (right-above) coat of arms of Pope Martin V; (right-below) a mermaid, one of the heraldic symbols of the Colonna

In the beginning of the eleventh century a fortress is first mentioned in a deed, as existing at Genazzano; and this castle belonged to a Colonna of Palestrina. It gave a title and a residence to one branch of that great family. The only Pope who came of that great race is said to have been born here. This was Pope Martin V - Oddone Colonna, elected at Constance in the year 1417, with whom the Avignon schism in the Church came to an end. That great man, at all events, belonged to the Genazzano branch of the Colonna family. He delighted in the solitude of his ancestral home. He loved the place; he built churches there, and, apparently, enlarged the palace which his nephews afterwards embellished, and constructed the aqueduct. Gregorovius
The family palace was built at the beginning of the XVth century by the Pope; it was enlarged towards the end of that century and it was partially redesigned in the XVIIth century; on that occasion the balustrade was decorated with the Colonna heraldic symbols. 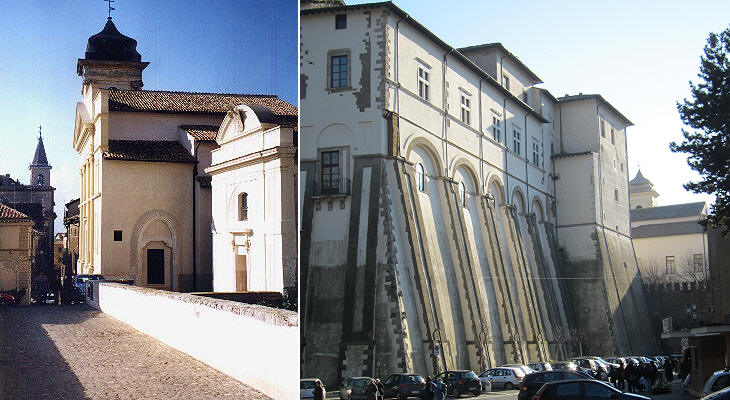 The medieval church of S. Nicola which stands along the main street was shortened in 1616 to facilitate access to the palace; the façade was redesigned in the XIXth century.
While the side of the palace towards the town was given a gentle appearance in the XVIIth century, the back shows the defensive purpose of the building which is also referred to as Castello Colonna. 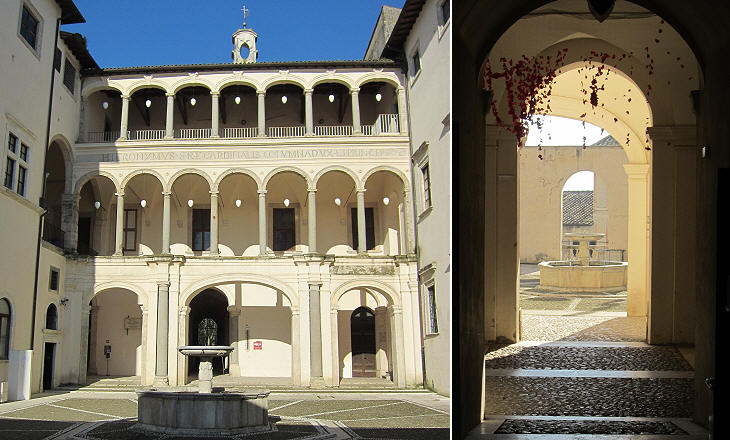 (left) Courtyard of Palazzo Colonna with inscription celebrating Cardinal Girolamo Colonna also as "dux et princeps"; (right) passage from the rear part of the building to the courtyard

Girolamo Colonna was appointed cardinal in 1627 at the age of 23; in 1641 at the death of his elder brother Federico he took responsibility for managing the family fiefdoms; in 1630 the Colonna had sold Palestrina to the Barberini and Cardinal Girolamo decided to improve the palace of Genazzano; the courtyard was redesigned by Antonio del Grande with the addition of a second loggia; he was the family architect and he is best known for having designed the great gallery inside Palazzo Colonna in Rome; he also built the Colonna palace of Paliano.
In his palmy days, some Colonna has had all the towns possessed by his family depicted on the walls of one of the loggias here. The frescoes have vanished, as have the rights and titles this rich family once enjoyed from all these towns. Through these lofty, empty halls creeps an aged, superannuated physician with a silvery beard, the only dweller in them now. He looks like an old world magician or sorcerer. Gregorovius 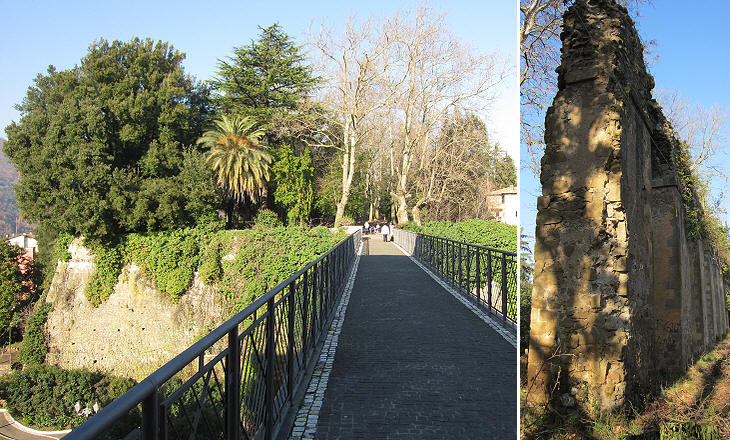 (left) Modern bridge linking Palazzo Colonna to a garden on a bastion behind the palace; (right) ruins of the aqueduct which supplied the palace

When about to take up one's residence in so remote a spot, the first desideratum, after making one's domestic arrangements, is how to find space for pleasant locomotion, good air, and green shade in which to read and reflect. The little town does not lend itself well to walking exercise, being too steep and too limited in space, with no green shady spot to sit in; but all round it are spread vineyards and chestnut groves, where one can indulge in the delights of solitude. There is, too, a level footway, though to reach it the Colonna palace must be traversed. Behind this palace is a bridge spanning a ravine, which rests on stone arches, not unworthy of the Romans themselves. An aqueduct, now in ruins, had been constructed by the Colonna family, to convey water to their palace, and its crumbling arches look wonderfully picturesque amongst the green trees of what was once a park, but is now no less neglected than the aqueduct. Beside it runs a path which leads on to the deserted convent of San Pio. I recall with delight that day when, on my voyage of discovery, I first explored that path through the vineyards to its terminus. Gregorovius
Bridges linked Palazzo Colonna in Rome to the gardens the family possessed on the Quirinale hill; similarly their palace in Genazzano was linked by a bridge to a garden designed in a former defensive bastion. 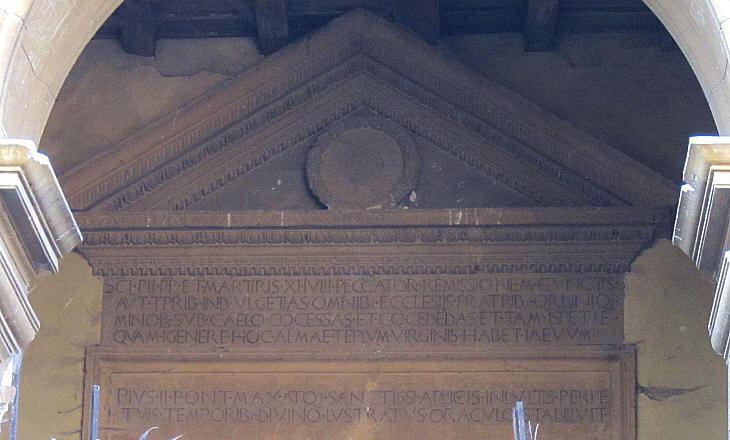 S. Pio - the inscription granting indulgence which was dictated by Pope Pius II

S. Pio was a church and convent founded in 1461 by Pope Pius II and dedicated to Pope St. Pius I. At the time of Gregorovius the church was abandoned and in 2011 it was still abandoned although a small scaffolding on its right side indicated the beginning of a restoration. 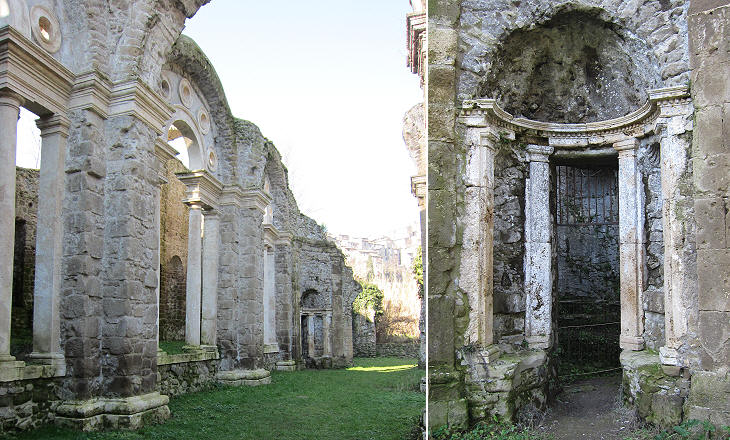 In a small valley near the main gate the Colonna built a nymphaeum which today is called Ninfeo del Bramante, although no firm evidence has been found of the involvement of that architect; most likely it was never actually completed; the remaining walls have the appearance of ancient ruins, but the serliana design of the arches is typical of XVIth century Renaissance.