- Cervara di Roma and Rocca Canterano
(detail of a fresco at S. Onofrio) 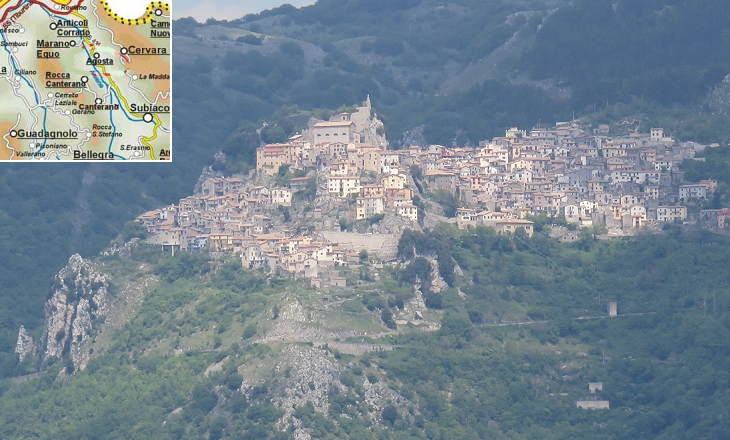 View of Cervara from Rocca Canterano; (inset) small map showing the towns covered in this page

The conditions of the Pope's household at Rome were reproduced on a smaller scale at Subiaco. The monks, filled with rabid party animosity and ambition, began to laugh at the rules laid down for their guidance by Benedict. At the death of their Abbot, in 1276, one of them, named Pelagius, fell upon the Monastery with an armed force  he stormed it  and proclaimed himself temporal ruler of the whole territory. He drove out the brethren, he plundered the church, he seized the contents of the treasury  then, with his spoils, he retreated to Cervara, a rocky fastness above Subiaco, which strong place he held by force of arms, the Abbey meantime lying empty and deserted below. The Pope proceeded to appoint another Abbot, who arrived presently with a strong military escort; but Pelagius could only be dislodged after he had made a strenuous resistance to this force.
F. Gregorovius - translation by Dorothea Roberts 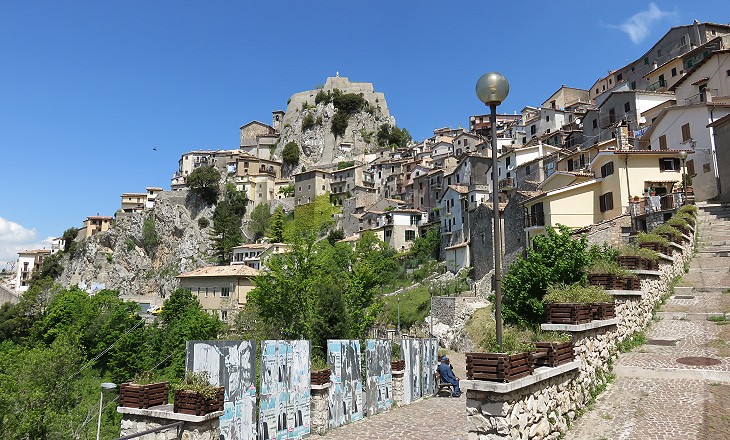 On the crests of the mountains which close in this beautiful river between their cliffs, once stood many dark feudal castles of the Middle Ages, which were in former days under the jurisdiction of that old Benedictine Monastery of Subiaco. Gregorovius
Cervara is situated at an altitude of 1,020m/3,346ft on the eastern side of the River Aniene valley in a very commanding position. Its name is a reference to the deers (It. cervi) which lived in the area and it must not be confused with Tor Cervara in the outskirts of Rome. 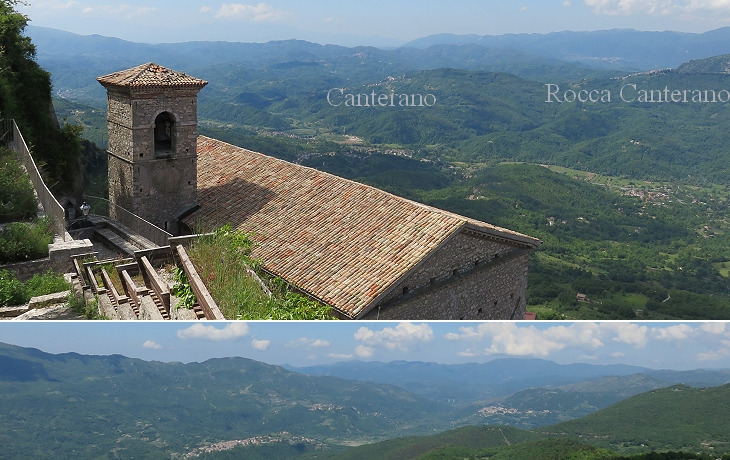 (above) Bell tower of S. Maria Assunta and view over the upper River Aniene valley and the Prenestine Mountains: (below) view towards Anticoli Corrado (left) and Roviano (right)

Cervara was populated and fortified in order to protect Subiaco. Its position provided early notice of an armed force advancing towards that town. The Saracens raided the Abbey of S. Scolastica in 829 and in 877 and Cervara was first recorded as a castle of the Abbots of Subiaco in 883. In the early XIIIth century the Abbots lost Sambuci, Anticoli, Roviano and other castles in the lower part of the River Aniene valley and Cervara became their northernmost possession. 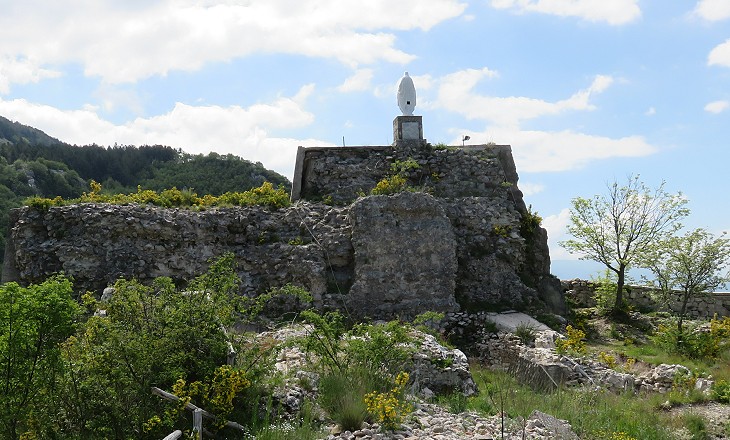 In 1511 Pompeo Colonna, Commendatory Abbot (i.e. appointed by the Pope, rather than elected by the monks) of Subiaco, was charged with having joined a plot against Pope Julius II, when the latter was sick. He was deprived of his position and he retired to Cervara where he built a small castle at the top of the hill.
Cardinal Giovanni Angelo Braschi was appointed Commendatory Abbot of Subiaco in 1773 and he retained the title after having been elected Pope Pius VI in 1775. He considered replacing the medieval castle with a state-of-the-art fortress, but the project was abandoned because it was too expensive. 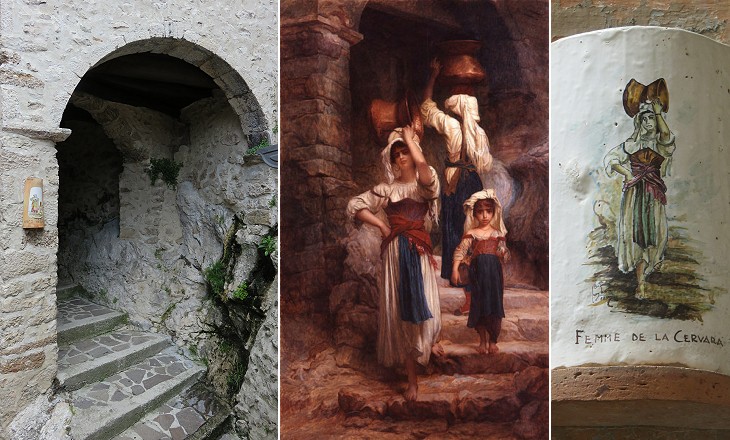 (left) Hébert's Arch; (centre) the same arch in "Women of Cervara" by Ernest Hébert (1858 - Musée d'Orsay - Paris); (right) modern decoration of a street of Cervara based on the painting

Landscape with Roman Ruins and Portrait with Roman Ruins in the Background were the commonest titles of oil paintings sold to foreign travellers visiting Rome until the end of the XVIIIth century. Changes in European tastes made Peasants of the Campagna the new most popular Roman painting in the early XIXth century.
Charles Dickens described the models who spent their days waiting to be hired at Piazza di Spagna in 1845. Some painters however went in search of the real thing and visited the small towns around Rome where traditional costumes were still worn. 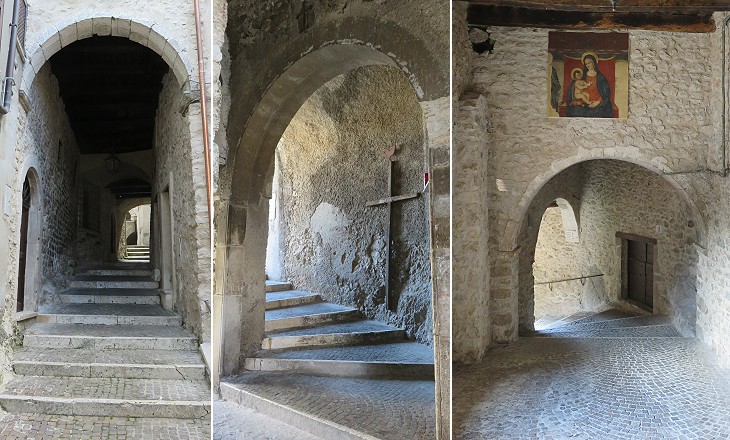 Other vaulted passages at Cervara

In 1839 French painter Ernest Hébert won the Prix de Rome, i.e. a bursary that let him study art at the French Academy in Rome for three to five years. He chose to stay on in Rome where he spent thirty years of his life. He was appointed Director of the French Academy in 1867-1873 and in 1885-1890. His portrait of women of Cervara was met with great appreciation at the 1859 Salon, an official art exhibition held every year in Paris.
Cervara retains many other vaulted passages similar to that which Hébert used as a frame for his models, but today's travellers should not expect to see girls carrying water in a conca (a traditional copper vessel). 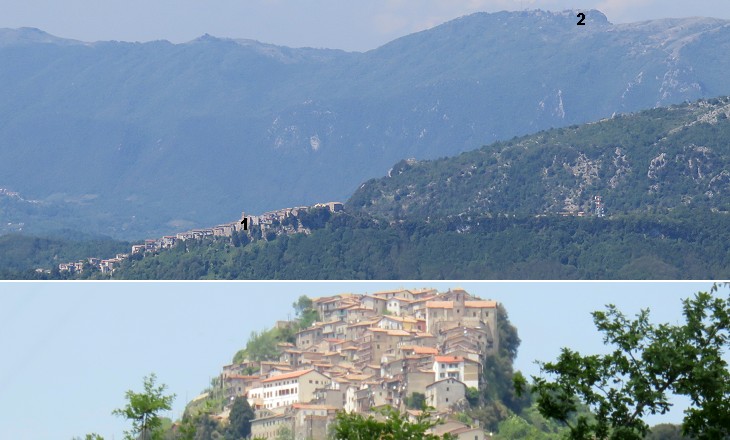 Rocca Canterano is situated on a ridge on the other side of the valley at an altitude of 750m/2460ft. The term rocca indicates that, similar to Cervara, it was founded with a defensive purpose, i.e. to protect the valley from raiders approaching along a medieval road which linked Tivoli to Subiaco, via Ciciliano and the mountain ridge where the small town is situated. In the XIth century it was listed among the possessions of the Abbots of Subiaco. 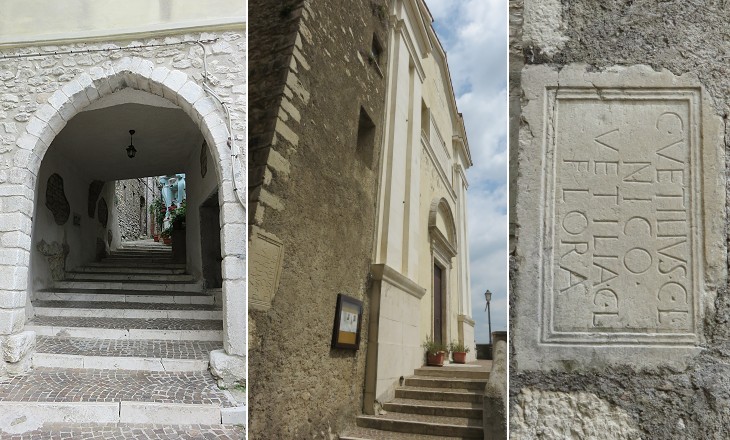 Rocca Canterano retains most of its old aspect, because its population has gone down from 1981 in the 1911 census to just 207 in the 2011 census. It has two gates. The southern one is the entrance from Subiaco while the northern one is used to reach Rocca di Mezzo, a tiny fortified village along the medieval road. The parish church was rebuilt in 1673 by Cardinal Carlo Barberini, Commendatory Abbot of Subiaco. The Barberini, the family of Pope Urban VIII, had three consecutive Commendatory Abbots from 1633 to 1738. 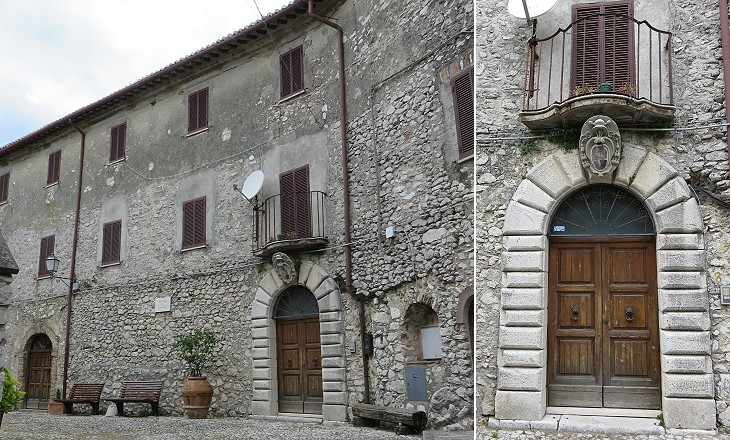 Piazza di Corte usually indicates a square near a palace/castle as at Ariccia. At Rocca Canterano it is located at the top of the town where the Abbots of Subiaco or their representatives had a residence inside a small castle. In 1759 the castle was in a dilapidated state and it was acquired and redesigned by Arcangelo Moretti, member of a local wealthy family. 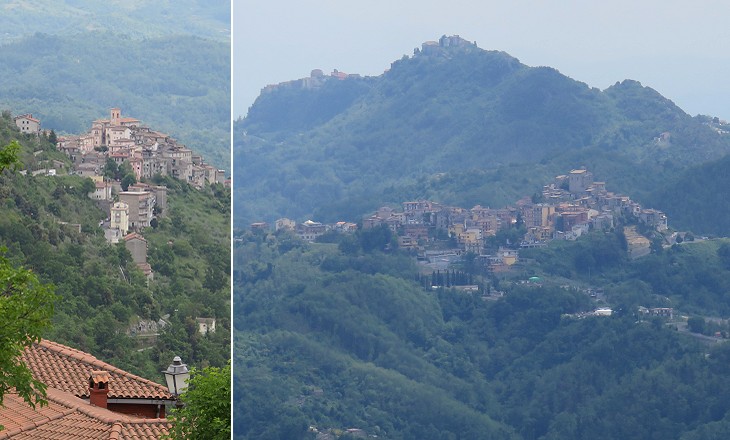 (left) Canterano; (right) Rocca S. Stefano and behind it Bellegra (you may wish to see the reverse view from Bellegra)

The fact of being part of the same territorial unit did not prevent the inhabitants of the small towns belonging to the Abbots of Subiaco from quarrelling. Usually these quarrels arose from rights of pasturage, but on one occasion women of Canterano were abducted by shepherds of Rocca Canterano. 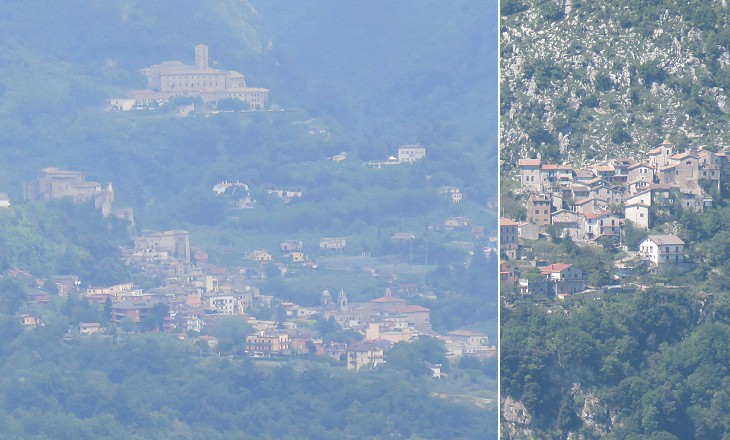 The image used as background for this page shows a detail of a 1970s mural painting by Giuseppe Ciotti at Cervara.

Other pages on this walk: Subiaco, S. Scolastica, Sacro Speco and Trevi and Filettino.