Anticoli derives from Latin ante colles which means opposite the hills because it faces the Apennines, the range of mountains which runs through the whole Italian peninsula. Corrado is a reference to Count Corrado d'Antiochia, grandson of German Emperor Frederick II, of the Hohenstaufen family, aka Frederick of Swabia, after the German region near the border of Switzerland where the Hohenstaufen had their initial possessions. The reference was added in ca 1870 to distinguish this town from another one by the same name.
In 1268 Corrado d'Antiochia fought with his cousin Conradin of Swabia against Charles of Anjou. They were defeated at Tagliacozzo, not far from Anticoli; Conradin fled towards Rome and eventually he tried to reach Pisa by sea, but he was betrayed at Torre Astura and handed over to Charles of Anjou. Corrado d'Antiochia continued the fight of the Swabians against Charles of Anjou leading a revolt in Sicily and threatening the nearby Anjou possessions from Anticoli.
Antiochia (Antioch) is an ancient city near the border between Turkey and Syria. It was conquered by the Crusaders during the First Crusade and it became the capital of a small independent Christian state (Principality of Antioch) which lasted until 1268. The Hohenstaufen had some legal rights to it. 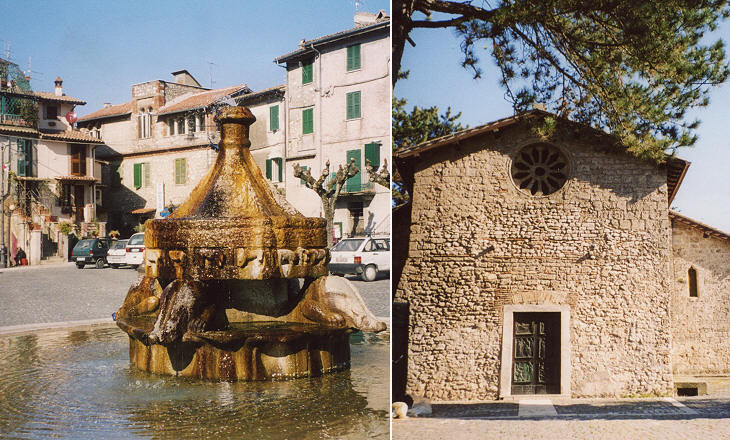 The main square of today's Anticoli was in the past an open space between the town and its cemetery. The fountain at the centre of the square was designed by Arturo Martini, an Italian sculptor who lived at Anticoli in 1924-1927 and whose works were highly appreciated during the Fascist period.
S. Pietro is the oldest church in town and it dates back to the XIth century. (left) House of a noble family; (right) house built on the rocks

Anticoli is built on the top of a hill and rather than streets it has steps (which sometimes are cut in the stone of which the hill is made). Several buildings show a certain level of wealth, which is confirmed by many coats of arms. 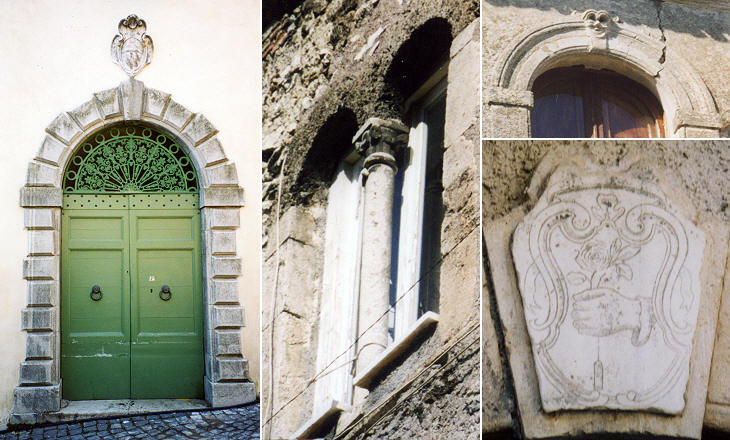 (left) Portal of Palazzo Carboni (XVIIth century), another small portal is shown in the image used as background for this page; (centre/right) wandering in the streets of Anticoli

Most of the streets of Anticoli are dedicated to the painters who came to live here and who in some cases fell in love with their model and married her settling in Anticoli (see a page on a family of painters). The museum of Anticoli exhibits works of the painters who lived in Anticoli, including Maurice Sterne, an American born in Latvia, who travelled extensively in Europe and Asia (see a painting by Sterne showing Anticoli in the Phillips Collection - it opens in another window).

You may wish to see a view of Anticoli by Alberto Pisa or read what Dickens wrote about Roman models. 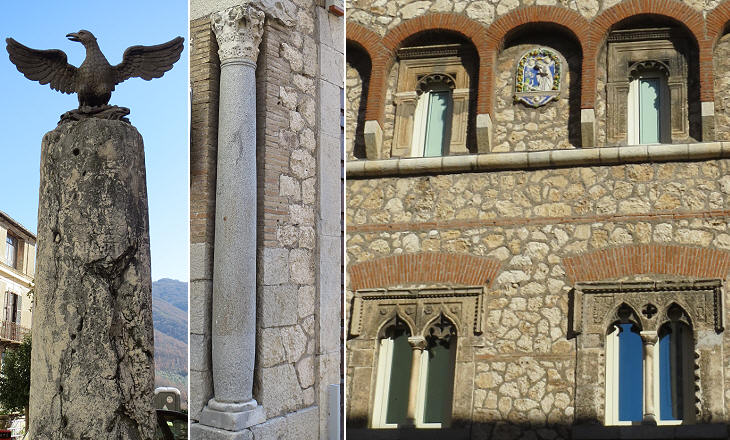 (left) Milestone of Via Tiburtina Valeria and above it a phoenix, symbol of the town (you may wish to move on along the road and visit "Alba Fucens", a small Roman town); (centre) ancient column and capital; (right) building with windows showing the transition from medieval to Renaissance patterns

Arsoli was the last town of the Papal State along Via Tiburtina Valeria before the border with the Kingdom of Naples. The town was founded in the late IXth century around a monastery which was eventually turned into a small castle by the Benedictine Abbots of Subiaco. In 1280 the castle was sold by the Abbots and after having belonged to several families, including Orsini and Colonna, it was acquired by Fabrizio Massimo in 1574. 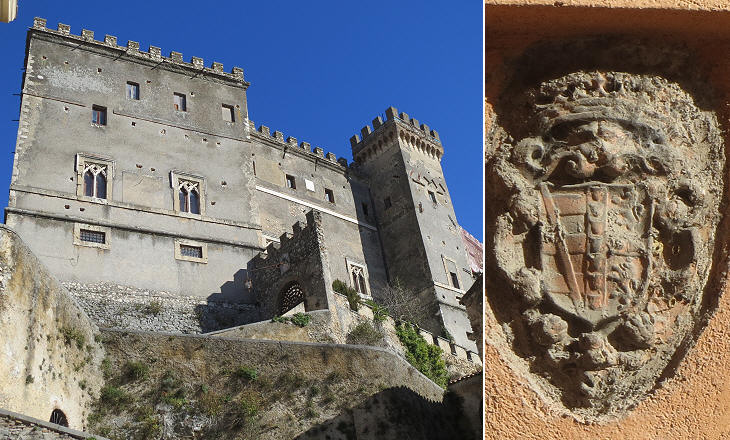 (left) Castello Massimo; (right) nearby coat of arms of the Massimo

The Massimo largely rebuilt the castle which still belongs to the family. It includes a garden where some of the statues which decorated Villa Peretti (or Massimo) were relocated after the villa was sold. In Rome the Arsoli branch of the Massimo lives at Palazzo Massimo alle Colonne. 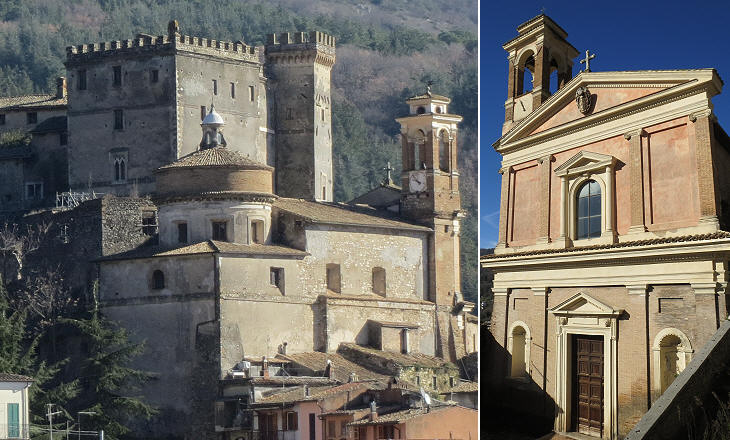 The redesign of the castle was commissioned to Giacomo Della Porta, a leading architect of the late XVIth century, who added SS. Salvatore, a large parish church, between the castle and the centre of the small town. The castle housed a small chapel dedicated to St. Philip Neri, a friend of the Massimo who brought back to life a young member of the family for a short time. 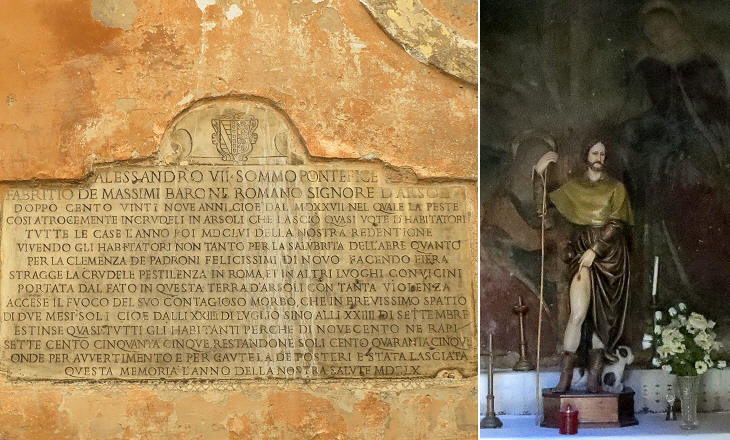 (left) 1660 inscription describing the 1656 pestilence; (right) statue of St. Roch in the chapel by the same name

The symbol of Arsoli is a phoenix, a mythological bird that is ciclycally reborn, a reference to the survival of Arsoli after the many war events and pestilences which struck its inhabitants. An inscription details the dramatic impact of the 1656 pestilence. In two months 750 of the 900 inhabitants of Arsoli died. This explains why a small chapel is dedicated to St. Roch, who is specially invoked against the plague.

Return to Introduction and Castel Madama, Vicovaro, Sambuci or to Mandela and Roviano.