- Subiaco: Sacro Speco
(detail of a fresco at S. Onofrio)

In July 1857 Ferdinand Gregorovius, a German historian best known for his studies on medieval Rome, visited Subiaco to look at some documents in the library of the Benedictine monastery of S. Scolastica. In the following year a German paper published Subiaco das älteste Benediktinerkloster des Abendlandes, a short account describing this monastery and that of S. Benedetto (Sacro Speco - Holy Cave), which is located nearby. Gregorovius provided his readers with a detailed historical background of the two monasteries. 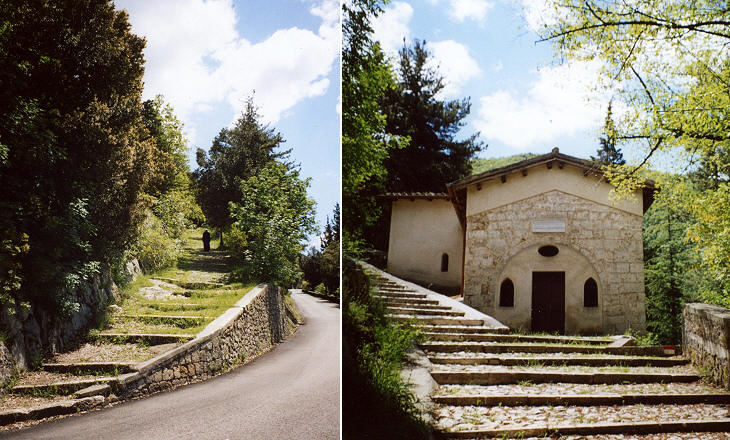 And now we climbed up to that curious shrine of the Benedictine Order, that second little Monastery, which was built over Benedict's cave, in the middle of the eleventh century, and, from it, is named the Sacro Speco. The monks of Monte Cassino made the road leading above the rocks to this grotto in 1688. It is a stiff climb, but rich in enchanting prospects. Clambering up by the river, which thunders in its rocky bed far below, you look down upon Subiaco and its beautiful valley.
Gregorovius - translation by Dorothea Roberts
A modern road leads very close to Sacro Speco, but those who are not in a hurry may prefer to reach it by a 1688 picturesque track flanked by chapels which provide a perfect introduction to the visit. 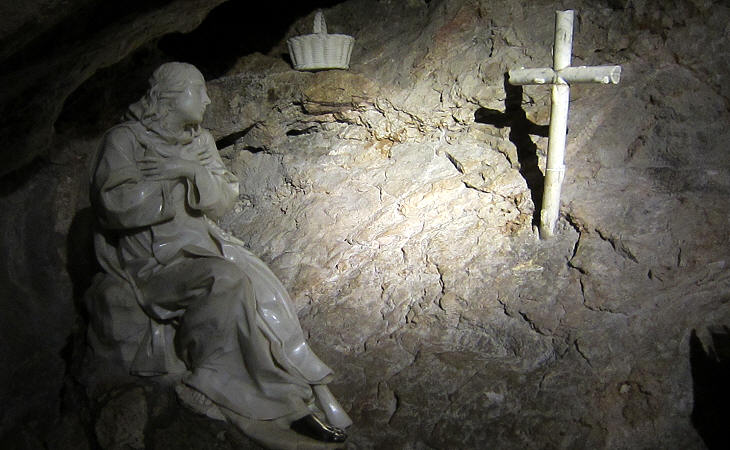 Sacro Speco: statue by Antonio Raggi portraying Benedict's ascetic life; Raggi was a scholar of Gian Lorenzo Bernini; his statue does not follow the traditional iconography of hermits who were portrayed with a long beard and barely dressed

The grotto of Benedict. (..) Behind a richly ornamented altar the figure of the youthful saint is kneeling in prayer before the cross; it is but a mediocre work of the Bernini school, yet is enhanced by the dim light of the cavern. But truly everything in this grotto has a theatrical, unreal effect. It is unlike anything else I have ever seen, so small, so fine, so gay and glittering; chapels and grottoes appear like glimmering phantasmagoria. It is curiously different from any other sacred shrine I have ever discovered. It is like an illuminated picture-book of legendary poetry, as bloodless and painless as the lives were of those pious Anchorites who lived in the wilderness, amongst the birds of the air and the wild creatures of the fields - religion presenting itself as a fairy tale, at least so it appeared to me. Gregorovius
Towards the end of the Vth century, at the time of the Ostrogothic Kingdom, Benedict, a young man from Norcia (Nursia), abandoned his studies in Rome and retired to live as a hermit in a cave near the former villa built by Emperor Nero in the Aniene River valley. He lived in the cave for three years; local shepherds placed some food inside a basket which they left in a small cave below that where he lived. The reputation of the holy life of the young hermit spread in the valley and after three years he was begged to become the abbot of a local monastery. In his years of solitude Benedict developed some strong thoughts on how a true Christian should behave. As an abbot he elaborated on them to develop rules for the life of his monks (Rule of St. Benedict). He is regarded as the founder of monasticism in Western Europe; he was canonized formally in 1220; in 1964 he was named the patron saint of Europe by Pope Paul VI. 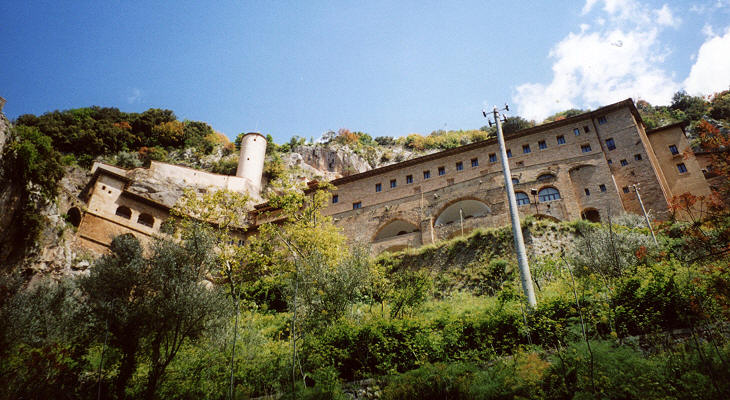 The monastery seen from the valley

This little collection of edifices, and the church built, bit by bit, over the grotto, and perched on the dizzy crest of a wall of rock, present a strange mixture of many different styles of architecture. (..) We must not, though, neglect to look out from the upper quadrangle, for from this spot we get the best view of the gigantic precipice against the face of which all these shrines are built. It falls down vertically to this platform, as if to destroy the Abbey; but the statue of St. Benedict is standing here with uplifted arm, and he exclaims in a warning voice: "Ferma, O rupe! non danneggiare i figli miei!" (Stop, rock do not fall on my children). Gregorovius
The new monastery was built at various stages along a steep ravine; it seems to hang on the rock and it was compared to a swallow's nest by Pope Pius II (you may wish to see the monastery of Sumela, near Trebizond in Turkey which is in a similar position).
A modern statue in the upper courtyard portrays St. Benedict in the act of telling the rock not to fall (it is the image used as a background for this page). 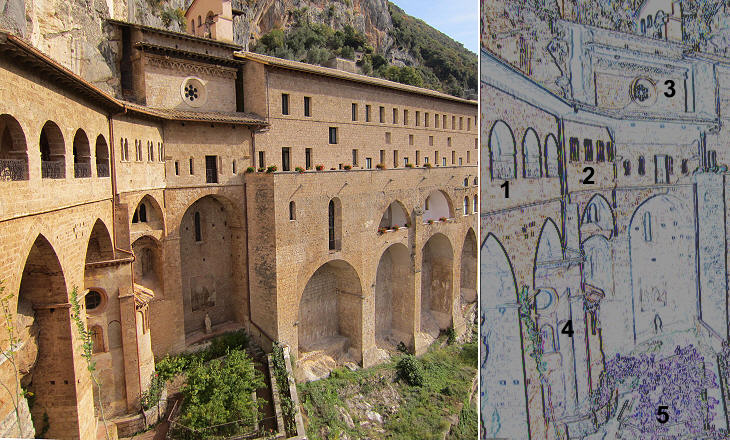 The monastery seen from the terrace preceding the entrance: 1) Passage leading to the Old Capitular Hall; 2) Old Capitular Hall; 3) Upper Church; 4) Lower Church (a series of chapels at different levels and including Sacro Speco and Shepherds' Cave); 5) Rose garden

We crossed a covered bridge, which had been used as a drawbridge in the Middle Ages, and from it entered a long gallery, leading to the interior of the building. (..) There is also a garden of roses, which once were thorns. (..) When the celebrated founder of the Franciscan Order visited Subiaco in 1223, he budded roses on those thorns, whose descendants bloom bravely to this day. Gregorovius
The entrance to the monastery is located at its upper end and the first rooms one sees are the last which were built and decorated.
A small rose garden is an excellent starting point for visiting the monastery following a chronological order. According to tradition instead of roses it had thorn bushes. 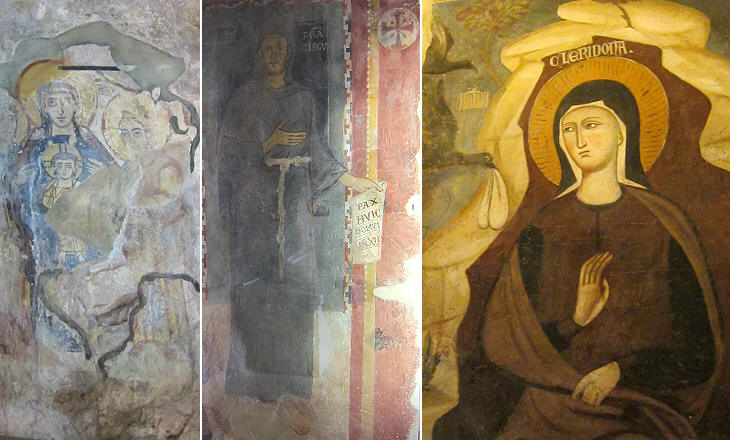 I saw three ravens crouching at the feet of this statue and croaking dismally. These mysterious birds, in their black Benedictine cowls, with their raucous voices, seemed to me the fitting attendants upon the saint. Just as in the ancient mythologies each god or goddess has a symbolic bird, the ravens play a part frequently in the story of Benedict's life. I have already said that they accompanied him when he departed from Subiaco, and wandered away to Monte Cassino. The reader must know that they had previously saved the saint's life. For it came to pass that an enemy had once sent a poisoned loaf to Benedict, and this they straightway took up in their beaks, and carried off to a desert place amongst the rocks. Gregorovius
A small very old fresco in the Shepherds' Cave indicates that the area was the object of worship before the construction of the monastery. One of the chapels which make up the Lower Church was dedicated to St. Gregory the Great, who wrote about the life of St. Benedict. The chapel contains the only contemporary portrait of St. Francis of Assisi: he is without the halo and he holds a paper with the words "Peace to this house" (Luke 10:5).
A raven is mentioned in the life of St. Paul the First Hermit; the bird brought the saint a loaf of bread every day for seventy years (see ravens at S. Paolo Primo Eremita in Rome). Ravens saved the life of St. Benedict. Ravens brought food to St. Chelidonia, a Benedictine hermit of the XIIth century who lived for more than fifty years in another cave of the Aniene River valley. 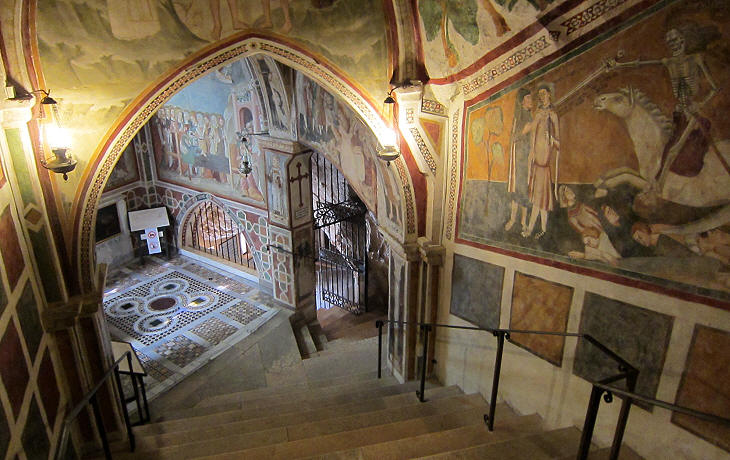 I noted two frescoes, placed opposite each other on the walls of the narrow passage at the bottom of the last flight of steps which conducted me down to the lowest church. They represent the Triumph of Death. (..) Death, riding on a horse over dead bodies, smites down with his naked sword a youth who stands conversing with a companion. On the other wall three open coffins are depicted. In one lies the body of a young woman just dead, in the next her corpse when it had become a loathsome sight, and the third contains only her dry bones. Gregorovius
Scala Santa (Holy Stairs) is the name given to the staircase of Pontius Pilate's house near S. Giovanni in Laterano. At Sacro Speco it applies to the stairs built on the steep path linking the Shepherd's Cave with the cave where St. Benedict lived. Notwithstanding the different origin of the stairs it is not unusual to see believers ascending it on their knees. This part of the Lower Church is a mixture of different styles; the architecture is Gothic, while the Cosmati floor is typically Roman and the frescoes are of the school of Siena. 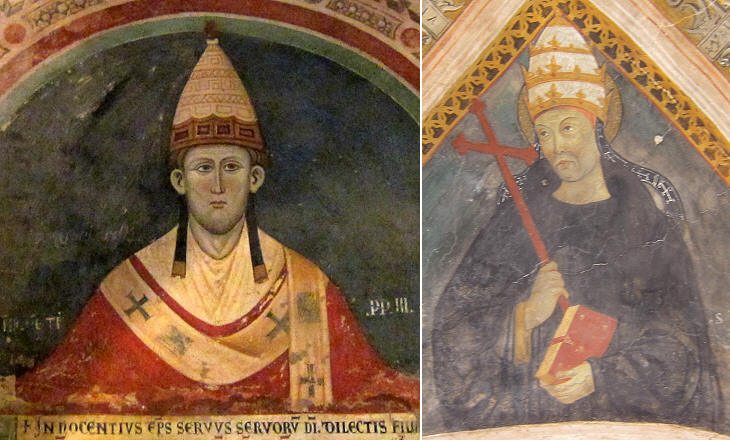 The portrait of Pope Innocent III may not immediately attract the attention of a foreign visitor, but it surely attracts that of Italians as they saw this portrait in their history books at school (a Briton would have the same reaction when seeing the portrait of King Henry VIII by Holbein). The painting is interesting also because it shows the papal crown as it was in the XIIIth century. In 1202 Pope Innocent III granted special benefits to the small group of monks who established themselves at Sacro Speco.
Pope Leo IV favoured the return of the Benedictine community at S. Scolastica after the monastery and the whole Aniene River valley were raided by the Saracens in the IXth century. The Pope is portrayed with the triregno, although this type of triple crown was not introduced until the end of the XIIIth century by Pope Boniface VIII. 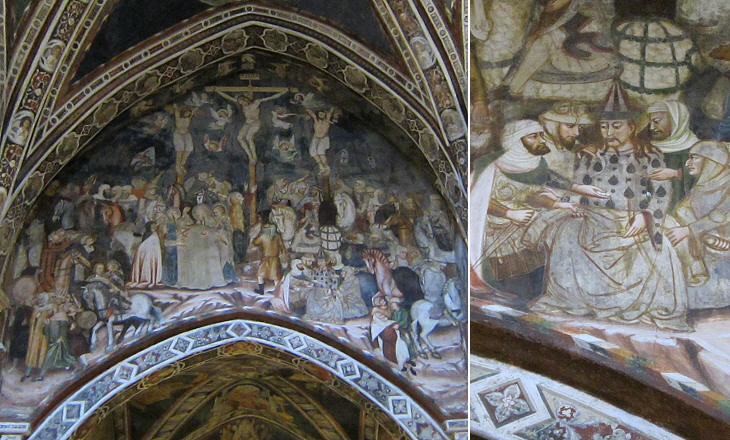 In the whole of Latium there is no collection of paintings comparable to these. (..) These frescoes are of value to the student of art because they belong to so many different styles - to the severe early Byzantine period, to that of Cimabue and of Giotto, as well as to the later methods of the artists of the fifteenth and sixteenth centuries. Gregorovius
The Upper Church is composed of just one nave, but it has the appearance of a church. Of the many frescoes which decorate it, the Crucifixion is particularly impressive: it is worthy to note that those having a negative role in the portrayed event are dressed in Arab or Turkish costumes of the XIVth century. 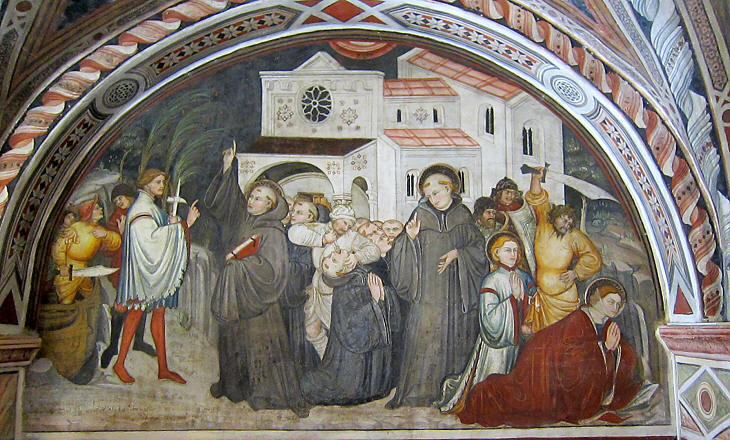 Almost every inch of the two churches is covered with paintings. St. Benedict lived at a time when Christians were no longer persecuted, yet the fresco shown above portrays the martyrdom of Placidus, a monk who followed Benedict when the latter founded a new community at Montecassino. He was confused with another Placidus, a Sicilian martyr of the IIIrd century. 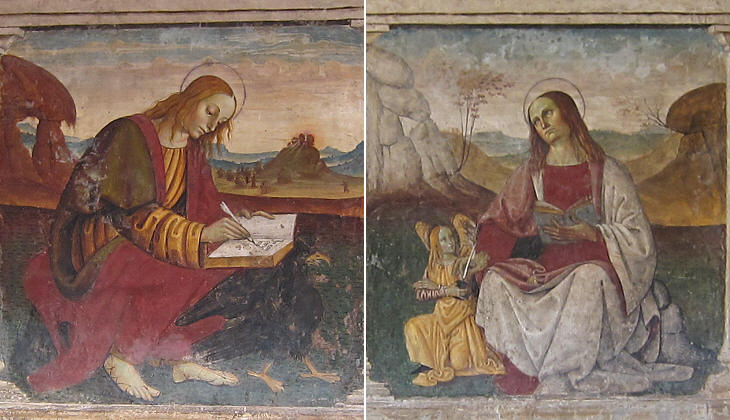 Sacro Speco continued to be decorated with new paintings until the beginning of the XVIth century; after that period, with the exception of Raggi's statue no other major additions to its works of art were made.

Return to S. Scolastica or to Subiaco or see the monasteries in the 1905 paintings by Alberto Pisa.