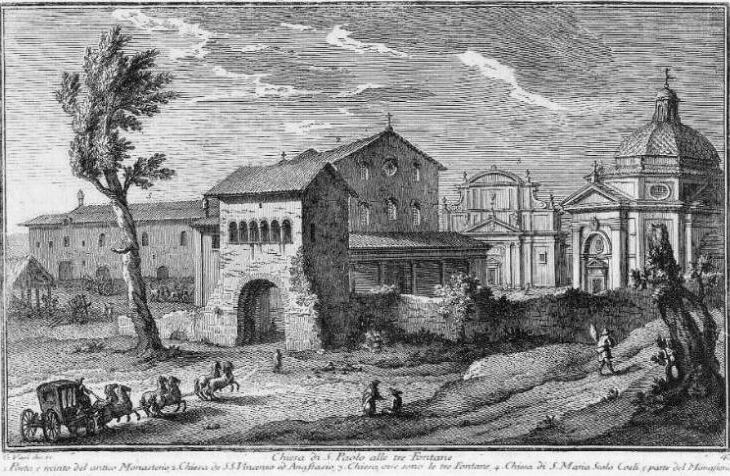 In 1575 Antoine Lafréry drew a map of the Sette Chiese, the seven basilicas of Rome which were visited by pilgrims; the print shows the pilgrims moving from one basilica to the other, but it shows also that a trickle of them (the most pious ones or those in greater need of gaining indulgences), after having reached S. Paolo fuori le Mura, instead of directly going to S. Sebastiano fuori le Mura, lengthened their journey by visiting also S. Paolo alle Tre Fontane, the church built on the site of the execution of St. Paul, and la Annunziatella.
In 1753, when Giuseppe Vasi published this etching, few pilgrims dared to visit S. Paolo alle Tre Fontane because the area near the church was marshy and plagued with malaria.
In the description below the plate Vasi made reference to: 1) main gate and walls surrounding the monastery; 2) SS. Vincenzo e Anastasio; 3) S. Paolo alle Tre Fontane; 4) S. Maria Scala Coeli; 5) Part of the monastery. The small 1850 map shows: 1) S. Paolo Fuori le Mura; 2) S. Paolo alle Tre Fontane; 3) Santuario del Divino Amore (Castel di Leva); 4) la Annunziatella; 5) S. Sebastiano fuori le Mura. 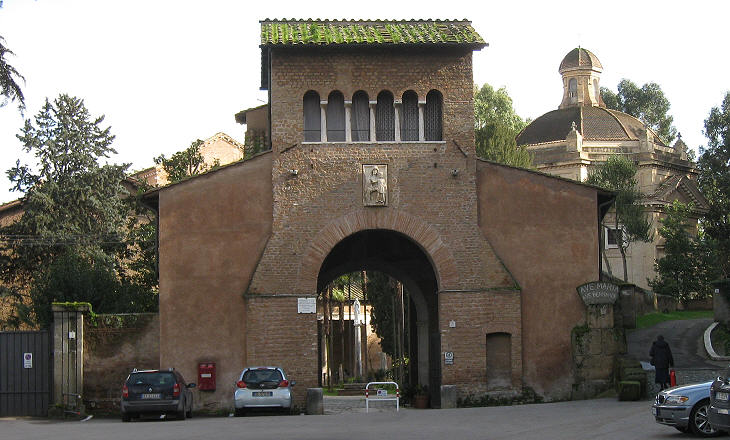 The site of S. Paolo alle Tre Fontane was so unhealthy that in the early XIXth century the monastery was abandoned; in 1867 Pope Pius IX assigned it to the Trappists, a branch of the Cistercian Order; they planted groves of eucalyptus (for the first time in Rome) to drain the swamp and reduce the risk of malaria. Today the churches and the monastery are surrounded by congested roads and by the modern buildings of Eur, but owing to the walls which still protect them, they remain an oasis of peace which invites meditation.
The gate at the entrance is called Arco di Carlo Magno, because Charlemagne made substantial donations to the monastery. The ceiling of the arch retains barely visible fragments of frescoes portraying events of the life of Charlemagne and some of the fiefdoms he donated, including most likely Ponzano. 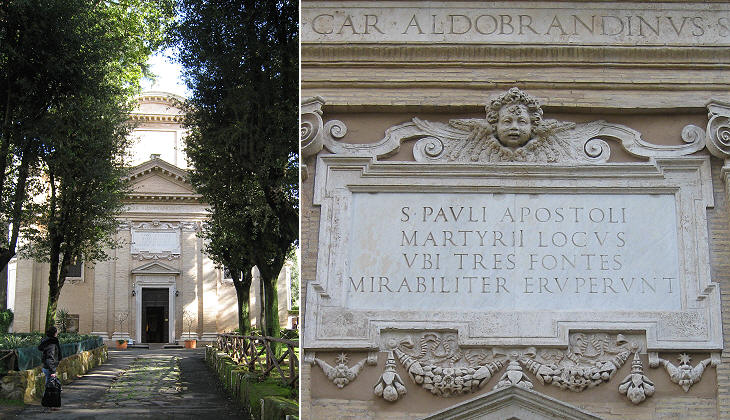 (left) Tree-lined access route to S. Paolo alle Tre Fontane; (right) inscription on the façade making reference to the three fountains which are inside the building

A mile from S. Paolo fuori le Mura are 3 fountains which were made when St. Paul was beheaded which was in this place, where his head tumbling on the Earth, it leapt three tymes on three severall places, a little distant one from another, out of which 3 places came three fountaines of water, which at present are adorned and covered with Marble.
Francis Mortoft's Journal of his travels in France and Italy in 1658-1659
According to tradition the head of St. Paul rebounded three times after being severed and each time a fountain sprang up. A church was built in the Vth century to shelter the three springs; it was entirely replaced by a new building designed in 1599 by Giacomo Della Porta for Cardinal Pietro Aldobrandini, nephew of Pope Clement VIII. Hall of the Fountains; the image used as background for this page shows a relief depicting the head of St. Paul, a detail of the decoration of the fountains

The waters are reported to be medicinal ; over each is erected an altar and a chained ladle, for better tasting of the waters.
John Evelyn's Diary and Correspondence (1645)
In the lower part of Rome, at no great distance from the Tiber, stands a moderately large church, called of the three Springs, fountains which, as is related, gushed forth on the shedding of St. Paul's blood when he was beheaded, and which still continue to gush forth to the present day. Independently of this, the church stands on a low site, and the jets of water springing forth in its interior no doubt increase its clammy dampness. The inside is little adorned, and almost left to itself, being kept only in a tolerably clean, although mouldering, state, for the sake of the few occasional services held in it.
J. W. Goethe - Italian Journey - December 1787 - Translation by Charles Nisbeth 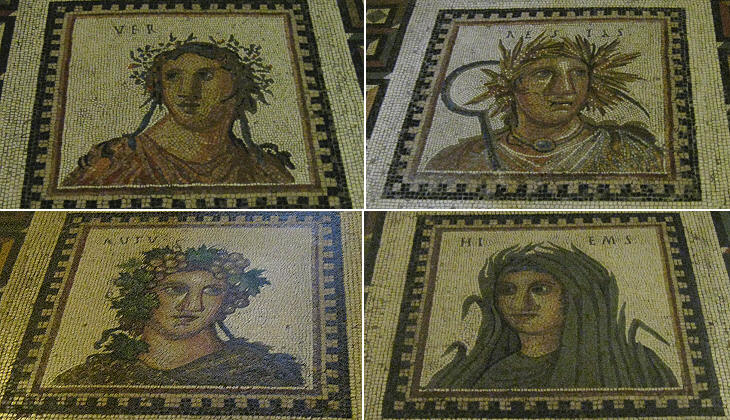 Mosaic from a mithraeum near the Imperial Palace of Ancient Ostia portraying the Four Seasons: Ver/Spring, Aestas/Summer, Autu(mnus)/Autumn and Hiems/Winter

Pope Pius IX restored the church and relocated there a Roman mosaic in order to celebrate the 1867 victory against Garibaldi at Mentana. 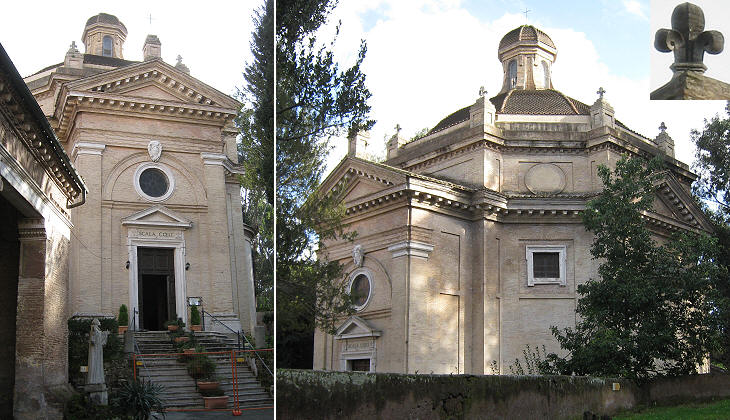 (left) Façade; (right) side view; in the inset a fleur-de-lis, the heraldic symbol of Cardinal Alessandro Farnese

In 1138 ca. Pope Innocent II assigned the monastery to the Cistercian Order which at the time was led by St. Bernard of Clairvaux; one day, while celebrating mass, St. Bernard had a vision: he saw angels leading the souls of the dead from Purgatory to Heaven along a ladder. An oratory near S. Paolo alle Tre Fontane was called Scala Coeli (Ladder to Heaven) in remembrance of that event. The building collapsed in 1582, but it was almost immediately rebuilt at the initiative of Cardinal Alessandro Farnese; also this church was designed by Giacomo Della Porta. 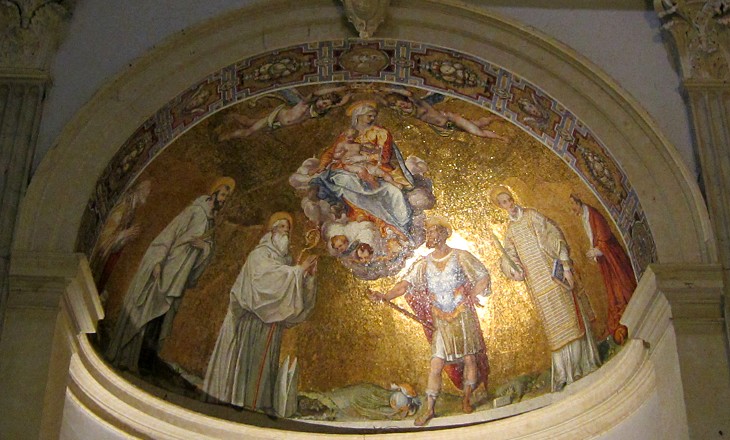 The Church of St. Maria Scala del Cielo, in whose Tribuna is a very fair mosaic work. Evelyn
Cardinal Aldobrandini promoted the decoration of the interior of the oratory. Francesco Zucchi executed another mosaic during the pontificate of Pope Clement VIII at S. Cesareo in Palatio. At that time it was felt that churches ought to be decorated with mosaics, similar to what had occurred in the early Roman churches (you may wish to see a page on this topic). 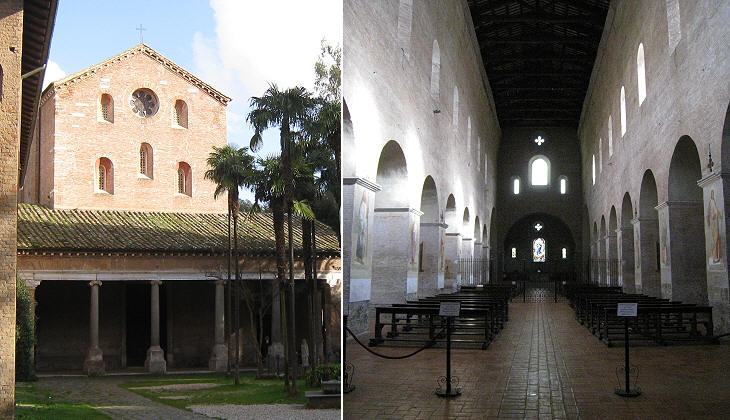 Similar to SS. Vincenzo ed Anastasio a Trevi this church was originally dedicated only to St. Anastasius of Persia; it was built as a shrine for housing the head of the saint. The first church (built in the VIIth century) was replaced by the Cistercians with a new one in the XIIth century; its simple design was an effect of the approach followed by St. Bernard of Clairvaux in the construction of many abbeys throughout Europe; the portico supported by ancient columns was the only concession to the traditional aspect of Roman churches. 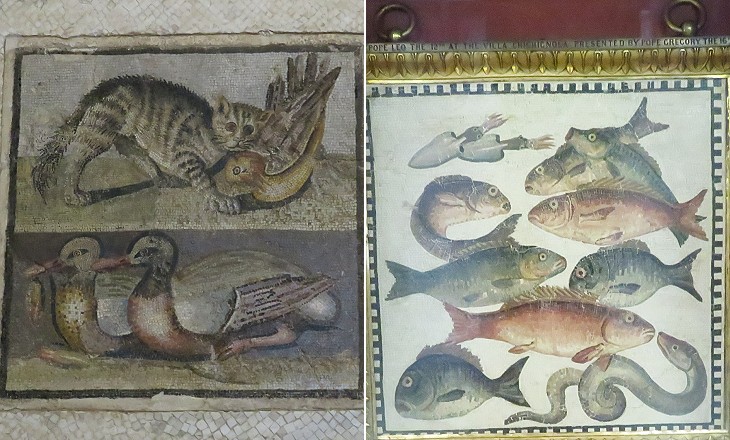 The mosaic at the British Museum was a gift to Sir Edward Thomason by Pope Gregory XVI via Cardinal Thomas Weld who in announcing the decision wrote: I flatter myself you will find it a very valuable addition to your collection and have no doubt it will be much admired by the lovers of the fine arts in England as it has been by those who have seen it here. As a matter of fact it is no longer given much attention, perhaps because it was excessively restored. 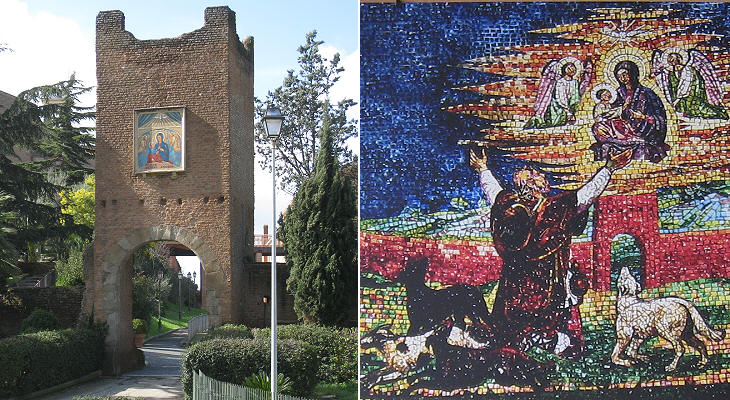 In 1740 a man attacked by stray dogs prayed for help before an image of the Virgin Mary painted on the main gate of Castel di Leva, once a fortress of the Orsini. He was miraculously spared by the dogs and the sacred image soon became popular and other miracles were attributed to its intercession; it was called Madonna del Divino Amore. 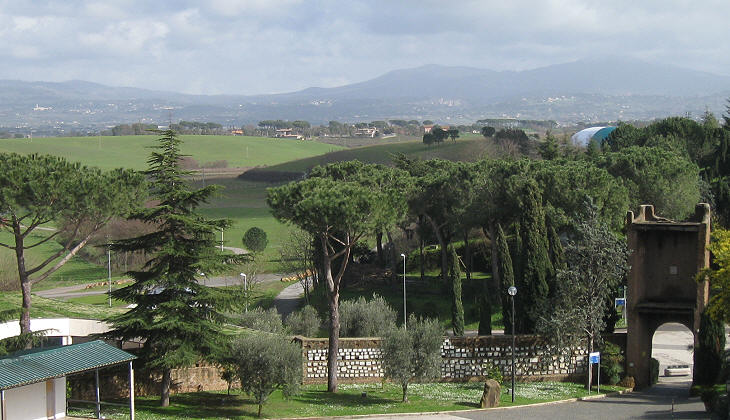 The countryside around Castel di Leva; in the background the Alban Hills (to the far left Abbazia di Grottaferrata); the white plaques to the left of the gate are ex-votos

Castel di Leva was located along Via Ardeatina, a minor road which started near Porta S. Sebastiano and reached Ardea and Anzio. At the time of the miracle it was a very isolated location. 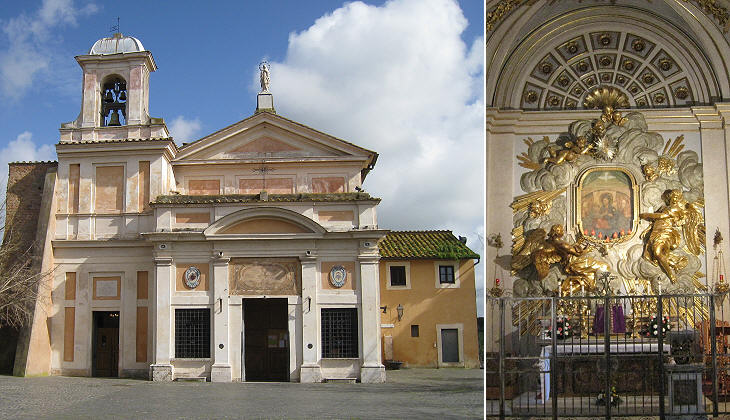 The sacred image was placed for a few years in a nearby estate and then transferred to a sanctuary built at the top of the castle; a brotherhood was founded to maintain the site and organize pilgrimages; in 1801 the brotherhood was assigned SS. Biagio e Cecilia, a small church in Rione Campo Marzio.
The sanctuary was not much visited, exception made for Whit Monday processions.
About half a mile from Via Ardeatina is the strada del Divino Amore, so called beeause it leads to a rural church of that name, three miles distant.
Rev. Jeremiah Donovan - Rome Ancient and Modern - 1844
There is no doubt that many of the amusements, still more many of the religious practices now popular in this capital, may be traced to sources in Pagan antiquity e.g. (..) the rural feasting before the chapel of the Madonna del Divino Amore on Whit Monday.
Heman Humphrey - Monuments of Rome - 1819 Interior of the new sanctuary which was completed in 1999

On Whit Monday the peasants from all the mountain villages resorted as usual to the solitary shrine on the Via Ardeatina, popularly called the Madonna del Divino Amore, at a once fortified place called Castel di Leva, of which, however, only a ruined wall has been remaining for centuries. They now come into Rome by tram or railway, and hire long carts furnished with common chairs, on which they proceed through the Porta San Sebastiano, carrying their suppers of bread and cherries tied up in handkerchiefs. The young men and women mostly wear paper roses with sprays of spun glass in their hats and tresses, and the same decorations are also fastened on the horses' heads. They drive along at a merry pace, singing when out of the city, at the full power of their Italian lungs, which seem of metal. Most of the country folks make this pilgrimage for devotion, having confessed and communicated before starting. But a mixed company from the city also drive there in cabs, with the same badges, to have a jolly pic-nic in the Campagna, whose lonely places are only safe resorts in large companies.
The Tablet - 27th May 1893.
The sanctuary became extremely popular in 1944 when Pope Pius XII entrusted the safety of Rome to Madonna del Divino Amore. Many modern sacred images in Rome are dedicated to Madonna del Divino Amore, e.g. at S. Saba. Every Saturday at midnight between Easter and the end of October a procession starts at Piazza di Porta Capena and reaches Santuario del Divino Amore before dawn.

Museo Nazionale Romano: sarcophagi which were found in 1956 at Porta Medaglia, south of Madonna del Divino Amore; they depict: (above) Gigantomachy, the battle between the Olympian Gods and the Giants, some of whom had serpent-tails for feet; (below) Centauromachy, see that at the Temple to Zeus at Olympia