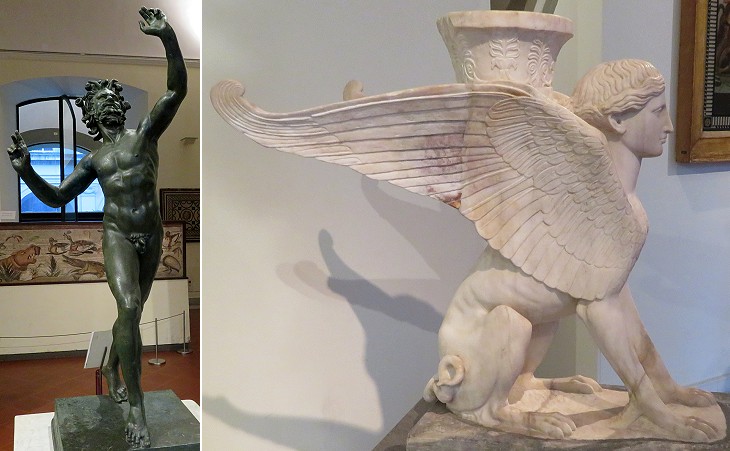 Archaeological Museum of Naples (from the House of the Faun): (left) bronze statue of a dancing faun marking the time by snapping his fingers; (right) marble leg of a table in the form of a sphinx

The Dancing Faun, a small statue which the unanimous testimony of all writers on art considers the gem of the Naples collection. It is also the most beautiful of all the bronzes found at Pompeii; and the house in which it was discovered will retain for ever the name of the "House of the Faun". Nothing can surpass the light and graceful character of this figure.
John Murray - Handbook for Travellers in Southern Italy - 1853
The house was initially known as House of Goethe, a reference to the German writer who visited Pompeii in 1787 and to his son Julius August who witnessed its excavation in 1830. The house had a very rich decoration which led to devoting a section of the Archaeological Museum of Naples to its works of art. 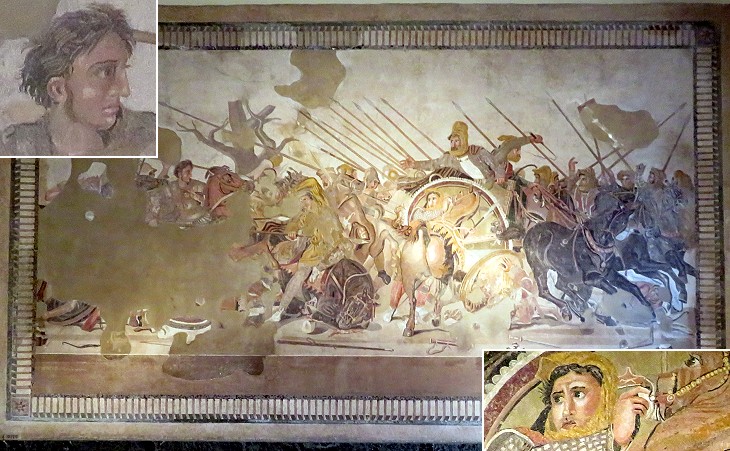 Archaeological Museum of Naples (from the House of the Faun): floor mosaic depicting the Battle of Issus between Alexander the Great and King Darius III of Persia; (insets) Alexander and a Persian horseman

It was removed entire, with consummate skill, by Gennaro Belliazzi, a Neapolitan artist, who successfully accomplished a task which all others had thought impossible. Murray
A complete series of the finest mosaics formed a part of the general decoration of the house. These are still partly preserved and to be seen on the spot. Here the celebrated Battle of Alexander was found. (..) At the battle of Issus great masses of troops were dashed against each other. Alexander in person pressed hard upon Darius, whose brother Oxathres interposed himself with his cavalry. The noblest of the Persians fell and Darius was menaced by the greatest danger. This is the moment represented by the mosaic. Darius thinks not of his urgent need of rescue, but, sunk in grief and horror, gazes on the corpses of his followers who have protected him with their lives. Alexander has dashed forward with irresistible strength; his helmet has fallen from his head with the violence of his action; and his mighty spear transfixes Oxathres on his falling horse, before the latter can mount the fresh horse offered by another Persian. (..) It is a scene of breathless suspense and excitement.
Karl Baedeker - Handbooks for Travellers: Southern Italy and Sicily - 1900
The mosaic is believed to be a copy of a lost Greek painting; the ruffled hair is typical of the iconography of Alexander. 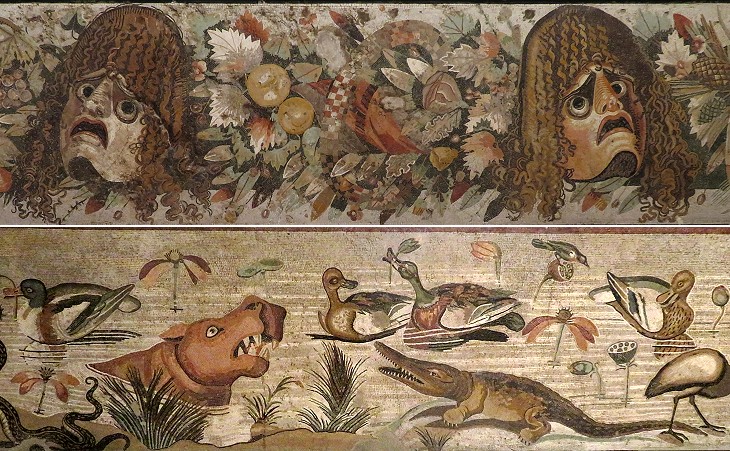 Archaeological Museum of Naples: floor mosaics from the House of the Faun: (above) garland with theatrical masks; (below) a "Nilotic" scene

The space usually occupied by pictures was here filled with mosaics, many of which like (..) the course of the Nile with the hippopotamus, the crocodile, the ibis, etc., have evident reference to the worship of Osiris. Murray
This type of mosaic originated in Alexandria and it depicted scenes set in the River Nile, very often with some comical aspects. It is pretty rare, although it has been found in all parts of the Roman Empire, from Lebanon to Rome and Germany. One of the largest and finest examples decorated the sanctuary to Fortuna Primigenia at Palestrina. 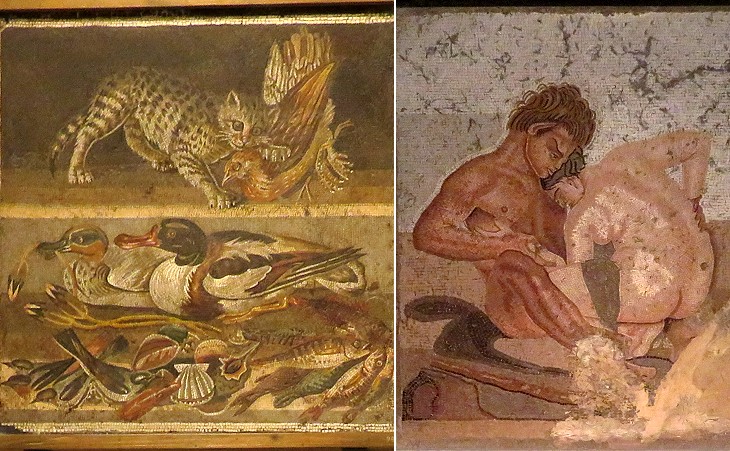 Archaeological Museum of Naples: floor mosaics from the House of the Faun: (left) a cat, birds and sea creatures (see a very similar mosaic from a villa at la Cecchignola near Rome); (right) a satyr with a nymph (from the Reserved Cabinet)

The other mosaics found in this mansion also rank high in point of beauty, as well as in precision and purity of drawing, and owing to the difficulties of reproduction in mosaic consequent on the nature of the material, the fact becomes doubly suggestive that in effectual and complete mastery of drawing there is nothing in the whole range of Pompeian pictures to surpass the border of masks, garlands, foliage, and fruits of the Casa del Fauno or the mosaics attributed to the artist Dioscorides (see below). Baedeker 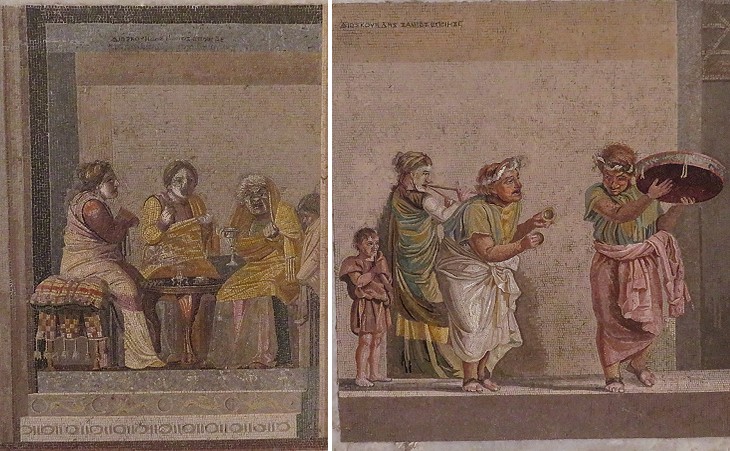 Archaeological Museum of Naples: mosaics from the Villa of Cicero, outside Porta Ercolano bearing the signature of Dioscorides of Samos: (left) women consulting a fortune teller; (right) street musicians

A Comic Scene, in which three actors masked are sitting at a table. In the upper part of the Mosaic is the name of the artist Dioscorides of Samos. Another Comic Scene, by the same hand as the inscription tells us. This was found at Pompeii in the house called the Villa of Cicero, in 1762, and, being the first that had then been discovered, it was the object of universal interest and curiosity. It is a very pleasing composition of four figures; a man playing a tambourine, two women playing, one the cymbals, the other the double pipe, and a boy playing a kind of flageolet. All of them wear masks, which are ornamented with leaves of the most minute and delicate execution. The Mosaic is not formed, as usual, of stones, but of small pieces of glass. Murray
The Villa of Cicero was filled in again in 1763 after the removal of its paintings and mosaics. The reference to Cicero is not supported by evidence, but only by the fact that the brilliant lawyer did mention having a villa at Pompeii, as well as at Tusculum, Formia and several other locations. 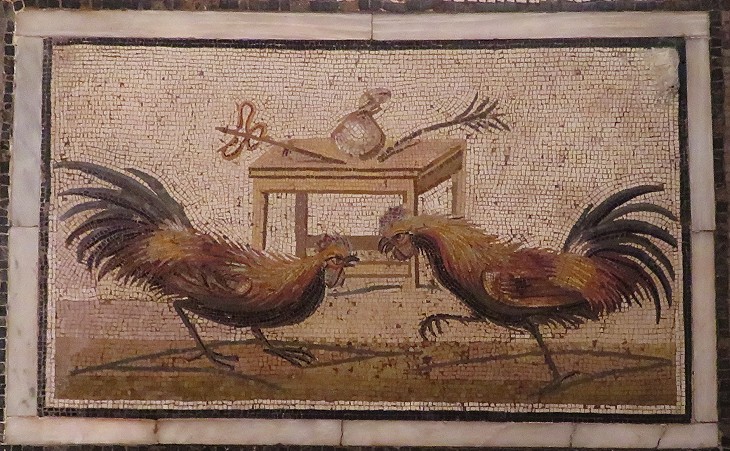 Archaeological Museum of Naples: mosaic from an unknown location depicting a fight between cocks

The cock knows how to distinguish the stars, and marks the different periods of the day, every three hours, by his note. (..) They exercise a rigorous sway over the other birds of their kind, and, in every place where they are kept, hold the supreme command. This, however, is only obtained after repeated battles among themselves, as they are well aware that they have weapons on their legs, produced for that very purpose, as it were, and the contest often ends in the death of both the combatants at the same moment. (..) Some of these birds are reared for nothing but warfare and perpetual combats.
Pliny the Elder - Historia Naturalis - Book X - Translation by John Bostock and Henry Thomas Riley.
Other Roman sources add that people could ruin themselves by betting on cocks. The mosaic was part of the collection of Nicola Santangelo, Minister of Interior of the Kingdom of the Two Sicilies in 1831-1847 and it is likely to have been found at Pompeii or in its environs. It shows also the purse for the winner between a caduceus, a symbol of Mercury meaning wealth, and the palm of victory. It brings to mind a Christian mosaic at Aquileia, where the cock, symbol of light, fights against a tortoise, symbol of darkness. 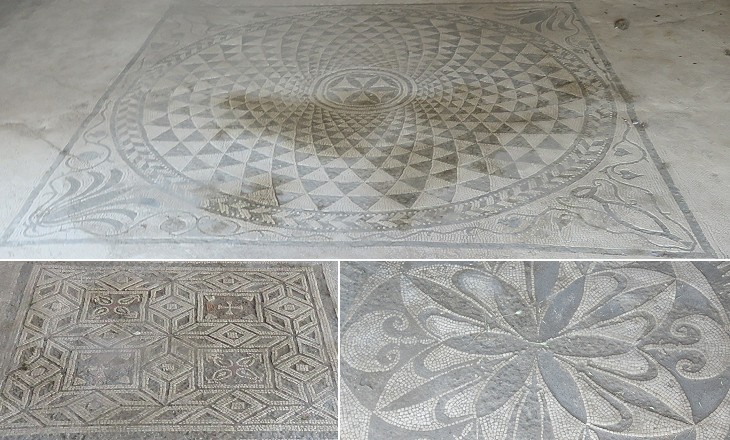 Black and white floor mosaics were very much in fashion in Rome (you may wish to see those at Villa di Livia and at Villa Adriana) and their presence in some houses of Pompeii suggests the landlords were familiar with Roman trends. Occasionally, e.g. in the House of Paquius Proculus, some details were highlighted by coloured tesserae. Optical effects can be seen also at Villa dei Volusii and in many provincial towns outside Italy, e.g. at Cirta (Constantine) in Algeria. 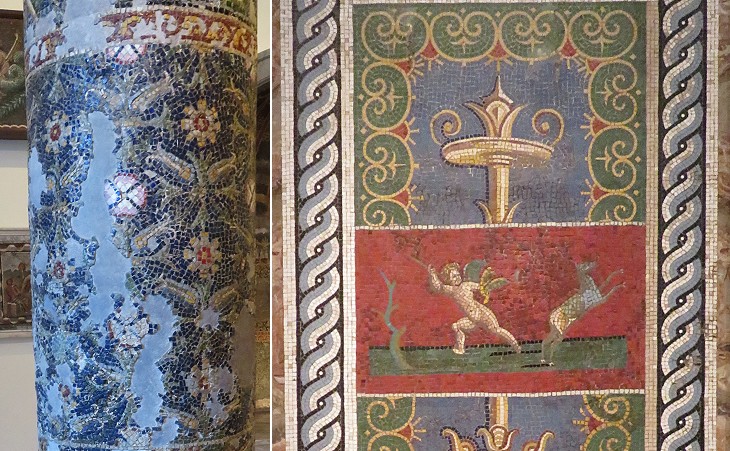 Archaeological Museum of Naples: (left) detail of a column from the House of the Mosaic Columns; (right) wall panel at "Insula Occidentalis"

In a limited number of cases, walls (and in one instance columns) of houses were decorated with coloured glass-paste mosaics. The House of the Mosaic Columns near the Villa of Cicero was described by Murray as a confused mass of ruins, an example of the first archaeological campaigns which were aimed at finding works of art for museums and private collections and often ended up by destroying the remaining evidence of the buildings which housed them. 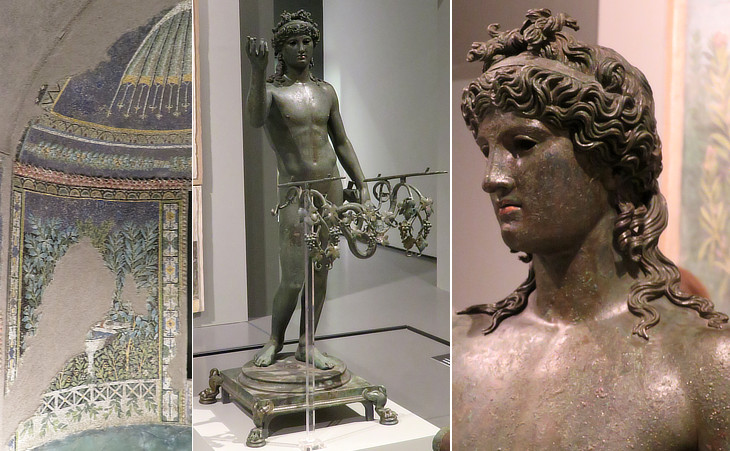 Archaeological Museum of Naples: (left) detail of a niche with a mosaic, similar to those at House of Marcus Lucretius and at Herculaneum; (centre/right) bronze lamp holder

These exhibits come from Insula Occidentalis (western block of houses) which were among the first ones to be excavated: The houses appear to have supplanted the sea wall, and to have extended in some instances to the beach: but as they were filled up when first examined, it is impossible to form any adequate opinion of their character or extent. Murray. They were among the richest houses of Pompeii because of their proximity to the beach, similar to Villa dei Papiri at Herculaneum where an extraordinary amount of bronze statues and decorations was found. The young man portrayed in the bronze lamp holder has the hairstyle of Apollo del Belvedere, but no other symbols referring to the god. The lips are of copper, similar to the Riace Bronzes. It might have been imported from Greece (see a stock of bronze Greek decorative objects which was found in a shipwreck at Mahdia in Tunisia). 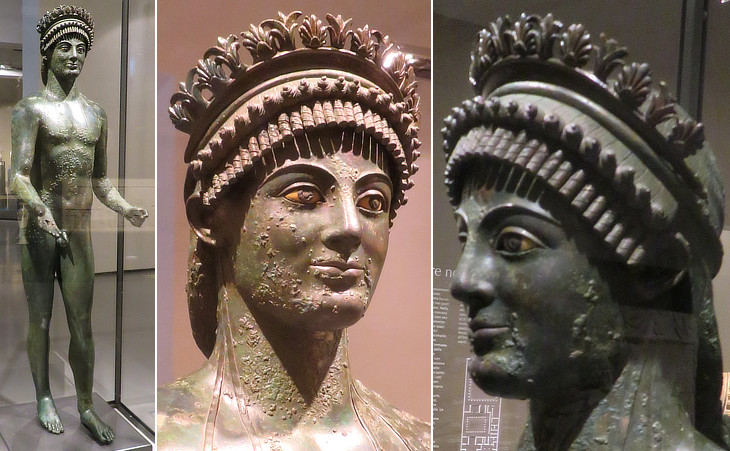 Archaeological Museum of Naples: bronze statue of Apollo utilized as a lampholder (Ist century BC) from the House of Caius Julius Polibius

This lampholder recalls a kouroi, a statue portraying a standing naked young man which goes back to pre-Classic Greece and more specifically later examples which were found in Greek cities in Italy, e.g. at Selinunte and Reggio. You may wish to see some of the many bronze statues which were found at Villa dei Papiri near Herculaneum. 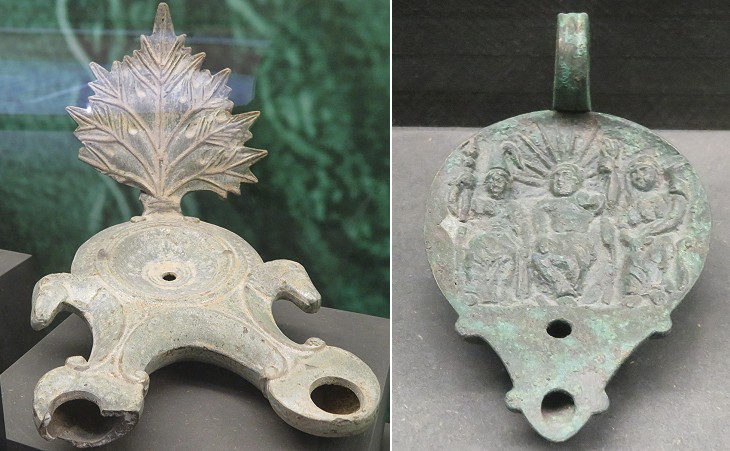 Brussels Art & History Museum: (left) lamp from Pompeii; (right) lamp from the environs of the town and depicting Minerva, Jupiter and Juno, the three gods who were worshipped on the Capitoline Hill of Rome

The image used as background for this page shows a mosaic at the Archaeological Museum of Naples which depicts the statue of a pancratiast.

Move to:
The Town
Temples and Religion
Public Buildings near the Forum
Other Public Buildings
Houses
Paintings
Tombs
The Economy
Villa di Poppea at Oplontis
Pompeii in the 1909 paintings by Alberto Pisa