- Dec. Max. from the Forum to Porta Marina 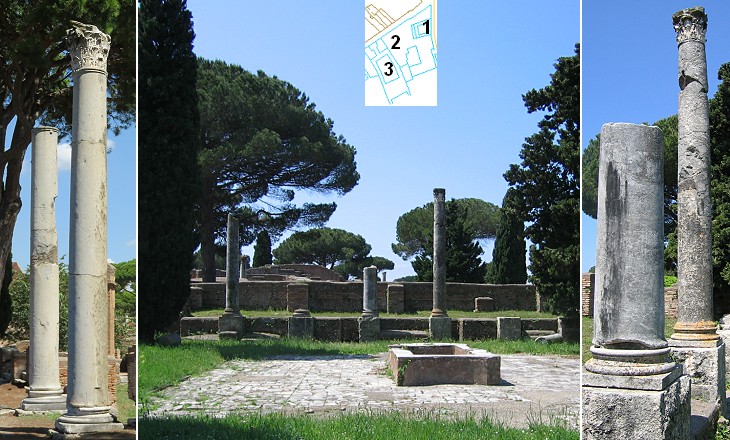 Decumanus Maximus, the main east-west street of Ostia, forked after having crossed the western end of the Forum. Via della Foce, the northern branch, led to the harbour, whereas the southern one (which has retained the name of Decumanus Maximus) reached Porta Marina, the sea gate. The road intersection was a very busy spot and thus a very appropriate location for a macellum, a market where meat and other food were sold. It had a grand entrance on Decumanus Maximus, but the large courtyard which was the heart of the market could be more easily reached from a side street. It had a fountain at its centre and a roofed podium on one side. It might have housed statues of the emperors and mensae ponderariae (tables with standard measures). Archaeologists found an inscription stating that a general restoration of the market occurred in 418-420 at the initiative of Aurelius Anicius Symmachus, praefectus urbi, a magistrate who acted as governor of Rome after the emperors had moved their residence to other cities (e.g. Constantinople, Milan and Ravenna). The inscription indicates that when it was written the local authorities of Ostia were no longer in power. 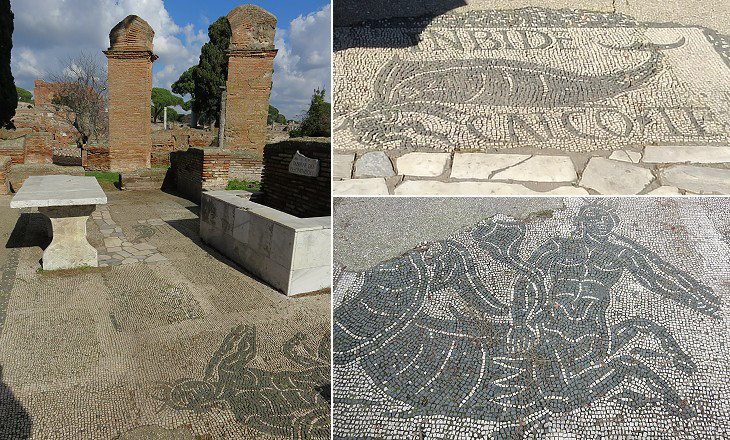 The northern side of the market was occupied by two shops of fishmongers. They both retain a marble table and a small basin where perhaps live fish was kept. Evidence of other similar shops has been found on the opposite side of the street. A floor mosaic depicting a dolphin with an octopus in its beak puzzled archaeologists because of the words Inbide calco te (Envious, I tread on you) around the dolphin. They recall an inscription in another floor mosaic near Terme dell'Invidioso, most likely in a fishmonger shop. They both contain references to envy and are believed to have been written to ward off the evil eye. 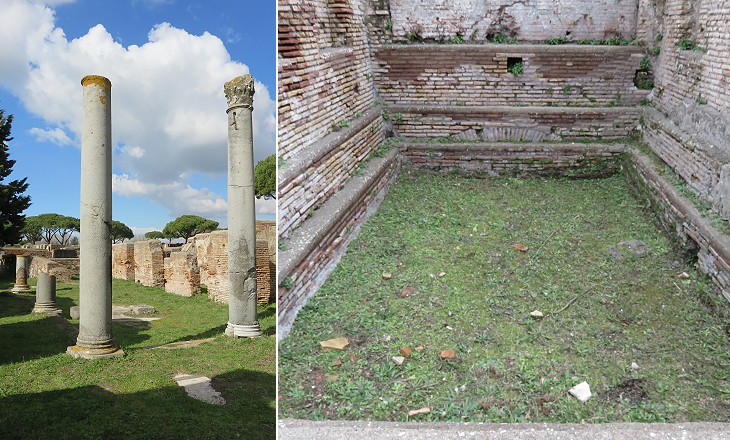 Shops were lined up along Decumanus Maximus with only small passages leading to buildings behind them. Terme delle Sei Colonne had a narrow entrance on the main street which led to a courtyard with six high columns. The space of the courtyard might have been used as a palaestra for exercising. The baths were installed between existing buildings, a fact which conditioned their layout. The hot/warm/cold rooms were crammed in a small area at the southern end of the complex. 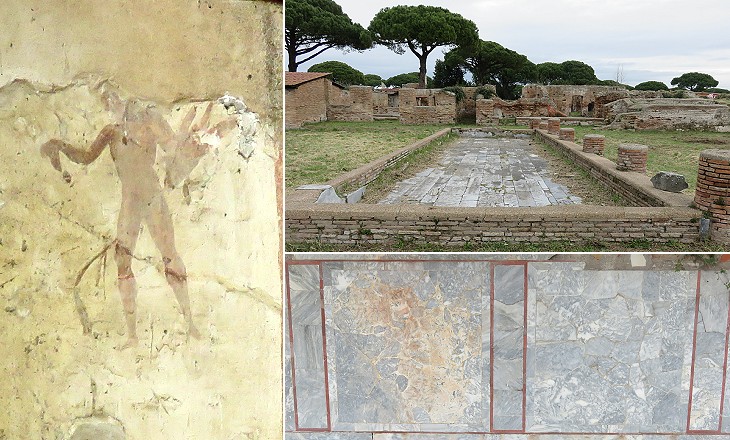 Narrow streets led from Decumanus Maximus to buildings near Terme delle Sei Colonne. They were small domus (houses) which were built in different periods. Eventually archaeologists found evidence of the atrium of a Ist century BC house. One of the rooms adjoining the atrium was embellished with a marble floor at the time of Emperor Augustus. 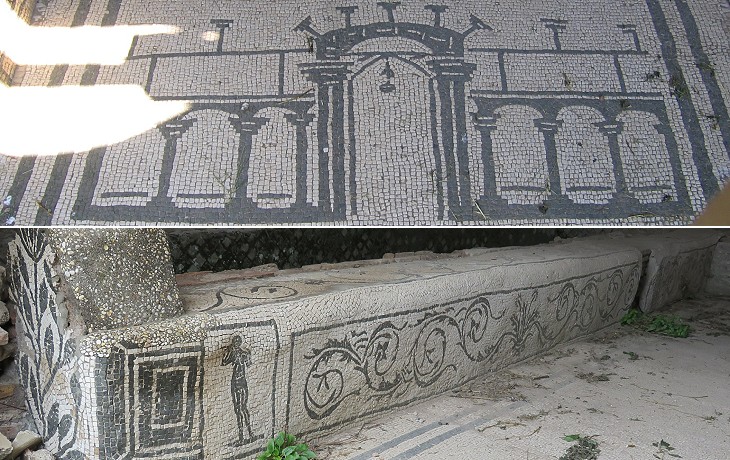 Mitreo delle Sette Porte (Seven Gates): (above) floor mosaic at the entrance; (below) mosaic of the left bench showing Venus Anadyomene (rising from the sea)

A mithraeum was installed in ca 160-170 AD inside a storeroom of an isolated warehouse behind Terme delle Sei Colonne. Today it is at the edge of the excavated area and it is not evident from where the believers accessed it, because there is no street leading there from Decumanus Maximus. It is named after the floor mosaic at its entrance which shows seven gates, a reference to the seven grades of initiation of Mithra's cult.

Mitreo delle Sette Porte: (left) overall view; (below) mosaic of the right bench showing Mars and the lower part of Cautes or Cautopates, two torch bearers who were very often depicted in "mithraea"

Mitreo delle Sette Porte is one of the earliest mithraea found at Ostia and its decoration includes depictions of Venus and Mars, gods who had a major role in the foundation of Rome. The cult of Mithra originated from the eastern provinces of the Empire and from Persia. It was extraneous to the traditional Roman religion. The depiction of Venus and Mars was perhaps an attempt by the worshippers of Mithra at Ostia to show that their beliefs had points in common with the traditional ones. The grades of initiation had astronomical references which included the planets Venus and Mars. Schola del Traiano: (left) column on Decumanus Maximus; (right) peristyle and a banquet hall behind it

Guilds played a major role in the organization of economic activities in ancient Rome. All those who earned their living from their work (manual, entrepreneurial or professional) had to join a recognized guild. These institutions were a two-way channel of communication between the political power and the active element of society. The guilds could voice needs and fears of their members and the government could give orders to the collegia, the official bodies of the guilds.
Schola del Traiano was the imposing seat of a major guild. It stood opposite Tempio dei Fabri Navales, a temple built by the ship carpenters and perhaps it belonged to that guild. 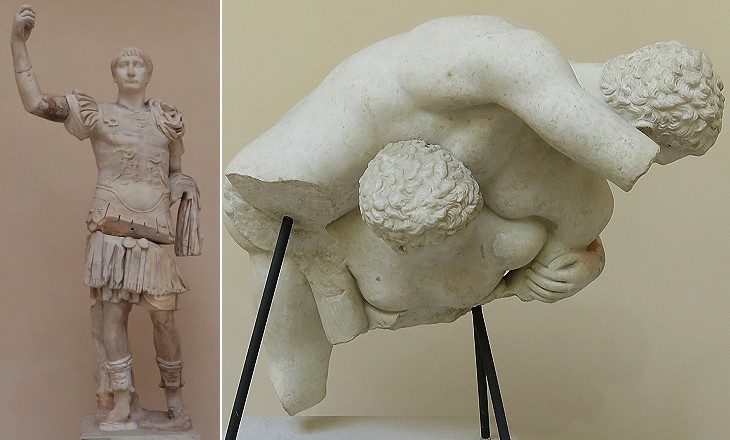 The complex was built at the time of Emperor Antoninus Pius. The members of the guild erected a large statue of Emperor Trajan inside a banqueting hall as a sign of their loyalty to the imperial power. Many broken statues were found inside the building. That showing two wrestlers is a Roman copy of a IIIrd century BC lost bronze original, perhaps from Pergamum. 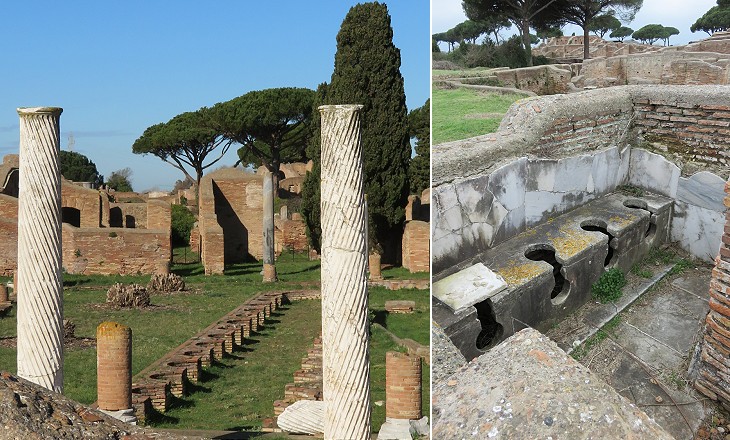 Schola del Traiano: (left) columns at the end of the peristyle; (right) latrine

The monumental entrance on Decumanus Maximus, the very long fountain in the peristyle, elaborate columns, statues and even the marble facing of the latrine are all elements pointing to a particularly rich guild. In the early IVth century changes were made to the complex which indicate it had lost its initial purpose and part of the peristyle was used to build some small rooms. 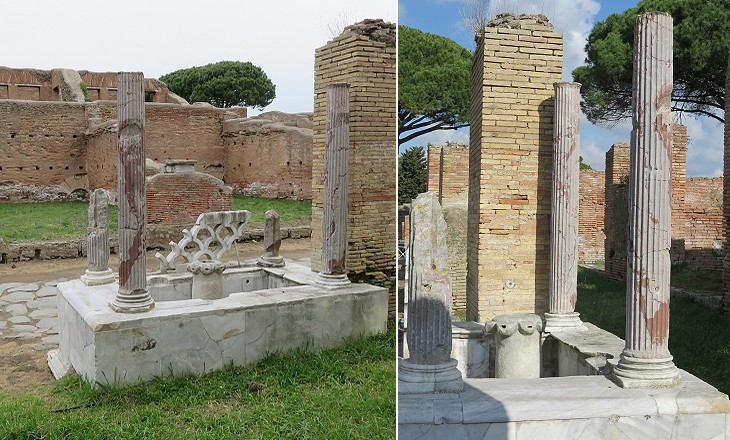 A long roofed portico (120 m/131 yd) housing shops and taverns occupied the last section of the southern side of Decumanus Maximus. It was built at the time of Emperor Hadrian and it was embellished with a small fountain having an unusual design. Water came out from a marble oil lamp with seven spouts. The fountain was protected by a marble railing on the street side, perhaps to prevent donkeys and horses from using it as a trough. The image used as background for this page shows a detail of the railing. 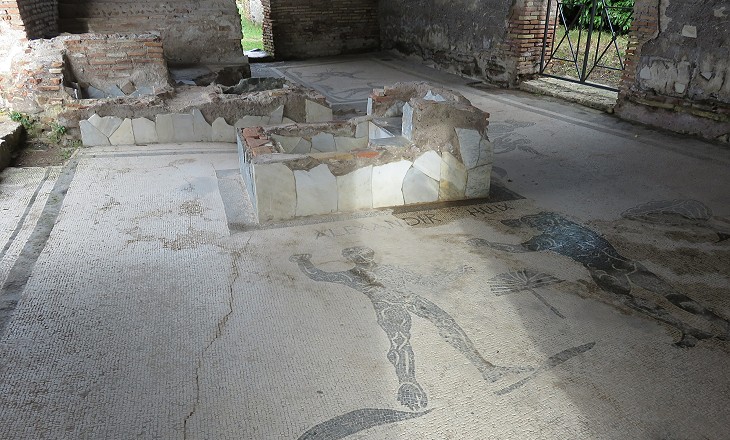 In the early IIIrd century AD a large caupona was installed in a former shop near the site of Porta Marina (which had been razed to the ground in the Ist century AD). It is named after a floor mosaic portraying Alexander and Helix, two "pancratiasts". The tavern had a back room which, because of some puzzling subjects of the floor mosaics, has led some archaeologists to believe it was used for prostitution.

National Archaeological Museum of Athens: detail of a relief of a gravestone found in the Keramikos cemetery: it depicts two "pancratiasts" and a referee with a stick

Greek Pankration means "all (types of) might" and the two athletes involved in a pankration fight could use almost all means to overcome their opponent (a referee controlled that they did not bite or attacked the opponent's eyes). In 648 BC this fight was introduced in the Olympic Games and eventually from Greece it passed to Rome. Alexander and Helix have been identified in athletes who were very popular at the time of Emperor Heliogabalus. You may wish to see an impressive bronze statue of an old pancratiast which was found in Rome in 1885. 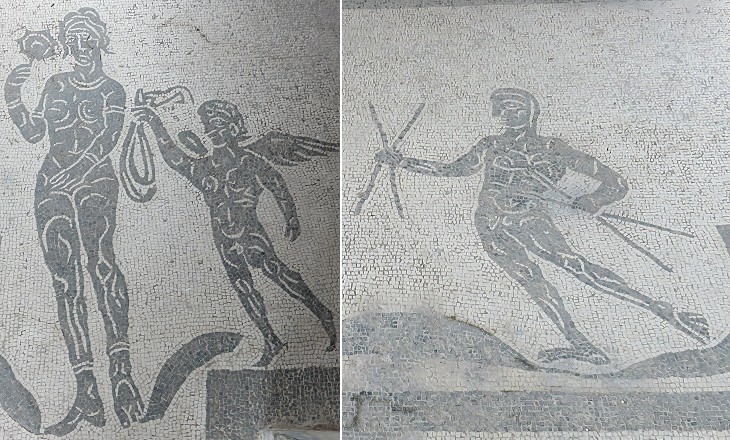 "Caupona" di Alexander e Helix: floor mosaics portraying: (left) Venus and Cupid; (right) a dancer. These mosaics have been regarded as evidence of prostitution occurring in the back room