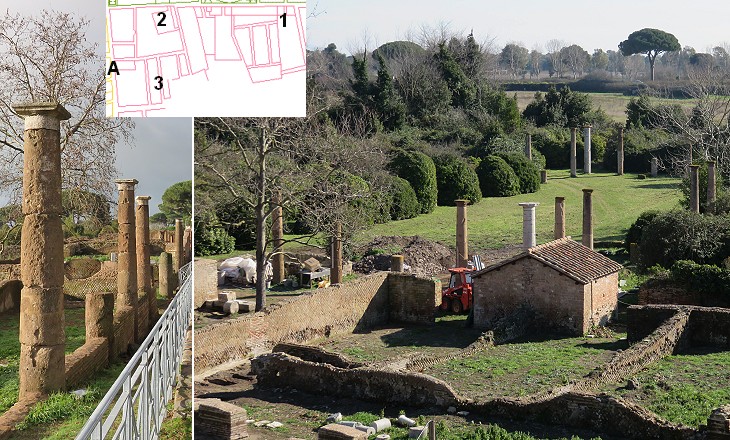 Horrea were public warehouses, in most cases granaries. Those at the river harbour of Rome had a gigantic size in order to store enough supplies of grain, olive oil, wine, etc. to meet the demand of the population for months, if not years. 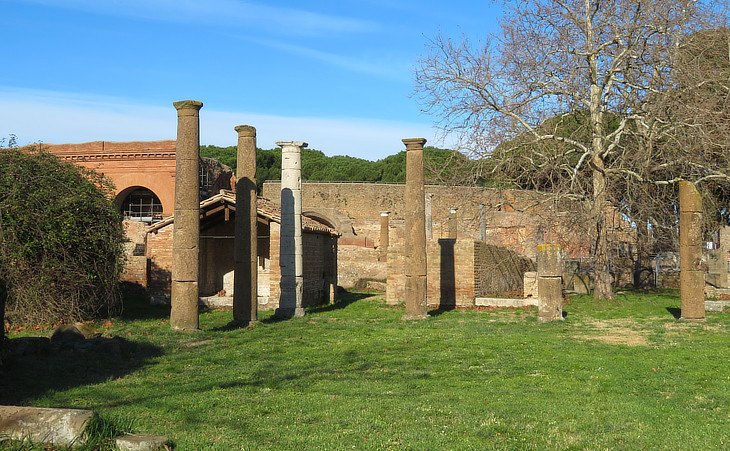 Horrea di Ortensio were built in the early Ist century AD, but their small warehouses might have been turned into shops at a later period. The layout of the complex which has a very large courtyard suggests it could have been a marketplace. Most of the columns were made up of tufo drums with travertine capitals similar to those found at Area Sacra di Largo Argentina in Rome. 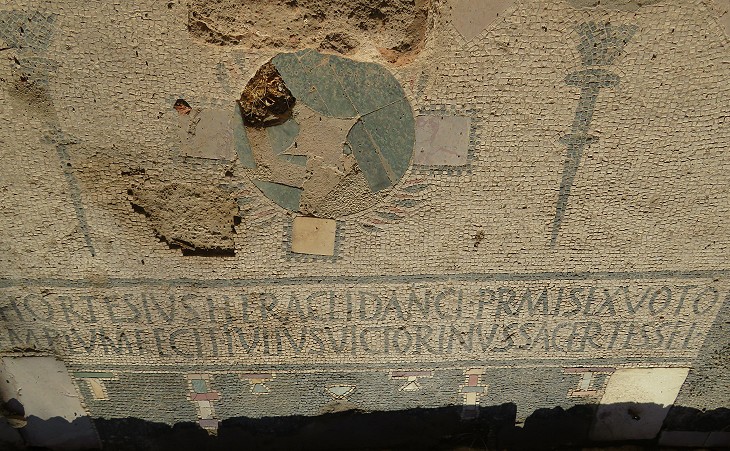 Mosaic inscription inside the shrine

The site was named after L. Hortensius Heraclida, a commander of the military fleet which was stationed at Cape Miseno in the Gulf of Naples, who built a small shrine in the courtyard. The fleet was also in charge of policing the harbour of Ostia and some of its sailors manoeuvred the velarium of Colosseo. 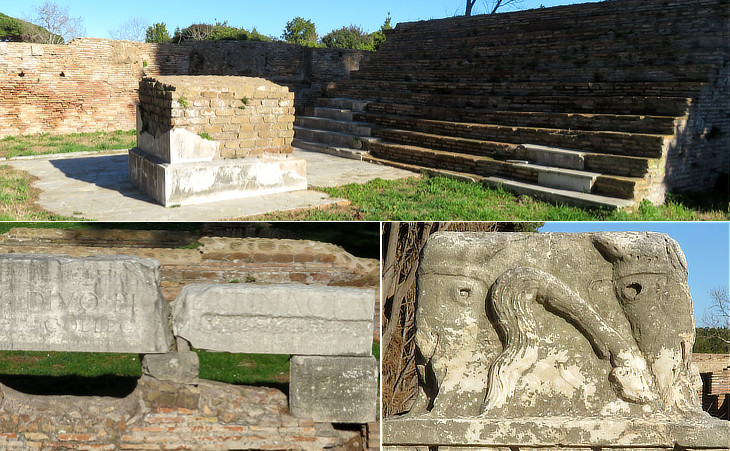 Tempio Collegiale: (above) the site of the temple; (below-left) inscription celebrating the deified Emperor Pertinax; (below-right) fragment of a lintel with a frieze of "bucrania"

This temple was built by the Collegium (guild) of the Fabri Tignarii (woodworkers) and it was most likely dedicated to Mars. The Fabri Navales (ship carpenters) had their guild on the northern side of Decumanus Maximus. The Latin word faber means maker (Faber est suae quisque fortunae - Every man is the maker of his own fortune) and it was usually followed by an adjective which specified the material he worked (aerarius gold, argentarius silver, tignarius wood, ferrarius iron, etc.). 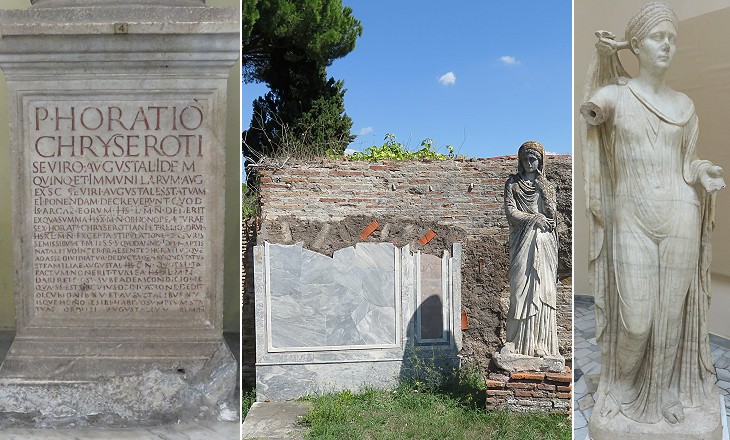 The assumed seat of Seviri Augustales, a college of six magistrates (sex viri) stood very near Tempio Collegiale. Its members were chosen among the wealthiest freedmen of the town and they had a role in the organization and financing of ceremonies in honour of the emperors. Eight statues of emperors or of their wives were found in the building and this led to the belief that it had been the seat of the Seviri Augustales. The current opinion is that it was the seat of an unknown guild and that the statues were parts of unrelated funerary monuments. Most likely they were about to be calcined in a nearby lime kiln and they were temporarily stored in the building.
The image used as background for this page shows the head of another statue which was found at Sede degli Augustali (now at Museo di Ostia Antica). It is supposed to portray Maxentius as Pontifex Maximus. 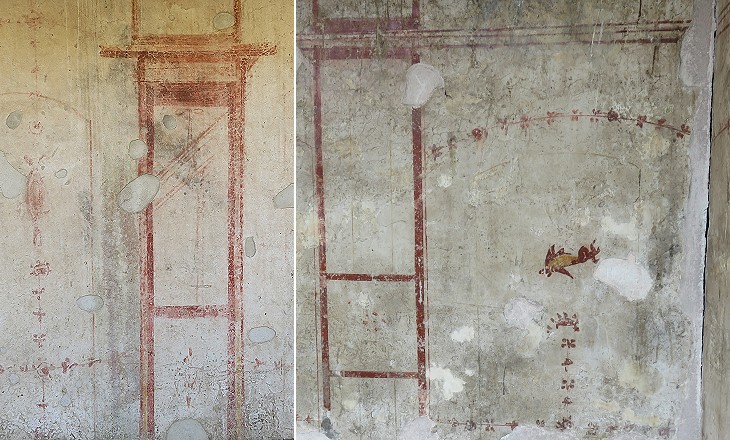 The buildings having their entrances on Decumanus Maximus were usually temples, guild seats, baths, marketplaces, etc. The alleys which branched off the main street led to other types of buildings. Some of them had a residential purpose and others a manufacturing one. Caseggiato is the Italian word used to indicate a block of apartments. Those behind Tempio Collegiale had shops on the ground floor. Some rooms retain parts of their frescoes which depicted architectural frames on a very light background. This sort of decoration had the effect of "enlarging" the space of the rooms and it was widely used at Ostia and in Rome (e.g. at Augustus' House on the Palatine Hill). 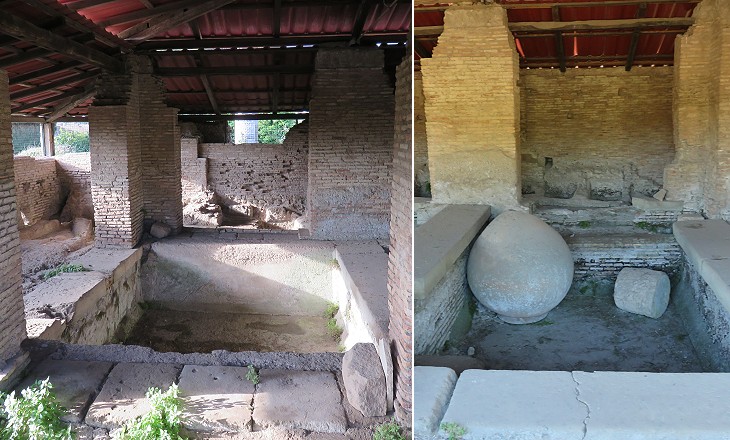 Tam male Thais olet, quam non fullonis avari testa
(Thais smells worse than the clay pot of a greedy cloth-fuller)
Martial - Epigrams - Book VI - 93
At the time of Emperor Marcus Aurelius the residents of the street behind Sede degli Augustali learned that a fullonica was going to be installed next to their homes. At that time they did not know anything about "NIMBY" actions, yet they most likely opposed the new business being authorized. Clothes were cleaned by using fermented urine and sulphur in addition to special clays. They were placed in small vessels and the workers "jumped" on them with their feet. The large basins were used to remove the detergents. Archaeologists do not agree whether wool garments were actually made in the fullonica of Ostia, similar to what occurred at Pompeii (you may wish to see fullers in action in a fresco found at Pompeii - it opens in another window). A very small, but lavishly decorated house stood right opposite the fullonica. Its landlords most likely kept doors and windows closed to prevent the smell and the noise from the workshop entering their rooms (or perhaps the house was built after the fullonica had ceased to operate). 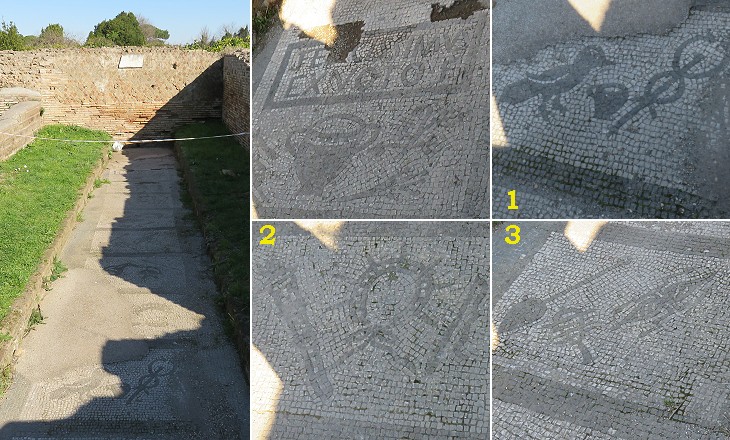 Many mithraea have been found at Ostia. Some of them seem to have been a sort of private "chapel" inside houses. This mithraeum instead was accessed from the street, one which must have been rather busy, because in addition to housing the fullonica it led to a bath establishment. It was built by Felicissimus and its floor mosaic shows symbols of the seven grades of initiation, starting with the Raven, the lowest one. The decoration of the mithraea interiors has been a key source of information on the cult of Mithra. Unfortunately very rarely have their façades been found in their entirety, so we do not know whether their decoration hinted at the purpose of the building or not. 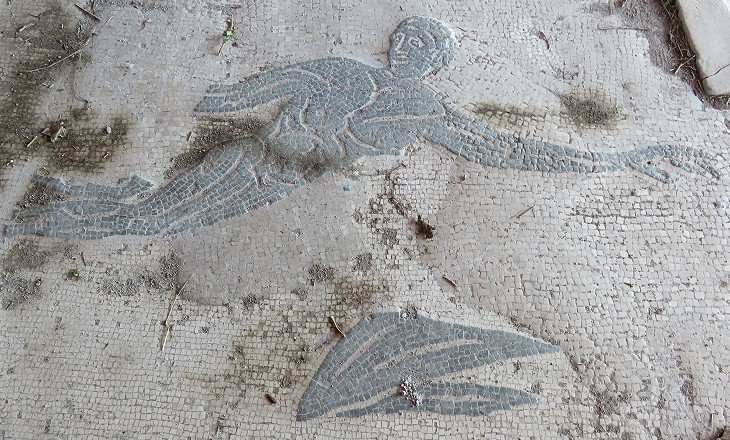 Terme del Nuotatore was a rather large bath establishment which was built at the time of Emperor Domitian. Already by the first half of the IIIrd century it was abandoned and afterwards it was used as a source of building material and for dumping garbage. This explains why archaeologists have been able to find only the lower parts of some halls and scanty remains of their decoration. 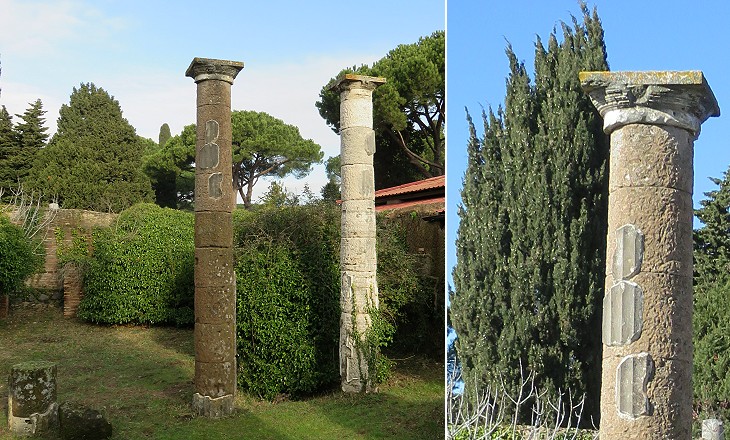 Domus dei Capitelli di Stucco is one of the oldest detached houses found at Ostia and it is dated IInd century BC. It was redesigned after the construction of Sede degli Augustali in its northern section when it lost its entrance on Decumanus Maximus. At one point the columns of its peristyle, which were made up of tufo drums, similar to those of Horrea di Ortensio, were faced with stucco in an attempt to give them a marble appearance. 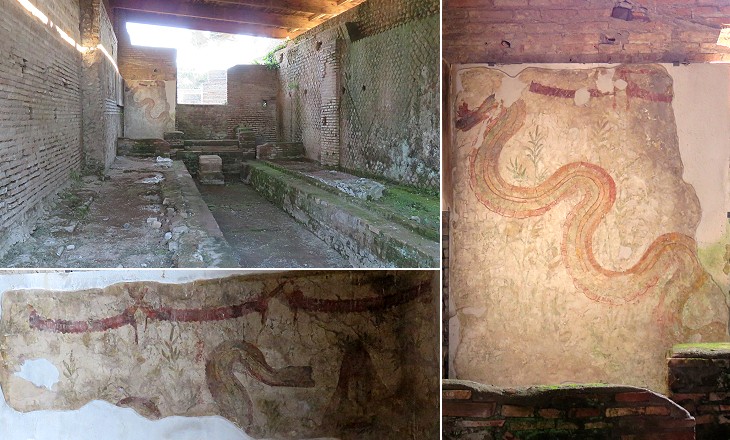 This mithraeum was installed in ca 250 in a previous building which was rather hidden among a group of apartment blocks. Its walls are decorated with frescoes depicting some large snakes. These were probably painted before the building was turned into a mithraeum, but they were left because a snake (perhaps representing the constellation Hydra) has a role in the slaying of the bull by Mithra. According to the traditional Roman beliefs snakes were symbols of Genius Loci, the deity protecting a location and Virgil described one of them as the custodian of Anchises', Aeneas' father, tomb. The fired bricks which were used at Ostia were very often marked with the brand of their manufacturer. Archaeologists have been able to date rather precisely the walls of most buildings thanks to the brands and other features of their bricks. Caseggiato dei Lottatori shows evidence of many changes which were made to its initial layout of the early IInd century AD. It might have been another guild seat.