Porto
(a detail of G. Vasi's Grand View of Rome)

At the end of the Carthaginian wars (146 BC), Rome acquired two provinces (Sicily and Africa, then the name of today's Tunisia) which were great producers of grain. The most important Roman families acquired large estates in these provinces and at the same time through their control of the Senate they ordered frumentationes, free distributions of grain to the inhabitants of Rome.
Frumentationes became a common practice: Emperor Augustus wrote in Res Gestae Divi Augusti, a summary of his achievements: (..) consul undecimum duodecim frumentationes frumento pr[i]vatim coempto emensus sum. (..) Ab eo anno q]uo Cn. et P. Lentuli c[ons]ules fuerunt, cum deficerent [vecti]g[alia, tum] centum millibus h[omi]num, tum pluribus multo frume[ntarios et n]umma[rio]s t[ributus ex horr]eo et patr[i]monio m[e]o edidi. (..) "In my eleventh consulship I made twelve distributions of food from grain bought at my own expense. (..) Beginning with the year in which Gnaeus and Publius Lentulus were consuls, whenever taxes were in arrears, I furnished from my own purse and my own patrimony tickets for grain and money, sometimes to a hundred thousand persons, sometimes to many more." Translation by Frederick W. Shipley.
Because of the growth of the population of Rome, which is generally thought to have exceeded one million inhabitants at its peak, grain supply required complex logistics. 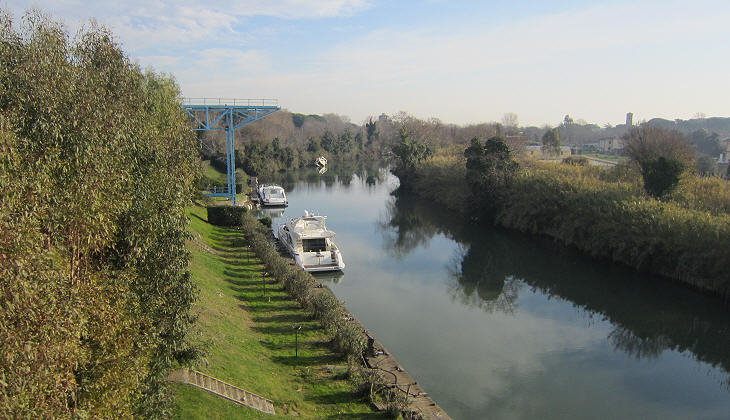 Ostia, the harbour of Rome at the mouth of the River Tiber became so important that Marius and Silla fought for its possession as they considered it a key factor for controlling the course of events in Rome. After the conquest of Egypt, another large supplier of crops, Emperor Augustus considered the creation of a second harbour because Ostia was affected by silting caused by floods.
Augustus' plan was implemented by Emperor Claudius and completed by Emperor Nero in 62 AD. Portus Augusti, the new harbour, was located two miles north of Ostia and it was linked to the Tiber by a canal. 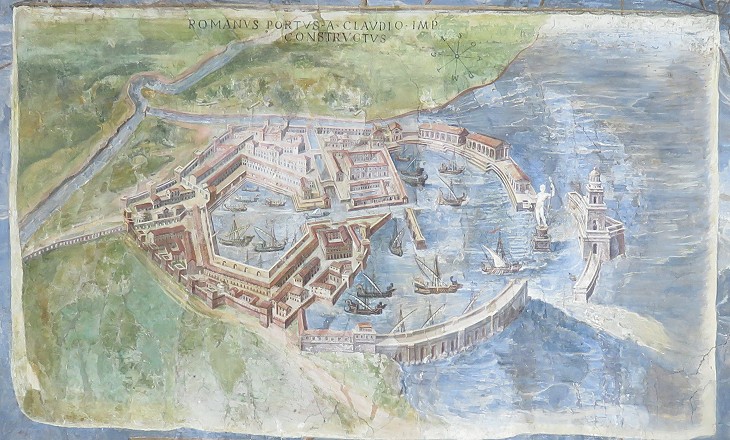 Ancient Porto in a fresco at Galleria delle Mappe Geografiche in the corridors of Palazzo del Belvedere in Rome. The painting was based on a 1554 drawing by Pirro Ligorio

The new harbour did not provide enough protection to ships during extreme weather conditions and Tacitus (Annals - XV - 18) reports that "about two hundred ships were destroyed in the very harbour by a violent storm". In 103 Emperor Trajan decided to make it safer by digging a new inner basin having a perfectly hexagonal shape (Portus Traiani). The basin was surrounded by warehouses and granaries which were built according to advanced masonry standards aimed at ensuring appropriate ventilation and temperature to the stocked goods (see a page on Roman construction techniques). The image used as background for this page shows a side of a coin celebrating the construction of the new basin. 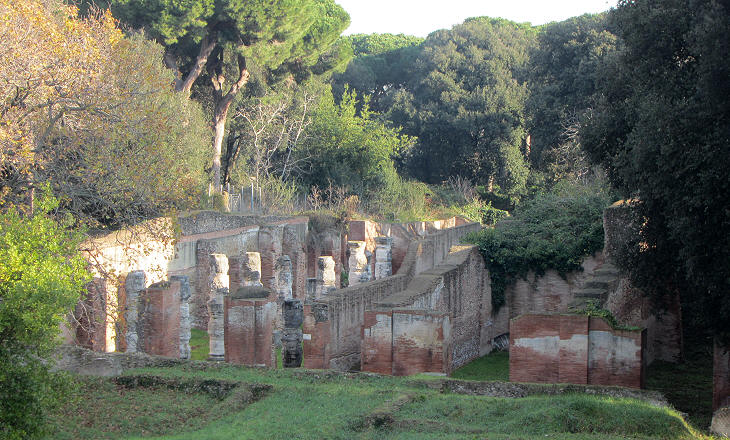 "Portico di Claudio", a large warehouse near the outer basin of the harbour

Pliny the Younger celebrated this and other public works promoted by Trajan (e.g. new harbour facilities at Ancona and Civitavecchia) by these words (..) auctoritate, consilio, fide reclusit vias, portus patefecit, itinera terris, litoribus mare, litora mari reddidit, diversasque gentes ita commercio miscuit, ut, quod genitum esset usquam, id apud omnes natum esse videretur. "[Trajan] in his wisdom and authority and devotion to the people has opened roads, built harbours, created routes overland, let the sea into the shore and moved the shore out to sea, and linked far distant peoples by trade so that natural products in any place now seem to belong to all." (Panegyricus XXIX - translation by Betty Radice).
It is interesting to note that Hugo Grotius in Mare Liberum (The Free Sea), a pamphlet written in 1609 and advocating the Dutch right to trade in the East Indies, made reference to the benefit of trade for the community by quoting this sentence by Pliny. 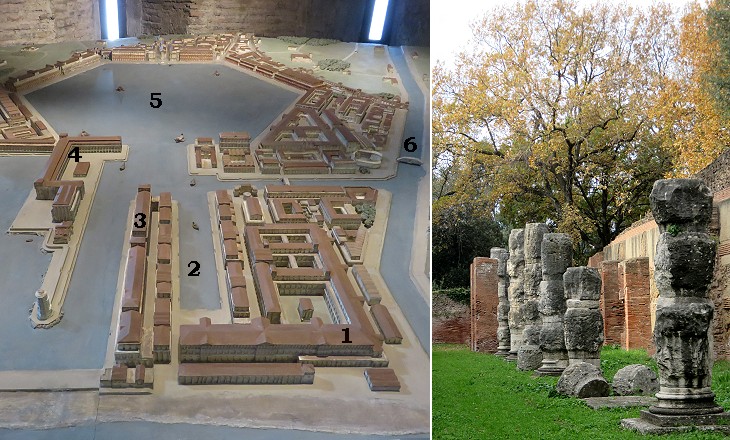 The portico is named after Emperor Claudius because the design of its travertine columns recalls those at Porta Maggiore and Tempio di Claudio which were built by that emperor. The analysis of the masonry of the walls has led archaeologists to believe that the portico was part of warehouses of the time of Emperor Trajan. The columns perhaps came from an earlier building. 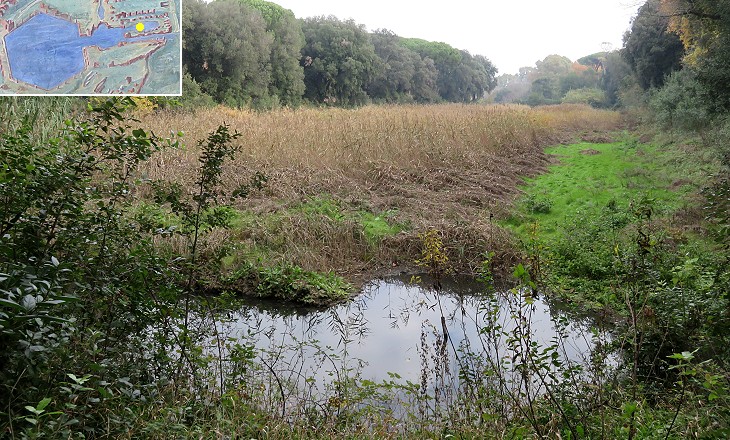 Darsena; (inset) 1582 fresco showing Porto at that time: the yellow dot shows the location of the darsena

It. darsena means an inner, very repaired dockyard and archaeologists have used it for a long rectangular basin which was flanked by warehouses. It was linked to the inner hexagonal basin and to the canal. It is likely that it was used for unloading goods from sea ships and moving them to barges which reached the river harbour of Rome via the canal and the Tiber. 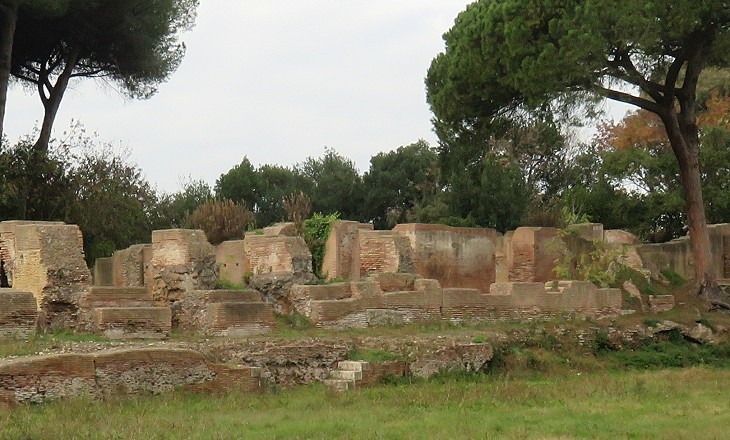 These large warehouses bordered on the northern side of darsena and their front stood opposite the entrance to the hexagonal harbour. Archaeologists have unearthed the quay which had a few steps at each mooring berth for facilitating manouevres. 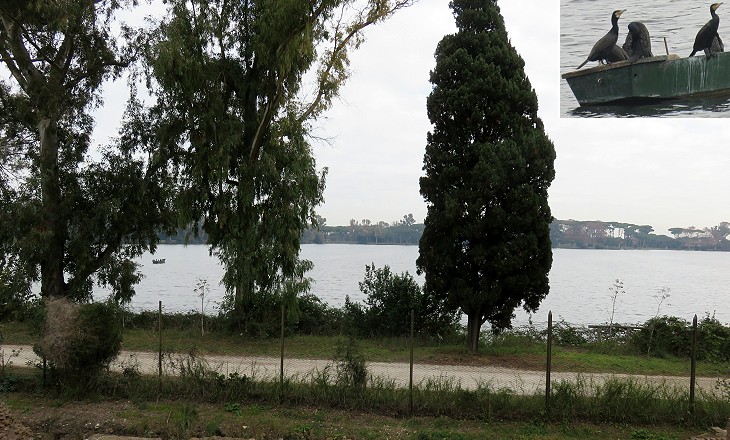 The whole area where the ancient harbour stood was bought in 1856 by the Torlonia, a rich family of bankers. Their estate included a large area to the north of the harbour where in the 1950s the airport of Roma Fiumicino (FCO) was built. The hexagonal basin is a private property of the Sforza Cesarini who inherited it from the Torlonia. Its current quays are ten feet higher than the original ones. 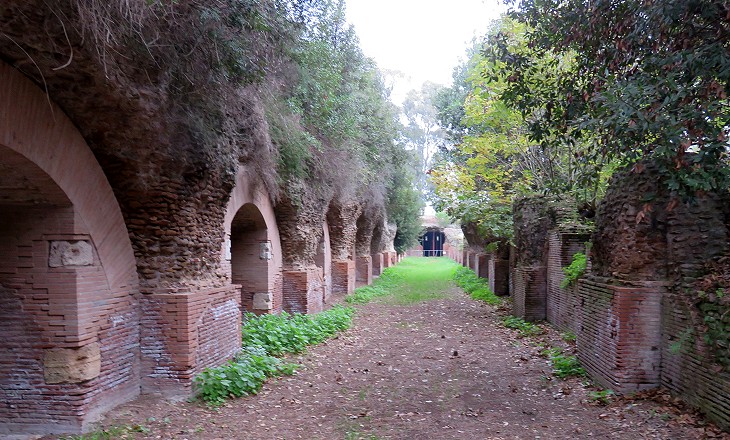 Other warehouses were built by Emperors Hadrian and Antoninus Pius along the entrance to the hexagonal basin and along two sides of it. They were modified at the time of Emperor Septimius Severus, after whom they are named. The entrances to each warehouse show small travertine blocks; these were used to insert logs which locked the doors, similar to what can be seen at Horrea Epagathiana in Ostia. (above) "Terrazza di Traiano"; (below-left) floor mosaics of baths which were being restored in December 2015 near the harbour of Claudius; (below-right) Christian basilica

We know that ancient travellers who had to board their ship at Porto waited for the departure in inns at Ostia. That might not have applied to persons of high rank for whom a palace was built to the north of Magazzini Severiani. The Torlonia enriched their collection of antiquities with works of art which they found at Porto and which presumably embellished that residence. The most evident remain of that building is a series of arches; they supported a balcony which ran along its southern front.
The harbour of Claudius was closed by an artificial islet upon which a tall lighthouse stood. It was called Pharos, similar to the (lost) lighthouse of Alexandria. It was depicted in many mosaics (you may wish to see it in a mosaic at the Great Necropolis).
During the IVth century the decline of trading activities at Porto led to turning some warehouses into residential buildings. In the Vth century one of these buildings was given the shape of a basilica in order to use it as a church, most likely as the cathedral of the town. A hexagonal baptismal font was added in the VIIIth century, perhaps to replace an external baptistery. The basilica had columns which were eventually utilized at Episcopio, the medieval fortified residence of the Bishops of Porto. The new harbour was very close to Ostia and at least initially those who worked at Porto lived at Ostia, where new residential neighbourhoods were built. Maritime agents continued to do business in that town where they had their offices. 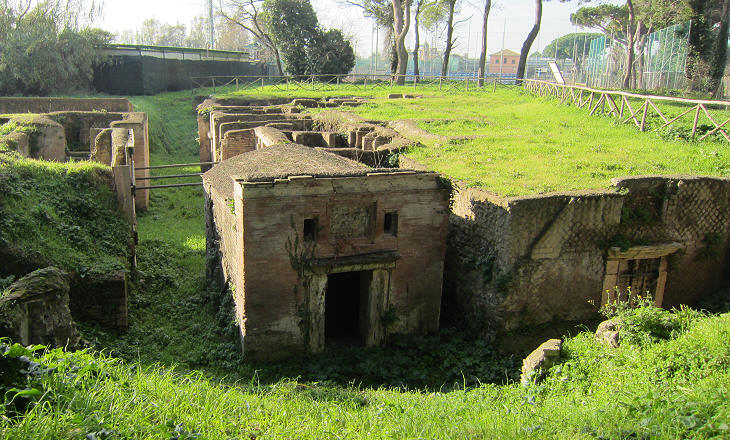 Gradually a new town developed between the new harbour and the canal and its inhabitants began to build tombs on the other side of the canal. Necropolis means city of the dead and the word perfectly describes a series of tombs which were unearthed in 1938. They are very similar to houses and are neatly aligned along Via Severiana, the road which linked Porto with Ostia and other towns along the coast. Most of them were built between the time of Emperor Trajan and that of Emperor Septimius Severus, approximately 100 years during which trade within the Roman Empire reached its peak. This necropolis is described in detail in a separate page. 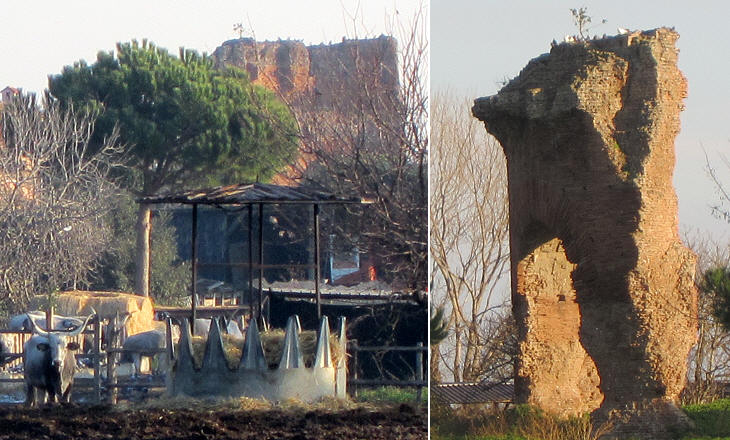 Portunus was a minor god to whom the Romans dedicated a small temple at Velabro, the site of the first river harbour of Rome. The ruins of a IIIrd century circular building along Via Portuense are thought to belong to a Temple to Portunus, but they might instead be part of a mausoleum, similar to Tomba di Gallieno along Via Appia Antica. 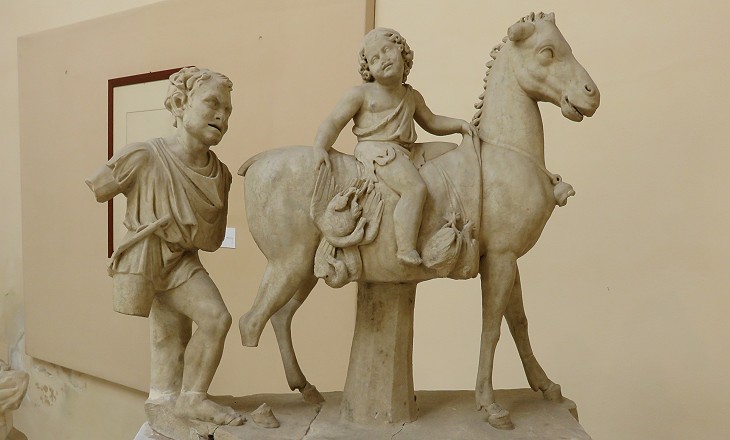 The works of art found in the tombs of Porto testify to the wealth and tastes of its citizens. They were not members of the military or political establishments and they appreciated small "pretty" objects which did not have a symbolic meaning. Museo di Ostia Antica: relief depicting two workers at a marble workshop: one of them holds a special saw for cutting marble. A broken jar contained a mixture of sand and water which was used as an abrasive powder to enlarge and deepen the initial scores made by hand on the marble surface

The decoration of many tombs included small reliefs depicting the trade of the dead. They are very realistic and are accompanied by the depiction of tools, thus providing an illustrated catalogue of how some activities were performed in antiquity. 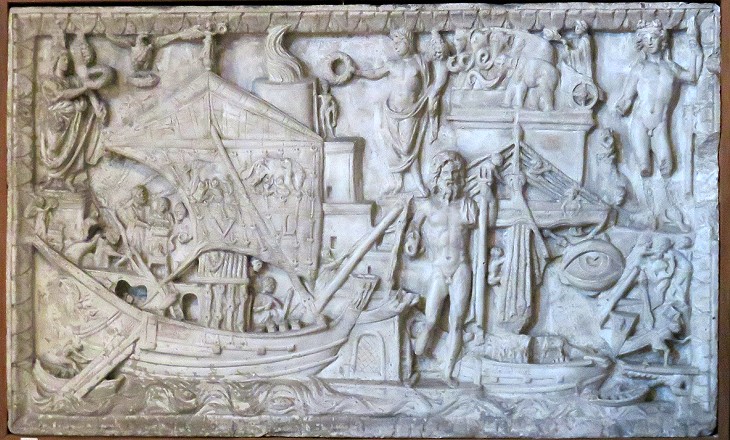 Museo della Via Ostiense a Porta S. Paolo: cast of a relief belonging to the Torlonia. It was found in 1864 near the palace. It shows a merchant ship entering the harbour and another one which is being unloaded. The Neptune at the centre of the relief is believed to be a symbol of the sea. The depictions of other statues, of a triumphal arch and of the lighthouse are most likely true to life, although not to scale

Move to the Great Necropolis or to Medieval Porto and Modern Fiumicino.