SS. Giovanni e Paolo
(Vasi at work in the Grand View of Rome)

Links to this page can be found in Book 3, Map B3, Day 1, View C9 and Rione Campitelli. 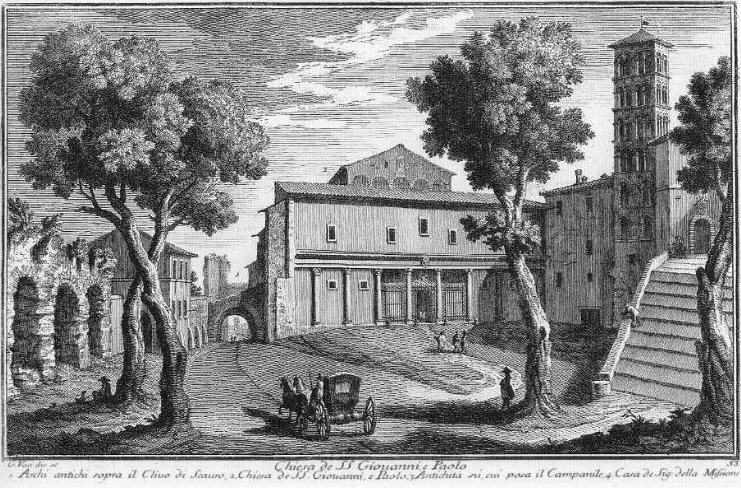 In Vasi's time this area of the Caelian Hill was scarcely populated, so in the plate we see just one carriage and few passers-by. It was not so at the time of ancient Rome because: a) the row of arches on the very left of the plate housed inns and shops; b) the bell tower and the monastery on the right side of the plate stand on the large artificial terrace of a temple to Emperor Claudius; c) ancient houses have been found under the church; d) the neighbourhood was supplied with water by an aqueduct. Vasi showed the rear of the church with a fine Romanesque apse in a plate which he published in 1756.
The view is taken from the green dot in the small 1748 map here below. In the description below the plate Vasi made reference to: 1) Arches above Clivo di Scauro; 2) SS. Giovanni e Paolo; 3) Roman foundations of the bell tower; 4) Entrance to the adjoining monastery. The small map shows also 5) Tempio di Claudio. 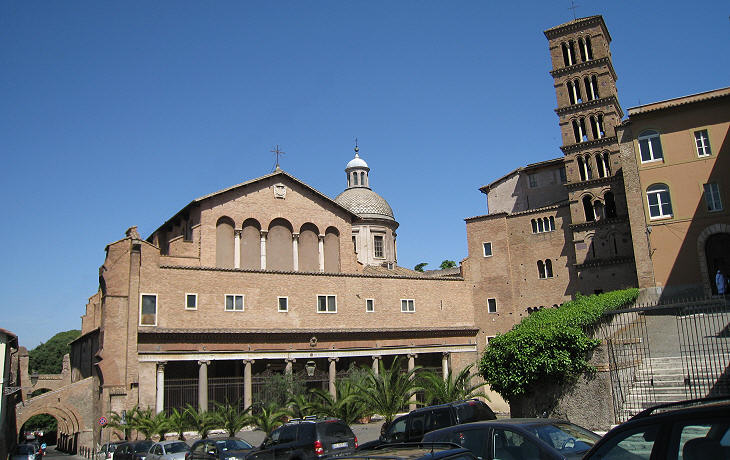 The major change is due to the dome covering Cappella di S. Paolo della Croce, an added chapel which was built in 1857-1880; the façade of the church shows a series of modifications made in 1950-1952 to enhance its medieval aspect. Having said that, and taking no notice of the parked cars, what Henry James wrote in 1873 still applies today:
The place always seems to me the perfection of an out-of-the-way corner - a place you would think twice before telling people about, lest you should find them there the next time you were to go. It is such a group of objects, singly and in their happy combination, as one must come to Rome to find at one's house door; but what makes it peculiarly a picture is the beautiful dark red campanile of the church, which stands embedded in the mass of the convent. (read more of James' account of his visit). 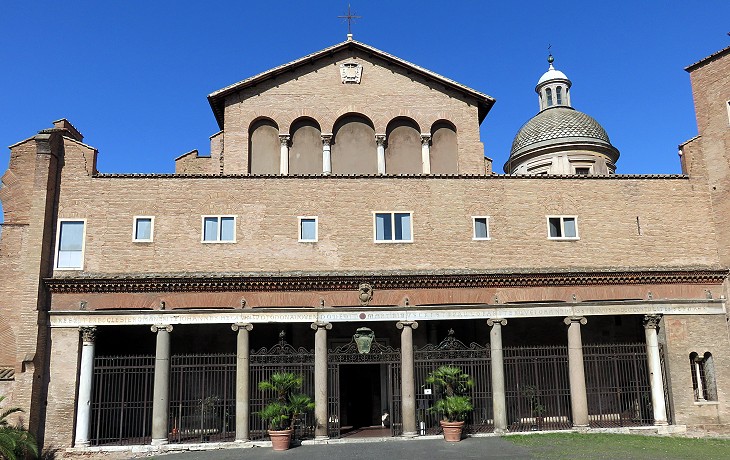 The history of the church and of the two saints to whom it is dedicated goes back to the IVth century; according to tradition John and Paul, two veterans, were put to death during the reign of Emperor Julian, because they refused to worship the pagan gods; however historians claim that the Emperor did not persecute the Christians in the western part of the Empire and that the devotion to John and Paul was based on accounts related to other martyrs. In the Vth century a basilica was built on the site of their assumed martyrdom.
The original façade was crowned by a small loggia with five openings; the portico was added in ca 1150 and in the following century a gallery was built upon it. Until 1952 it impaired the view of the loggia and for this reason it was lowered (you may wish to see the building as it appeared in a 1588 Guide to Rome). 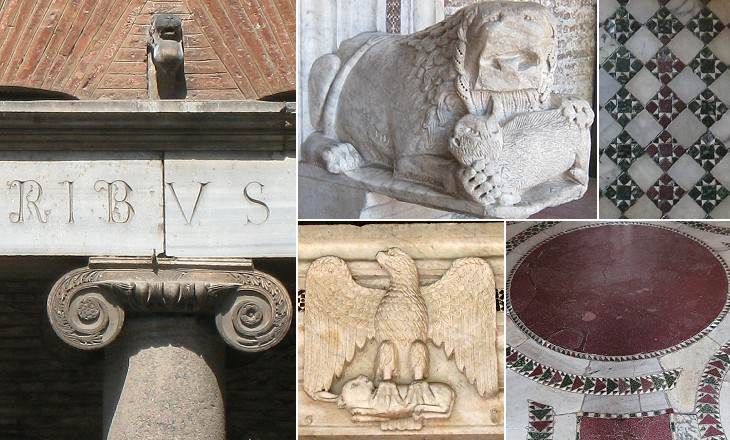 (left) Detail of the portico with an ancient capital and part of a dedicatory inscription dictated by Cardinal Giovanni Conti aka Giovanni di Sutri in ca 1150; (centre) lion (above) and eagle (below) representing the Church (see those at S. Lorenzo fuori le Mura); (right) details of the Cosmati floor (XIIIth century)

In the early XVIIIth century the church was in a very poor state and in 1718 Cardinal Fabrizio Paolucci, titular of SS. Giovanni e Paolo, commissioned a major redesign of the building. He chose however not to modify the portico (which he closed with an elegant railing) and to retain the remaining parts of the Cosmati floor. The inscription on his funerary monument at S. Marcello records this achievement: QUOD TEMPLO HOC CUIUS TIT. FUIT INSIGNITUS MAGNIFICENTISSIME INSTAURAVERIT ET ORNAVERIT (He restored and embellished the church of which he was titular). 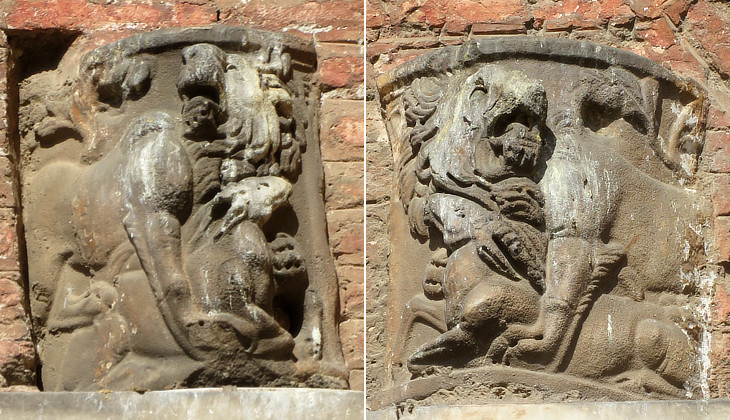 The iconoclast fury which in the course of the centuries led to the destruction of the mosaics of Constantinople, the English abbeys or the royal monuments of France seems to have spared the hills of Rome; even in the darkest periods of its history, fragments of the past of the city were respected and deemed suitable for the decoration of a church. Cardinal Paoluci was a close adviser to Pope Clement XI and a candidate to his succession, but his election in 1721 was vetoed by Holy Roman Emperor Charles VI.
The interior of SS. Giovanni e Paolo was redesigned by Antonio Canevari, an architect who is rarely mentioned by art historians, apart from his involvement in the construction of SS. Stimmate di S. Francesco. He incorporated most of the ancient columns inside brick pillars, but the current aspect of the interior is partly due to later changes which include the chandeliers which make it resemble a ballroom. 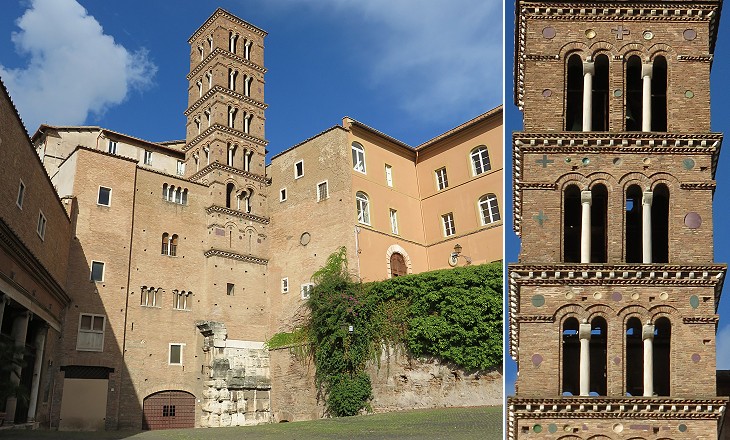 The bell tower and the monastery were built in the XIIth century on the walls supporting the ancient terrace. The medieval windows of the old monastery (to the left of the bell tower) are another effect of the 1952 restorations.
In the XVIIIth century the monastery was assigned to the Congregation of the Passion of Jesus Christ, which was founded by St. Paul of the Cross and was approved of by Pope Clement XIV in 1769. The saint is buried in a chapel of SS. Giovanni e Paolo which is named after him and the headquarters of the Congregation are still in the monastery. 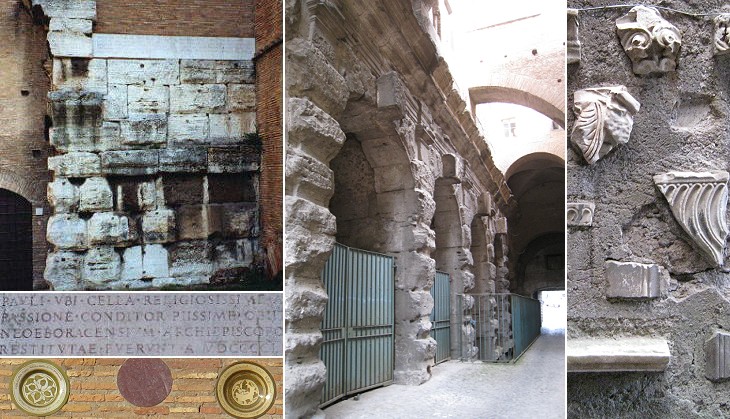 (left-from above) Roman substructures supporting the bell tower; inscription celebrating a 1952 restoration by Cardinal Francis Spellman; detail of the dishes embellishing the bell tower; (centre) Roman arches of Tempio di Claudio under the monastery (the design of their pillars recalls that of Porta Maggiore); ; (right) various reliefs found in the area

The bell tower (perhaps the finest Romanesque bell tower of Rome) is decorated with discs/crosses of porphyry and ceramic dishes (the image used as background for this page is based on them). During the restoration of the bell tower the dishes were replaced with copies and the originals were moved to a small museum inside the ancient Roman houses. It is rather surprising to discover that most of the dishes came from Spain, at the time under the domination of the Moors, and therefore they were decorated with inscriptions dedicated to Allah. So the bell tower can be regarded as a very early (although unintentional) attempt to overcome religious differences.
The Roman arches under the monastery were not visible until the 1952 restoration paid for by Cardinal Francis Spellman, Archbishop of New York; if you did not know how to say New York in Latin, the inscription celebrating the restoration could help you (Neoeboracensium=of New York, because Eboracum is the Latin name of York). 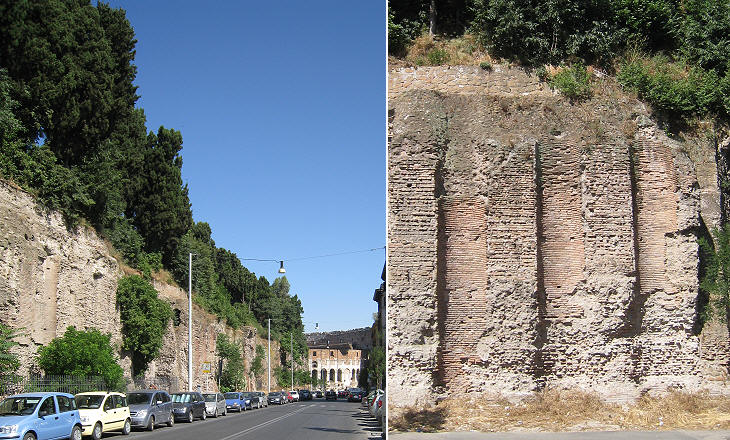 (left) Eastern walls (in the background the Colosseum); (right) detail of the walls

At the death of Emperor Claudius in 54 AD his wife Agrippina promoted the construction of a temple dedicated to him on the northern part of the Caelian Hill. Roman engineers modified the hill to obtain a large terrace at the centre of which the temple was to be built. Work was halted by Emperor Nero who included the area in his Domus Aurea; instead of a temple to his stepfather he preferred to have a large fountain. The temple was eventually built by Emperor Vespasian: it is entirely lost.
In 1880 excavations to open a new street leading to the Colosseum brought to light the eastern flank of the terrace; its walls still show the masonry skills achieved by the Romans: they were decorated with niches, but these had also a practical purpose because they increased the resistance of the structure. 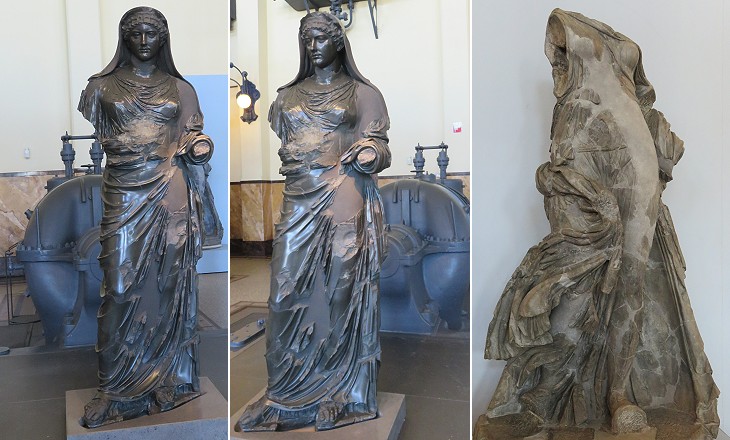 In 1885 excavations were made to build a military hospital on the site of Villa Casali which stood opposite the eastern walls of the terrace. Minute fragments of statues were found. It was possible to assemble them because they were made of dark stones from Tunisia and Egypt. That in better condition is believed to portray Agrippina, the other one most likely depicted a female dancer and both were part of the decoration of the temple.
The statue of the female dancer was initially associated with Quintus Aurelius Symmachus, a Roman senator who asked in vain for the return of a statue of Victory to the Senate, from where it had been removed in 382. In Relatio de Ara Victoriae he wrote: We are asking that the gods of our fathers, the gods of our country be left unmolested. All religions should be regarded as one. They all seek truth and there is no one road to so vast a secret. His appeal was rejected by Emperor Theodosius at the request of St. Ambrose. Archaeologists thought that perhaps Symmachus housed the statue in a property he had on the Caelian Hill. 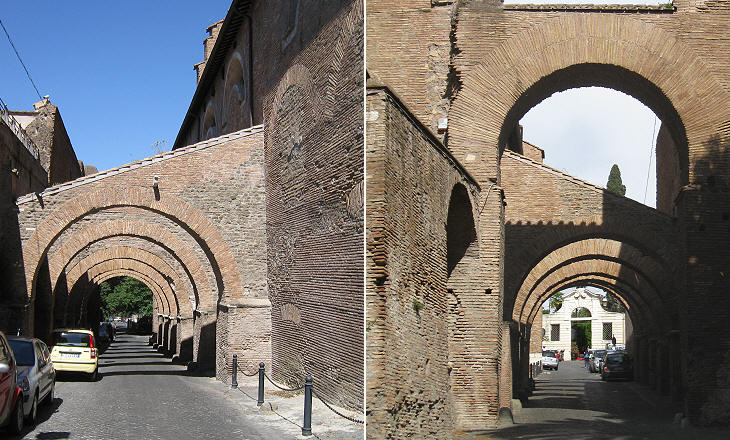 The narrow street which goes down to S. Gregorio is flanked on the left by old walls of Roman buildings. The arches were added in the XIIIth century to better support the church, with the exception of the highest one which dates back to the Vth century. Clivo means slope whereas Scauro is probably a reference to the Aemilii Scauri, an ancient Roman family. 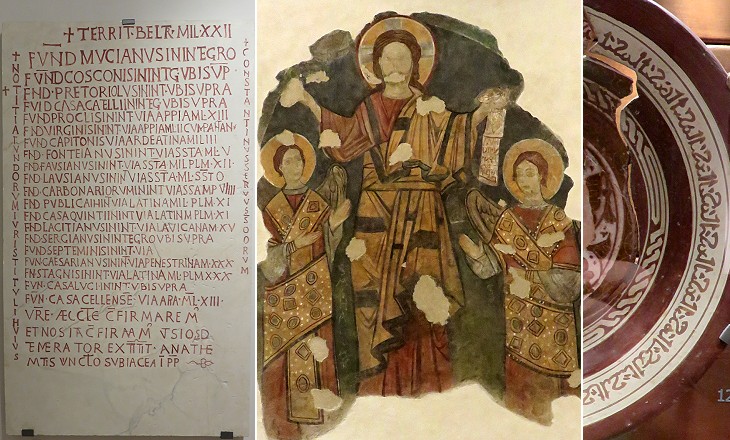 Small Museum: (left) list of properties, mainly farms, which belonged to the church in the VIIth century; (centre) detached XIIth century fresco from an oratory which stood near the portico; (right) detail of a dish from the bell tower having an Arabic inscription

In 1887 Father Germano da S. Stanislao, a Passionist, undertook archaeological excavations in order to find the burial site of the two martyrs. He discovered that the basilica had been built on previous Christian houses and on a funerary chapel. He deepened the excavations and he found layers of older buildings. 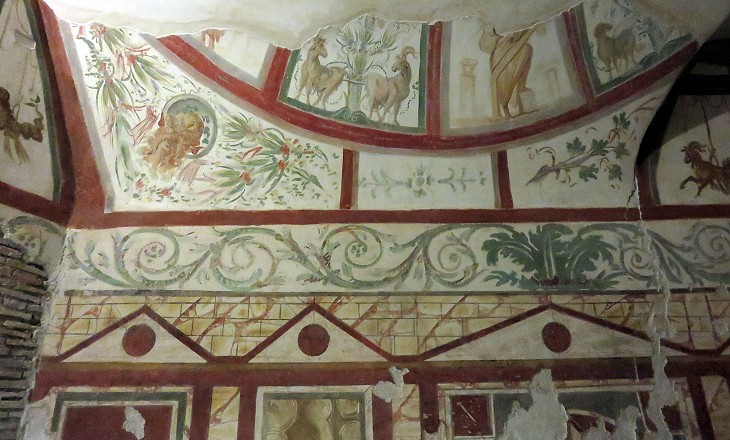 A IVth century large hall of a house was decorated with frescoes imitating marbles and depicting other traditional subjects (acanthus spirals, theatrical masks, etc), but the paintings near the ceiling were likely made when the house was inhabited by Christians. The excavations went ahead and they unearthed older rooms and walls. 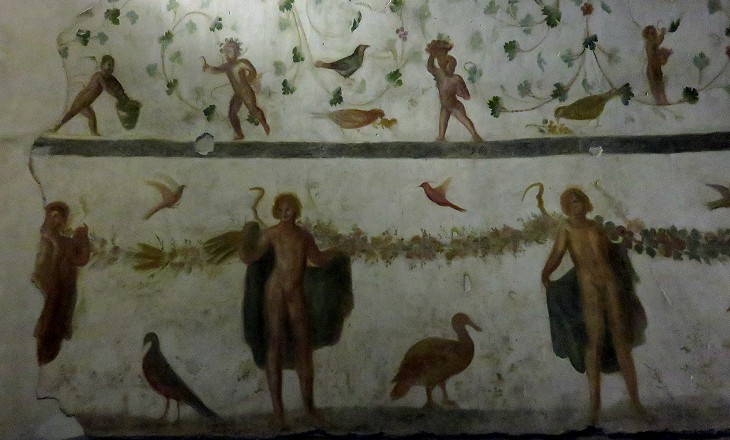 These frescoes are dated IIIrd century. The lower band depicts Genii, a sort of custodian angels of the Roman religion. The upper band shows children working in a vineyard; this subject became more and more popular and it was eventually adopted for the decoration of Christian buildings as at S. Costanza (you may wish to see one of the many floor mosaics depicting this subject). 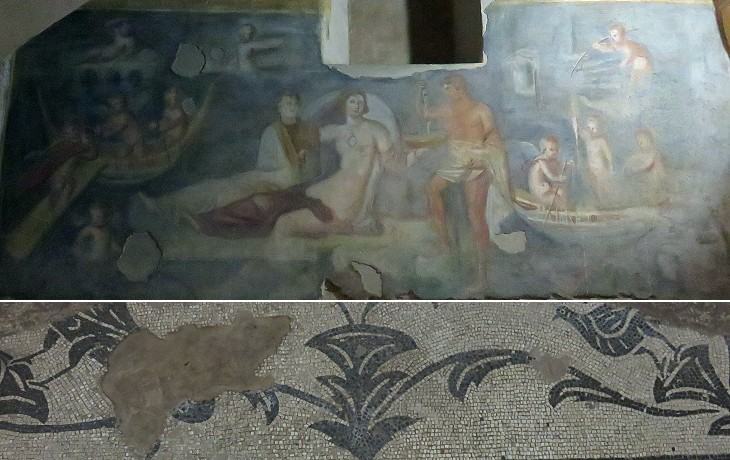 The oldest house is dated IInd century and it had a small nymphaeum. Its fresco is dated IIIrd century and it depicts Proserpina with other gods in the Underworld, It was eventually whitewashed and the wall was decorated with flowers.