- Moorish Cordoba
(left - Mosaic at Italica; right - decoration at the Alcazar of Seville)

You may wish to see two introductory pages to this section or a page on Roman Cordoba first. 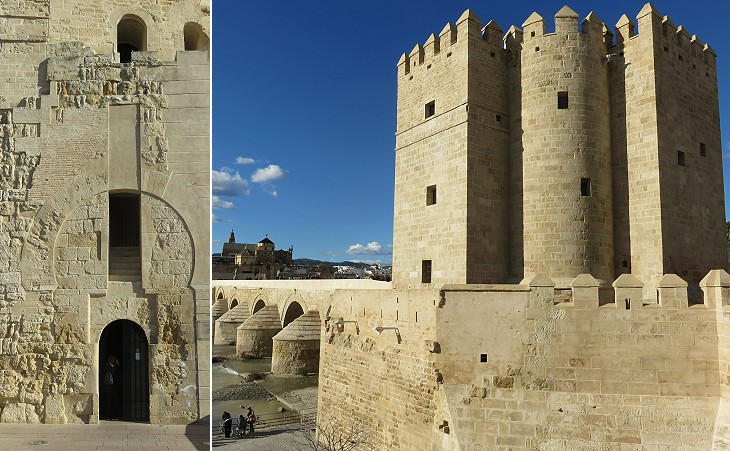 (left) Detail of Torre de Calahorra (after Arabic Qalaat al-Hurriya, meaning Tower of Freedom or rather free-standing tower); (right) a view of the tower and of the bridge it protects

To the Saracen Caliphs of the Ommayad family Cordova is indebted for its glory; as we hear but little of it before the year 755, when Abdoulrahman, only heir-male of the Ommayad line, passed over from Africa, at the head of a few desperate followers, and found means to raise a rebellion in Spain. After a battle fought on the banks of the Guadalquiver, in which he overthrew the lieutenant of the Abbasid Caliph, Abdoulrahman became king of all the Moorish possessions in the South of Spain, and in 759 fixed his royal residence at Cordova.
Henry Swinburne - Travels through Spain in the Years 1775 and 1776 in which several monuments of Roman and Moorish architecture are illustrated. 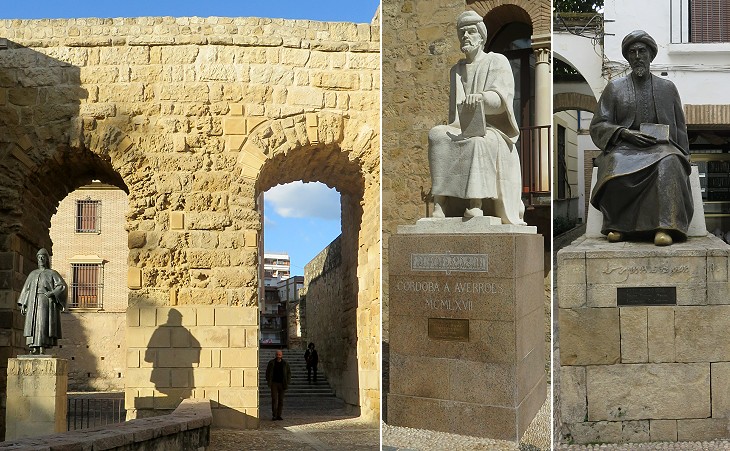 The residence of the Ommayad Caliphs was long conspicuous for its supreme magnificence, and the crowds of learned men, who were allured to it by the protection offered by its sovereigns. (..) These Sultans not only gave the most distinguished protection to arts and sciences, and to the persons learned in any of them, but were themselves eminently versed in various branches of knowledge. Alkehem the Second collected so immense a quantity of manuscripts, that before the end of his reign, the royal library contained no less than six hundred thousand volumes. (..) The university of Cordova was founded by him, and under such favourable auspices, rose to the highest pitch of celebrity. Swinburne 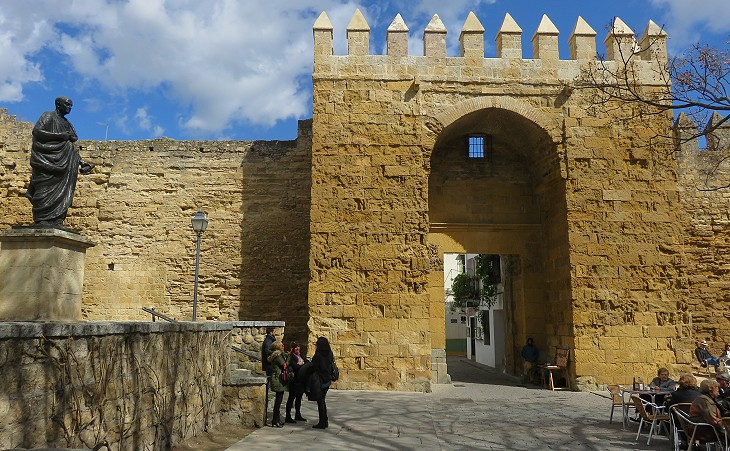 I am just informed that our wheel will require another day to be refitted; which is a terrible piece of news indeed this rainy weather; for every day the roads will grow worse and worse, and we are not able to ride about to see the environs. Were there such a thing as a bookseller in this once learned city, I would buy Seneca, and try what consolation his philosophy affords in his native country. Swinburne
Puerta de Almodovar is one of three remaining medieval gates of Cordoba. It was redesigned in the XIVth century. The original gate most likely had a horseshoe arch. 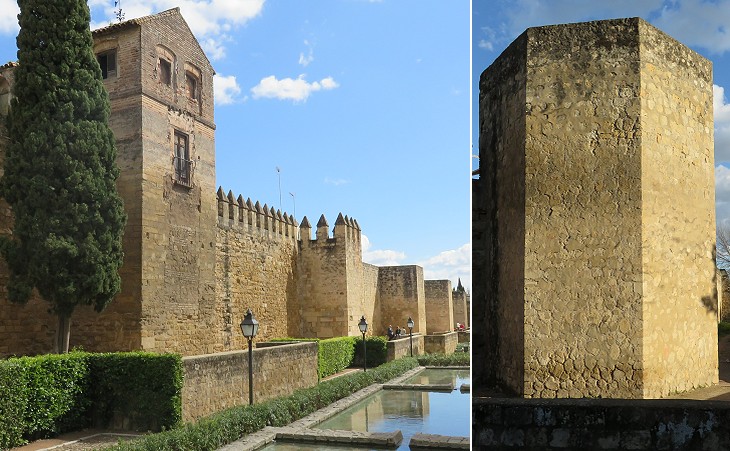 The walk round the lonely walls is picturesque. They are Moorish, and built of "tapia"; with their gates and towers they must have been nearly similar to that original circumvallation described by Caesar (De Bello Civili).
Richard Ford - A Handbook for Travellers in Spain - 1855
Estimates of the population of Cordoba at its apogee in the Xth century greatly vary. The figure of one million inhabitants which is deduced from Arab chronicles of the number of its mosques and bathhouses is often quoted. A more reasonable assessment is in the region of 150,000-450,000. Considering the size of the medina, the walled town, the lower figure seems more realistic. Even this figure made Cordoba the most populated city of Europe together with Constantinople. 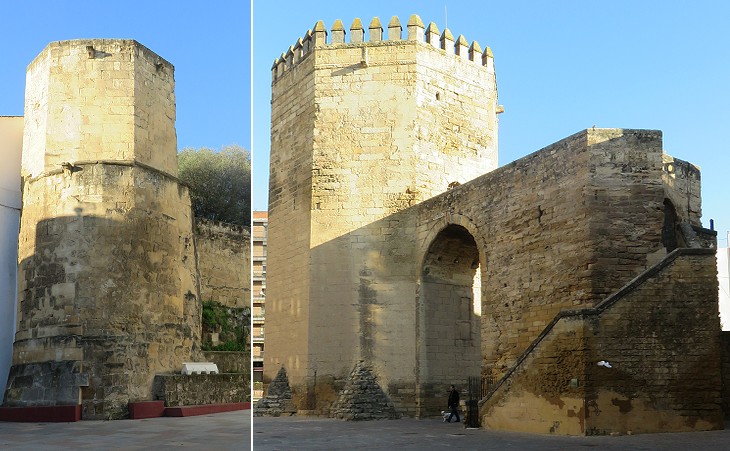 The Muslim rulers of Cordoba built additional walls to protect Axarquia, a new neighbourhood in the eastern part of the town; the name comes from the Arabic sharqi meaning eastern. Puerta del Rincon was one of the passages between the medina and Axarquia.
The pentagon tower, near "La Mala Muerte" was erected in 1406 by Enrique III. Ford
This tower was built at the beginning of the XVth century on the site of a Moorish one. It is named Malmuerta (wrongly killed) because according to legend it was built as a vow by a knight who had killed his wife on the wrong assumption she had committed adultery. 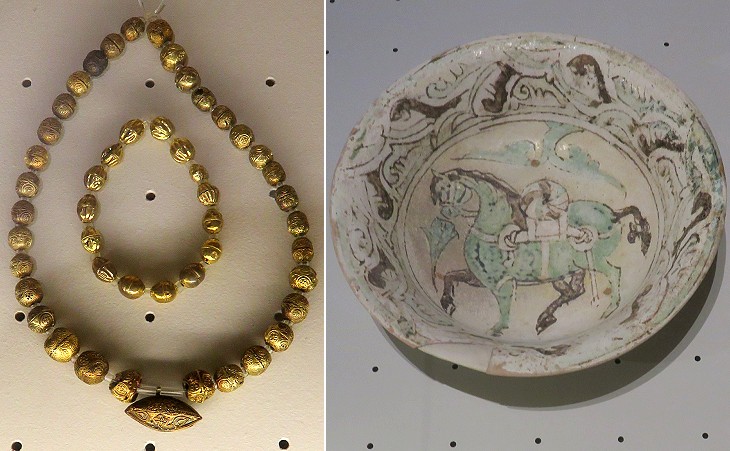 Archaeological Museum of Cordoba: caliphal period Xth-XIth centuries: (left) jewels; (right) lusterware bowl (some of the wares found at Cordoba are regarded as early examples of "cuerda seca", a technique for using a plurality of colours) Abdoulrahman the Second was also passionately fond of building. He was the first that brought supplies of water to Cordova, by means of leaden pipes laid upon aqueducts of stone. The quantity was so considerable that every part of the palace, the mosques, baths, squares, and public edifices, had all of them their fountains constantly playing. Swinburne
Caliphal Cordoba was a very cosmopolitan city and its rulers, while strictly complying with the prohibition of portraying living beings in mosques, saw nothing wrong in the depiction of animals for purely decorative purposes in other buildings. 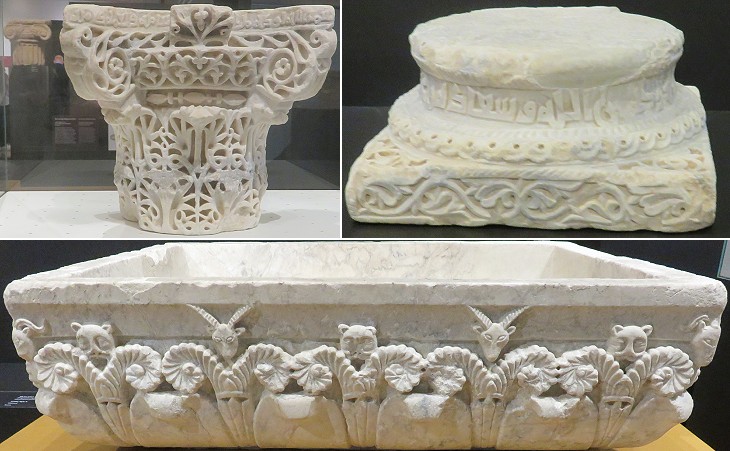 Archaeological Museum of Cordoba: capital, base of a column and a water basin of the caliphal period; the image used as background for this page shows a detail of a marble relief

Cordova became the centre of politeness, industry, and genius. Tilts and tournaments, with other costly shews, were long the darling pastimes of a wealthy, happy people; and this was the only kingdom in the west, where geometry, astronomy, and physic were regularly studied and practised. (..) That architecture was greatly encouraged, we need no other proof than the great and expensive fabrics undertaken and completed by many of these Moorish monarchs. Swinburne
The Caliphs of Cordoba were usually in good terms with the Emperors of Constantinople. They shared the same enemies i.e. the Fatimid Caliphs of Ifriqiya (Tunisia) and the Abbasid Caliphs of Baghdad. The Great Mosque was decorated with the assistance of Byzantine mosaic makers. It is likely that also some skilled sculptors from Constantinople were employed in the decoration of marble architectural elements (see a capital at Hagia Sophia in Constantinople). 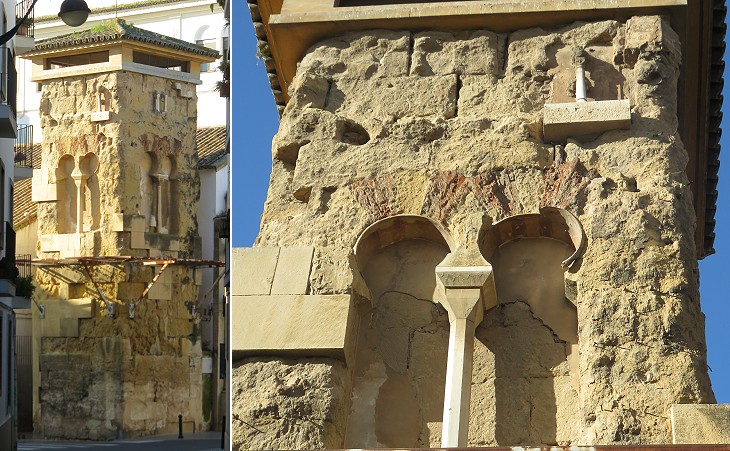 Alminar de San Juan, the minaret of a small mosque which was converted into a church

Abdoulrahman the Third, surpassed all his predecessors in splendour, riches, and expence. (..) The Moors were then masters of all the richest provinces of Spain. (..) This monarch left a minor to succeed him, and the kingdom to be governed by the famous visier Mahomet Abenamir, surnamed Almanzor, or the defender, from his great victories and wise conduct. His descendants inherited from him the visiership, and a power as absolute as if they had been caliphs, until the weakness of the sovereigns encouraged, and the insolence of the ministers provoked the grandees to disturb the state with their jealousies and dissensions; these broils occasioned such a series of civil wars and anarchy, as overthrew the throne of Cordova, and destroyed the whole race of Abdoulrahman. Thus the glorious edifice founded by the valour and prudence of that conqueror, and cemented by similar virtues in many of his successors, sunk into nothing, as soon as the sceptre devolved upon weak, enervated princes, whose indolence and incapacity transferred the management of every thing to a visier. Many petty kingdoms sprang up out of the ruins of this mighty empire; and the Christians soon found opportunities of destroying, by separate attacks, that tremendous power, which when united had proved an overmatch for their utmost force. Swinburne 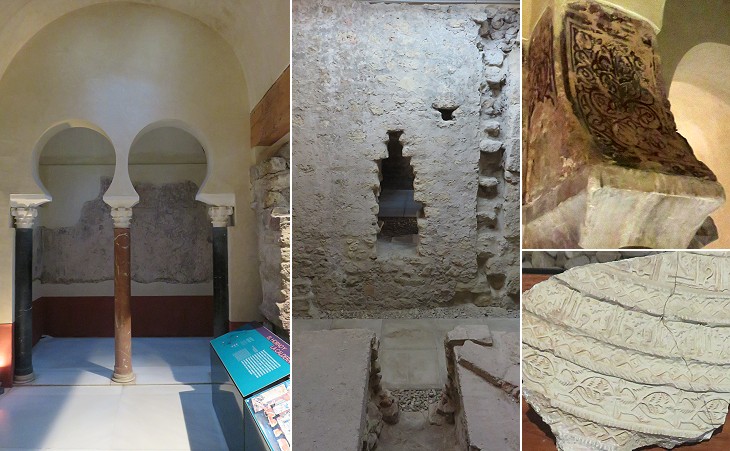 Banos Califales and details of their decoration

The baths were built in the Xth century for the enjoyment of the caliph and his court. Between the XIth and XIIIth centuries, they were used by the Almoravid and Almohad Moroccan sultans who managed to submit the small taifas (emirates) into which the Caliphate of Cordoba was split in ca 1031. The remains of the baths were found accidentally in 1903 and were subsequently buried. They were recovered in the 1960s and eventually restored.

In 1212 the Almohads suffered a crushing defeat by a Christian coalition in the Battle of Las Navas de Tolosa. The event had long lasting consequences: King Ferdinand III of Castile conquered Cordoba in 1236 and Seville in 1248 with the help of the first Nasrid ruler of Granada.

Move to Roman Cordoba or The Great Mosque or Cordoba after 1236.