- Roman and Visigothic Toledo
(left - Mosaic at Italica; right - decoration at the Alcazar of Seville) 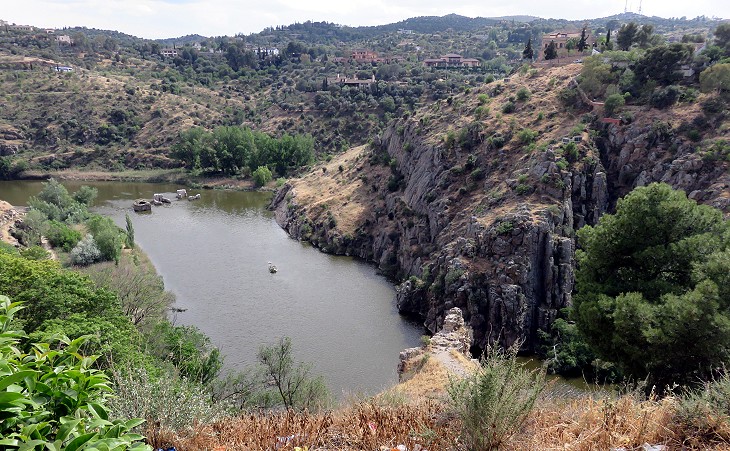 May 12, 1761. We found the road to Toledo good for travellers, the country about it but indifferent, tolerably tilled, and planted with olive-trees: We passed almost the whole way upon the banks of the Tagus, which are not by any means such as would furnish a poet with fine landskapes, or beautiful images. But the river runs through a rude and wild waste: the windings of it near the city of Toledo are beautiful; and where the river passes between the rocks on which the city is built, and those adjoining, with the bridge and gate of the city, all together form such a view, as the wild imagination of the extravagant Salvator Rosa (an Italian painter of the XVIIth century who was highly praised for his proto-Romantic landscapes) would have delighted in.
Edward Clarke - Letters concerning the Spanish nation: written during the years 1760 and 1761
Toledo is the strangest city you can imagine in point of situation. (..) The Tagus, after winding at large through a fine plain, which a little more wood would render very agreeable to the eye, comes at last to be wedged in between two ramparts of high steep rocks: the passage is very narrow, and before the river gets out again into a broad bed and open ground, it almost returns to the place where it entered the defile. On this rocky peninsula stands the city, exceedingly ill built, poor, and ugly.
Henry Swinburne - Travels through Spain in the Years 1775 and 1776 in which several monuments of Roman and Moorish architecture are illustrated
The Tagus flows underneath the mountain on which Toledo is built; it was formerly navigable, and might again be rendered so with little trouble and expence.
Alexandre de Laborde - A View of Spain - translated into English for Longman, Hurst, etc. 1809 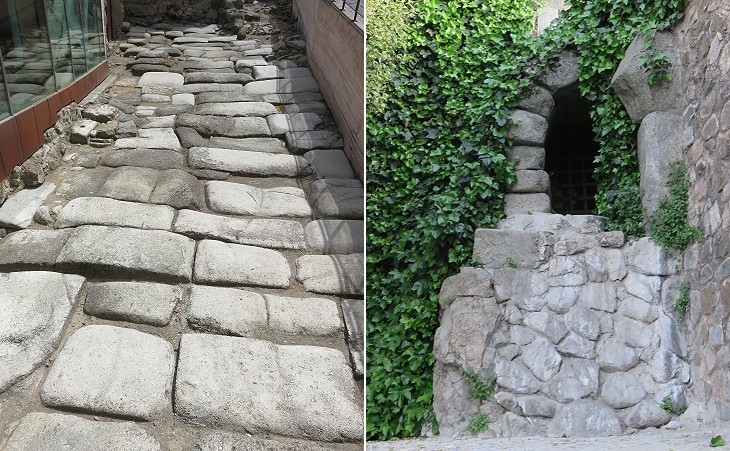 The foundation of Toledo is of course ascribed to Hercules; others, however, prefer Tubal (grandson of Noah) who built it 143 years after the deluge; nor have its townsfolk yet forgiven the Abbe' de Vayrac (a French traveller who wrote a book on Spain in 1718) for saying that they boasted that "Adam was the first king of Toledo, and that the newly created sun rose over this spot, because it was the centre and throne of the world". (..) Be that as it may, Toledo, when taken by Marius Fulvius, 193 BC, was "urbs parva sed loco munita" (a small town, but well located) (Livy, xxxv. 22).
Richard Ford - A Handbook for Travellers in Spain - 1855
Pliny the Elder (Naturalis Historia - Book III:29) in a long list of towns and peoples of Spain mentions the Toletani of Carpetania, dwelling upon the River Tagus. The Carpetani vainly opposed the Carthaginian expansion in inland Spain. They provided auxiliary troops to Hannibal's expedition to Italy, who however deserted after having crossed the Alps.
The road entering the town at Puerta Cristo de la Luz follows the path of the ancient Roman one. 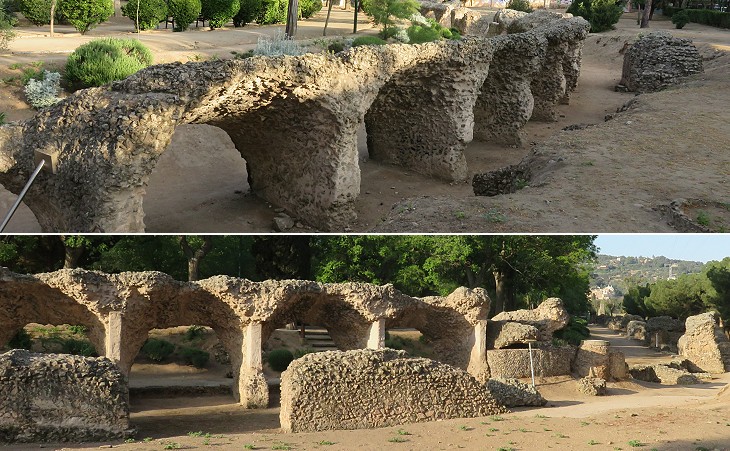 Of all the edifices which the Romans raised at Toledo, the monuments of their power and magnificence, few vestiges are now visible. There yet remain some fragments of pilasters and seats, which indicate the site of an ancient circus. These are found without the limits of the town, near the gate of Cambron, in the Vega (farmed lowland), not far from a convent of friars. The broken lines sufficiently mark its ample extent, whilst the massive walls attest its strength and solidity. Laborde
The existence of a circus which could seat some 15,000 spectators is the only indirect assessment of the size of the Roman town, which had a theatre near the circus and an amphitheatre also outside the walls, but near Torre de la Almofala. You may wish to see these entertainment facilities at Merida, ancient Augusta Emerita. 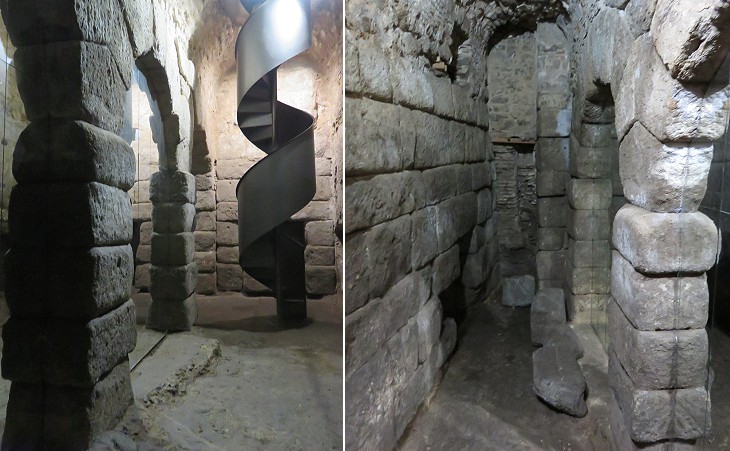 The lovers of the fabulous may visit the cave of Hercules, in which Roderick, the last of the Goths, saw such portentous visions. The entrance lies near San Gines, and was opened in 1546 by Archbishop Siliceo, but it has never since been properly investigated. Ford
According to the legend Hercules closed a coffer inside the cave and warned not to open it, but Roderick ignored the warning and lost his kingdom.
Within the coffer he found nothing but a linen cloth, folded between two tablets of copper. On unfolding it, he beheld painted on it figures of men on horseback, of fierce demeanor, clad in turbans and robes of various colors, after the fashion of the Arabs, with scimetars hanging from their necks, and cross-bows at their saddle-backs, and they carried banners and pennons with divers devices. Above them was inscribed, in Greek characters, "Rash monarch! behold the men who are to hurl thee from thy throne, and subdue thy kingdom!"
Washington Irving - The Legend of Don Roderick - 1835
Another account can be found in The Vision of Don Roderick, an 1811 poem by Sir Walter Scott. These are the verses describing the opening of the door of the cave.
The ponderous key the old man took,
And held the winking lamp, and led the way,
By winding stair, dark aisle, and secret nook,
Then on an ancient gateway bent his look;
And, as the key the desperate King essayed,
Low muttered thunders the Cathedral shook,
And twice he stopped, and twice new effort made,
Till the huge bolts rolled back, and the loud hinges brayed.
Toledo was supplied with water by a Roman aqueduct which crossed the river near Hospital de la Santa Cruz and ended at this cistern at the top of the town. 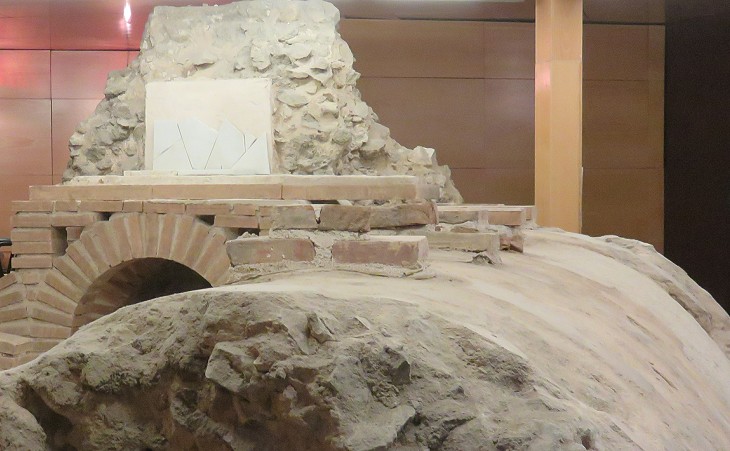 Toledo has been continuously occupied from Roman times which limits the scope of archaeological activities in the walled town. In 2012 a small archaeological site was opened to the public to show some underground facilities of Roman baths near Cuevas de Hercules which were discovered in 1986. 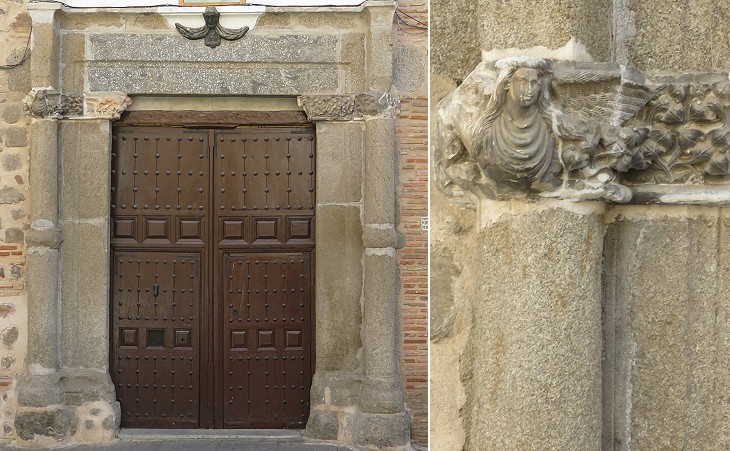 Here the voice of the Goth echoes amid Roman ruins, and the step of the Christian treads on the heel of the Moor; here are palaces without nobles, churches without congregations, walks without people; the narrowness of the streets, by preventing carriage traffic, adds to that silence so peculiar to the ancient cities of Spain. Ford
By wandering about in the narrow streets of the town, one comes across Roman and medieval architectural elements and decorations which most likely were found during the construction of houses and convents. 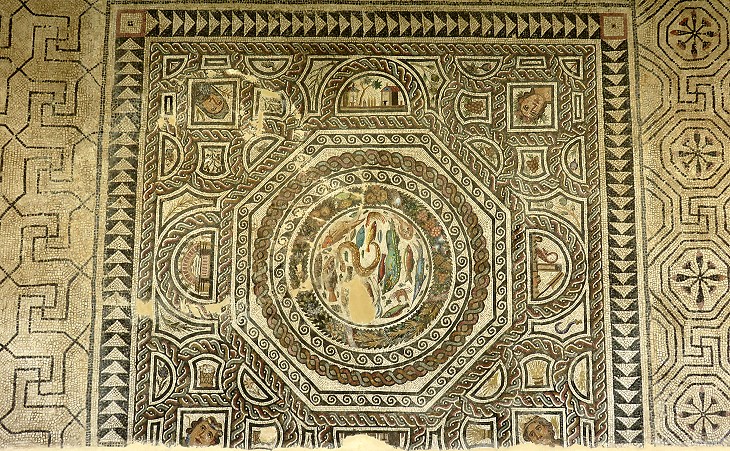 It is a finely executed floor mosaic with an elaborate geometric pattern based on plait motifs and Vitruvian scrolls which frames a central medallion with sea creatures; at the corners it shows the Four Seasons and fruits and crops related to them; along the sides buildings, statues, an arch and elements of a ship are depicted. You may wish to see some other Roman mosaics in which a complex geometric decoration frames the Four Seasons or other subjects or a mosaic with sea creatures at Tarragona.
In 1983 a farmer at Carranque, a small town between Toledo and Madrid, discovered a piece of a Roman floor mosaic which eventually led to unearthing a villa of the IVth century AD.

Museo de los Concilios y de la Cultura Visigoda at San Roman: cast of a sarcophagus found at Layos, near Toledo in 1627 (original at Museum Frederic Mares in Barcelona - see a detail in the introductory page)

This sarcophagus was imported, most likely from Rome where other early Christian sarcophagi depicting scenes from the Old and the New Testament have been found at S. Paolo fuori le Mura and S. Agnese fuori le Mura. The depiction of the Magi in oriental garments is typical of that period (see a famous mosaic at S. Apollinare Nuovo in Ravenna). 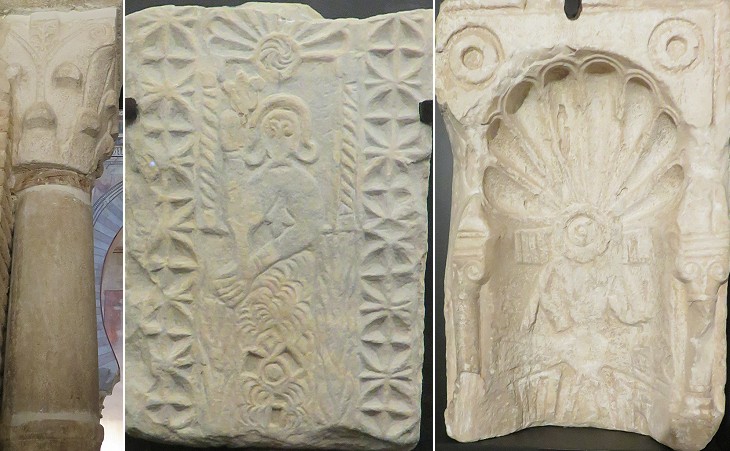 Museo de los Concilios y de la Cultura Visigoda at San Roman: Visigothic works of art: (left) capital; (centre) relief; (right) niche carved inside a Roman column with alfa and omega, it brings to mind Visigothic Christograms at Merida and Cordoba and it is one of the first examples of horseshoe arch

Leovigildo, under whom the Gothic monarchy was consolidated, removed his court from Seville, and made Toledo the capital of Spain. His successor, Recaredo, brought the Peninsula entirely into the Christian fold, and hence here were held so many of those important councils which give such insight into the spirit and condition of that age; they in reality were convocations and parliaments, as the sacerdotal aristocracy united social and civil supremacy. (..) The Goths, who have been so frequently stigmatised as destructive barbarians, repaired and improved the city bridges, and Roman walls; portions of their works yet exist. Ford 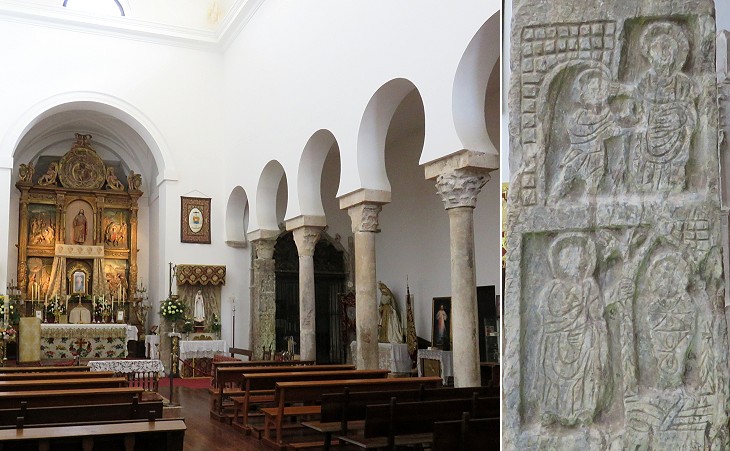 Iglesia de El Salvador: (left) interior; (right) detail of a Visigothic pillar (original at the Museum at San Roman) showing Jesus Healing the Blind Man and The Raising of Lazarus

Toledo became a very important town during the Visigothic rule. In 589 the outcome of a council held there was the conversion of the Arian Visigoths to the Catholic creed. In 610 the primacy of the diocese of Toledo over the other episcopal sees in Spain was established in a synod promoted by King Gundemar.
El Salvador was a Visigothic church which was turned into a mosque before being restored to its initial function. Its most important feature is a unique Visigothic pillar which serves for the arcading of the nave. It is carved on three sides with vine scrolls and formal vegetal motifs, and with three miniature columns in relief, similar to other Visigothic pillars found at Merida. The fourth side depicts four New Testament scenes. The execution shows a lack of skill in the portrayal of human beings which can be noticed also in contemporary reliefs in Italy. 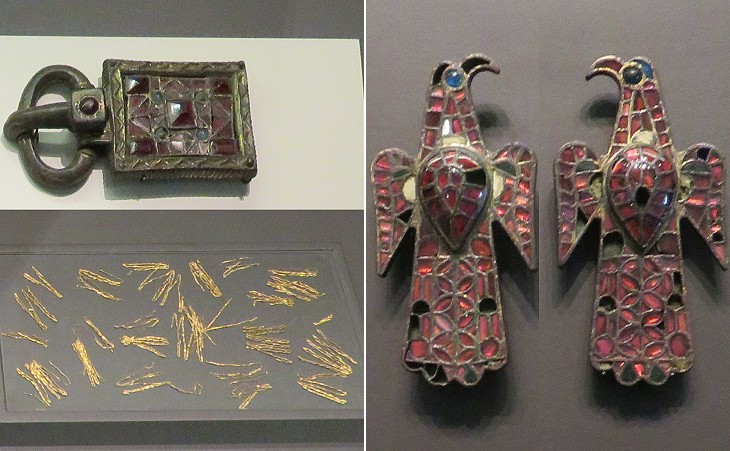 National Archaeological Museum of Madrid: Visigothic jewels (VIth century): (left) belt buckle and gold threads from a garment (necropolis of El Garbo de Tajo near Toledo); (right) eagle brooches (Alovera near Guadalajara north-east of Toledo); you may wish to compare them with Saxon, Merovingian and Longobard ones

A Mozarabic (Christian) community survived in Toledo after the Arab conquest in 711. They used Visigothic liturgical rites and the Arabic language. This liturgy was revised by Cardinal Francisco Ximenes de Cisneros in 1500-1502 and is still used in a chapel of the Cathedral.
The image used as background for this page shows a Roman table leg at the Museum at San Roman.

Move to Walls and Gates of Toledo or Moorish and Mudéjar Toledo or Gothic and Renaissance Toledo.