- Toledo: Walls and Gates
(left - Mosaic at Italica; right - decoration at the Alcazar of Seville)

You may wish to see two introductory pages to this section or a page on Roman and Visigothic Toledo first. 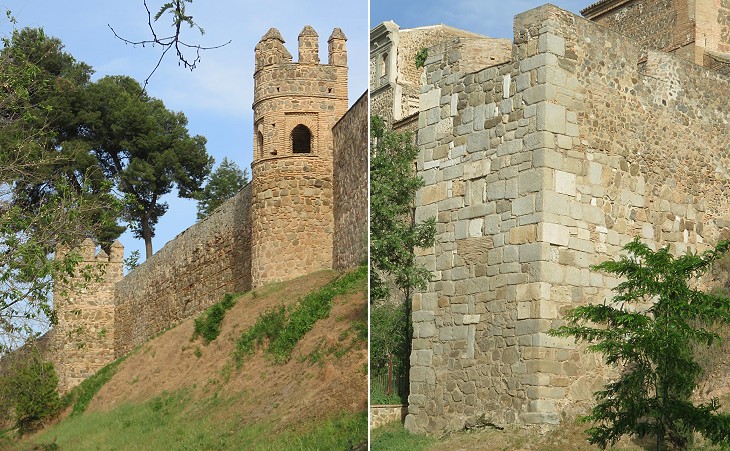 Towers near Puerta del Cambron: (left) these towers were restored in an improbable manner to make them vaguely resemble those of the Alhambra at Granada; (right) a Visigothic tower

The walls which formed the enclosure of this city under the kings of Castile are still to be seen; they are low, built almost at the foot of the mountain, and defended with small towers, at a certain distance from each other, and built in such a manner as to seem intended, rather to support the soil than to contribute to the defence of the city. The enclosure of the Moors was the smallest; it was confined to the highest part of the city. (..) Some transverse walls are still remaining, as well as the foundation of the walls of this enclosure, which are flanked with round towers, and two gates, one of them armed with battlements and loop-holes.
Alexandre de Laborde - A View of Spain - translated into English for Longman, Hurst, etc. 1809 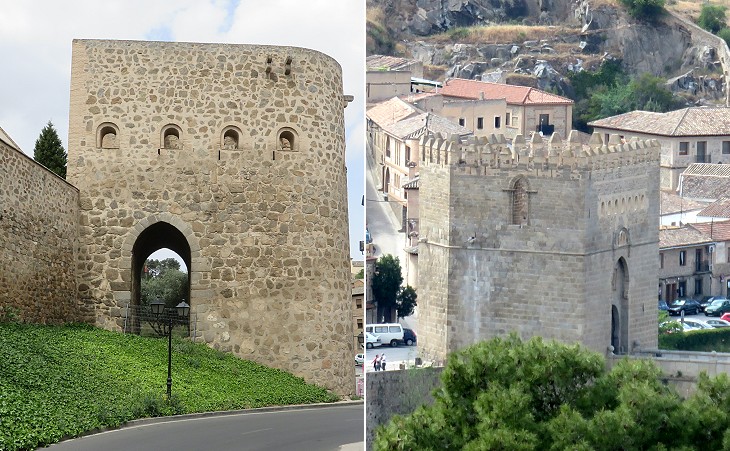 The Kings of Castile strengthened the fortifications of Toledo by building towers which projected from the walls, similar to Torre de la Malmuerta at Cordoba, or controlled the passage across a bridge.
Almofala is thought to mean Almohad, but the Almohads never conquered Toledo. The construction technique they used to build walls and towers (see examples at Caceres) was very different from that of Torre de la Almofala.
Descend now to the bridge of San Martin, which was broken in 1368 by Henry of Trastamara, and repaired by Archbishop Tenorio in 1390.
Richard Ford - A Handbook for Travellers in Spain - 1855
The Kings of Castile did not have a settled capital; they often resided at Toledo, but also Burgos and Valladolid were centres of royal authority. In the absence (and sometimes also in the presence) of the king, Toledo was de facto ruled by its Archbishops. They did not refrain from personally leading troops at war. Cardinal Gil de Albornoz who restored Papal authority in Italy in 1353-1367 was an Archbishop of Toledo. 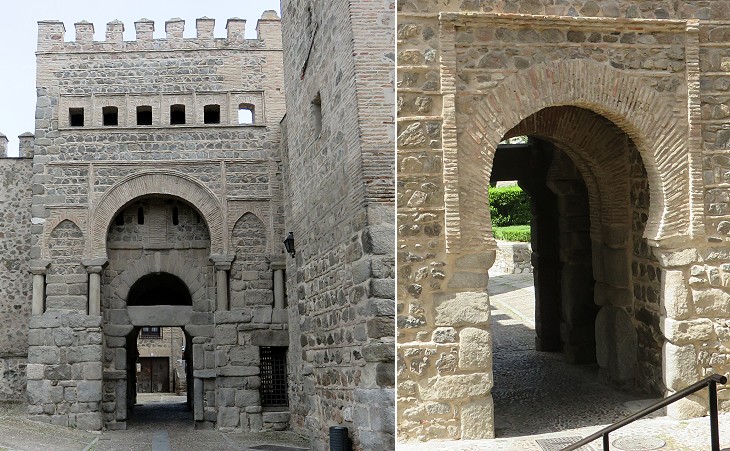 Observe the slits for arrows and the horseshoe arches above: this gate was built by Moorish workmen for Alonso VI. (..) The name Visagra, said by some to be Via Sacra, the road by which Alonso entered in triumph, is simply Bib Sakra, Arabic "gate of the country". Ford
Toledo is surrounded on three sides by the River Tagus. The access to the town on the land side was protected by a series of gates, the first one being Puerta Vieja de Bisagra. The gate is situated at the foot of the hill and it is named also after King Alfonso VI of Castile who entered Toledo through it in 1085. Its Moorish features are an example of mudéjar because they were added in the XIIIth century or later. The image used as background for this page shows a detail of the gate.
Mudéjar is the term used to indicate the Moorish style which characterizes some monuments which were built after the Christian Reconquista of Spain (see the Real Alcazar of Seville). 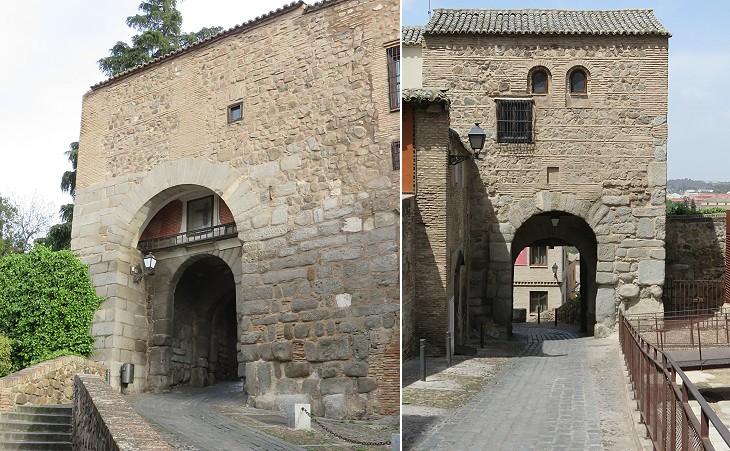 Puerta Cristo de la Luz (or Valmardon or Bab-al-Mardon): (left) external side; (right) town side and the Roman road on the right

Puerta Cristo de la Luz is named after a mosque which was turned into a church. It is situated on the initial slope of the hill and it is dated approximately Xth century so it was built during the Moorish rule of Toledo. It most likely made use of previous Roman/Visigothic structures and it directly led to the top of the town. 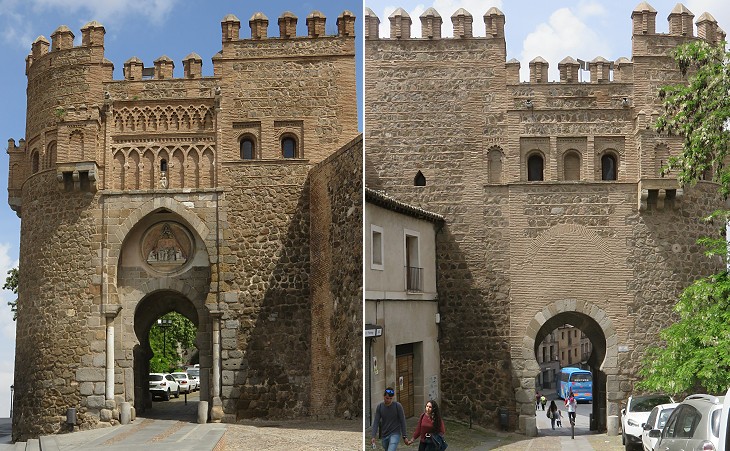 First walk round this most picturesque old city, beginning at the north-eastern land approach; descend to the Puerta del Sol, a rich Moorish gate of granite horseshoe arches, with upper intersecting ones of red brick, and follow the old road which winds down. Ford
A new gate was opened very near Puerta Cristo de la Luz to provide the town with an access leading to Zocodover, a marketplace, and from there to the Alcazar (castle/palace). The gate is generally dated XIVth century, It is a good example of mudéjar military architecture together with Castillo de Coca, a fortress near Segovia. 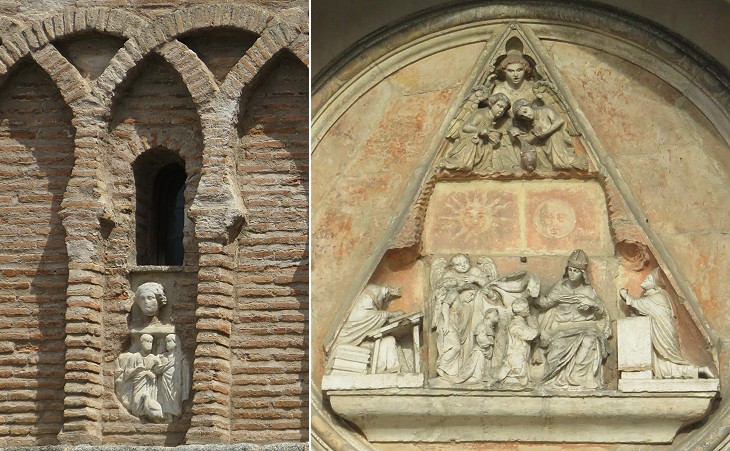 Puerta del Sol: (left) interlacing arches (see those in the Great Mosque of Cordoba) and two Roman reliefs; (right) medallion depicting the ordination of Ildephonsus, Toledo's patron saint; it contains the painting of the sun after which the gate is named (something which is not unusual)

San Ildefonso was born at Toledo (..) and wrote a book in defence of the perpetual virginity of the Virgin Mary which some French heretics had questioned, (..) but some of the arguments, how ever fitted for a congregation of Goths, cannot well be here repeated. Ford
Saint Ildephonsus was Archbishop of Toledo in 657-667 and still is one of the most popular saints in Spain. The Spanish Augustinans dedicated a church to him in Rome. 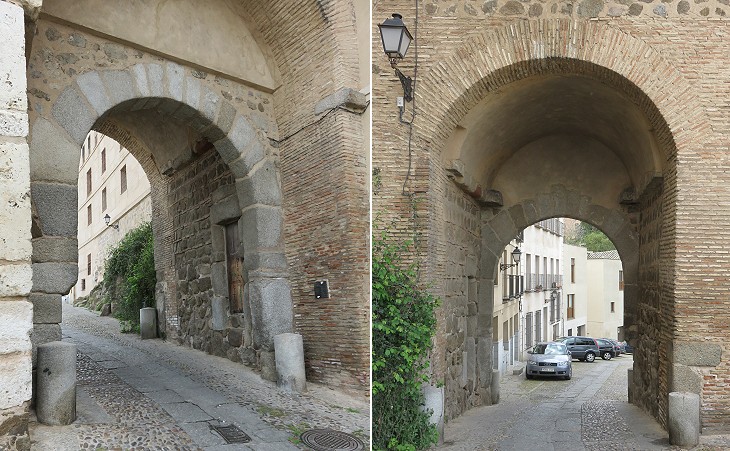 The streets are so steep, that no stranger in his sober senses would venture up - or down them in a carriage.
Henry Swinburne - Travels through Spain in the Years 1775 and 1776 in which several monuments of Roman and Moorish architecture are illustrated
A second gate across the steep street from Puerta del Sol strengthened the defence of the town. Most likely some sort of fortification existed on this spot already in Visigothic time. 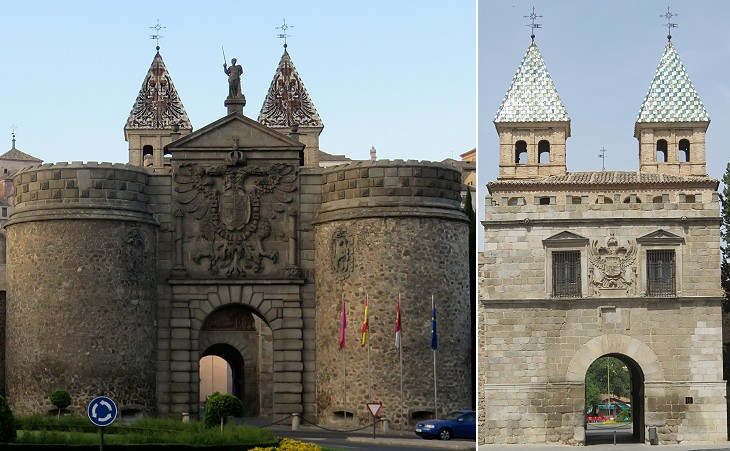 Puerta Nueva de Bisagra: (left) external side (notice the double-headed eagle of the Habsburgs also on the tiles of the towers, similar to Porta Nuova at Palermo); (right) town side

You enter Toledo by the gate of Visagra, and ascend a very steep and difficult eminence, through several narrow, crooked, and ill-disposed streets, and after considerable difficulty alight at the inn. Laborde
Read Philip's inscription, (..) which records how he restored the "inscriptionibus antiquis restitutis Divos urbis patronos" and destroyed Moorish impieties. Ford
In 1561 King Philip II decided that Spain should have a permanent capital at Madrid, north-east of Toledo, at the time a very minor town. He completed however the construction of a new grand gate in the old capital which his father had begun in the 1540s. 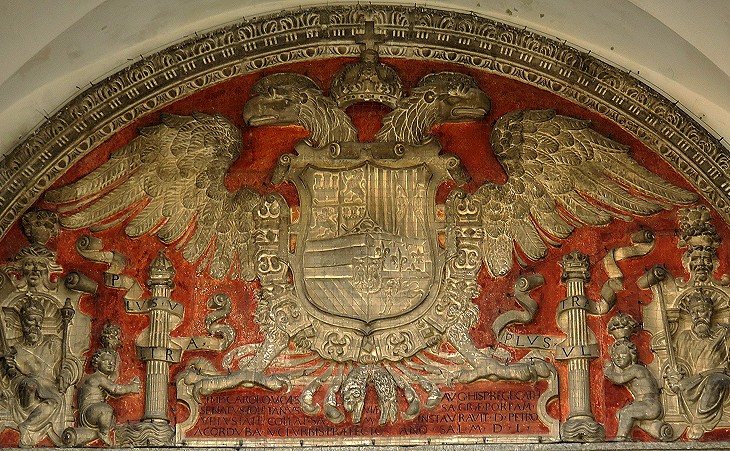 Puerta Nueva de Bisagra: 1550 coat of arms of Emperor Charles V in the courtyard; notice the columns with the inscription "Plus Ultra" and the Collar of the Golden Fleece

The coat of arms was made at the initiative of the municipality of Toledo; it was horizontally divided into two sections: the upper one shows the countries Charles ruled as King of Spain and which he inherited from his mother Joanna, daugther of Isabella of Castile and Ferdinand of Aragon, whereas the lower one shows those he inherited from his father Philip the Handsome of the House of Habsburg. 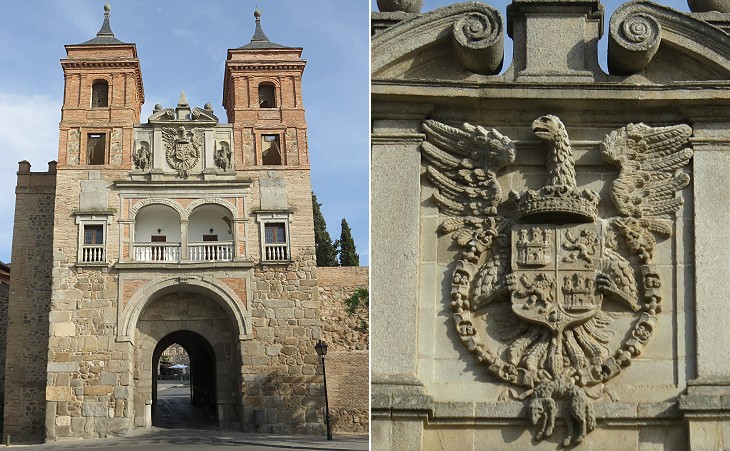 Ascend to the Puerta del Cambron, rebuilt in 1576, when the old Moorish gate was pulled down, and enter Toledo again. Ford
This gate gave access to the Jewish quarter and from it a winding road led down to Ponte San Martin.

Move to Roman and Visigothic Toledo or Moorish and Mudéjar Toledo or Gothic and Renaissance Toledo.