- Moorish and Mudéjar Toledo
(left - Mosaic at Italica; right - decoration at the Alcazar of Seville)

You may wish to see an introductory page to this section or a page on Roman and Visigothic Toledo first. Toledo is an ancient and formerly a highly celebrated city, and was, in succession, the seat of empire of the Goths, the Moors, and the kings of Castile. The kings of the Goths made it their residence in 567; it was taken from them by the Moors in 711, and became a dependency on the caliphs of Damascus and Bagdad; at length it formed a part of the kingdom of Cordova, till a prince of the Moorish blood royal raised the standard of revolt, and established a separate empire, of which Toledo, about the year 1027, became the capital.
Alexandre de Laborde - A View of Spain - translated into English for Longman, Hurst, etc. 1809
Cristo de la Luz is situated near the gate by the same name. From the inscription in the outer wall we know it was erected in 999 by Ahmad ibn Hadidi, a member of a local noble house using an architect called Musa ibn Ali, possibly on the site of a church, because Visigothic capitals were reused on the four central columns which divide the interior space into nine roughly equal sections. No trace remains of the original plaster or other decorative features of the interior. 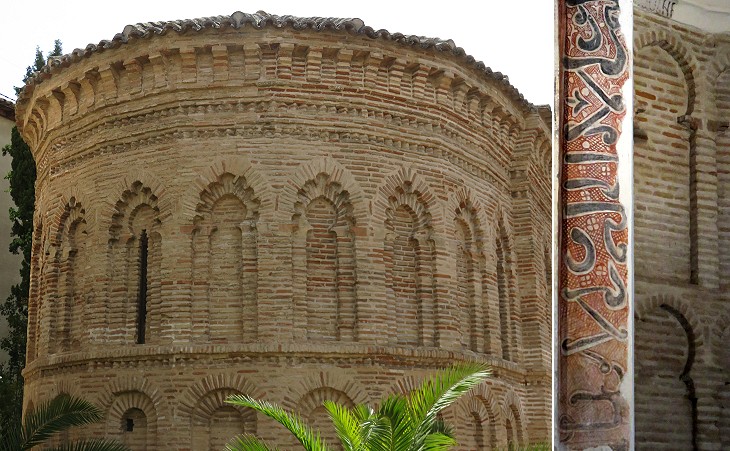 In the Calle de Cristo de la Lux is a very curious Moorish mosque, which was afterwards given to the Templars. (..) Alonso VI paused here to say mass when he entered Toledo as its conqueror in 1085.
Richard Ford - A Handbook for Travellers in Spain - 1855
The present apse was added in 1190 by the Knights Hospitaller in mudéjar style. Mudéjar is the term used to indicate the Moorish style which characterizes some monuments which were built after the Christian Reconquista of Spain, the finest example being the Real Alcazar of Seville.
The image used as background for this page shows a detail of the side wall of the building. 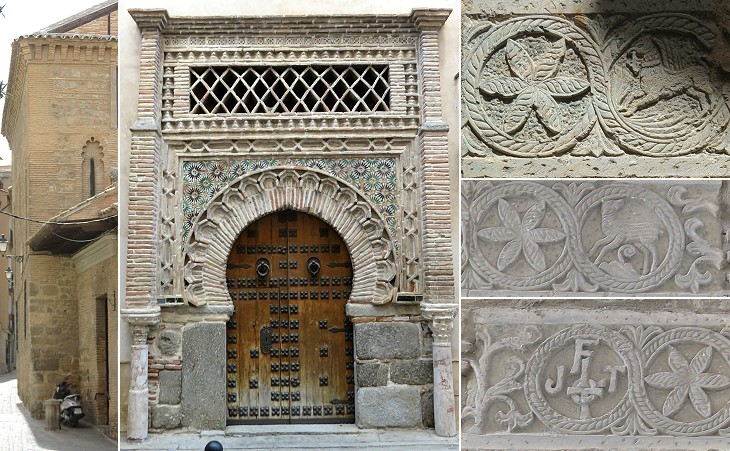 Inside, the streets or rather wynds, are irregular, ill-paved, steep, and tortuous; but such intentional intricacy and narrowness rendered them easy to defend when attacked, and kept them cool in summer, however unpopular to travellers not in search of the picturesque. The houses are massive and Moorish-like, for the city was 350 years under their enlightened dominion. Ford
Actually most of the medieval buildings of Toledo, although having a Moorish aspect, were built after the Christian conquest and some of them were embellished with Roman and Visigothic materials. 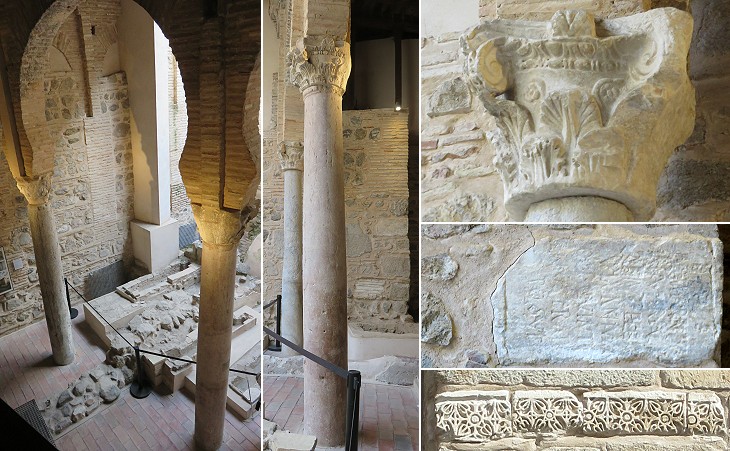 This church stands on the site of a mosque which in turn stood on a Visigothic church (see a decorated pillar of that building). The mosque was built or redesigned in 1041 as indicated in an inscription. It was turned into a church in 1159 which shows that Muslims retained their mosques for a period of time after the Christian conquest of the town. 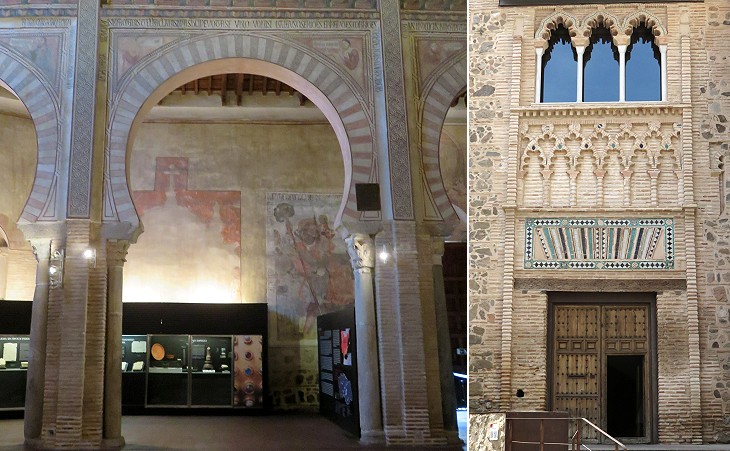 In San Roman is some Moorish work and inscriptions, with singular arches and ancient pillars. Ford
The church was consecrated in 1221 and has mural frescoes and some Arabic as well as Latin painted inscriptions. It houses Museo de los Concilios y de la Cultura Visigoda. Leocadia was cast down from the rock of Toledo (at the time of Emperor Diocletian): a chapel was raised on the site of her fall, in which many councils were held; during one of which, in 660, angels appeared and removed the stone from her sepulchre; she forthwith arose "clad in a mantilla' and informed the president San Ildefonso, that "her mistress lived through him". (..) The body, according to some churchmen, ascended to heaven, while others assert that when the Moors invaded Toledo a Fleming carried it off to Flanders. The corpse was rediscovered at Saint Ghislain, in 1500, when Philip I obtained a portion of it for the chapter of Toledo; the rest was removed by the relicomaniac Philip II when fearful that the heretics would conquer the Low Countries, and get possession of such a treasure as this. He received the remains at the cathedral in person, April 26, 1587.
Leocadia is to Toledo what Eulalia is to Merida. In the XIIIth century a mudéjar church was built on the site of the house where Leocadia was born. 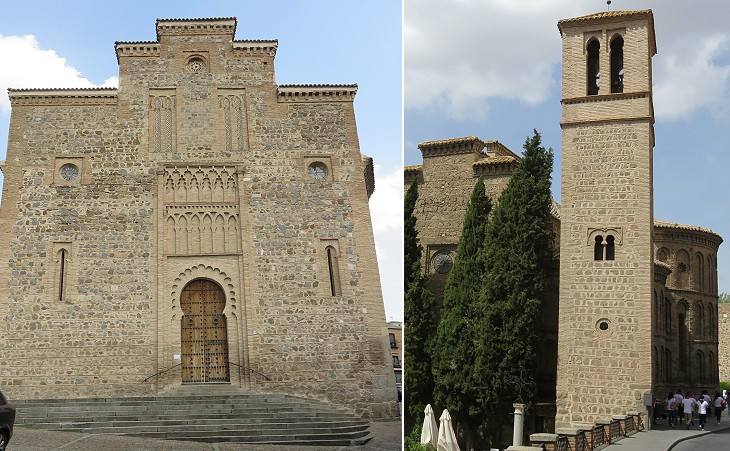 This is another church built in the XIIIth century. It was dedicated to Saint John the Apostle, a saint who is particularly venerated in Spain for his legendary intervention on the Christian side in a battle against the Moors, hence he is often referred to as Santiago Matamoros, Slayer of the Moors, and portrayed as a medieval knight, e.g. at Granada. This and other medieval churches of Toledo were restored in the XXth century with the aim of enhancing their original mudéjar features, with the unwelcome result of giving them a too-new appearance. 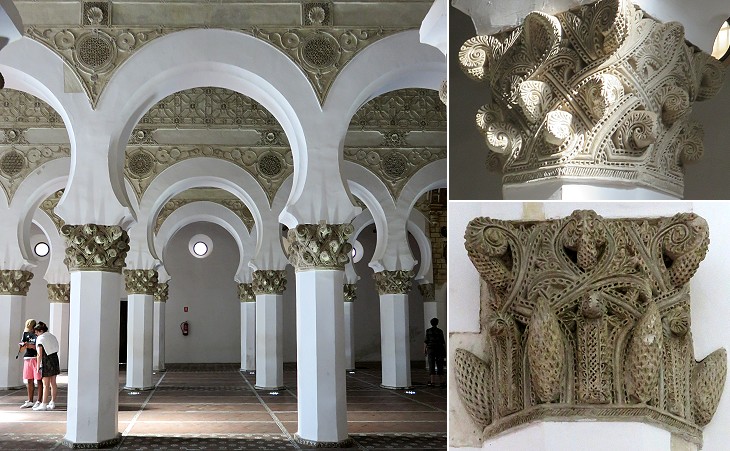 It is almost impossible to pass through the southern part of the town (where the Jewish quarter was situated) without lamenting the vicissitudes of human life; the heaps of earth, bricks, and tiles, present the mournful remains of houses, the situation of which they now occupy. Laborde
When Toledo was first taken by the Moors it was filled with Hebrews; (..) they, resenting the Gothic persecution, facilitated the progress of the Berbers. (..) The Jews of Toledo, when their Moorish friends seized their money, turned to the avenging Christian, and facilitated the conquest of the city, in 1085, by Alonso VI. (..) Descend by narrow lanes to the former Juderia, or Jews' quarter, in which two most singular synagogues yet remain, although sadly degraded. The first, now called la Santa Maria la Blanca in 1405, when the ferocious persecutor San Vicente de Ferrer goaded the mob on against the Jews, was converted into a church; so it remained until the French degraded it into a storehouse. The architecture deserves much notice; the ground plan resembles that of a basilica. Observe the three aisles divided by polygonal pillars, which support horseshoe arches, springing from bastard Gothic capitals; remark the circular patterns in the spandrels, the stars, chequer work, and engrailed Moorish arches. (..) The ceiling is said to be made from beams of the cedars of Lebanon (it opens in another window), and the soil below the pavement was brought from Mount Zion. Ford
The synagogue was built in the early XIIIth century. In origin the brick pillars and arches were not painted. Today the building houses temporary exhibitions and cultural events. 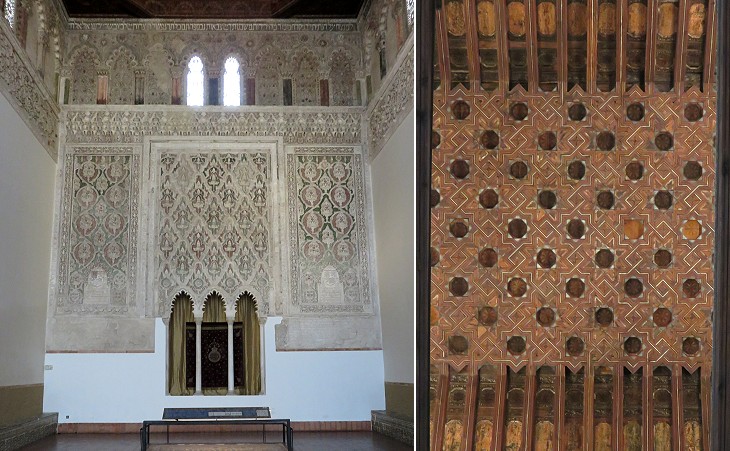 The other synagogue, although less ancient, is finer and better preserved; although consecrated to San Benito, it is called el Transito, from a picture of the death of the Virgin, which has disappeared during recent reforms. It was built in 1357, by Samuel or Simel Levi, treasurer to Don Pedro the Cruel, and in fact his Joseph, his Mordecai. His royal master, however, in 1360, being in want of cash, and knowing the value of a Jew's eye, first tortured and then killed poor Levi, seizing his money-bags; all this rather pleased the Spaniards, who hated a Hebrew, whose strictness in tax-gathering had rendered him unpopular. Ford 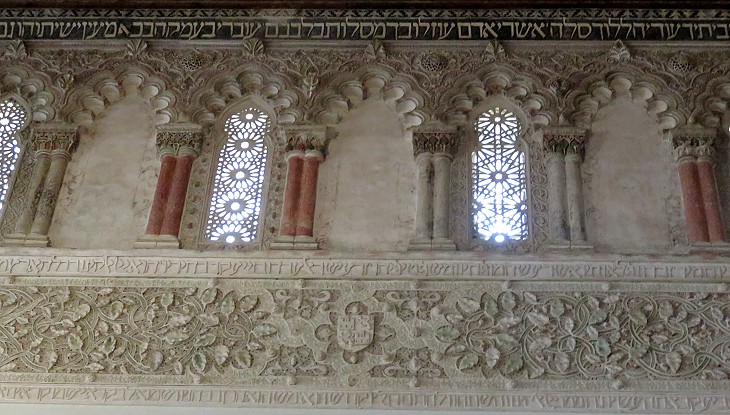 Sinagoga del Transito: decoration of the upper part of the walls

The upper parts, being out of reach, have escaped better, so observe, the honeycomb cornice, the rows of engrailed Moorish arches, and the superb artesonado roof. A broad band with foliage contains the arms of Leon and Castile, and is edged with the 84th Psalm in Hebrew characters, and a damaged inscription. (..) Isabella, in 1494, gave the building to the order of Calatrava: then the holy of holies was converted into an archive. Ford
Today the building houses Museo Sefardi, sefardim being the Jews who lived in Spain until 1492. 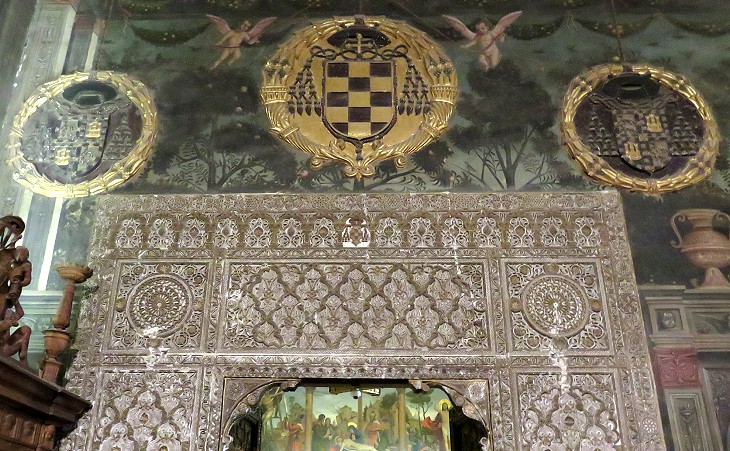 Cathedral - Vestibule of Sala Capitular with the coat of arms of Cardinal Francisco Ximenez de Cisneros, Archbishop of Toledo in 1495-1517

Next visit la Sala Capitular de Invierno, the winter chapterhouse: the ante-room is very Moorish. The square portal was executed by Bernardino Bonifacio. Ford
The Moorish element of this portal is the sebka decoration, i.e. a grid of diamond shapes which characterizes the Giralda of Seville and the Minaret of the Great Mosque of Rabat. 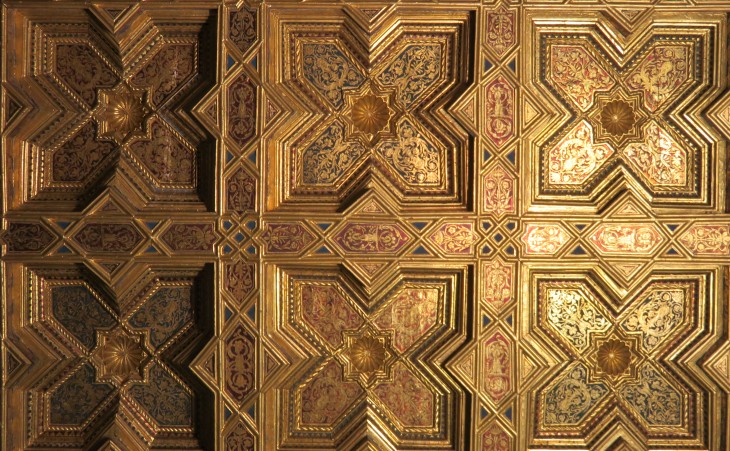 The superb artesonado ceiling was painted by Francisco Lara. Ford
The 1492 conquest of Granada and of the beautiful palaces of the Alhambra brought about a new interest for the Moorish style. This ceiling is only vaguely reminiscent of those at Granada, whereas another ceiling of the same period at Zaragoza has a more noticeable Moorish design. 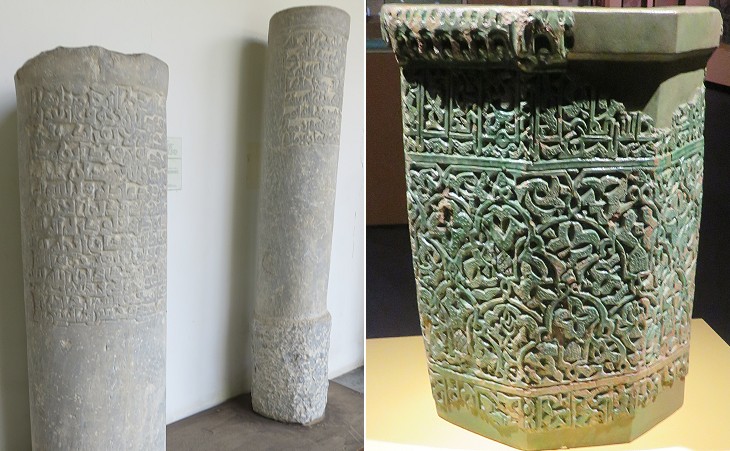 Move to Roman and Visigothic Toledo, Walls and Gates of Toledo or Gothic and Renaissance Toledo.