You may wish to see an introductory page to this section first.
The Qadisha valley is one of the most important early Christian monastic settlements in the world. Its monasteries, many of which are of a great age, stand in dramatic positions in a rugged landscape. Nearby are the remains of the great forest of cedars of Lebanon, highly prized in antiquity for the construction of great religious buildings.
From the UNESCO World Heritage List website. The valley was included in the list in 1998. 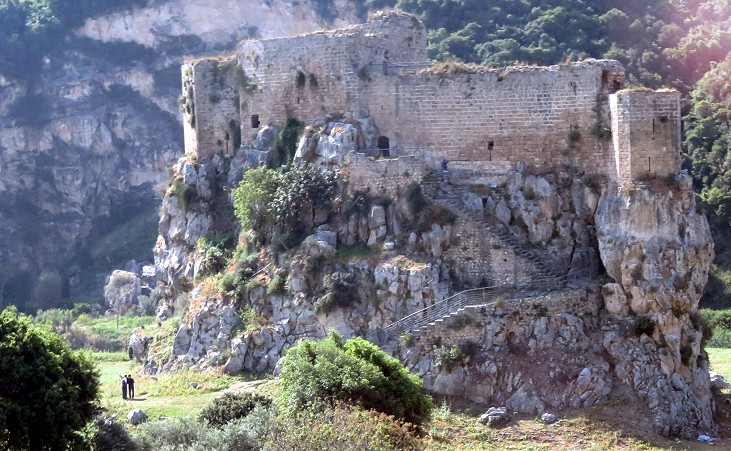 Msaylha Castle on the road from the coast to the valley

Near the entrance of this Vally stands a small Fort, erected upon a Rock perpendicular on all sides, the Walls of the Buildings being just adequate to the sides of the Rock, and seeming almost of one continued piece with them. This Castle is called Temsema, and commands the passage into the Vally.
Henry Maundrell - A Journey from Aleppo to Jerusalem at Easter - 1697
Between these hills we crossed the river Nar-el-Zehar on a bridge, and came to a very extraordinary rock about a hundred feet high, a hundred yards long, and twenty broad. There is a castle on it, and it is called Empsiles.
Richard Pococke - A Description of the East and Some Other Countries - 1745
Where the valley is scarcely ten minutes in breadth, a castle of modern construction stands upon an insulated rock; it is called Kalaat Meszabeha, its walls are very slight, but the rock upon which it stands is so steep, that no beast of burthen can ascend it. This castle was once in possession of the Metaweli (a Shia Muslim nomad tribe), who frequently attacked the passengers in the valley.
Johann Ludwig Burckhardt - Travels in Syria and the Holy Land - 1822
The castle was built in the XVIth or XVIIth centuries to control the coastal road between Tripoli and Beirut at a point where it made an inland detour. It might stand on the site of a previous fortification, but there is no clear evidence of it. 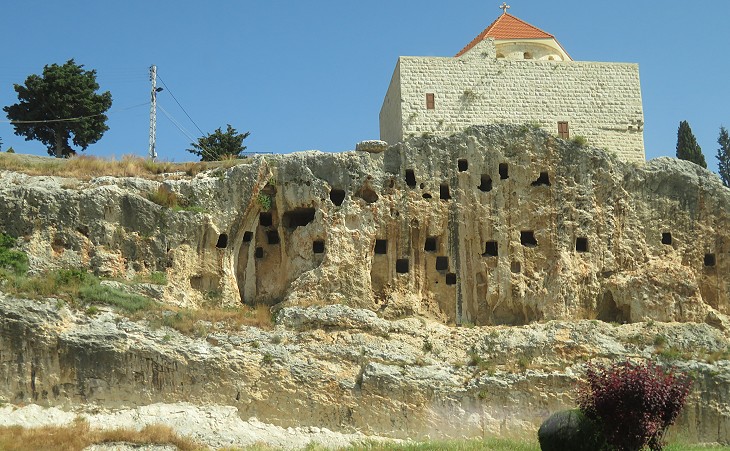 Saint John "al-Sheer" (on the Cliff) at Amioun, a village on the road to the valley

At the end of half an hour we passed the village Amyoun, the chief place in the district of El Koura, and the residence of Assaf Ibn Asar, the governor of that province; he is a Greek Christian. Burckhardt
Amioun is a very old settlement, the history of which can be traced back to the Palaeolithic, owing to 28 small caves carved in a rock. It is mainly Greek Orthodox, but after Amioun the valley becomes a Maronite district. At an hour and a quarter from the Cedars and considerably below them on the edge of a rocky descent lies the village of Bshirrai on the right bank of the river Kadisha. Bshirrai consists of about one hundred and twenty houses. Its inhabitants are all Maronites and have seven churches. (..) Bshirrai is surrounded with fruit trees, mulberry plantations, vineyards, fields of Dhourra (sorghum) and other corn though there is scarcely a natural plain twenty feet square. The inhabitants with great industry build terraces to level the ground and prevent the earth from being swept down by the winter rains and at the same time to retain the water, requisite for the irrigation of their crops. Water is very abundant as streams from numerous springs descend on every side into the Kadisha whose source is two hours distant from Bshirrai. Burckhardt 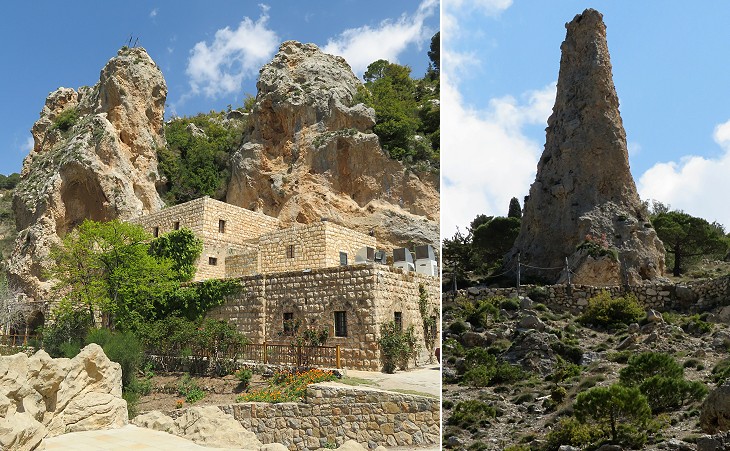 At half an hour from the village is the Carmelite convent of Deir Serkis, St. Sergius inhabited at present by a single monk, a very worthy old man, a native of Tuscany who has been a missionary to Egypt, India and Persia. Burckhardt
Khalil Gibran, a Lebanese-American writer who in 1923 acquired fame with The Prophet, a book of prose poetry fables, was born at Bcharré in 1883. The building which houses his tomb and a small museum was bought by his sister in 1931 under Gibran's request; it was the St. Sergius hermitage visited by Burckhardt. Higher up on the hill a stone obelisk houses a burial chamber which is dated VIIIth century BC. Behold, Assyria was like a cedar in Lebanon, with fair branches and forest shade, and of great height. And his top was among the thick boughs.
Ezekiel 31:3 - Modern King James version
Despairing of any other opportunity, I made another attempt this day to see the Cedars. Having gone for three hours across the plain of Tripoli, I arrived at the foot of Libanus; and from thence continually ascending, not without great fatigue, came in four hours and a half to a small village called Eden, and in two hours and a half more to the Cedars. The noble trees grow amongst the snow near the highest part of Lebanon; and are remarkable as well for their own age and largeness, as for those frequent allusions made to them in the word of God. Here are some of them very old, and of a prodigious bulk; and others younger of a smaller size. (..) After about half an hour spent in surveying this place, the clouds began to thicken, and to fly along upon the ground; which so obscured the road, that my guide was very much at a loss to find our way back again. We rambled about for seven hours thus bewildered, which gave me no small fear of being forced to spend one night more at Libanus. But at last, after a long exercise of pains and patience, we arrived at the way that goes down to Canobine a convent of the Maronites, and the seat of the patriarch. Maundrell 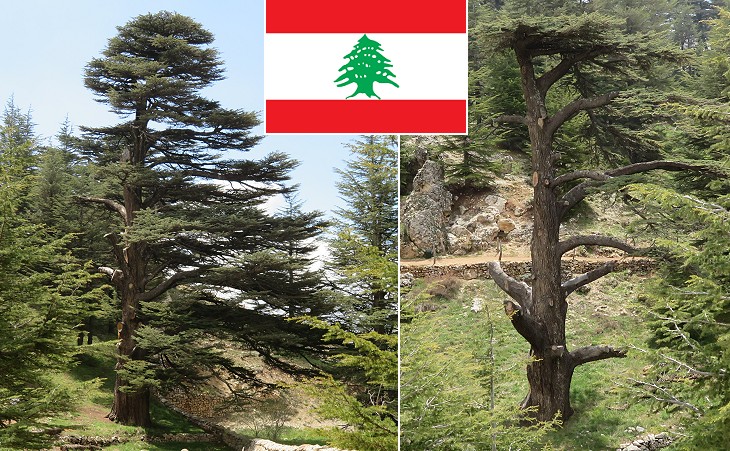 Cedar trees: (inset) flag of the Republic of Lebanon

From this convent there is a gentle ascent for about an hour to a large plain between the highest parts of mount Libanon. Towards the north east corner of it are the famous cedars of Libanon, they form a grove about a mile in circumference, which consists of some large cedars that are near to one another, a great number of young cedars, and some pines. The great cedars, at some distance, look like very large spreading oaks; the bodies of the trees are short, dividing at bottom into three or four limbs, some of which growing up together for about ten feet, appear something like those Gothic columns, which seem to be composed of several pillars; higher up they begin to spread horizontally. One that had the roundest body, tho' not the largest, measured twenty four feet in circumference, and another with a sort of triple body, as described above, and of a triangular figure, measured twelve feet on each side. The young cedars are not easily known from pines. I observed they bear a greater quantity of fruit than the large ones. The wood does not differ from white deal in appearance, nor does it seem to be harder; it has a fine smell, but not so fragrant as the juniper of America, which is commonly called Cedar and it also falls short of it in beauty. Pococke 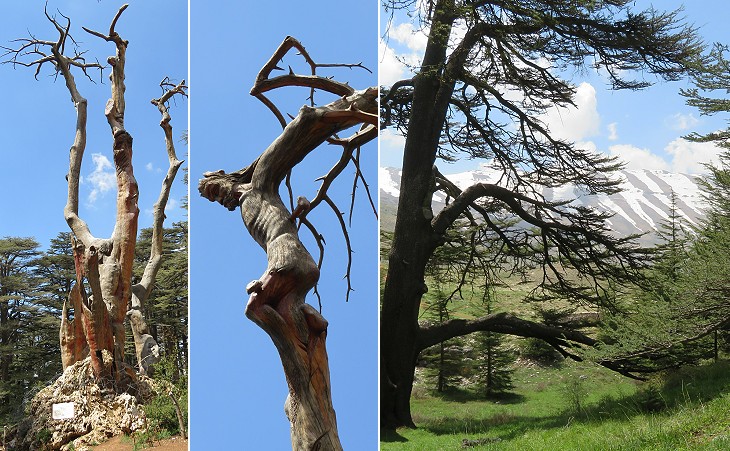 (left) A dead cedar with sculptures by Rudy Rahme; (right) Mount al Makmel from the Cedar Forest (see another view in the introductory page)

I left my guide on the small plain and proceeded to the right towards the Cedars which are visible from the top of the mountain standing half an hour from the direct line of the route to Bshirrai at the foot of the steep declivities of the higher division of the mountain. They stand on uneven ground and form a small wood. Of the oldest and best looking trees I counted eleven or twelve; twenty five very large ones; about fifty of middling size and more than three hundred smaller and young ones. (..) The trunks of the old trees are covered with the names of travellers and other persons who have visited them; I saw a date of the seventeenth century. The trunks of the oldest trees seem to be quite dead; the wood is of a gray tint. Burckhardt
The Christians of the several denominations near this place come here to celebrate the festival of the transfiguration, and have built altars against several of the large trees, on which they administer the sacrament. (..) From this plain on the mountains, we ascended about three hours up to the very highest summit of mount Libanon, passing over the snow, which was frozen hard. These mountains are not inhabited higher up than the Carmelite convent, nor all the way down on the east side, which is very steep, and a barren soil. Pococke 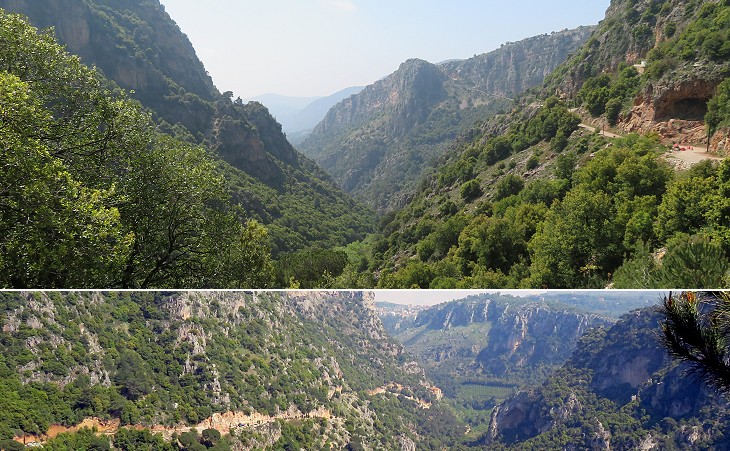 (above) The valley seen from the Monastery of Saint Anthony of Qozhaya (St. Anthony the Great); (below) the road to the Monastery

The valley appeared as if it was shut in on every side by high pointed rocky mountains, almost covered with wood. The river Abouali rushes through it with a great noise, but is so covered with trees, that it is seen in very few places. We went almost half round the valley, and turning to the left, came to the Maronite convent of St. Antony. Pococke 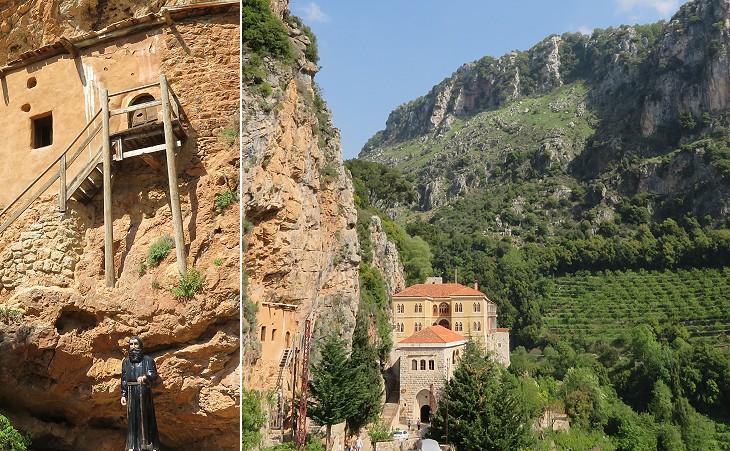 (left) The old monastery; (right) the old and the new monastery

The convent is almost all cut out of the rock. (..) They bury the monks in a vault above ground in their habits, in which they appear like skeletons. (..) This place is famous for excellent wine, which they preserve, as they do in all these parts, in large earthen jars, close stopped down with clay, but being sent to distant places, it receives a strong flavour which is disagreeable. Pococke
Three hours distant from Kanobin at the convent Kashheya is a printing office where prayer books in the Syriac language are printed. (..) Nothing can be more striking than a comparison of the fertile, but uncultivated districts of Bekaa and Baalbec with the rocky mountains in the opposite direction where, notwithstanding that nature seems to afford nothing for the sustenance of the inhabitants, numerous villages flourish and every inch of ground is cultivated. Burckhardt The cave which was used as a church

The large church is a grot, and so are several other parts of the convent. (..) I saw the monks in their church, standing four and four at two square desks, chanting their hymns alternately, and leaning on crutches as some ease during the long time they are obliged to be at their devotions. Pococke 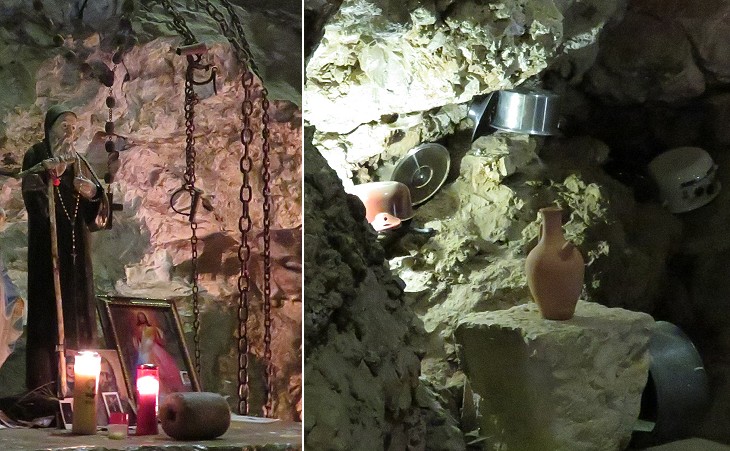 Ex-voto: (left) old chains offered by those who suffered from mental disorders (the image used as background for this page shows a detail of them); (right) more recent cooking pans offered by women seeking pregnancy

In a dark part of this grot they discipline mad people; this place being, as they say, famous for miraculously curing the disorders of the brain. The patients are commonly brought to their senses in three or four days, or a week, and rarely continue longer, and even sometimes are cured in their way to the convent, according to thieir account. Pococke 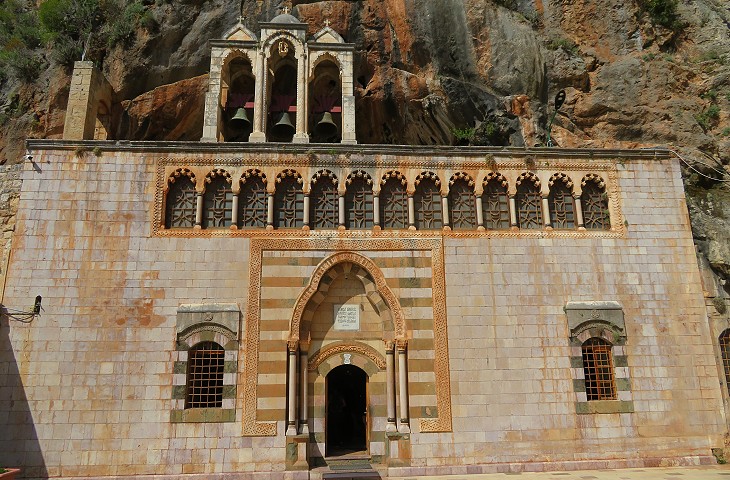 The modern church of the monastery

(At the Canobine convent) there were also hanged in the wall two small bells, to call the monks to their devotions: a privilege allowed no where else in this country; nor would they be suffered here, but that the Turks are far enough off from the hearing of them. Maundrell