- Teruel
(left - Mosaic at Italica; right - decoration at the Alcazar of Seville)

Views from Mirador de los Mansuetos: (above) the old town; (below) Torre de San Martin and Seminario Conciliar, a huge XVIIIth century building which was totally destroyed in January 1938 during the Spanish Civil War. It was rebuilt in 1948-1953

Teruel, situated in Aragon, is the chief town of its province. (..) Seen from afar, with its old walls, gates, and Aragonese towers, the city has an imposing look.
Richard Ford - A Handbook for Travellers in Spain - 1855
The development in the 12th century of Mudéjar art in Aragon resulted from the particular political, social, and cultural conditions that prevailed in Spain after the Reconquista. Geographically, Aragonese Mudéjar art can be found mainly along the Ebro river valley and its southern tributaries in the northeast Iberian Peninsula. From a historical point of view, this artistic genre belongs to a lengthy period that lasted from the 12th to the 17th century. Mudéjar art is an artistic phenomenon that does not belong entirely to the cultures of Western Europe or Islam. Rather, it constitutes (..) a new form of artistic expression. This art, influenced by Islamic tradition, also reflects various contemporary European styles, particularly the Gothic. The inscription in the World Heritage List comprises ten religious and secular monuments in the provinces of Teruel and Zaragoza. (..) At Teruel they include: the tower, roof, and cimborio (lantern tower) of the Cathedral; the tower and church of San Pedro; the church tower of San Martín; the church tower of El Salvador.
From the criteria endorsing the 2001 inclusion of Aragonese Mudéjar in the UNESCO World Heritage List.

Teruel bears for arms its river, a bull (Toro, Teruel), and a star above it. Ford
Plaza del Torico was the market square of the medieval town. It was redesigned in the early XXth century. Teruel was founded in 1171 by King Alfonso II of Aragon to strengthen the defence of the southern part of his kingdom by increasing its Christian population. Teruel was situated along the road between Zaragoza and Valencia which in that period had fallen into the hands of the Almohad rulers of Morocco, who pursued an aggressive policy aimed at reconquering the northern part of Spain. 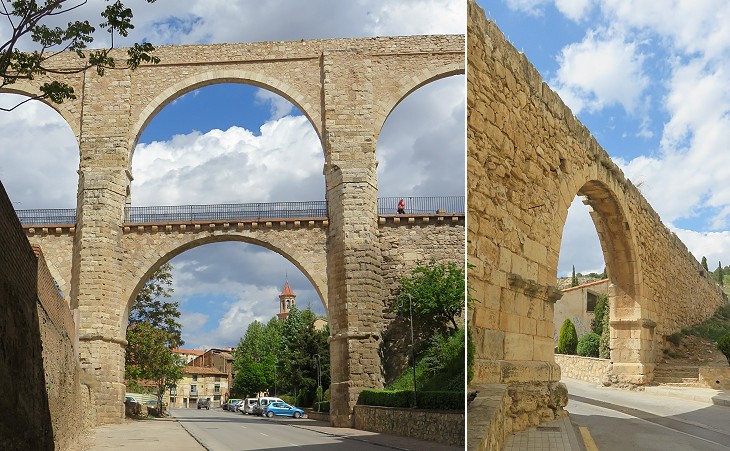 Look carefully at the aqueduct, los Arcos de Teruel, which is worthy of the Romans in form, intention, and solidity. It was raised in 1555-1560 by a most skilful French architect named Pierre Vedels. Ford
You may wish to see some Roman aqueducts in Spain at Merida, Segovia and Tarragona and Pont-du-Gard in France. 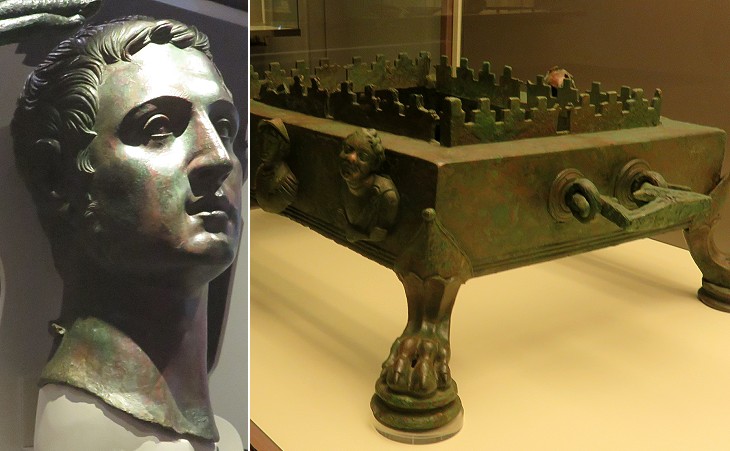 Teruel does not have a Roman past, but a number of Roman works of art and artefacts have been found in its province. Some of them are in Madrid, while others are housed in a museum at Teruel. Some historians have suggested the presence of a Muslim settlement at Teruel in the Xth century, but archaeological evidence indicates that it was limited to a defensive tower. The museum of Teruel houses some exhibits showing the Arab presence in the province. Of particular interest is a decorated vessel donated by Abd al-Malik ibn Jalaf to his wife Zahra. He was the Emir of Albarracin, one of the small taifas (kingdoms) into which Muslim Spain was split after the fall of the Caliphate of Cordoba in ca 1031.

The interior of the town is solid and gloomy. The antiquarian should notice the Moorish watch-tower San Martin (..) and the other tower called the Lombadera (aka Bombardera), to the N. of the city. Ford
Teruel retains some of the towers which strengthened its medieval walls. That of Ambeles was built in the late XVth century and its star-shape and the presence of a line of slightly projecting semicircular stones reflect changes in the design of fortifications which occurred after the development of cannon warfare (you may wish to see the fortress of Civita Castellana). 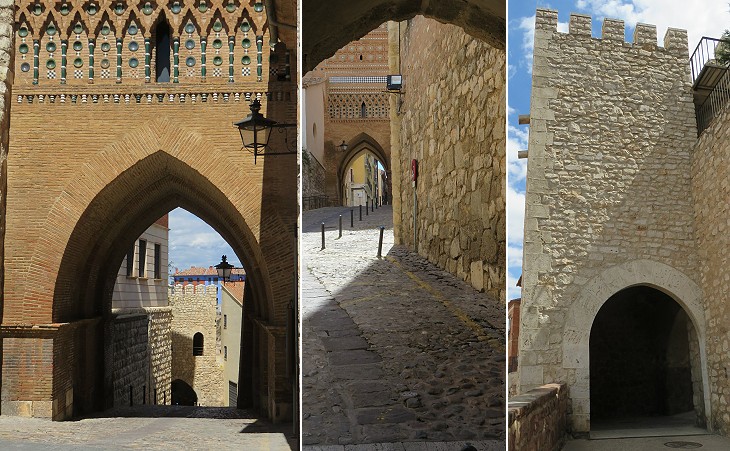 Torre de San Martin and Portal de Daroca, a nearby gate of the town 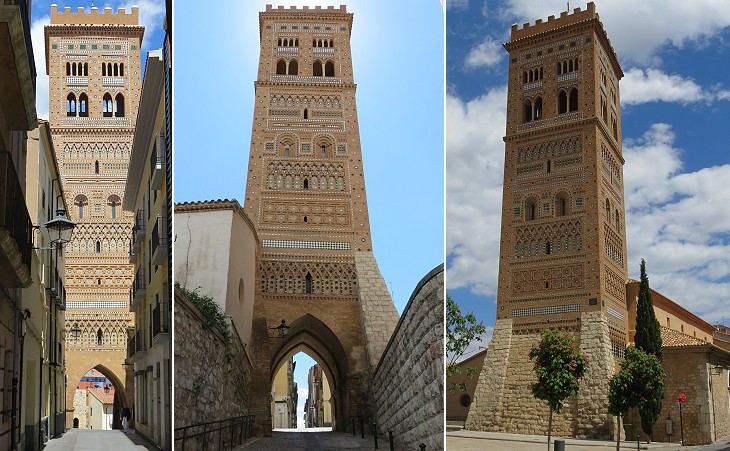 The tower, owing to its height and location, had a commanding view over the surrounding countryside. It is made up of two buildings one inside the other. The external one with its very rich decoration was built in 1315. In 1238 King James I of Aragon had conquered Valencia so Teruel was no longer under threat of a Muslim attack and resources could be employed for the decoration of the town. 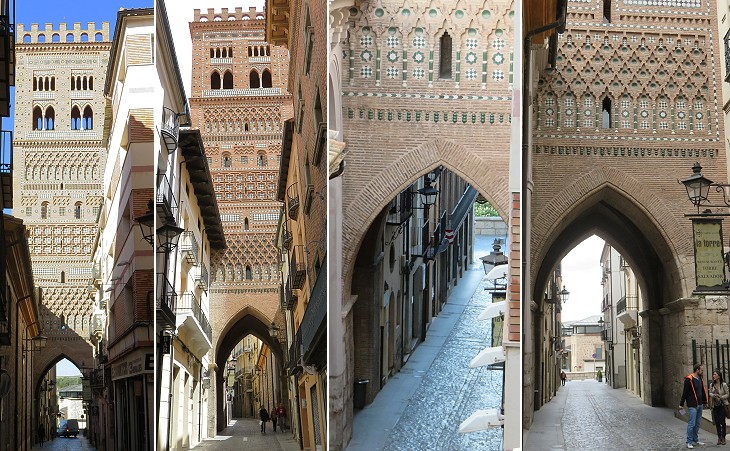 This tower is located near the southern end of the town and it had a defensive function similar to that of San Martin. Bell towers are the key buildings of the Aragonese Mudéjar also at Zaragoza where however ceramics were less utilized. 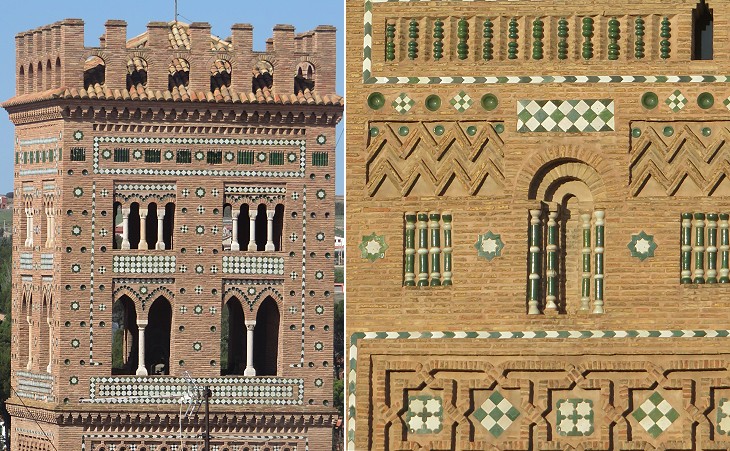 The Mudéjar architecture of Aragon is, on account of the formal solutions adopted and the techniques and materials of construction employed, a specific and extraordinary legacy. (..) Decorative motifs from a great variety of traditions can be seen in these monuments. (..) Thus, we can identify in these Aragonese monuments the rhombus-shaped mouldings (sebqa), stars, angled and interlaced brick friezes, arrows, lobed and multi-grooved arches. (..) Present until the early 17th century, it is characterized by an extremely refined and inventive use of brick and glazed tiles in architecture. UNESCO 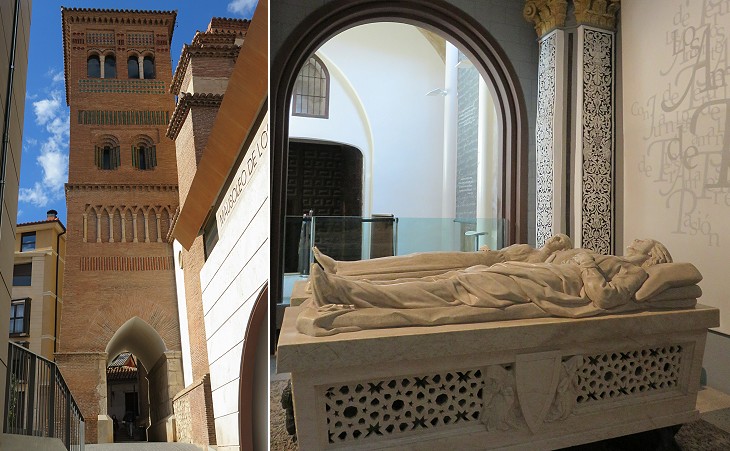 In the Parroquia de San Pedro (..) all those whose hearts have ever been touched by the tender flame should visit the cloisters, in which are preserved the remains of the "lovers of Teruel," so familiar to readers of Spanish plays. The names of these Peninsular Heloisa and Abelard were Isabel de Segura and Juan Diego Martinez de Marcilla. They died in 1217, and their skeletons were brought here in 1708. Ford
The story goes that young Diego left to become a soldier and make his fortune, promising to return to Isabel five years later. After this time had elapsed and Isabel had received news of his death in battle, she married. But Diego had not died and returned, with wedding bells ringing, in search of his beloved, who denied him a kiss. He died of a broken heart. The next day at his funeral Isabel gave him a kiss she denied him while he was still alive before dropping dead on her beloved's body.
From a brochure of the Teruel Tourist Office.
The statues of the couple were made in the 1950s by Juan de Avalos, a leading Spanish sculptor. 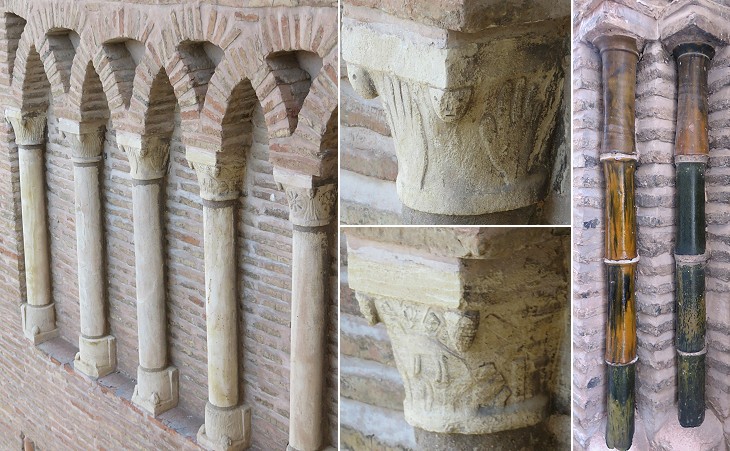 A prevalence of green tints can be noticed in the ceramic decoration of the bell towers of Teruel. Green was obtained by using a copper oxide. The metal was widely available in Spain since antiquity and cuerda seca pottery was characterized by the use of green. 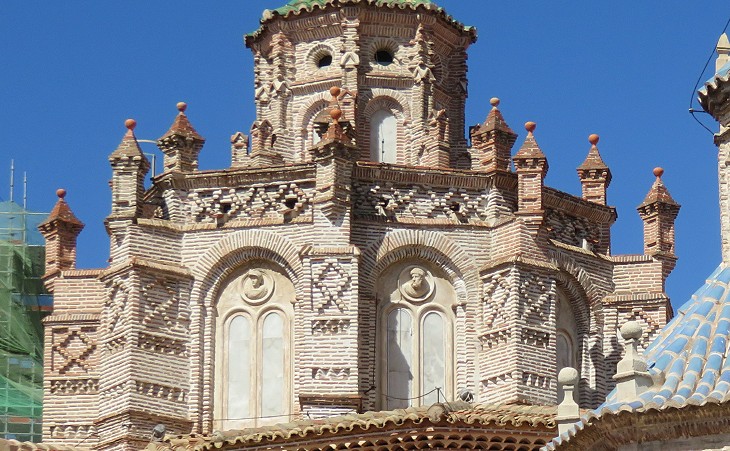 Cimborio (lantern tower) of the Cathedral

The cathedral was raised to a see in 1577. Ford
The mudéjar decoration of the Renaissance lantern tower does not have glazed tiles, but an elaborate brickwork based on sebka, a grid of diamond shapes. Brickwork is a key feature of the mudéjar of Castile.