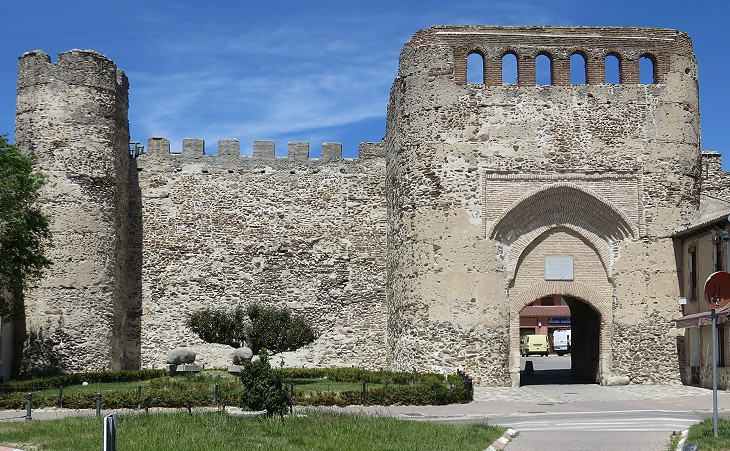 XIIth century walls of the town

March 10. This morning we passed over a bridge, and soon after I caused the carriage to stop, and went on horseback to see the castle of Coca, which is a very large square edifice, of two stories in height, entirely built of bricks, the masonry of which is extremely neat: it belongs to the counts of Alcala, and is encompassed with a dry ditch: the walls are embattled, and a turret rises from the center. It is built near the town of the same name, which is walled, and as much ruined as Olmedo.
Richard Twiss - Travels through Portugal and Spain, in 1772-1773
The horseman will do better to proceed from Valladolid to Olmedo in the diligence, and then ride across the hills to Segovia. A dreary waste of sand and umbrella-headed pine-groves, a bad road, an arid lonely country, are rendered more wretched by villages gutted by the French and never since repaired. Coca lies between the Eresma (a river which crosses Segovia) and Volloya rivers.
Richard Ford - A Handbook for Travellers in Spain - 1855 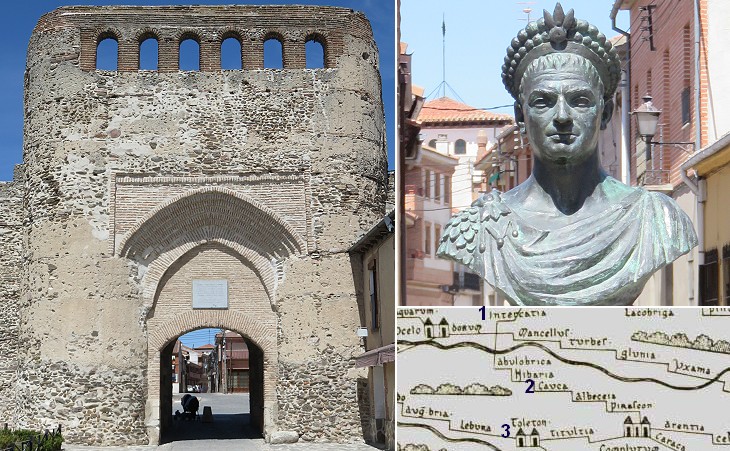 (left) Puerta de la Muralla (Main Gate) with an inscription stating that the town was the birthplace of Emperor Theodosius; (right-above) modern (ca 1990) bust of the Emperor; (right-below) "Tabula Peutingeriana" a Vth century AD map of the roads of the Roman Empire showing: 1) Intercatia, 2) Cauca and 3) Toletum

Coca was anciently a considerable place, but was destroyed, with twenty thousand inhabitants, after a long siege, by Lucullus (Roman consul in 151 BC). It is said the emperor Theodosius the Great was born here. Twiss
Cauca, today's Coca, is recorded as a Roman municipium in the IInd century AD and it is mentioned with Intercatia in a bronze inscription. It was still a relatively important settlement in the following centuries and according to a Vth century chronicle it was the birthplace of Emperor Theodosius. It was conquered by King Alfonso VI of Castile in 1086, one year after the fall of Toledo. The town walls, of which only a small section survives, were built in the next century. 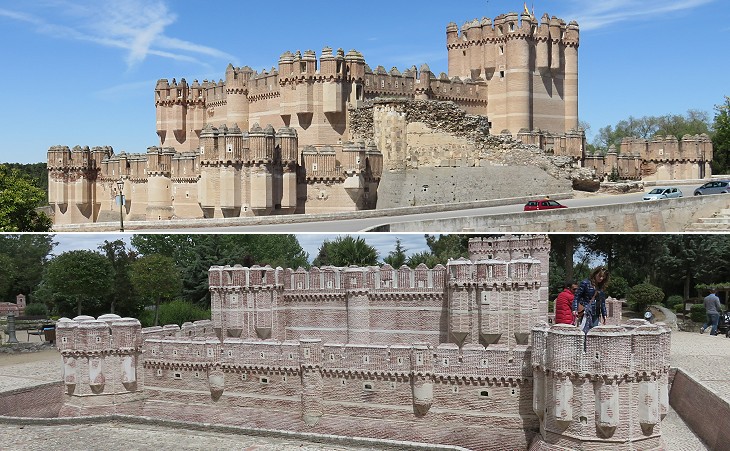 Posada de la Cruz: the host does the honours of the castle, a grand specimen of a genuine Castilian castle of the Gothic mediaeval period. Ford
The location of the castle is rather odd. It was built on flat land rather than on a hillock, it thus required a very wide and deep moat. Its construction began in 1453; at that time the only territory in Muslim hands in the Iberian peninsula was the Kingdom of Granada. In no way it could threaten this remote town in the northern tableland. When the castle was completed in 1493 even Granada had fallen into Christian hands. Views of the moat and of its counterscarp (outer side)

The castle was built at the initiative of Alonso de Fonseca y Ulloa, Archbishop of Seville, who acquired the fiefdom of Coca in 1451. Today the town has 2,000 inhabitants; perhaps in the XVth century its population was higher, but not so much to justify the construction of a state-of-the-art fortress to protect the Fonseca from a rebellion of their subjects. There were no military events associated with the castle during the War for the Castilian Succession (1475-1479) which ended with the recognition of Isabella I as Queen of Castile. 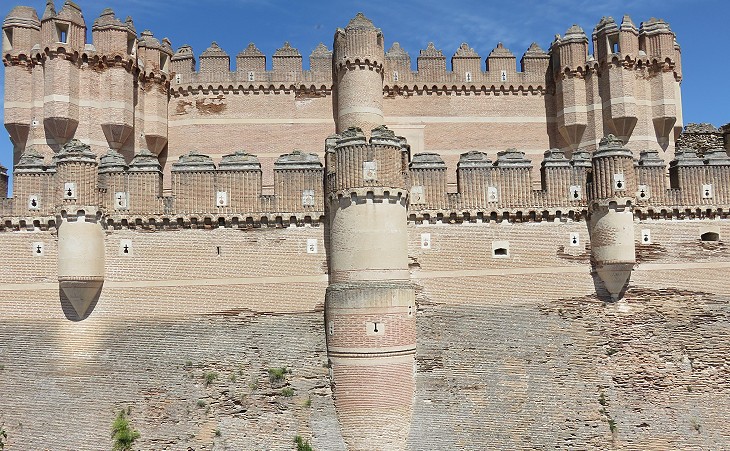 Walls of the outer and inner castles

Notwitstanding its military aspect the castle was a countryside palatial residence of the Fonseca, a family whose members held high positions in the clergy, in particular at Seville and Toledo well into the XVIth century. A branch of the family had possessions in Portugal and a palace in Rome.
The population of Olmedo, (a few miles from Coca) was once considerable, but is now reduced to two thousand inhabitants, who carry on no other traffic than what is derived from their brick-kilns.
Alexandre de Laborde - A View of Spain - translated into English for Longman, Hurst, etc. 1809
Based on the account by Laborde and other travellers brick-making was very important for the economy of the area which explains the extensive use of bricks also for decorative purposes. 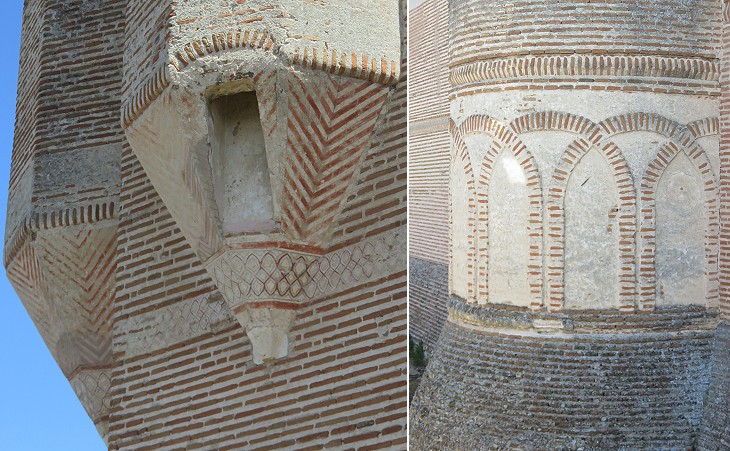 Mudéjar decorative patterns: (left) a diamond grid decoration which derives from that of La Giralda of Seville (also in the image used as background for this page); (right) interlacing arches which are typical of many Moorish monuments, e.g. the Great Mosque of Cordoba

Mudéjar is the term used to indicate the Moorish style which characterizes some monuments which were built after the Christian Reconquista of Spain, the finest example being the Real Alcazar of Seville. In this castle however the links with the original Moorish style are rather tenuous. They are more evident at Puerta del Sol, a gate of Toledo, another mudéjar military building. 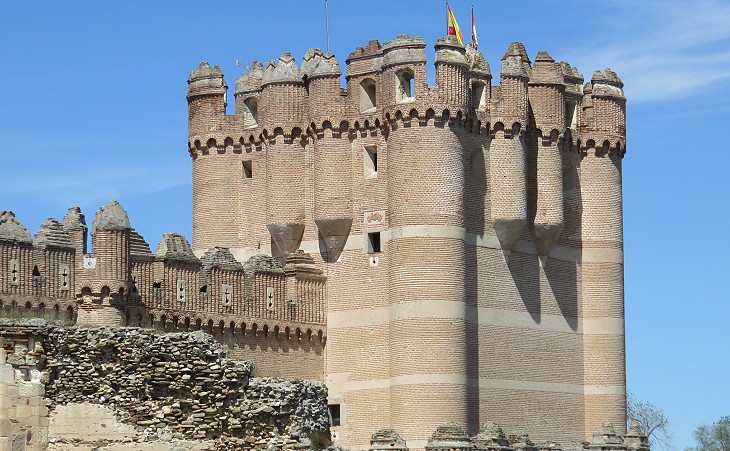 Torre del Homenaje, aka Torre Mocha (trimmed, because it was partially destroyed)

Observe the projecting balistaria (artillery emplacements), bartizans (overhanging turret, see that at Senglea), the angular turrets of the great donjon-keep, la Torre Mocha. The superb towers rise like the Alcazar of Segovia; the barbican framework is remarkable. Ford
There are many alcazaba (Arab fortresses) in Spain, e.g. those at Almeria and Antequera, but they were built prior to the development of cannon warfare and their design is different from that of Castillo de Coca. 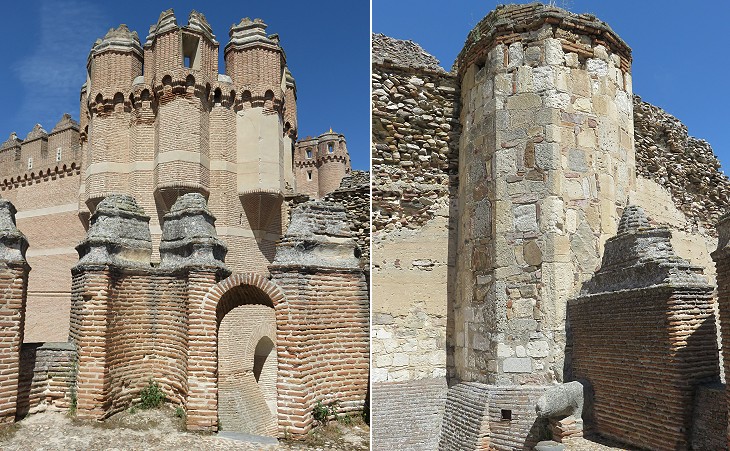 (left) Brickwork; (right) ancient stones, almost the only evidence of the Roman past of Coca

This palatial fortress of the old Fonsecas remained perfect, used as a state prison, until visited by the French invaders; the superb courtyard, with corridors and azulejos, was taken down in 1828 by the administrator of the present owner, the Duke of Alba, to be sold for the materials! since then the ruins have been used as a quarry and to mend roads! Ford 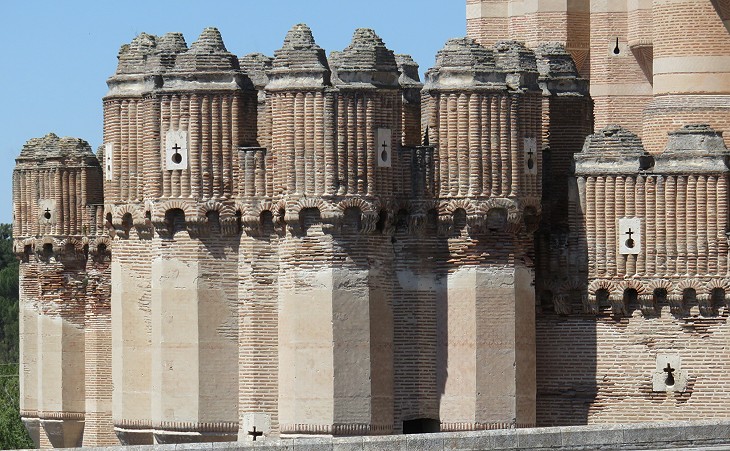 The castle was acquired by the Spanish State in 1926, In 1954-1958 it was thoroughly restored in order to use it as a school of the Ministry of Agriculture. The restoration, similar to other such initiatives in Spain, went too far in rebuilding all the towers and turrets of the castle, thus depriving it of its venerable decay. 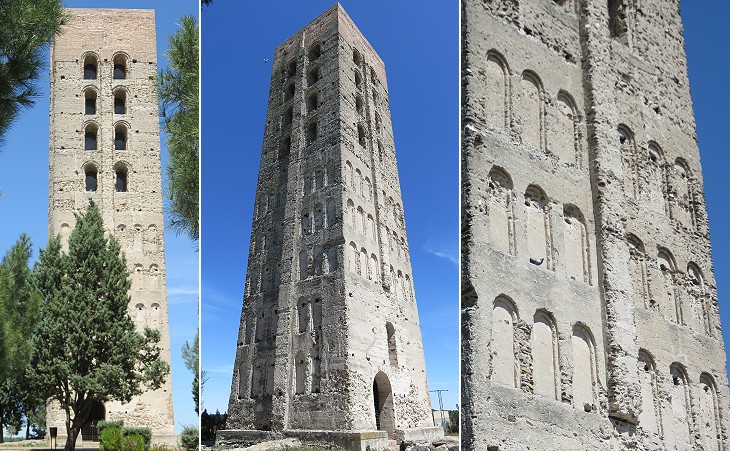 This very tall building which stands on a small mound outside the town was the bell tower of a lost church. It is first mentioned in 1247. It has some Romanesque elements, this style having particularly flourished at nearby Segovia.