- Roman Barcelona within the Walls
(left - Mosaic at Italica; right - decoration at the Alcazar of Seville)

You may wish to see an introductory page to this section first.
Barcelona is the capital of Catalonia; it is a large, well built populous city situate in a fine plain along the shores of the Mediterranean. (..) It is divided into the old and new town, separated from each other by a wall and a ditch, the old town inclosing the new.
Thomas Nugent - The Grand Tour - Vol. IV - 1749 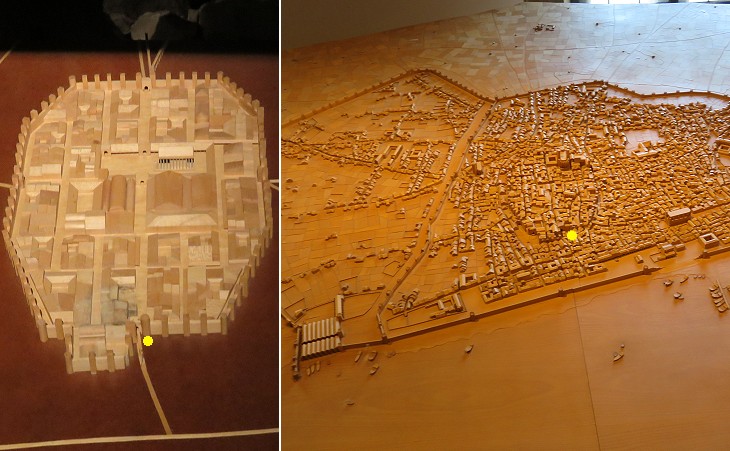 Museum of the City of Barcelona: models of late IIIrd century AD (left) and medieval (right) Barcelona; a yellow dot shows the location of Porta de Mar, the Sea Gate

The account of the original Inhabitants of Catalonia, and of the foundation of Barcelona, are, with the rest of the early history of Spain, involved in such a cloud of fables, that nothing satisfactory relative to those dark ages can be discovered. The Massilians (the inhabitants of Marseille) appear to have carried on a great trade, and to have been much connected with these provinces, Hamilcar Barcas (father of Hannibal) is said to have founded Barcino, now Barcelona; but the Carthaginians did not long keep possession of it, for we find their boundary fixed at the Ebro, so early as the end of the first Punic war. After the fall of the Carthaginian commonwealth, the Romans turned their whole attention towards Tarraco, and neglected Barcino though they made it a colony by the name of Faventia (the Favoured one). (..) The form of Barcelona is almost circular, the Roman town being on the highest ground in the center of the new one.
Henry Swinburne - Travels through Spain in the Years 1775 and 1776 in which several monuments of Roman and Moorish architecture are illustrated 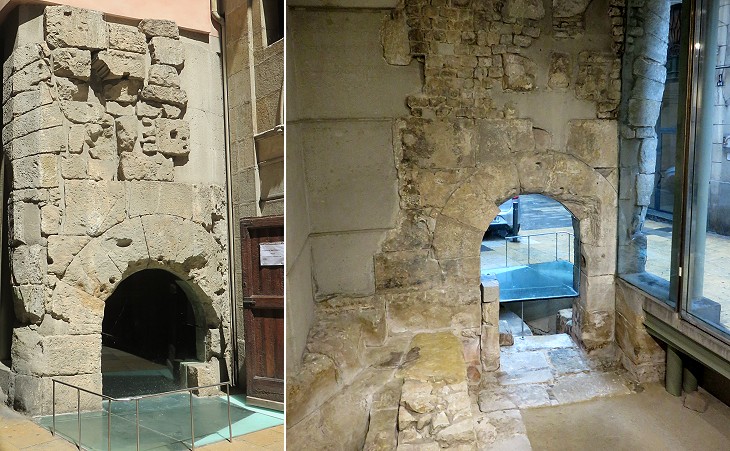 Lateral passage for pedestrians of Porta de Mar, the Sea Gate on the southern side of the Roman town

The ancient walls are still visible in several places, but the sea has retired many hundreds of yards from the port gates. Swinburne
These walls were erected towards the end of the IIIrd century AD shortly after those of Rome which were built in 275. The presence of an earlier line of walls is mentioned in an inscription which is dated IInd or Ist century BC. 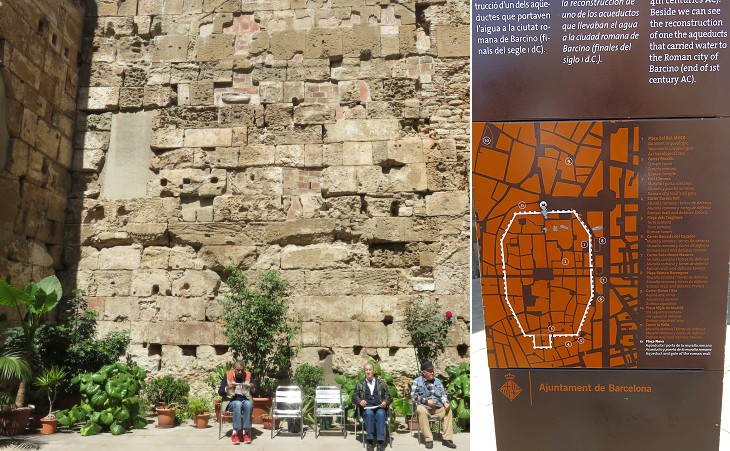 (left) Roman wall at Carrera del Correu Vell (Old Post Office); (right) one of the information panels showing the points of the Roman walls which are still visible; they are mainly on the eastern side

The premises of a social centre for the elderly near Porta de Mar house a stretch of the Roman walls which shows evidence of having been repaired and heightened at a later time.
The City of Barcelona has made a great effort to allow access or make visible parts of the walls and gates of the Roman town which were incorporated into later buildings. 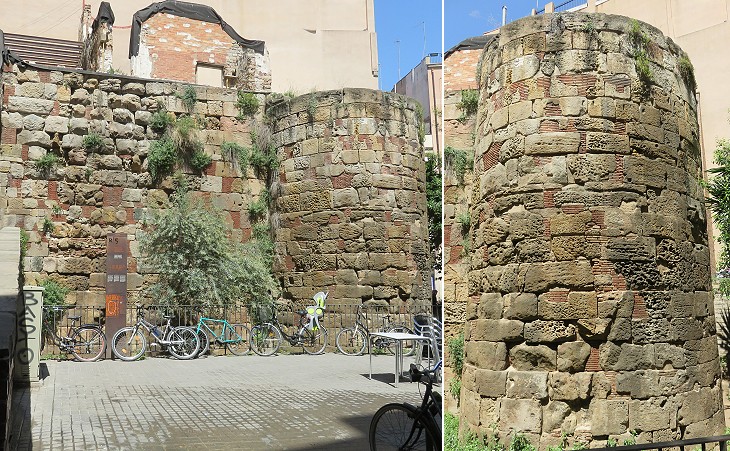 The circular tower stands at the south-eastern corner of the walls, a key position for the defence of the town. In general the towers had a square shape and they did not project much from the walls. 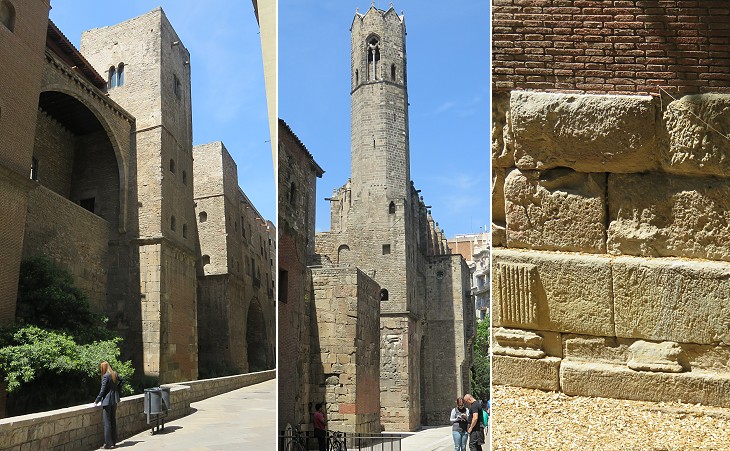 (left) Medieval towers standing above the eastern Roman wall; (centre) bell tower of the Royal Chapel of St. Agatha which also stands on the wall; (right) stones from a Roman building which were used for the walls

In the fifth century, the barbarians of the north of Europe, having pushed their conquests as far as this peninsula, divided it among the different nations that composed their victorious armies. Catalonia fell to the lot of the Goths under Ataulph (first husband of Galla Placidia), in 414. It remained under their dominion to the year 714, when it was forced to submit to the yoke of the Saracens; who (..) made themselves masters of all the coast, as far as the Pyrenees. Tarragona being now no better than a heap of ruins, Barcelona became imperceptibly the capital of the province. Lewis the Debonair (aka the Pious), son of Charlemagne, took it from the Moors in 800. From that period, the kings of France, governed Catalonia by appointing counts or vicegerents, removable at pleasure, till the government was rendered hereditary in the family of Wifred the Hairy (today he is regarded as a forefather of Catalonia). Swinburne
By and large the ancient Roman walls marked the limits of the town until the XIth century. The image used as background for this page shows the pedestal of a statue which was used in the construction of the walls. 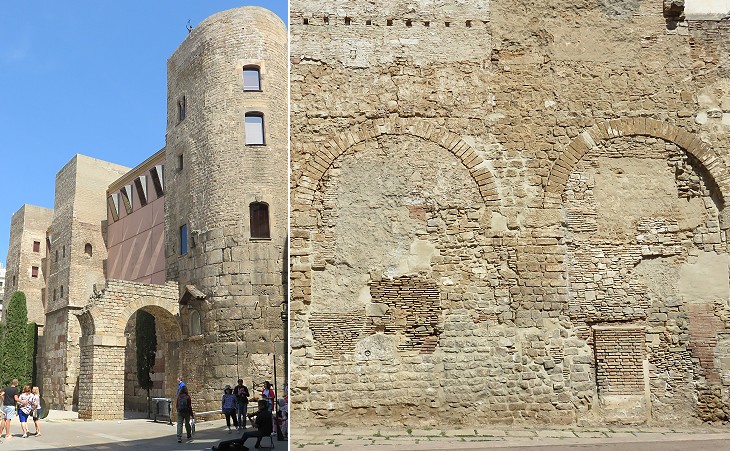 (left) An arch of the Roman aqueduct and medieval towers standing on Roman walls near the Cathedral; (right) arches of the aqueduct which were incorporated into later buildings

The water was carried to Barcelona by an aqueduct of which remains a very lofty arch at the entrance of the street of the Capellans; there is nothing remarkable in its structure; it is only very massive and solid. It seems to run towards the cathedral church and towards the remains of the temple which are still to be seen behind this church, and of which we shall presently speak.
Alexandre de Laborde - A View of Spain - translated into English for Longman, Hurst, etc. 1809 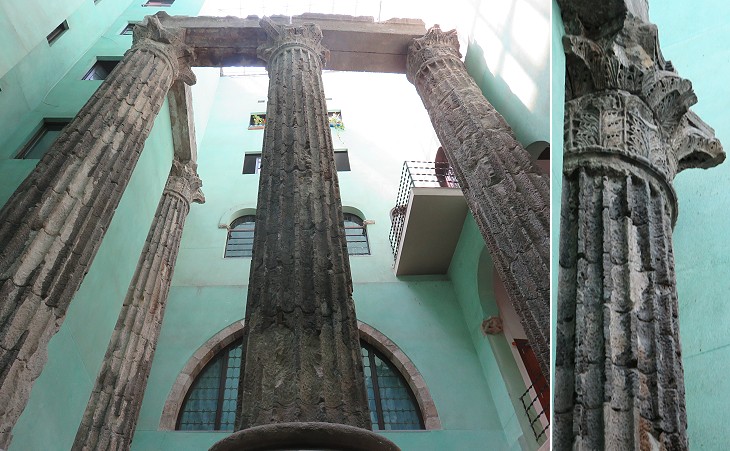 (left) Temple to Emperor Augustus; (right) detail of a column

Some interesting remains of a great and superb monument is found in Paradise street, behind the cathedral; it is the highest spot of the town, and centre of the ancient Barcelona. There remain six large fluted columns with capitals of the Corinthian order, of white marble; they are 29 feet 10 lines high, including the bases and capitals, and are supported by pedestals from 7 to 8 inches; the plinths of the pedestals are of the greatest simplicity. The capitals have been injured; but the remains show that they were wrought with taste and delicacy. These columns are shut up in a house, and cased in the thickness of the walls; they reach from the ground of the house higher than the second story; but we cannot trace them farther. Laborde
Barcelona was eclipsed by Tarragona, the Roman capital, and by Emporiae, a busy Greek sea-mart. (..) The principal Roman antiquities to be found in the oldest portion of the town are but fragments, having for 15 centuries been ill-treated by Goth, Moor, and Spaniard. (..) There are 6 columns in one house; 1 is seen in the Patio, 3 in a room, and 2 in an upper garret. These have been called the tomb of Hercules, Ataulfus, etc.
Richard Ford - A Handbook for Travellers in Spain - 1855
The columns were reassembled in the same location in 1956; the dedication of the temple to Augustus is not supported by specific evidence. 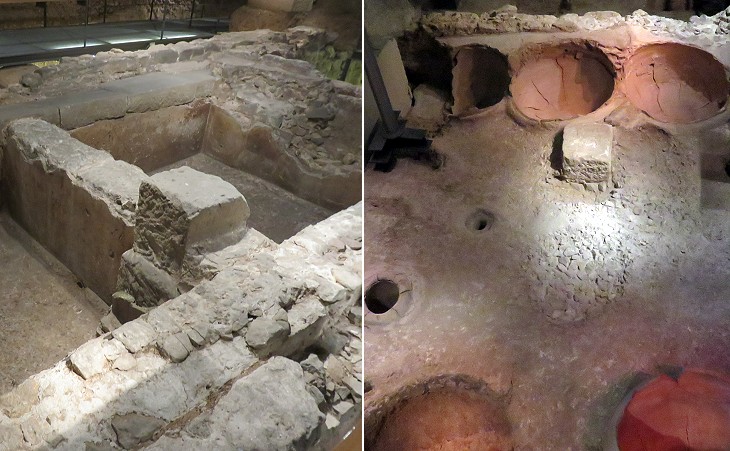 Museum of the City of Barcelona: workshops for salting fish (left) and wine-making (right)

Archaeological excavations under the Cathedral and the adjoining medieval buildings of Plaça del Rei have discovered interesting remains of Barcino and in particular a workshop district which sheds light on the economy of the town. The Spanish coast of the Mediterranean Sea was not as rich of fish as that along the Strait of Gibraltar, however it is likely that also Barcino was able to supply the tables of the wealthy Romans with garum, an expensive fish sauce. 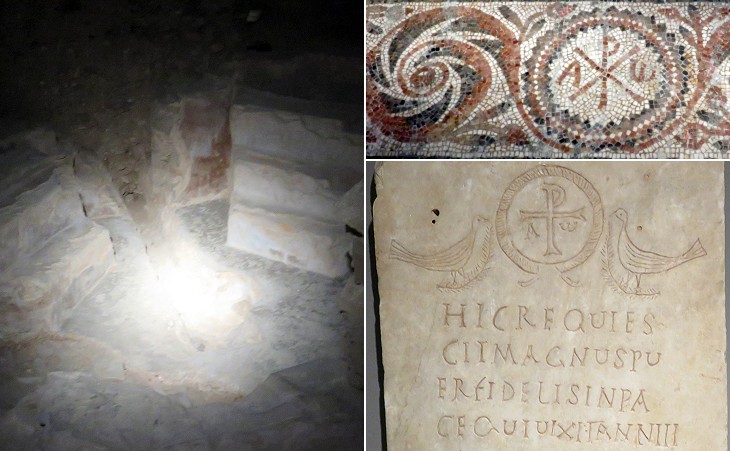 Museum of the City of Barcelona: (left) baptismal font; (right) gravestones with Christograms

The excavations brought to light also parts of an Episcopal complex of the IVth-VIIth centuries with a church and an immersion baptismal font with three steps representing the Trinity (see a beautifully decorated immersion baptismal font at the Museum of Bardo in Tunisia). The gravestones show that the church was used also as a cemetery in line with a practice which developed in the IVth century (see an Early Christian funerary basilica at Salona). 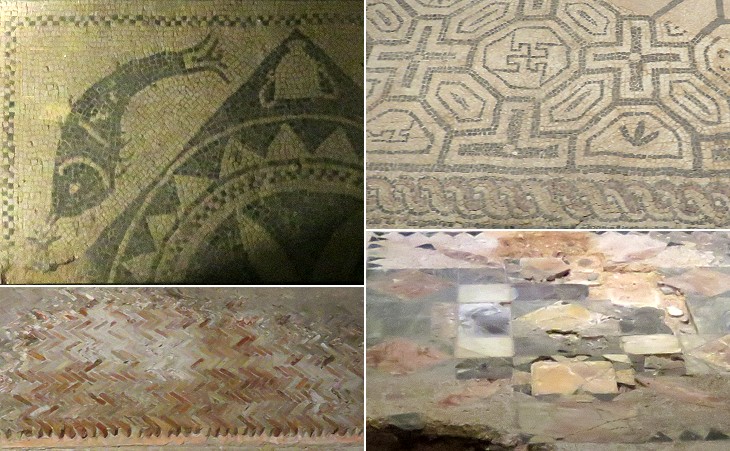 Museum of the City of Barcelona: types of floor in the archaeological layer: (above) mosaics; (below-left) "opus spicatum"; (below-right) "opus sectile"

Move to Roman Barcelona outside the Walls and Baetulo or to the Museums of Barcelona.